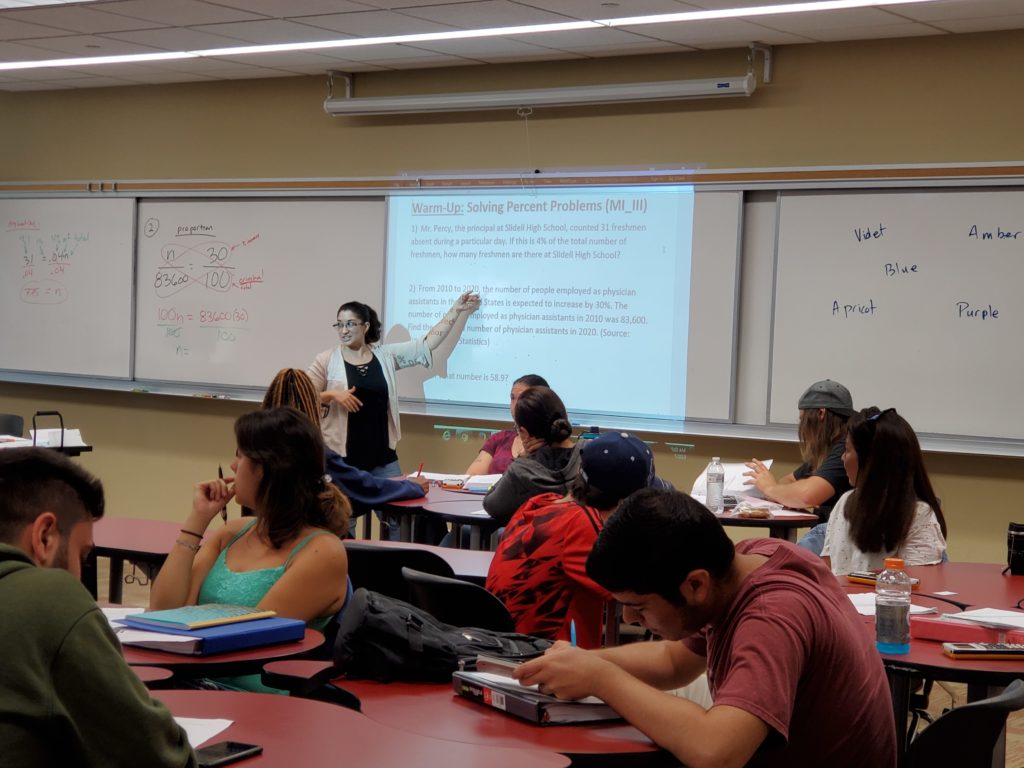 And one — in the San Diego area — closed Latino students’ achievement gaps in math. 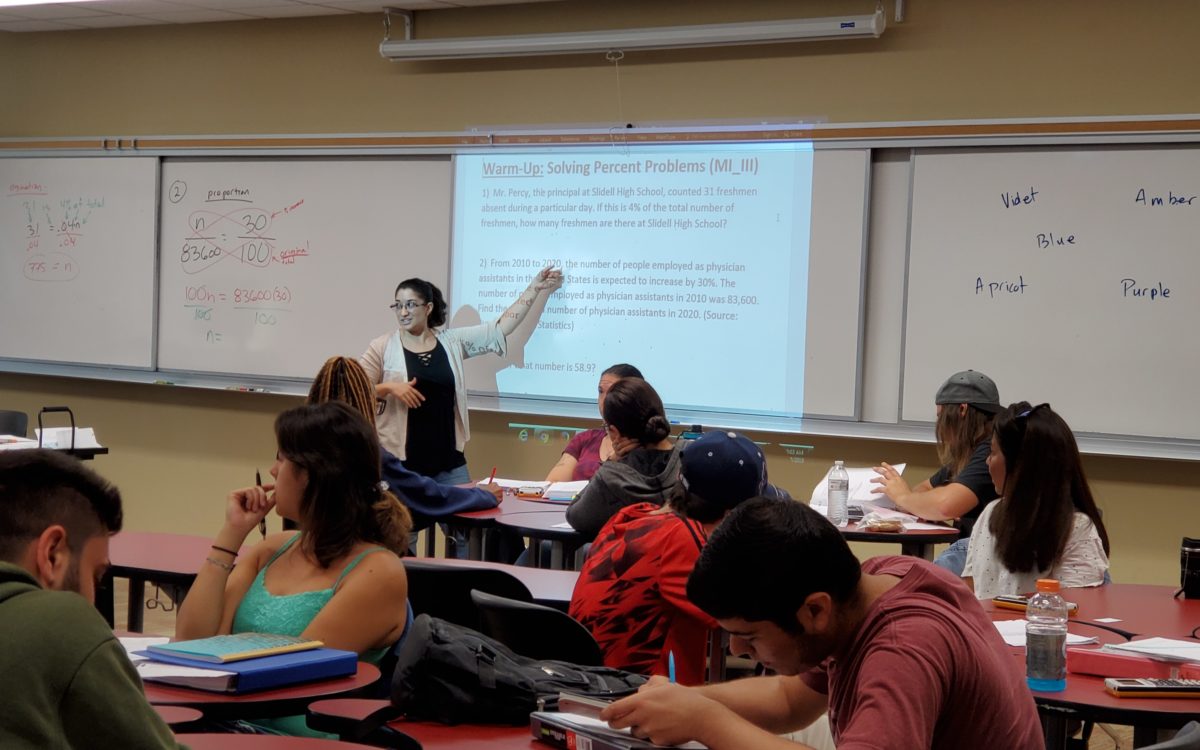 A San Diego area community college that moved early to eliminate remedial math courses is drawing lots of attention across the state for success in teaching math.

Not only are students at Cuyamaca Community College taking math classes that can transfer to four-year colleges, but Latino students are bucking a national trend by outperforming their white counterparts.

Cuyamaca, along with College of the Siskiyous in Northern California, were two of the first institutions in the 115-campus community college system to completely reform math programs in 2016 — a year before state lawmakers and Gov. Jerry Brown unanimously passed a law mandating community colleges to broaden access to transfer-level math and English courses and eliminate most traditional non-credit remedial classes. That mandate went into effect this fall.

“Students have much more capability than we give them credit for no matter what we say they can do,” said Tammi Marshall, chair of the math department at Cuyamaca.

Helping students succeed in basic arithmetic, she said, can be as simple as allowing them to use a calculator.

“Why is it so unbelievably important to us that somebody can do something by hand?” Marshall asked. “That seems unreasonable to me. In the real world, no one does these problems by hand.”

Cuyamaca and Siskiyous stand out in the community college system by having some of the most success with students who take math classes that transfer to a four-year college, according to a recent report from the Public Policy Institute of California that examined the early impact of community colleges expanding access to English and math classes for transfer.

The community college system offers two pathways to take transfer-level math: One is Statistics and Liberal Arts math. The other is Business, Science, Technology, Engineering and Math, or B-STEM. Students decide which math pathway fits their major and career choice.

Cuyamaca saw a shift in progress as it opened access and direct enrollment into math courses for transfer. From 2015 to 2016, enrollment in these classes more than doubled. By fall 2018, more than 75 percent of first-time math students were starting in a transfer-level course at the college. And more of them were passing the course. In 2018, 380 students completed the college-level math class compared to just 163 completions in fall 2015, according to PPIC.

As a freshman and 2017 high school graduate, Mariam Shamon dreaded taking math classes, but that was before she enrolled in Cuyamaca’s statistics class for transfer. She said the revamped math class helped her with the algebra concepts she didn’t understand in high school.

“I recognize now looking back to high school that I didn’t understand the fundamentals,” said Shamon, 20, of San Diego and now a third-year Cuyamaca student. “When we would move on to more advanced concepts, I would have a hard time because I was struggling with the basics.”

Shamon graduated high school with a D in pre-calculus, so in 2017 she enrolled in Cuyamaca to study political science. Because she had performed so poorly in math in high school, Shamon decided to pursue a liberal arts major. But the college’s new math classes in statistics changed her outlook.

“With this math course, we would go over basic concepts and the advanced concepts and I wouldn’t have to trail back,” she said.

Cuyamaca and Siskiyous changed their math courses by adding corequisite supports, eliminating placement exams and allowing students to use their self-reported high school grade-point averages to decide which math to take. Corequisite is a popular type of remediation attached to the classes that can transfer to universities and may give students who need additional help more one-on-one teaching, more lab time or tutoring.

Marshall said Cuyamaca made multiple changes at once, so it is difficult to pinpoint why the achievement gap closed for Latino students. But she also credits the college for focusing on “student-centered” classes. For example, Cuyamaca instructors can attend a teaching program at the college that helps educators create an equity-focused classroom for students and helps them to recognize their own cultural biases. The program helps faculty figure out ways for the college to change to help students, instead of demanding students change to fit the college, Marshall said.

Siskiyous officials attached corequisite courses to all transfer-level math classes at the college, so students had additional support whether they needed it or not. Although students may need to retake one math class, they haven’t had to re-take it more than two times, said Valerie Roberts, associate dean of student services at Siskiyous

The PPIC report — and two other reports examining AB 705 implementation — have all shown that eliminating traditional remedial courses and increasing access to classes that can be transferred to universities has helped more students complete college-level math, said Eloy Oakley, chancellor of the California Community Colleges.

“To those colleges and the small group of faculty that have expressed concerns, I would say this body of evidence is a good indicator that their fears are not going to be realized,” Oakley said. “There is a lot of math and English faculty throughout the state implementing with fidelity, and things are going well.”

“Colleges have been more engaged to do these curricular changes in English than in math,” said Marisol Cuellar, a senior research associate at PPIC. Redesigning math is arguably more complicated for colleges because of the different math pathways. Liberal arts majors, for example, would enroll in statistics and pre-calculus would be a course for students pursuing business or in fields that emphasize math and science. The colleges would need to tailor the additional support for each course to fit each pathway, she said.

The existence of intermediate algebra may also complicate the issue because many students may choose to enroll in that course instead of a transfer-level math course, Cuellar said. Intermediate algebra courses satisfy the associate degree requirement but are not transferable to a four-year institution.

Roberts acknowledges that Siskiyous, which is the state’s northern most community college, is pretty small compared to other colleges in the system, and so reforming the math courses may not have been as difficult as it could be for larger colleges. Marshall said Cuyamaca has only 9,000 students and noticed it had more flexibility than larger San Diego-area colleges in undergoing reforms.

“Our small class size, 20 to 25 students, that helps with lab time and students really do get time with the instructor,” Roberts said. “It also helps that the person leading the statistics reform has a degree in math education and teaches math.”

Roberts said those faculty members who were against the changes in the beginning left the college, which opened the door for Siskiyous to hire instructors who were eager to carry out the reforms.

Some faculty have opposed the changes, insisting that unprepared students shouldn’t be thrust into college-level math classes.

The state’s Smarter Balanced tests offer a measure of just how prepared high school graduates are for transfer-level math. Only 32.24 percent of California 11th-graders met or exceeded the standard for math on the 2018-19 Smarter Balanced exam.

Roberts said that, so far, these test results don’t appear to matter or have any impact on what happens when these students go to college. The research shows that despite low high school math performance across the state, students are finding success in completing college math courses because of these changes. Educators in the community college system have learned that a single standardized assessment is not an accurate indicator for college readiness, she said.

Shamon, the Cuyamaca student, said she used to be afraid of math. But she got an A in the college’s revamped math class and enjoyed it so much that she changed her major to civil engineering and is planning to transfer to San Diego State University in the spring.

“I had spent all of high school thinking I wasn’t a math person,” Shamon said. “But you get to college and it shifts. I have a whole new perspective on math. I look at my courses and think, ‘So what if it’s math-intensive, it’s fine.’”