As California community colleges gear up to teach less remedial math, one college shows how it can be done 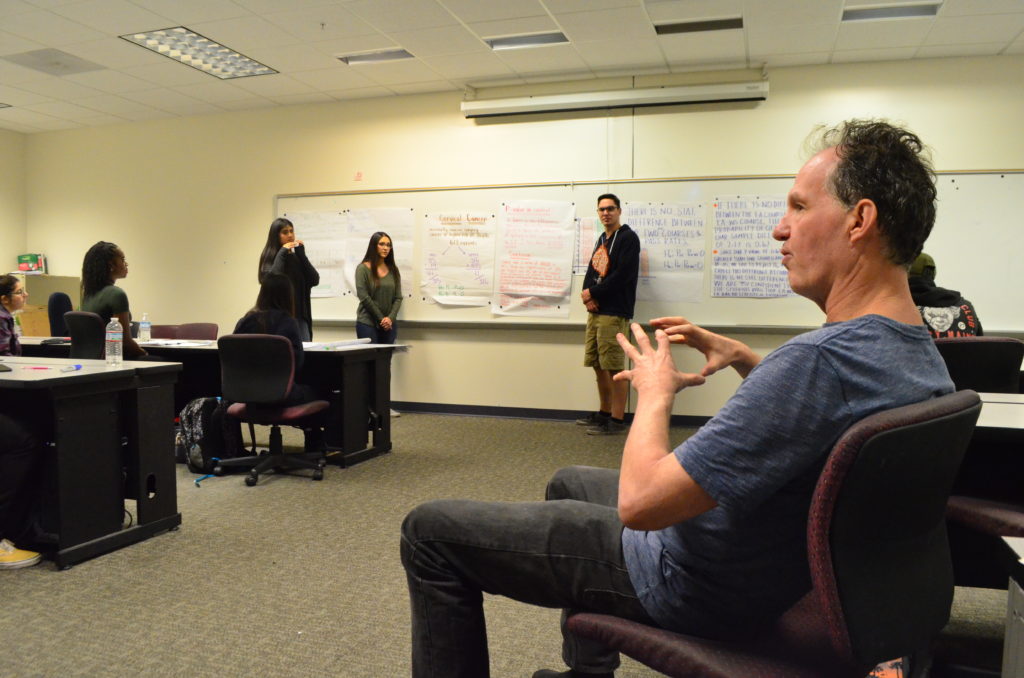 California’s 114 community colleges have until this fall to end remedial courses for most students. 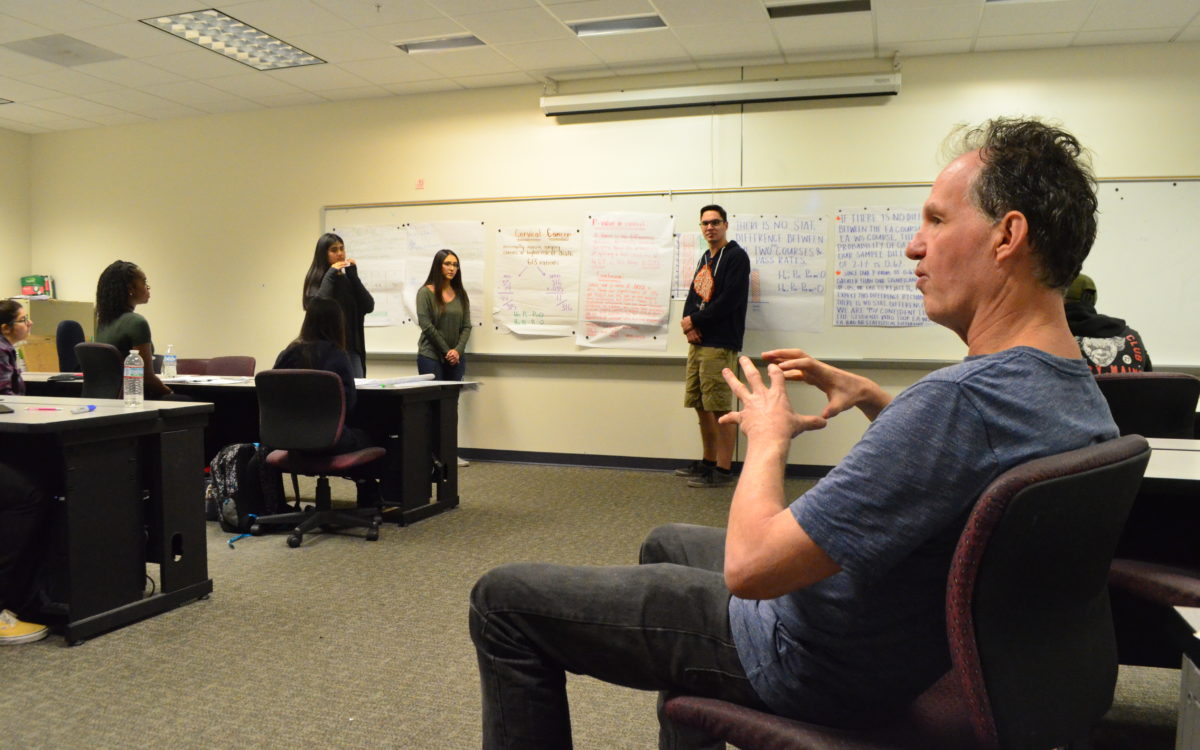 Mikhail Zinshteyn/EdSource
Instructor Joe Gerda during a lecture in his statistics course at College of the Canyons, a community college in Santa Clarita.

Mikhail Zinshteyn/EdSource
Instructor Joe Gerda during a lecture in his statistics course at College of the Canyons, a community college in Santa Clarita.

Allessandra Reyes by her own admission “was really bad at math” in high school. The now 18-year-old freshman at College of the Canyons, a community college in Santa Clarita, failed Algebra II in 10th grade, eventually passing it after several attempts.

But in college she had an opportunity to take a statistics course in the fall, earning a B on her first try. In doing so, she cleared a major hurdle many community college students struggle to overcome: completing the all-important math class that can be transferred to a four-year university.

Her success reflects what community college officials hope many students will experience this year when the state’s 114 community colleges must conform with a new state law known as AB 705, which requires that students be given alternatives to remedial courses. The law was approved unanimously in 2017 by state lawmakers and signed by Gov. Jerry Brown to ensure more students pass the courses they need to earn degrees and transfer to four-year universities.

College of the Canyons, in Los Angeles County, has been a trailblazer for several years with its policy of placing more of its students in math classes that can transfer to universities instead of remedial courses, bringing it closer to compliance with the radical transformation that AB 705 calls for.

Because of Reyes’s score on the college’s math placement test, she was given a choice: to either take a remedial algebra course that covered much of the same material she struggled to learn in high school or to take a statistics course that would give her the credits she needs to transfer into a four-year university.

Initially she was scared of the innovative one-semester course, which combines remedial math with statistics.

By fall 2019, a majority of students at California’s community colleges will be able to take math and English courses with credits that can transfer to four-year colleges without having to take remedial classes in those subjects first. It’s a transformation for a system in which most students were forced to take remedial classes that cost time and money, but wouldn’t count for transfer credit.

To help students bridge any gaps in their skills, many of these math classes will include a class offering extras, such as more learning time and tutoring alongside the traditional transfer-level class, called co-requisite support.

To make good on the law’s goals, the placement tests that kept most students in remedial courses are being phased out, too. Some of the remedial policies placed students so far behind that they would need to pass four remedial classes before being allowed to take a course required for transfer.

“Our reliance on assessment and placement tests has historically under-placed students,” said Laura Hope, executive vice chancellor at California Community Colleges, at an October conference. “We’ve students who had calculus in high school and end up in arithmetic” courses in college.

Guiding the system’s ambitions is a major research project on students who were told they needed remedial support. The findings show more success among students whose placement test scores would have sent them to a remedial course but who were allowed to take a class required for transfer instead. Those students passed the transfer courses at much higher rates within a year than students who pursued the traditional remedial route first.

The results apply to transferable courses in English, statistics and math for science, technology, math and engineering majors, such as pre-calculus. Even students with low high school GPAs had greater success when placed directly in transfer-level math and English.

College of the Canyons began in 2016 to give a choice to a majority of students who took the placement test and were placed in remedial algebra: take the remedial class or a transfer-level statistics course instead. Results from the 2017-18 school year show a major difference in student outcomes.

The secret to the course’s success, students say, is the subject itself.

“It’s more the visual part of it. The histograms, I’m used to visually seeing certain things and connecting it all,” said Rebecca Cavitt, 32, who earned an A in the class and expects to receive an associate degree in communications this spring.

Joe Gerda, Cavitt’s instructor at College of the Canyons and a former college administrator, has been a major advocate for the reforms brought forth under AB 705.

He points out, however, that some colleges could face problems if they lack statistics instructors.

His advice to other colleges preparing for the law’s changes is to “be ready to offer a lot more statistics,” in large part because most students don’t need algebra and pre-calculus for their degree goals. He said College of the Canyons tripled the number of statistics courses it has offered in recent years and it plans to offer more.

Before taking Gerda’s class, Cavitt took intermediate algebra several times, having struggled with it in high school and a community college in Houston.

“With statistics and the teacher that Mr. Gerda is, it’s amazing,” she said. “The way that he teaches, it’s not directly from a book … and then a lot of numbering on boards and you’re just so lost you can’t ask any questions.”

Gerda’s class is heavy on group work, too, an approach that students say makes them care more about the class and creates a feeling of community where students help each other.

“It helps you learn and gets you motivated because everyone in the class wants to pass with each other. It’s not just everyone looking out for himself,” said Gabriel Wilcox, who twice couldn’t pass an intermediate algebra class in college but earned a B this semester in Gerda’s statistics class.

For students who may need extra help, the college is developing for next year so-called corequisite classes, which they take along with a transferable math class. Students will be offered these support courses based on their high school grades, the highest level math class they took and the grade they got in it.

What College of the Canyons and others in the system aren’t doing is removing all of their remedial classes. That has some advocates of AB 705 worried because the law allows students to take remedial courses if they want to.

Offering remedial classes “ignores all of the research” showing students do better in math courses that would transfer to universities, said Katie Hern, an English instructor at Chabot College and co-founder of the California Acceleration Project, an organization that seeks to improve student outcomes in transfer-level courses.

By giving students the choice to take a remedial class, colleges risk creating more opportunities for students to miss out on taking courses that count for transfer. “Every time you add levels you reduce the capacity of students to complete,” Hope said.

Nonetheless, students should have the choice to take remedial classes, said John Stanskas, president of the Academic Senate for the community college system.