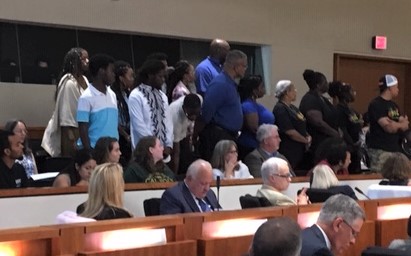 Proposal says courses like statistics or personal finance will be accepted.

The 23-campus California State University system on Tuesday launched what promises to be four months of contentious and soul-searching debate on whether to require a fourth year of high school math or a quantitative reasoning course for freshman admissions starting in 2026.

CSU trustees heard details of the administration proposal and intense opposition from some 30 speakers from community organizations, civil rights groups and educational access programs. Those critics warned that the new requirement would especially hurt low-income, black and Latino students who are more likely to attend high schools that don’t offer the necessary courses.

The criticism provided a preview of what trustees may expect in August when they will hold a full hearing on the matter. A decision by CSU trustees is expected in November.

Starting with those seeking to enroll in 2026, the proposal calls for CSU applicants to complete a fourth year of high school math or a quantitative reasoning course, such as statistics, computer science or an extra lab science, among others.

Officials said the additional requirement, up from the current three years of math culminating with at least Algebra II, would better prepare students for college studies and for all sorts of careers. They noted that 78 percent of freshman applicants already meet the proposal and that about 95 percent of California high schools offer courses that could fulfill that fourth-year slot.

And administrators kept emphasizing that the measure does not mandate calculus, which many students fear. It could be met with a class in personal finance or computer-assisted drafting.

Now both CSU and the ten-campus University of California system require three years of math and recommend four as part of the so-called A-G courses that make a student with the right grades eligible for admission, although not necessarily at very competitive campuses. Some critics say the CSU change could confuse students since it will not align with UC.

Speakers on Tuesday said the proposal would create unfair barriers to students, particularly those in high schools that don’t have the funds to staff extra courses. Some CSU trustees also raised many questions and said the university could not dictate policies and course offerings to high schools.

In a response to such concerns, proponents have modified the plan to allow waivers from the requirement for students who attend high schools that don’t offer the extra courses. Details of how that would work were not disclosed Tuesday.

Recognizing the controversy, CSU officials set out an unusually lengthy schedule to consider and possibly change the proposed rule. The first step is a public hearing on August 29 at the system’s headquarters in Long Beach. Then a formal, detailed plan will be presented to trustees in September for more debate and a vote would be held in November.

Trustee Hugo Morales said on Tuesday he was worried that the proposal could “close an opportunity potentially to many of the folks who need an opportunity to attend college” and suggested that the idea be changed from a requirement to an admissions recommendation. He said he was particularly concerned about the impact on students from small and rural districts “that frankly are struggling in terms of finances” and have trouble recruiting and retaining enough teachers.

Similarly, trustees’ board vice chair Lillian Kimbell said she understood that students with four years of quantitative reasoning in high school do better in college but she is concerned that “we don’t have control over what high schools are required to offer and how well they are doing it.”

Several public school districts, including Los Angeles and Santa Ana, recently announced opposition to the proposal. Such influential organizations as the Mexican American Legal Defense and Educational Fund (MALDEF) and the Campaign for College Opportunity, a policy and advocacy organization in Los Angeles, also criticized the plan over the past few months.

Proponents insist the plan won’t restrict admissions access. The overall proposal is being developed “to do no harm,” said Marquita Grenot-Scheyer, CSU’s assistant vice chancellor of educator preparation and public school programs. She and other administrators said that the seven years allowed before implementation are intended to give schools and families enough time to adapt.

They emphasized that the plan is not intended to change the composition of the student body or to reduce the numbers of low-income or Latino and black students. In fact, they said it would help more of them enter STEM fields. Its authors even have labeled the plan as “Expanding Opportunity through Preparation in Quantitative Reasoning.”

Still, critics were very vocal during the public comment portion of Tuesday’s meeting and some protesters silently stood up to emphasize their opposition.

Among the speakers was Jennifer Cano, director of education programs and policy at the United Way of Greater Los Angeles. She said the extra requirement could undermine community efforts to increase college enrollment of low-income students and those who are in the first generation of their families to attend college.

“It would serve as a barrier for college access,” she said.

Aaron Castaneda, president of the Cal State Los Angeles student government, said many current students on campus would have had trouble gaining entrance if the proposed rule had been in effect already. He said most students are opposed to the idea and think it will unfairly make it harder to be admitted to the university.

The proposal has been circulating in CSU since a faculty task force in 2016 first recommended adding the additional high school requirement to be admitted to the university system.

CSU trustee Christopher J. Steinhauser, who is also superintendent of Long Beach Unified School District, said he supports the plan. His district already requires four years of math, which can include computer science or statistics courses, for high school graduation. That’s a higher standard than most other California districts. Despite his initial misgivings, that change has increased CSU and UC eligibility among Long Beach students, according to Steinhauser.