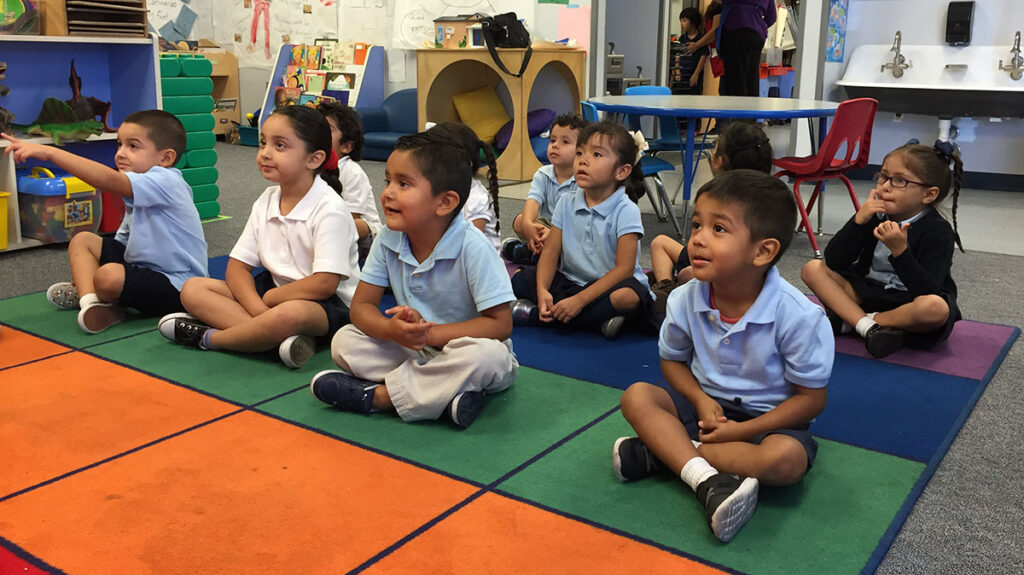 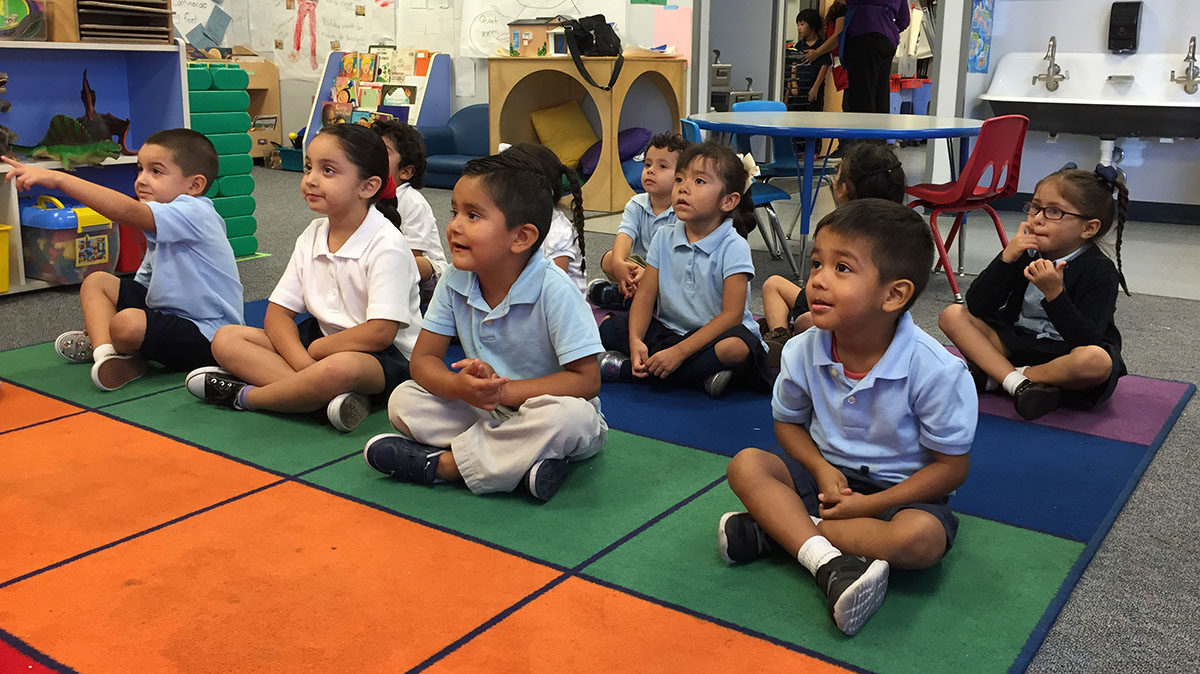 When Joyce Ponce used to teach Head Start preschool programs in Santa Clara County, she taught in English, though many of the children in her classroom spoke Spanish or Punjabi at home.

“I noticed the kids who did not understand English were just sitting off to the side, but the moment the assistant would come and speak their language, they blossomed, their eyes opened up,” Ponce said.

Ponce, now a coach for other Head Start teachers, is one of hundreds of preschool teachers and supervisors across California who are getting training this year on how to support children whose families speak a language other than English at home. These students account for 60 percent of children under 5 years old in the state and are often referred to as “dual-language learners” because they are learning two languages as they grow — their home language and English.

For the first time, this fiscal year the California Department of Education awarded $5 million through the Dual Language Learners Professional Development Grant to six organizations to train preschool teachers who work with dual-language learners. Most training for teaching bilingual children in the past has been focused on elementary, middle and high school teachers.

The six grantees range from a project that trains child care providers who serve infants and toddlers to online courses for college students preparing to become preschool teachers.

“These are very exciting times,” said Patricia Lozano, executive director of Early Edge California, a nonprofit organization that advocates for young children and is helping the California Department of Education implement the grant. “We’ve come so far in recognizing the benefits of speaking more than one language. All kids benefit from learning two languages. Hopefully California will be a leader in implementing this everywhere.”

Research shows that no matter what language they speak, it’s crucial for small children to be exposed to lots of rich, complex vocabulary to help their brains grow. It helps them learn to speak and gives them a strong foundation to later learn to read and write.

For children who speak a language other than English at home, research shows that early development of both their home language and English can help them succeed later in life. According to a report called “State Policies to Advance English Learners’ Experiences and Outcomes in California’s Schools,” one of 36 reports in Getting Down to Facts II, a comprehensive analysis of California’s education system released last September, early childhood programs for young dual language learners should focus on early reading skills, maintaining a child’s home language and developing English-language skills.

“Number one, kids need a language-rich environment and experience,” said Laurie Olsen, founder and strategic adviser of the Sobrato Early Academic Language (SEAL) model, one of the groups that received the grant to train early childhood educators across the state. “Our goal is to create literate children that are lovers of language and able to really use language for many, many purposes.”

Olsen said even when teachers can’t speak their students’ languages, their attitude toward families’ home languages is crucial to young children.

“Kids at this young age are developing identity and attitudes around language,” Olsen said. “This is where language shame and language rejection really starts, among 3- and 4-year olds. Teacher attitudes and the way they can talk to kids and affirm, ‘How wonderful that you have this language ability, keep it going, I wish I could do it,’ — that messaging is really important.”

In SEAL’s first training session, about 30 preschool teachers and supervisors who work in Santa Clara County Office of Education preschool programs were immersed in ideas for how to infuse language development — in English or the child’s home language — into every classroom activity.

Olsen passed out trays piled with different kinds of balls — marbles, bouncing rubber balls, tennis balls, soccer balls, foam balls and basketballs. She asked the preschool teachers to brainstorm words that they might use to describe the balls — words like soft, firm, fuzzy, lumpy, smooth. Then she asked for words to describe the ball’s motion — roll, spin, fly, bounce. Soon, the teachers were coming up with words to discuss games, like referee, uniforms and rules, and then discussing how students can learn to construct sentences comparing and contrasting balls.

“There are many preschool teachers that believe that their job around early literacy is sitting on the carpet and saying ‘ba, ba, ba, ball,’” said Olsen. “It’s an approach to literacy that is very decontextualized from what kids need language for.”

Contrast that approach — repeating the sounds of letters — with SEAL’s approach, which is to create an environment where kids can explore the world as scientists, touching, investigating, playing and using language all the while.

“If we’re studying insects, you’re going to see the magnifying glasses and insects of all different sizes and kids dressed up as entomologists,” Olsen said. “Kids are scientists, they’re inquirers, they want to understand the world and name the world and talk about the world.”

SEAL has worked with preK to 3rd-grade teachers in school districts for 11 years. Olsen said she has seen real changes in district classrooms where teachers have taken the training. “Kids talk more,” she said. “They’re producing a lot more language and a lot more complex academic language.”

In addition, she said children in classrooms with SEAL-trained teachers often have fewer behavior problems, because they are more engaged and excited about what they’re learning.

SEAL encourages teachers to bring home languages into their classrooms in whatever way they can. Many of the teachers present at the first training session in Santa Clara speak Spanish or Vietnamese, but in their classrooms, they had been teaching mostly in English.

SEAL’s senior early childhood education trainer, Patricia Montes Pate, described how preschool teachers can read several books to their class with the same story line, but from different cultures — The Gingerbread Man, The Runaway Tortilla and The Runaway Rice Cake. Then, children are encouraged to talk about how the stories are similar and how they are different.

“You can even start your own story, the Runaway Burrito, or the Runaway Sushi Roll,” said Montes Pate. “Every time we read a book, we don’t want children just passively listening to it. We want them engaged, acting it out, responding.”

During the training, Montes Pate encouraged teachers to consider other ways to make home languages visible in the classroom, even when teachers don’t speak them. Aides and parent volunteers can help provide home language support, she said, or teachers can bring in recorded books and songs in children’s home languages.

That helps children recognize that their language can have a place in school.

For Montes Pate, it’s personal. When she was a child growing up in San Jose, she spoke Spanish at home with her parents, who were immigrants from Mexico. It brings tears to her eyes to remember what it was like to go to elementary school, where she did not see any books in Spanish or hear anyone speak her family’s language.

“Being a dual-language learner myself, being raised in an era where there was shame for having parents who didn’t speak English, being able to give this opportunity to children where they can learn English but be able to feel value and acceptance and pride in who they are and who their family is” is a gift, she said. “That’s one of the messages SEAL brings to teachers. English, English, English is the priority and it shouldn’t be.”

The research presented by Olsen around home language also rang true for many of the teachers taking the training.

“Children do get left behind,” said Ponce, the Head Start teacher coach. “We see that across the field. Once they get to elementary, they struggle with the language barriers. They don’t have the vocabulary to express themselves.”

Lyndale Head Start teacher An Ho, who has been teaching preschool-age children for 25 years, said she appreciates the step-by-step instruction for how to use language with the kids. “I feel ease now,” said Ho, “not anxiety.”

SEAL is currently training preschool teachers and aides in Santa Clara and Tulare counties and in the Azusa Unified School District, with plans to expand to another three locations this summer. The trainers will continue to meet with teachers for 18 months, to develop curriculum around different topics.

“This set of grants from the Department of Education is a bare scratch on the surface of the need,” said Olsen. “We are working with six counties, but there are many others that really want to be involved, really want this opportunity. And that’s true for the other grantees.”

Several advocacy organizations are working to try to secure long-term investments from the state to keep training early childhood educators and to expand dual-immersion programs at the preschool level.