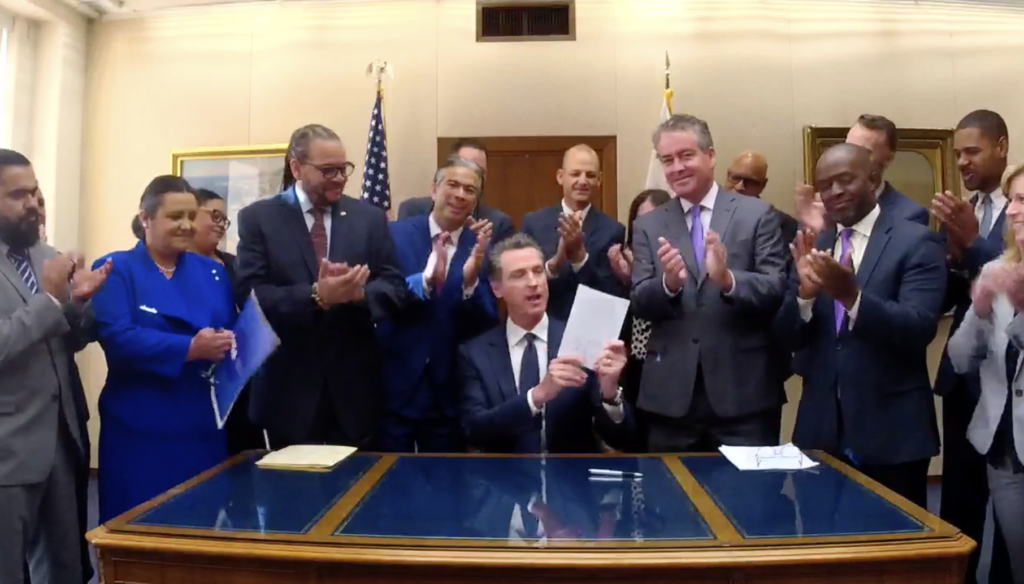 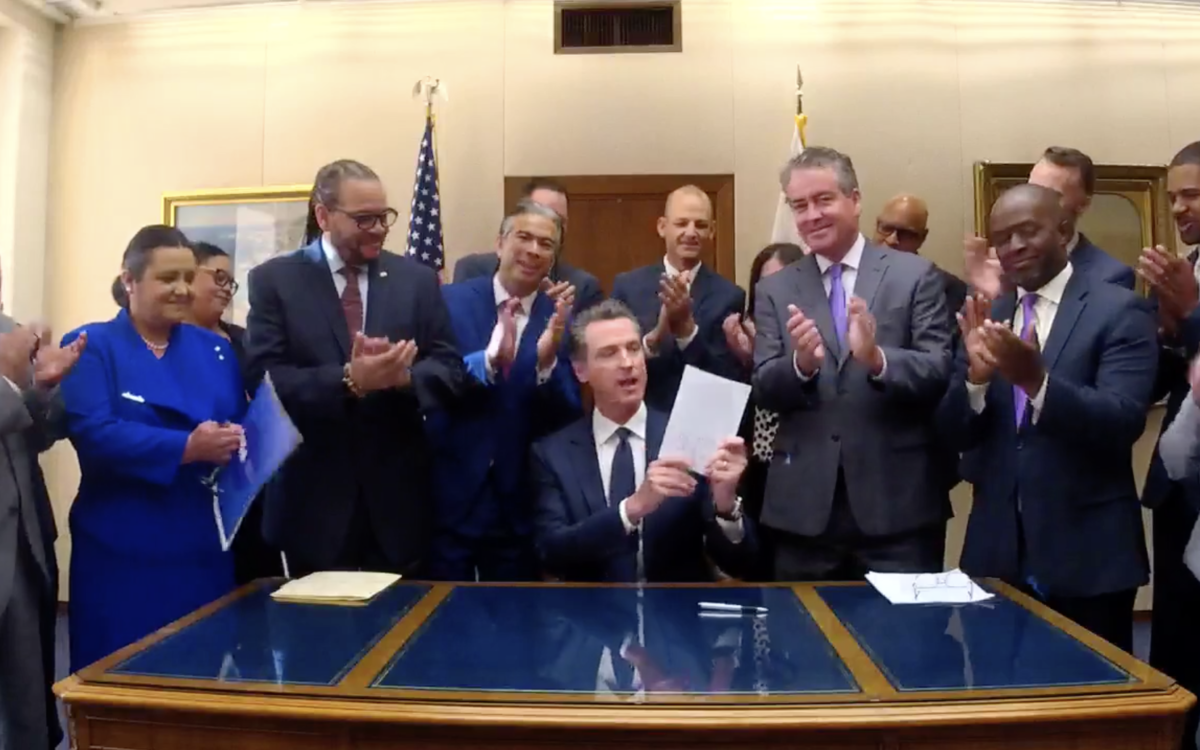 Gov. Gavin Newsom signed Thursday a comprehensive rewrite of the charter school law that will expand the authority of local school boards to reject new charter schools while requiring that they more clearly justify their reasons for doing so.

Newsom’s staff negotiated the revisions during weeks of tense discussions with organizations that for years have been battling over the growth of charter schools in California. But at the signing ceremony for Assembly Bill 1505, the leaders of the two main antagonists, the California Teachers Association and the California Charter Schools Association, stood side by side next to him, smiled appreciatively and thanked the governor for a compromise that contains elements they like.

For more on EdSource’s extensive coverage of the bill:

“The fact that you are standing together makes me proud as a Californian,” Newsom told CTA President E. Toby Boyd and charter schools association President and CEO Myrna Castrejón. He said that he hoped that the trust built during the negotiations would lead to further collaboration.

Calling the law a significant achievement, Newsom said, “This is what policy-making is about — the nitty-gritty work of moving the needle and making a difference for millions of kids.” They had been affected, he said, by disputes over charter schools “that continued to fester and became front and center in our education debate.”

“We’ve made significant progress on behalf of our students. Today’s a good day.” Boyd said. “We made monumental changes to improve outdated and broken charter schools laws. Students and taxpayers have paid the price.”

Newsom said he also appreciated the efforts of Assemblyman Patrick O’Donnell, D-Long Beach, who sponsored AB 1505, and State Superintendent of Public Schools Tony Thurmond, who convened a task force on charter school reforms that Newsom asked him to convene. Some of the task force’s recommendations were in the revised bill.

Brokering a deal proved to be one of Newsom’s biggest challenges in his first year. He had called for more transparency in charter school operations during his gubernatorial campaign and, in one of his first actions as governor, shepherded legislation to require charter schools to follow the state’s open meetings, public records and conflict of interest laws.

But, while re-examining the law, he didn’t support giving local districts carte blanche to deny new charter schools, as called for in the early versions of O’Donnell’s bill. Castrejón had called the bill an “existential threat” to the state’s charter schools.

With more than 1,300 charter schools serving 11 percent of the state’s 6 million public school students, charter schools have expanded rapidly during the past two decades. But faced with rising costs and loss of students to charter schools, urban districts where charter schools are concentrated blamed them for their financial troubles and demanded a moratorium on new charters.

The new law will revamp important sections of the charter school law covering approvals, renewals and appeals of denials. The biggest change will permit charter authorizers — school boards and county offices of education — to consider for the first time the potential financial impact of charter schools as a factor in turning down a proposal. That’s a huge win for districts and the CTA.

Those districts certified as financially troubled or facing a possible state takeover will be able to deny a new charter school automatically. Others will have to document that the charter school will “substantially undermine” existing services and programs or that it will duplicate a program already offered in a “reasonably” nearby school with the capacity to serve more students.

Other changes pushed by the CTA and the California School Boards Association include all but eliminating a second level of appeal to the State Board of Education, clearer grounds for closing down poorly performing charter schools and, at O’Donnell’s insistence, a requirement that all teachers in charter schools obtain a teaching credential. Only those teaching core academic subjects, such as math, science and English language arts, have had to be credentialed.

The charter schools association had the most at stake with the retirement of former Gov. Jerry Brown, the founder of two charter schools in Oakland, who opposed any changes to the charter school law. It had gambled and lost big when it criticized Newsom as anti-charter during the Democratic gubernatorial campaign last year and spent $23 million on the failed campaign of former Los Angeles Mayor Antonio Villaraigosa.

While the organization didn’t end up supporting the bill, it was satisfied that the new law preserves several protections:

Some charter school advocates are predicting that the law will be catastrophic. Districts that have ignored the law’s requirements in the past will seize on the ambiguities in the language as an invitation for a denial and some county boards will rubber stamp those decisions, they say.

How California’s 1,000 school districts interpret the language and courts eventually rule will determine if they’re right.

“No one is naïve. There are many parts of this legislation we believe will work in the best interests of our kids but it may turn out in the application will require some adjustments,” Newsom said. “But that’s the spirit I am speaking to at this moment. I want to maintain the level of cooperation and collaboration.”