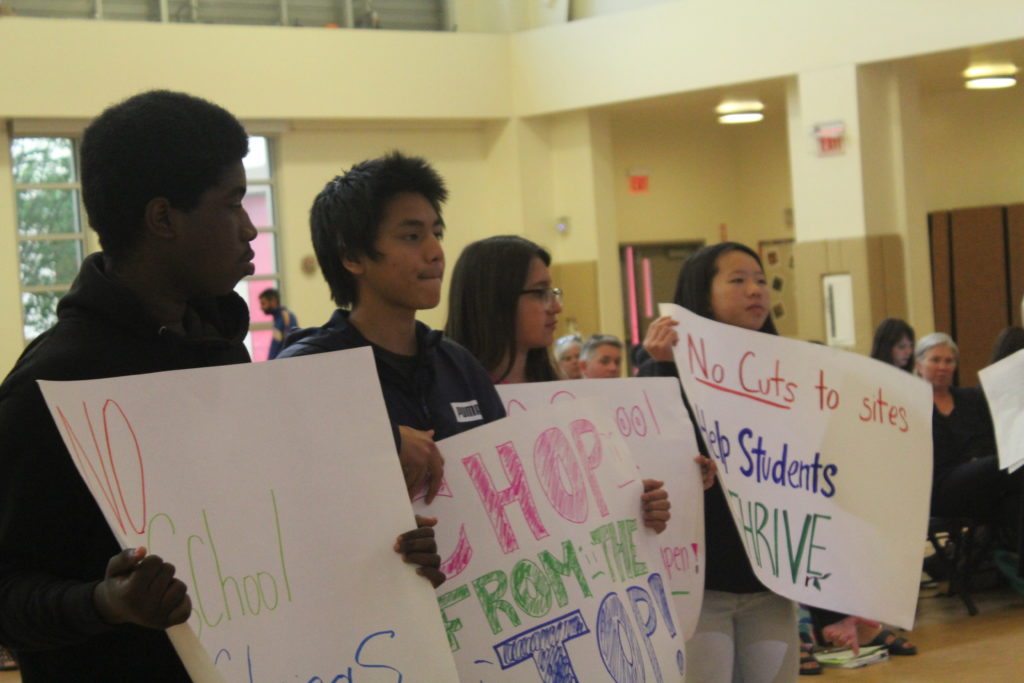 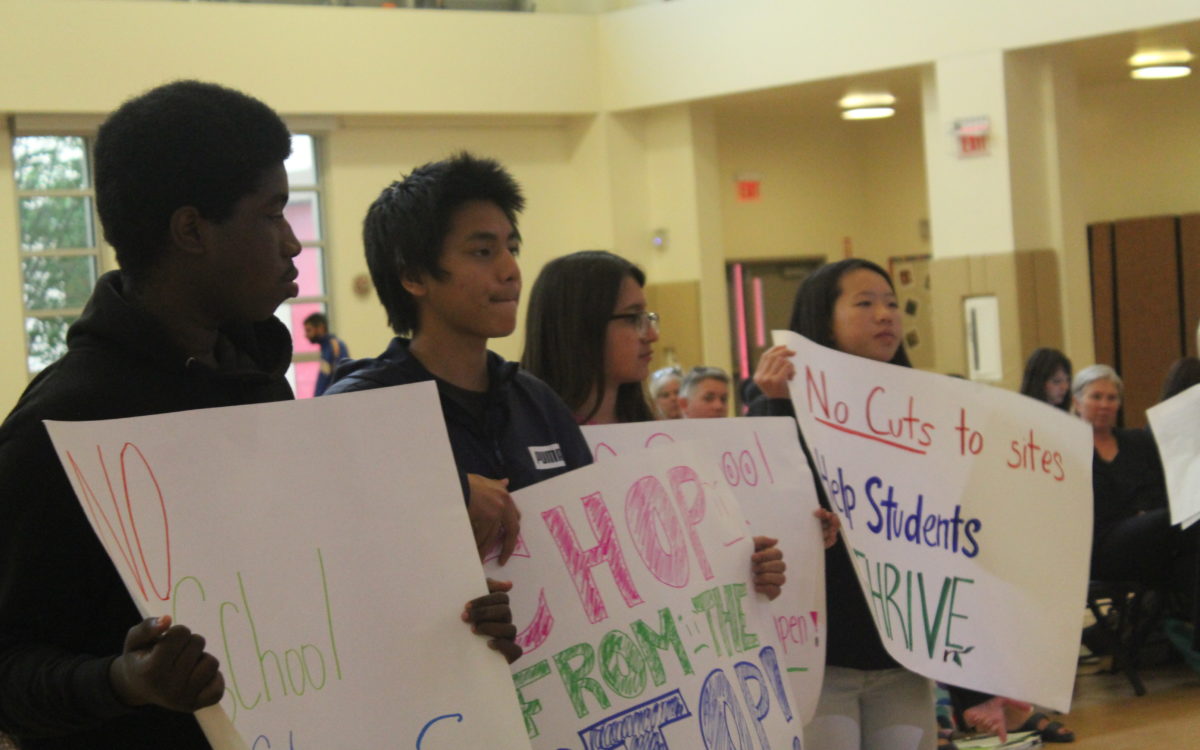 Months after Oakland’s first teachers strike in nearly a quarter century, the district is still trying to make its way through the most difficult challenge any district faces: deciding what schools to close, while at the same time fending off community opposition.

District leaders say it is not just a question of closing some schools. Instead, they are devising a plan to merge some campuses, expand others and completely “redesign” others, with the goal of strengthening the remaining schools and attracting students back to the district.

Superintendent Kyla Johnson-Trammell, after almost exactly two years on the job, says the district can’t afford to provide all of the resources needed for success in the more than 80 schools it currently operates.

“It’s not just closing schools,” Johnson-Trammell said in a recent interview in her office in downtown Oakland. She explained that the goal is to improve the quality of schools by using money saved through closing or merging schools to add librarians and mental health services, along with other resources, to the campuses that remain.

“So, part of our dilemma is really looking at what we want to have in all of our schools — which is beyond just having the teachers, the principals and the administrative staff — but really making sure that in all our schools we have the sufficient staff necessary for our programs and sufficient staff necessary for our student services,” she said.

The schools run directly by the district serve just under 37,000 students. That’s down from about 50,000 students two decades ago.

Much of the decline is due to the high enrollment of students in charter schools, now totaling about 13,700. Some of it is related to declining birthrates and families not being able to afford to live in Oakland due to escalating housing costs. And as in many districts, some parents also choose to homeschool their children or send them to private schools or schools outside the district.

Against the backdrop of another critical civil grand jury report, the district continues to struggle financially. It has made about $20.2 million in cuts to  its 2019-20 budget to help pay for teachers’ raises agreed to as a result of the strike, and to rein in costs generally. But the final budget to be approved by the board this week shows that the district will need to cut millions more in  the 2020-21 and 2021-22 school years to make ends meet.

The district closed its first school this month. In the fall, it will open its first campus that is a merger of two schools, along with its first two expanded schools to accommodate more students. Another merger will be fully implemented in fall 2020.

The school board expects to vote Wednesday on a revised list of criteria for selecting schools, then to review proposed closures, mergers and expansions in August, before voting on them in September. This will allow at least a year of planning before the changes take place.

Some members of the community and the teachers’ union spoke out against school closures at last week’s board meeting, urging the district to invest in schools instead of closing them, especially those that serve low-income, African-American, Latino and English learner students.

Megan Bumpus, a teachers’ union representative, asked the board to hold off any decisions for at least a year to give the community more time to discuss alternatives to closures, which the union opposes.

“What both teachers and community members desire is authentic support of struggling schools, not abandonment and disinvestment that creates conditions that might justify school closure,” Bumpus said.

Bumpus took issue with recommendations from a community advisory committee formed in March by the district to improve the way the district decides what schools to close, merge or expand.

The board expects to vote on those recommendations Wednesday. The committee was formed in part due to public outcry over the board’s January decision to close Roots International Academy in June and to expand Coliseum College Preparatory Academy in the fall. Bumpus said all the committee members except for teachers’ union representatives were selected by the district.

She said district staff members who met with the committee were unable to present any research showing that closing some schools and expanding others would save money or improve the achievement of African-American, Latino, English learners or low-income students. Bumpus urged the board to adopt a research-based approach for improving schools.

Yvette Renteria, deputy chief of innovation for the district, outlined proposed changes to how the district selects schools for closure, mergers or expansions. These included placing a greater emphasis on the academic performance of low-income, African-American, Latino and English learner students in evaluating the quality of a school; holding community focus groups to better understand what the campus environment is like; and considering students’ safety and mental health needs in any proposed moves.

These proposals did not appear to generate significant support among those attending last week’s board meeting. More than a dozen students, parents, teachers and community members spoke out against school closures, with some holding signs such as, “No cuts to schools. Help students thrive.”

Recalling previous school closures between 2011 and 2014, some said people fled to charter schools when neighborhood schools such as Santa Fe Elementary were shut down, but they would come back to the district if it reopened their community school.

Others said school closures have consistently hit low-income and African-American students the hardest, forcing them to travel long distances to other schools that may not have provided them with better educations.

Assata Olugbala, a community activist who routinely speaks at board meetings, said that most of the schools closed by the district in the past displaced predominantly African-American students. She raised the question of whether there might be a correlation between school closures and the high rates of chronic absenteeism, suspensions, failure to meet academic standards, and low graduation rates of African-American students in the district.

“Are you contributing to this by constantly displacing African-American children by closing schools?” she asked.

Opposition to school closings is one of the issues that led Oakland Unified teachers to strike for seven days in February and March. Part of the strike agreement included passage of a board resolution calling for a “pause” on new school closures through June.

Critics of school closures in Oakland say they have contributed to lower enrollment, as students have left the district to attend charter schools or private schools, or transferred to other districts, at least in part because they or their parents had lost trust in the district after their neighborhood schools were closed.

Board member Shanthi Gonzalez has also raised concerns about whether school closures really result in savings, since she has seen families leave after their neighborhood campuses were shut down. When the board approved budget reductions earlier this year, district staff estimated that school closures would save nearly $5 million from 2019-20 through 2022-23. But since that time, the district has backed away from those estimates, acknowledging that more money is needed to fund the planning and implementation of the changes than originally anticipated. Instead, the district is now emphasizing that any money saved from school closures and consolidations will be reinvested in the schools that remain open.

To help raise revenues, the district is looking at selling or leasing its surplus property, which the board will also discuss at its meeting this week. And Johnson-Trammell has said improved schools could attract more students to the district from charter and private schools, which would bring the district more money in per-student funding based on attendance and through the state’s Local Control Funding Formula.

The latest rounds of school closures, consolidations or expansions are part of a recently adopted 10-year “Community of Schools Citywide Plan,” which found that the district could shut or merge up to 24 schools and still serve its current and future students.

At last week’s board meeting, Johnson-Trammell said the district is trying to figure out how much money it would need for one-time planning and transition costs when it closes or merges schools, such as  moving and paying staff overtime. She said the savings from closures would be used to add resources to the remaining schools so the district would not just have “surviving schools,” but instead “thriving schools.”

“It’s not around putting money in a piggy bank or reserve,” she said. “It’s around being able to take our resources — and with fewer schools — being able to resource those schools more effectively.”

These are some of the schools targeted for mergers, expansions or closure:

In the first phase, Elmhurst Community Prep middle school and the Alliance Academy of Integrated Learning middle school will merge as “Elmhurst United Middle School” this fall and MetWest High will expand to a satellite campus.

Coliseum College Preparatory Academy will expand its 6th grade into classrooms on the closed Roots campus.

For phase 2, the district has begun exploring the idea of closing Kaiser Elementary and moving its students to Sankofa Academy elementary in north Oakland.

It also floated the idea of merging two other schools that it has since rescinded.

It is also exploring an expansion of Melrose Leadership Academy in east Oakland.

District staff also wants to redesign Fruitvale Elementary instead of merging it with other schools, in part due to improved standardized test scores over the past year. And staff wants to explore options for the previously closed Santa Fe Elementary campus, while also seeking a new site for the Oakland School of Language middle school, known as “SOL.”

The board expects to vote on phase 2 options in September.