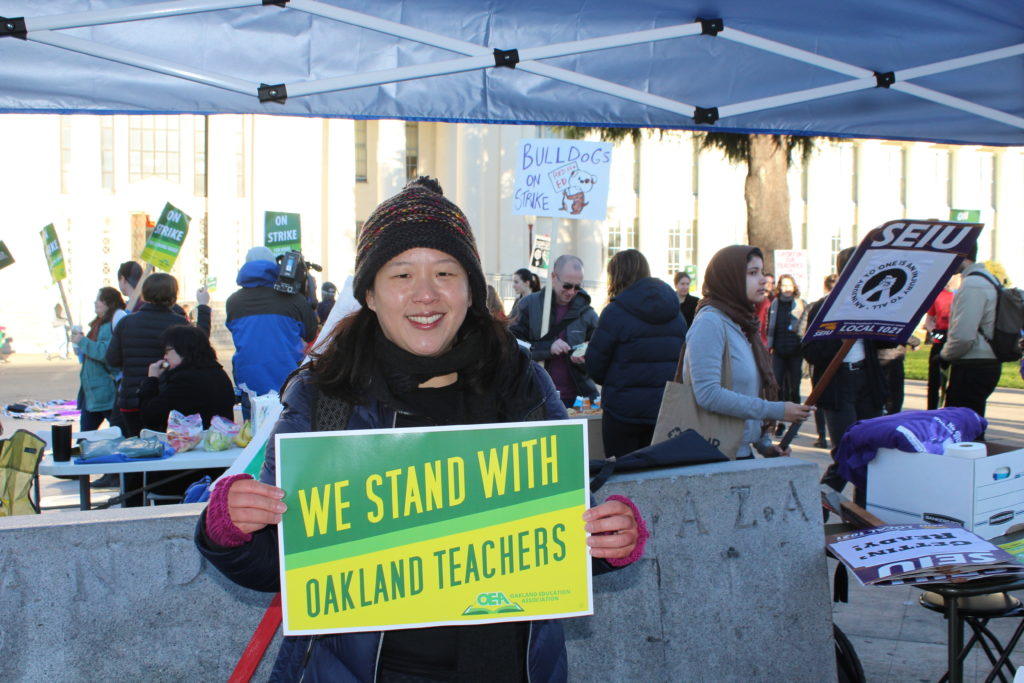 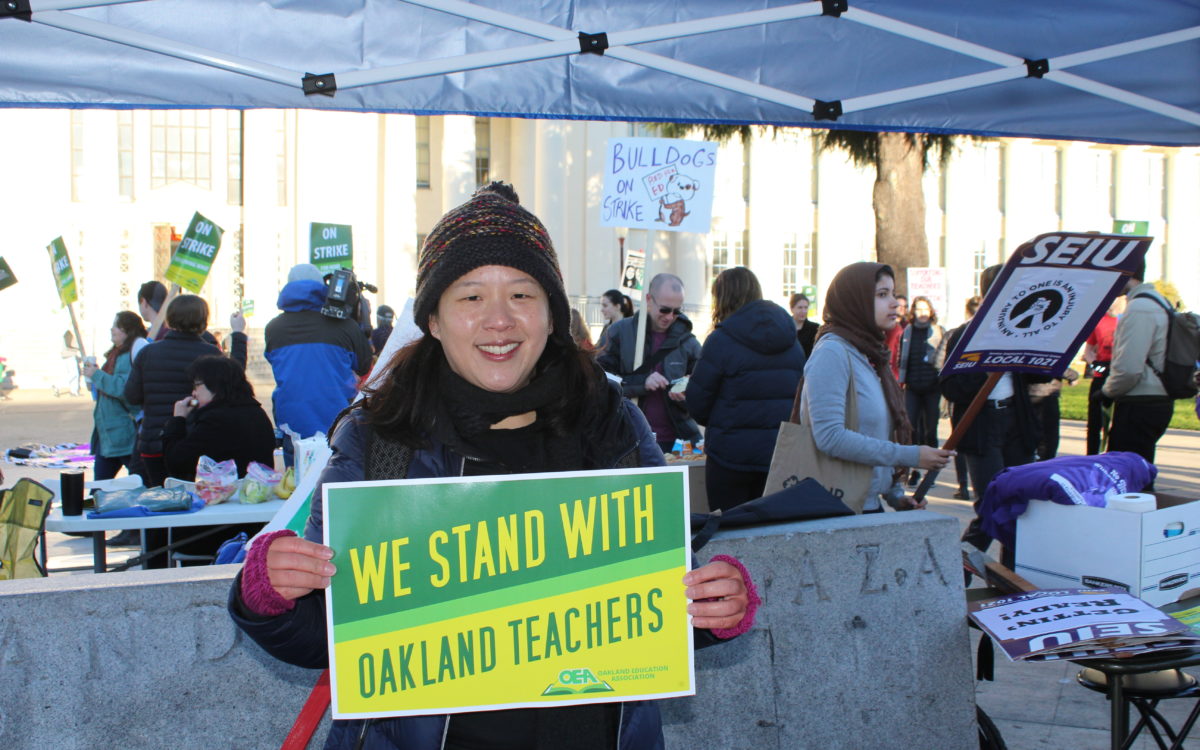 As teachers in Oakland Unified geared up for a strike, a central theme emerged in response to the district’s stance that it couldn’t afford to meet their demands — overwhelming distrust.

And as parents, students and community members including the Oakland City Council have stood solidly in support of teachers, they have also expressed skepticism over district plans to cut $20 million from its budget and close up to 24 schools over the next five years.

Teachers — after working without a contract for nearly two years — carried out their strike threat early Thursday, setting up picket lines at all 86 Oakland schools. They are demanding a 12 percent pay hike over three years along with smaller class sizes and more nurses and counselors. The district offered a retroactive 1.5 percent bonus plus an ongoing 7 percent raise over three years in a final offer hoping to avert the strike. Both sides are expected to resume negotiations on Friday.

They also rallied outside City Hall and marched to the downtown district office chanting and carrying signs such as, “On strike for smaller class sizes.” Although principals kept district schools open for the small number of students who showed up, the United Administrators of Oakland Schools expressed its support for the teachers’ concerns and urged the superintendent to “consider closing schools until the strike is resolved” due to safety concerns for students when their teachers and other support staff are gone.

All along, a lack of trust has stood in the way of a settlement, observed Najeeb Khoury, the neutral fact-finder who authored a report released on Friday urging both sides to work jointly to seek more state funding, which he said could “help rebuild trust that has been tested during this lengthy negotiating cycle.”

Khoury noted that the district “does not make an inability to pay argument,” but instead pointed to fiscal constraints and “a deep structural deficit” that would force cuts elsewhere in order to pay for teacher raises. The union, he wrote, “counters that OUSD has a budget credibility problem,” since its financial statements show budget surpluses.

The union, the Oakland Education Association, or OEA “believes that OUSD constantly overestimates expenses, which creates the appearance of a budget crisis only to lead invariably to actual surpluses,” Khoury reported.

The board is expected to vote Monday on $20.2 million in budget cuts that officials say are needed to balance next year’s budget. A portion of the cuts would in part fund raises for the teachers.

The result is intense lobbying to save programs that are on the chopping block.

The board will be acting on recommendations from Superintendent Kyla Johnson-Trammell. In a recent EdSource commentary, she said the district supports “our teachers and their larger goals: smaller class sizes, higher pay and more counselors and support staff.”

She added that the district is hoping the state will provide more education funding to all schools. In the meantime, she said, “we have to live within our current financial reality.” In a statement, the district criticized the union for sticking to the same demands made last May while the district improved its offer.

A board Special Committee on Fiscal Vitality urged the superintendent to protect programs that are working for students and eliminate those that aren’t. Three such successful programs are the highly acclaimed Restorative Justice program that teaches students leadership and conflict resolution skills, as well as a nascent Asian Pacific Islander Student Achievement Program, which saw a 20 percent jump in graduation rates for those students last year, and foster youth case managers who provide specialized support to foster youth.

Oakland Unified School District is proposing cutting the only program within the school system that is designed to support Asian and Pacific Islander youth, the APISA program has made HUGE impacts for our community, check it out here: pic.twitter.com/sDJC9IEzWV

Critics say the board can find money in three areas: cutting about $2 million a year spent to lease central office space downtown, cutting what they describe as high-paid administrators with titles such as “deputy chief” who are paid six-figure salaries and cutting multi-million-dollar contracts with consultants and vendors. They have not detailed how much the district could save by making those cuts.

When Keith Brown, union president, announced on Saturday that teachers would strike, he counted “district neglect” and school closures among the reasons.

Yet, the district wants to take money that is specifically targeted by the state to help low-income students, English learners and foster youth — and instead use it for across-the-board teacher raises. This has raised red flags among student advocates, who say this move could be illegal and would hurt the very students the money is supposed to support.

“It might help keep teachers here,” said Eric Adams, a student organizer for the Youth Together advocacy group. “But it does nothing to help train them to work with these students.” The program managers who would be able to train them, he said, are slated to have their positions eliminated.

Teacher activism in California takes on an increasingly ‘red’ hue

At a recent panel discussion with UTLA bargaining chair Arlene Inouye about lessons learned from their strike, she told Oakland educators:

“That is really the winning message — that we are fighting for our students. When we have everyone united around that, we have real power.”

Parents have joined teachers in solidarity to picket with them and keep their kids out of school. Kimi Lee, a parent whose children attend Melrose Leadership Academy and who is the director of the Bay Rising advocacy group, said parents have gone door to door to garner support for teachers and have also reached out to local businesses passing out “We stand with Oakland teachers” signs.

If the district really can’t afford to pay teachers more and meet their other demands, then she wonders where is it getting the $300 a day it intends to spend on emergency substitute teachers who are expected to step in during the strike. Many parents believe the district mismanages its funding, she said, adding that distrust has existed ever since the state took over the district in 2003 due to fiscal distress.

Even Superintendent Johnson-Trammell, who was appointed by the board around the same time the teachers’ union contract expired, admits that the district’s problem retaining teachers is “in part, rooted in our financial issues, both underfunding and mismanagement.” As a former teacher and principal in the district, she understands the problems that have plagued the district for decades.

“We owe our students the courage and candor it takes to engage in productive conflict and choose imperfect solutions over strife,” she said in the EdSource commentary.

High turnover among superintendents and top administrators has contributed to what many describe as a leadership vacuum and added to the feelings of distrust of the district by teachers and many in the community.

Although Johnson-Trammell has more clout than some other superintendents who came before her from outside the area, teachers and community members are not entirely happy with her budget solutions.

“We are striking because it’s really unacceptable the conditions we are forced to teach in and that our students are forced to learn in and there’s truly no other option,” said Harley Litzelman, a 10th grade world history teacher at Skyline High in his second year of teaching, who said the district provides very little support to teachers. “We have no copy paper, poster paper or toilet paper. We have all these different initiatives that have come and gone because we have not had the leadership and financial support for them to succeed. No one trusts them anymore.”

During Tuesday’s board meeting to discuss budget cuts, student board member Yota Omo-Sowho expressed concerns about students’ ability to trust the board to protect programs that are important to them. She proposed that the board reduce its reserve funding to preserve Restorative Justice, foster youth case managers and the Asian Pacific Islander Student Achievement program for one more year. She said students were willing to go to Sacramento to lobby for more state education funding “if you show that you care.”

“We can reach out to a lot of students,” she said. “But, we need to know that you have our backs.”

Although the district says its priority is “students first,” Omo-Sowho said the message students are receiving is: “Your stories don’t matter.”