Will 2018 be the year of the young voter in California? 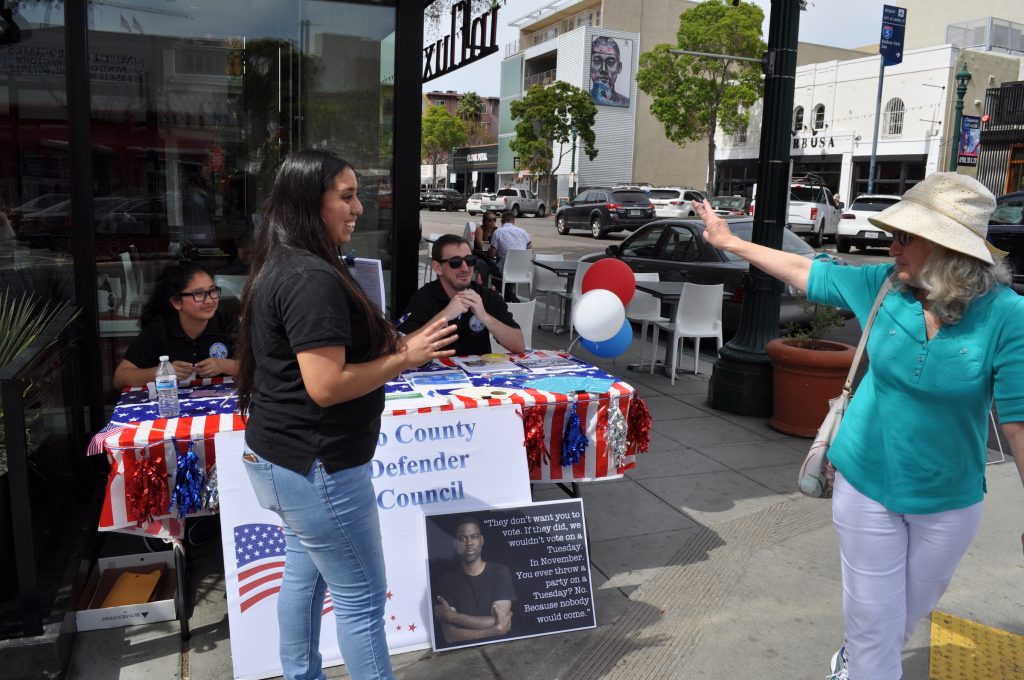 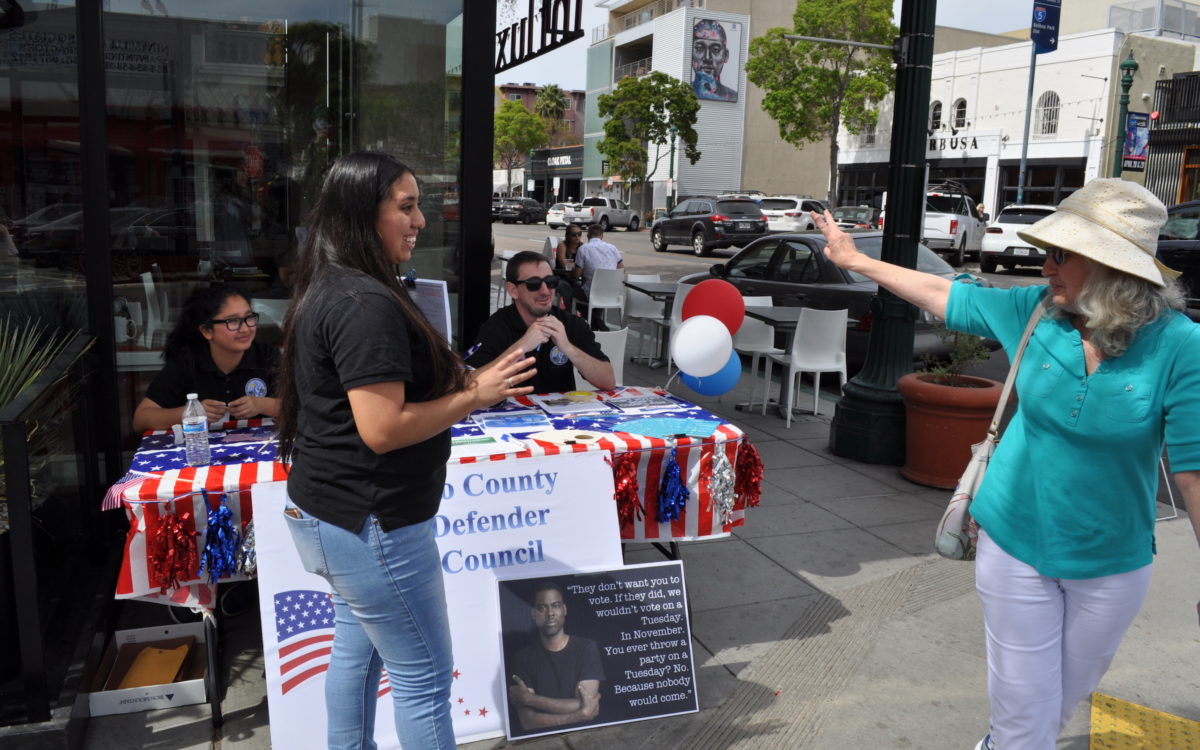 Jennifer Antunez can’t vote in this country now and might never be able to.

“I’m not a U.S. citizen, so I can’t vote,” said Antunez, who was brought to this country from the Mexican city of Cuernavaca as a 6-year-old and is registered in the U.S. government’s Deferred Action for Childhood Arrivals program, known as DACA. “But I do know that every vote does count and that voting is a privilege — I want to help people do their civic duty.”

Up the road in Los Angeles, Ben Holtzman, a senior at Alexander Hamilton High School, spent his weekend meeting via FaceTime with students from schools throughout the city with the goal of organizing pre-registration events at 30 area schools during the last two weeks of April, which since 2015 have been designated by state law as “high school voter education weeks.”

The efforts by Antunez and Holtzman exemplify a wave of legislation and youth activism around voting that advocates and officials say hasn’t been seen in California since the late 1960s and early 1970s, when student activists forced the passage of the 26th Amendment, which lowered the nationwide voting age from 21 to 18.

Since 2013, the state Legislature has passed and Gov. Jerry Brown has signed no fewer than six laws aimed at adding young people to the voter rolls or making it easier for them to cast their votes on Election Day.

Most significant is California’s new motor voter law going into effect by the end of the month that could result in hundreds of thousands of new registered voters annually, according to state officials. Under the new law, authored by Assemblywoman Lorena Gonzalez Fletcher, D-San Diego, 16- and 17-year-olds are automatically pre-registered to vote when they receive a driver’s license or state ID card, unless they choose to opt out of the registration.

This builds on a pre-registration law passed in 2014. Other laws passed in recent years require that voter education be included in high school curriculums; provide greater accessibility to polls on Election Day; and relax rules regarding registration deadlines.

And though the reforms have been in the works for years, the student-led uprisings following the February massacre of 17 people at Marjory Stoneman Douglas High School in Parkland, Fla., have boosted awareness of them far beyond the expectations of their authors.

On March 14, hundreds of thousands of students throughout the country participated in the National School Walkout to honor the victims in Parkland and demand stricter gun control laws. That event was followed by the March for Our Lives on March 24, which drew millions nationwide. On Friday, another national walkout is planned to recognize the 19th anniversary of the 1999 mass murder at Columbine High School in Littleton, Colo.

“I couldn’t think of a more appropriate time for all this to be happening,” said Assemblyman Kevin McCarty, D-Sacramento, who authored legislation that provided automatic registration through the motor voter law for 16- and 17-year-olds . “We are seeing young people all across California speaking up — engaging in issues like gun violence, health care, education funding…they want to be heard.”

The numbers are backing up McCarty’s claims. More than 100,000 California teens have pre-registered since the initial pre-registration law took effect in early 2016, according to voter registration data collected by Secretary of State Alex Padilla’s office, with the weekly totals tripling since Nikolas Cruz opened fire in Parkland.

McCarty and others credit Padilla, who has made increasing the ranks of young voters among his top priorities since he took office in 2015. He’s been a key sponsor of several of the recent bills and claims to be the first secretary of state in the nation to sponsor legislation that makes increasing voter participation one of his statutory job requirements.

“Research shows us that if we can get a young person to vote not just in the first election after turning 18, but also the second, it significantly increases the likelihood of them voting for life,” said Padilla, who’s made 45 school visits during his tenure.

Such comments are music to the ears of county voter registration officials, who have also upped their youth engagement efforts in recent years. The Sacramento County Registrar of Voters, for example, is holding mock elections at 19 high schools this year. In Orange County, the registrar runs a mock election program called “my ballot” in at least four high schools every year.

Alice Jarboe, the assistant registrar of voters for Sacramento County, said these activities are all geared toward one goal — creating healthy civic habits that will stay with young people throughout their lives.

“Voting is a learned trait,” Jarboe said. “If your family votes and the people you hang out with are more civically engaged, then you are more apt to vote.”

The proof is in the turnout

But even with all of this effort and optimism, history says young folks won’t show up on Election Day. A 2016 Portland State University analysis of 23 million voting records showed that people over 65 were seven times more likely to vote in a mayoral election than people aged 18 to 34.

So why will 2018 be any different? There are a few reasons, say those who are in the trenches.

“I think two things are happening,” said Luis Sanchez, co-executive director of the LA-based advocacy groups Mobilize the Immigrant Vote and YVote. “For the first time in a generation, the Trump election made young people feel like there are repercussions for elections. And because of Parkland in particular, there is an activation of 16- and 17-year-olds.”

Holtzman’s experience supports Sanchez’s argument. He first became politically aware in 2012 after Adam Lanza murdered 20 children between 6 and 7 years old at Sandy Hook Elementary School in Newton, Conn. His father, Eric Holtzman, was a college classmate of Nicole Hockley, who lost her 6-year-old son Dylan in the massacre and went on to found Sandy Hook Promise, which has become one of the nation’s leading gun violence prevention organizations.

In 2016, after Omar Mateen killed 49 people and wounded 58 others inside an Orlando nightclub, Ben Holtzman got involved with the Brady Campaign to Prevent Gun Violence, but had trouble getting his peers engaged.

“The difference between Orlando and [Parkland] is that this time the conversation didn’t end,” he said.

Though she can’t vote, Antunez feels like she is part of the conversation. She was working Sunday as a member of the San Diego Public Defender’s Youth Council, which includes youth from a half-dozen city schools that primarily enroll students from underserved populations.

“Now, more than ever, it’s important to get people involved,” she said.

Assemblyman Evan Low, D-San Jose, is happy to see young people getting involved. But, he said, there is one more law change that would do more than all the others combined — lowering the voting age to 17. He tried last year to convince a necessary supermajority of the state Assembly to approve a ballot measure that would give voters a chance to do just that, but failed by two votes.

The bill could be revived this year, but Low says he doesn’t currently have the votes mainly due to the resignations of several state legislators in recent months following allegations of sexual harassment.

If such a ballot measure passed, it would fundamentally change how politics is practiced in California, Low said. This is because while many 18-year-olds are in a state of transition between graduating high school and going off to college or work and therefore less likely to vote; most 17-year-olds are still in high school, lead less complicated lives and are a captive audience for anyone trying to influence their vote.

“Why do politicians never come to high schools but always go to senior centers? That is not by accident,” Low said. “If we had 17-year-old voters, politicians would come to classrooms and cater to the interests of young people.”