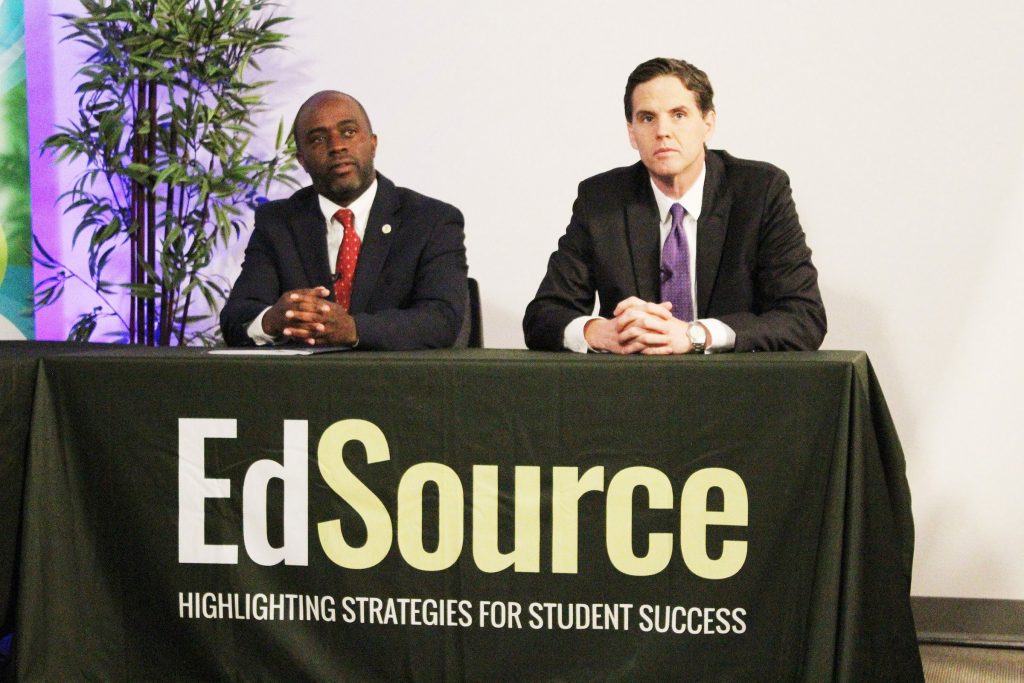 Marshall Tuck and Tony Thurmond, the two leading candidates for state superintendent of public instruction, are of one mind on many fundamental educational challenges in California, like the need for more school funding, the importance of solving a teacher shortage, and a focus on closing disparities in achievement.

Their strategies in confronting those challenges often read like variations on the same theme — informed by different personalities, backgrounds and job experiences, not disagreements over policy. Tuck, a school reformer, has been as an administrator of Los Angeles charter and district schools. Thurmond, a social worker, is a two-term Assemblyman.

The state superintendency is a non-partisan office, but both Tuck and Thurmond are Democrats.

But the retirement of Gov. Jerry Brown, who used his veto power to ward off challenges to charter schools, has created uncertainty about their future, magnifying the differences Tuck and Thurmond do have. And it his fueled a flow of millions of dollars in campaign contributions to independent expenditure committees supporting the candidates: $6.5 million so far largely from advocates of charter schools, who support Tuck, and $3 million from critics of them, led by the California Teachers Association, which backs Thurmond.

Tuck is more emphatic in defending parents’ right to choose a charter school, but neither he nor Thurmond would characterize himself as pro- or anti-charter. Both favor banning for-profit charter schools and shutting down those that consistently perform poorly.

But scratch deeper, and differences emerge.  On one issue expected to go before the Legislature next year, Tuck opposes letting districts reject a charter school it decides could have a negative financial impact on a district. Thurmond reframes the question in a way that charter defenders find problematic at best: He would condition opening a new charter school on compensating a district for the financial loss of revenue.

State superintendents have little direct authority over charter schools, but their opinion could help influence the debate.

Tuck also has fought the California Teachers Association on workplace laws. As CEO of the semi-autonomous Partnership for Los Angeles Schools, he helped instigate a lawsuit in 2010 that challenged teacher layoffs in Los Angeles Unified based on seniority, which led to massive layoffs in several Partnership schools. Tuck argues seniority should be one factor, not the sole factor, in teacher layoffs. The CTA defends the current state law.

The table above lays out the candidates’ positions on a range of issues, based on interviews with EdSource and the education plans they have posted on their campaign websites (go here for Tuck’s and here for Thurmond’s). An asterisk indicates an area of significant difference.