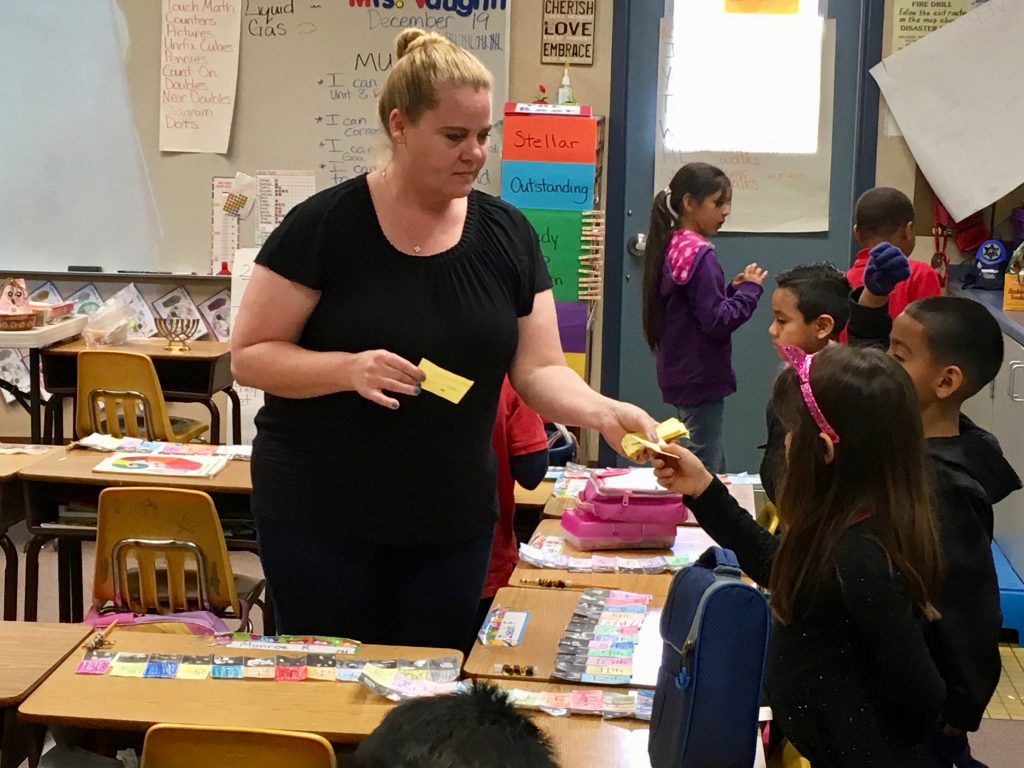 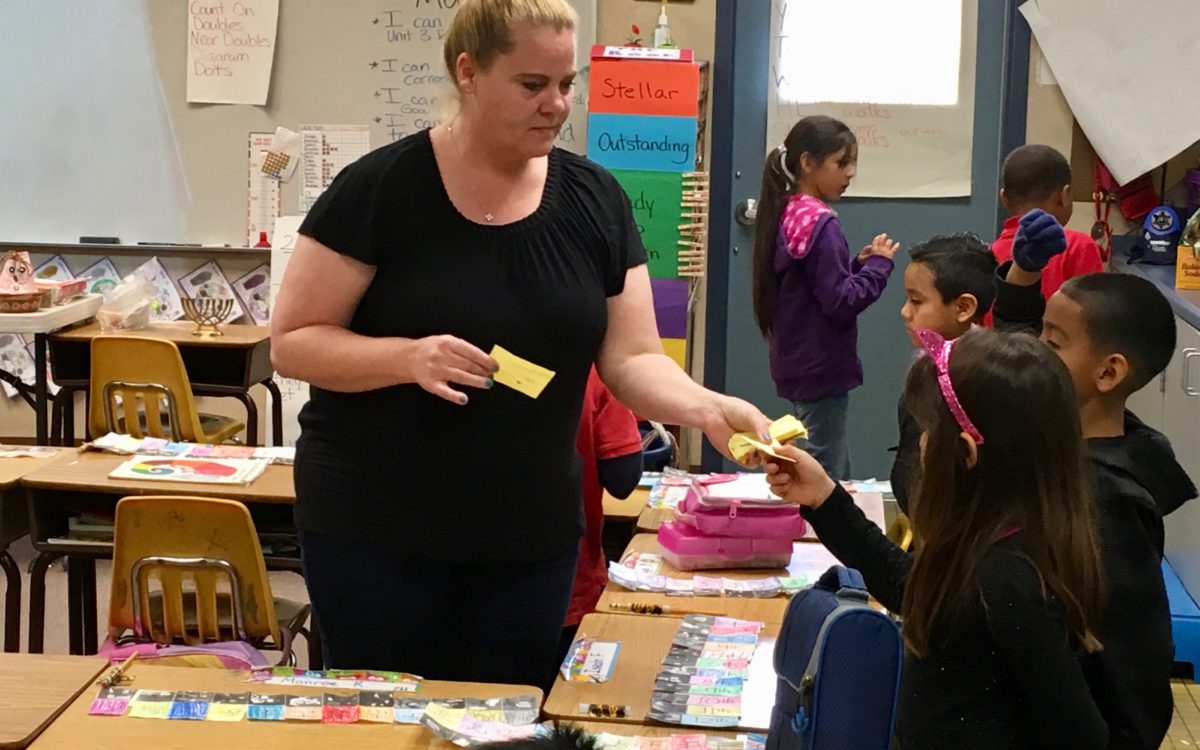 Ten-year-old Ja’Vonie Morris sat in her school principal’s office on a recent day — not for the misbehavior that got her in so much trouble back in 3rd grade, but to show off her accomplishments under a schoolwide strategy that used positive reinforcement to help her turn things around.

Before Mission Elementary, a school in Antioch about 35 miles northeast of Oakland, put the rigorous system in place, Ja’Vonie explained, “I would yell. I would kick stuff. I would walk out of the classroom without teacher’s permission. I wouldn’t do my work. I wouldn’t follow directions. I would bother other people.”

Ja’Vonie is now in 5th grade and thriving. Every day, as she complies with the school’s three basic behavioral expectations — be safe, be kind, be responsible — teachers, staff and administrators reward her with tickets that she can spend at the virtual Mustang Market, named after the school mascot. A wall in the low-slung school’s hallway displays the prizes. This year, Ja’Vonie is saving up for the costliest reward of all: a chance to pelt her homeroom instructor with water balloons at the “teacher carwash.” She’ll need 2,500 tickets, and she’s confident she’ll get there.

More than 80 percent of students at Mission Elementary in this growing Bay Area suburb are from low-income backgrounds and are eligible for free or reduced-price lunches. Some have incarcerated parents, or have witnessed violence. When principal Monte Gregg arrived eight years ago, the number of office referrals and suspensions was high, disrespect rampant.

Some parents contributed to the chaos by encouraging their kids to fight.

They would “stop at the sidewalk, tell the kid to get out of the car and beat the other kid,” Gregg said.

Gregg lobbied for a fence around her school so she could better regulate pickups and drop-offs. But what really turned things around, she said, was introducing Positive Behavioral Interventions and Supports in 2014 to better manage school discipline and improve school culture for all students. The Antioch Unified School District rolled out the approach in a number of other schools that same year.

The approach sets clear behavioral expectations for all students and rewards them daily for complying, through ticket systems like the Mustang Market. It also establishes specific consequences for violations of that code of conduct that are applied equally to all. And it requires detailed data tracking and analysis of student behavior problems.

Research shows that successfully implementing the approach reduces suspensions as well as overall behavior problems that result in student referrals to the principal’s office. It can improve academic performance, attendance, and the ability of students to regulate their emotions and behave in socially appropriate ways. It also enhances students’ perception of safety and reduces teacher burnout.

A 2012 EdSource survey showed that PBIS was by far the most popular behavior management system in place in California school districts. But the practice has grown substantially since then, according to the California PBIS Coalition, formed in 2011 to help districts implement the framework reliably.

The coalition only includes schools in its tally that use a web-based data system developed by researchers at the University of Oregon to track behavior, so its numbers are likely an undercount. But they show Mission Elementary among 2,500 California schools — or 1 in 4 — now committed to the rigorous framework. That’s up from 1,000 five years ago. An emphasis on school climate and culture in the state’s Local Control Funding Formula has helped drive the growth, as has a similar focus in the federal Every Student Succeeds Act, which is phasing in over the coming year.

The year before Mission Elementary began to implement PBIS, the school logged 68 suspensions. Last year, the tally dropped to 12 — an 82 percent reduction. That helped Mission Elementary win a platinum award from the California coalition last spring.

Michael Green, the Antioch Unified School District’s lead PBIS facilitator, said in the past the district was “able to show that when suspension numbers were down, academic numbers were up.” But the gains never lasted. With a suspension rate triple that of most districts in the county, and a history of complaints of discriminatory discipline against African-American students, Antioch Unified signed on for PBIS training.

The approach was first developed to improve behavior among special education students. But starting about two decades ago, researchers began adapting it for schoolwide use, said Robert Horner, a professor emeritus of special education at the University of Oregon who helped devise the approach and co-directs the national Technical Assistance Center on PBIS.

The goal is not just to correct bad behavior but to create a positive school environment where all students — among them special ed students, English learners, students impacted by trauma, as well as high achievers — develop the social, emotional and academic skills to learn and thrive. That means schools no longer have to target student subgroups separately.

“We can’t afford to have 19 different ways of doing education,” Horner said.

The approach has three tiers: The first promotes positive behaviors schoolwide and lays out rewards for complying as well as consistent consequences for failing to do so. Those basic “do’s” replace the list of “don’ts” and punishments prevalent in many schools — don’t chew gum, don’t swear, don’t wear hats.

“How could [students] know all five pages of what the school doesn’t want [them] to do?” said Michael Lombardo, a steering committee member of the state coalition and head of prevention supports and services for the Placer County Office of Education, which provided Antioch Unified’s training.

At Mission Elementary, precisely what being safe, kind and responsible looks like in the classroom, the hallways, the cafeteria, and elsewhere on campus is detailed in the staff handbook, called the “Folder of Awesomeness.”

The Tier 2 response consists of heightened monitoring and feedback for groups of students whose behavior isn’t improving. At Mission, Ja’Vonie was among them. The school enrolled her in a program called “Check-In, Check-Out.” At every hour of every day, teachers filled out her “Mustang memo” to reflect how well she was meeting the three core expectations.

That feedback, said Ja’Vonie, “helped me do what I was supposed to be doing in class. It helped me get along with adults and other people.”

The third and final tier of intervention — for students who still don’t respond — is intensive individualized support, which could range from a tailored behavior plan to mental health services.

California has now implemented PBIS in a greater number of schools than any other state, not surprising given its size. But it’s a relative late-comer to the approach. More than two dozen other states use it in a larger percentage of schools, according to the national Technical Center on PBIS, funded by the U.S. Department of Education.

Los Angeles Unified was among the first in California to implement PBIS, in 2007. Nearly four dozen Oakland Unified schools have rolled it out since 2013. Districts from San Diego to Salinas to Eureka use it too, as more sign on at a steady clip.

On a recent Wednesday, one of Lombardo’s trainers, Kerri Fulton, arrived at the Twin Rivers Unified School District in Sacramento County to walk through basics with four newly formed school teams. District administrators learning to be trainers joined too.

“We’re constantly dealing with [bad] behavior all day, kids running out of class, hitting other kids, hitting adults,” said Sarah McElroy, school counselor for the K-8 Oakdale Elementary School, which has posted some of the highest suspension rates in the district and hopes that PBIS will turn things around.

The topic for the day: devising a consistent consequence system. Teams must reach consensus, Fulton explained, on which behaviors are so minor they can be addressed by teachers or staff without being logged into the online data system, which rise to a level that should be logged, and which are considered major, meaning they are referred to the principal’s office as well as recorded.

The data system the coalition recommends asks what happened, where, at what time of day, with whom and a best guess as to why. Was the student seeking adult or peer attention? Seeking to avoid it? Trying to attain something?

“You can’t just say, ‘the hallway’s out of control,’” said Fulton, who urged trainees to analyze and share data schoolwide at least monthly.

Gregg agrees, saying PBIS has provided a framework she can bolster with complementary approaches. She has added restorative practices as well as “Toolbox,” which teaches young students social and emotional skills. Ja’Vonie’s favorite is the “breathing tool,” which helps her calm down when mad.

There have been hurdles though. PBIS is touted for removing racial and ethnic bias from school discipline. But despite the steep drop in suspensions at Mission Elementary, of the 12 carried out last year, 10 — or 83 percent — were of black students, who represented about 25 percent of student enrollment.

Last fall, budget cuts eliminated coaching from Lombardo’s group, so Green, the district’s PBIS facilitator, is supporting Antioch schools on his own. Also cut: the $350-per-year data tracking system Mission Elementary and other schools were using. By December, Gregg had suspended nine students — an increase compared to the same period of time last year.

As for Ja’Vonie, she now helps a 3rd-grade boy on the “Mustang memo” program. When he got kicked out of class not long ago, she says, she explained to him that he “wasn’t being kind or respectful to his teacher.”

“Sometimes I tell him, ‘I used to act how you’re acting,’” Ja’Vonie said. “‘But if you change, and listen to your teachers, good things happen.’”