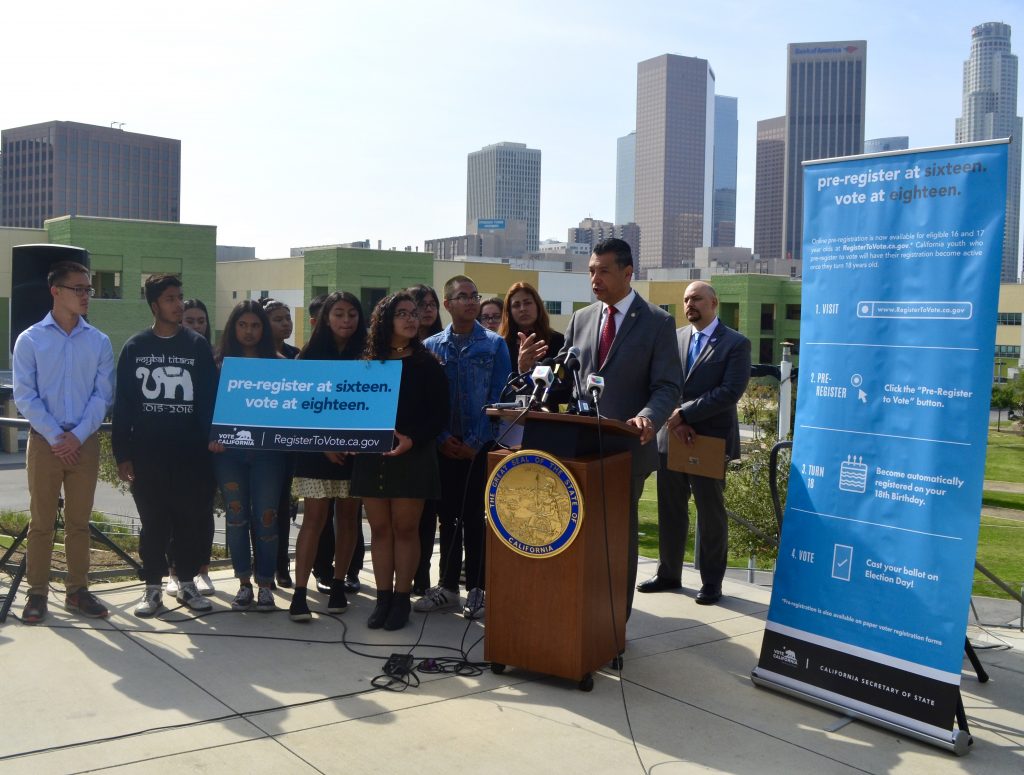 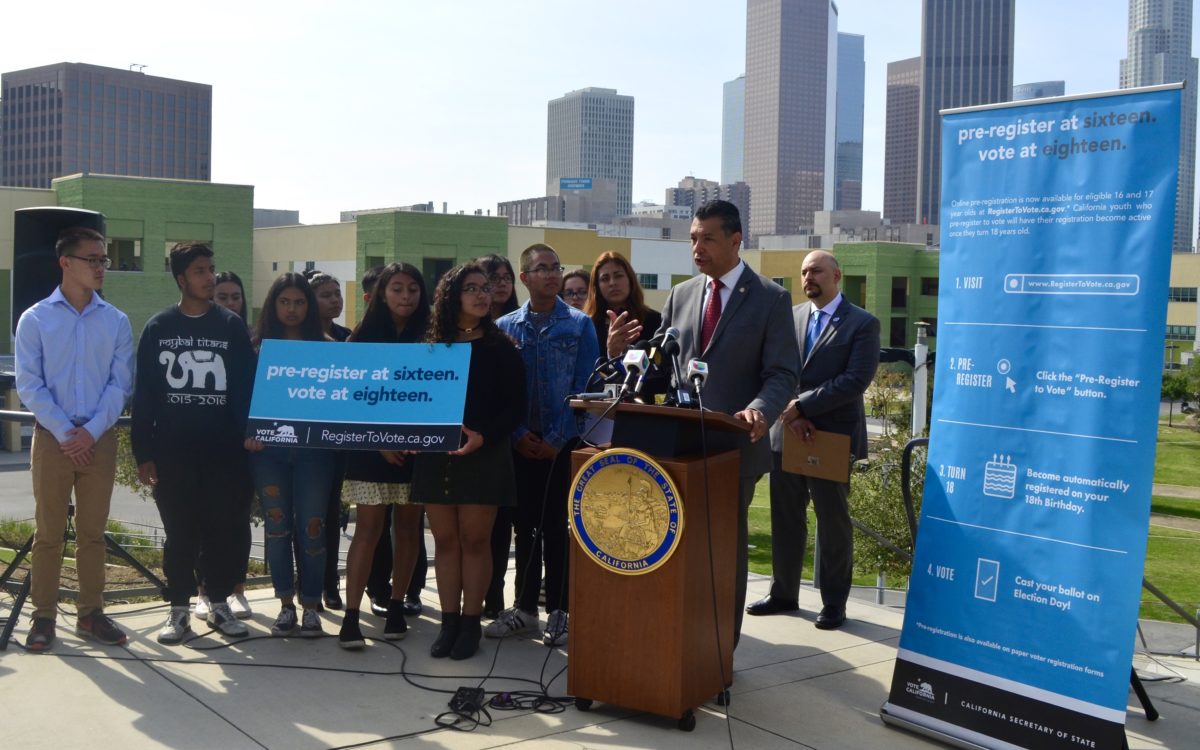 After hundreds of thousands of students nationwide walked out of their classrooms on March 14 to protest a mass shooting at a Parkland, Fla., high school, an open question hung over their discontent: Will the students channel this energy into political activism?

In California, there’s new evidence that the answer could be yes. In the three weeks since the March walkouts, there’s been a surge in potential new voters with the pre-registration of 7,090 16- and 17-year-olds between March 14 and April 2.

“The uptick in activity is undeniable,” said California Secretary of State Alex Padilla in an interview with EdSource. “Prior to the Parkland shooting … we were averaging about 1,000 pre-registrations a week,” he said. “The week of the school walkouts, March 14, that figure tripled. And same with the week of the March for Our Lives, and even last week.”

Padilla spoke Friday at the Edward Roybal Learning Center in Los Angeles where he encouraged even more students to get civically engaged and to highlight the new pre-registration numbers.

“You’re also the leaders of today,” he said to a dozen students standing beside him who had previously pre-registered to vote. “You’re already changing the world. So I want you to continue to be active, continue to fight, and continue to organize. … And when you turn 18, vote and vote in every election.”

At some of the walkout events on March 14, students urged their peers to become involved politically by pre-registering to vote. The students marched in solidarity with students at Marjory Stoneman Douglas High School in Broward County, Fla., where 17 students and teachers were killed on Feb. 14 in the second-deadliest shooting at a U.S. public school.

Padilla said many students were motivated by the 2016 elections to become more politically active. That’s true for Roybal senior Alison Serrano, 17, who cited President Donald Trump’s actions to end the Deferred Action for Childhood Arrivals program as one reason for pre-registering. She’s attended marches for women’s rights, DACA protections and the Black Lives Matter movement. “Even before Parkland there were school shootings … I feel like all those issues motivated me to bring out the activist in me and actually make a change.”

Her friends are feeling the civic spirit, too, she said. “We’re all minorities and feel like there needs to be a change and that things aren’t being handled fairly.”

While 16- and 17-year-olds who are citizens and state residents have been able to pre-register since 2016, most of the sign-ups occurred after March 2017, when teens were able to pre-register online. In March of 2018, Padilla’s office announced that nearly 90,000 teenagers pre-registered since September 2016.

The latest data, released Friday, show that more than 11,000 have signed up since March 8, bringing the total of 16- and 17-year-olds who pre-registered to 100,111 since pre-registration began in September 2016. Los Angeles, the state’s most populous county, accounted for 26,179 of those who pre-registered since 2016.

California youth who pre-register are automatically registered to vote once they turn 18.

Most of the state’s teenagers are pre-registering as either Democrats — at 38 percent — or with no party preference — at 43 percent. Ten percent are pre-registered as Republicans.

Allowing teenagers to pre-register is part of an ongoing effort in California to promote civic activity among youth. In 2014 Governor Jerry Brown signed Assembly Bill 1817 into law, designating the last two full weeks in April and September as High School Voter Education Week. The law allowed high schools to appoint students as voter outreach coordinators to encourage students to register to vote. In February Gov. Brown signed into law a measure that automatically pre-registers 16- and 17-year-olds who obtain a driver’s license or state identification card. That law takes effect in January 2019.

This week, Padilla’s office also unveiled a new website connecting students to civic engagement opportunities, such as participating in mock elections and serving as poll workers on election day.

Just how many of the eligible teenagers are pre-registered is hard to say. According to 2016 U.S. Census data, the state had 1.03 million 16- and 17-year-olds, though that figure included all residents, not just citizens.

Registration is just the first step in voting. A 2017 report by the Public Policy Institute of California noted that California trails the rest of the country in voter registration, a trend that began sometime in the late 1990s. The state has also seen a decline in turnout for mid-term elections while turnout for presidential elections has been flat. The 2014 primary and general elections saw record low turnouts.

Some Los Angeles Unified School District students aim to improve those midterm numbers. Benjamin Holtzman, a senior at Alexander Hamilton High School and a student member on the Los Angeles Unified school board, is helping to plan pre-registration drives at roughly 30 public, private and charter campuses on April 20, the next in a series of student political activities tied to the Parkland shootings. The April event will fall on the 19th anniversary of the Columbine shootings that killed 13 students, which at the time was the deadliest school shooting in U.S. history but has since been eclipsed my even deadlier school massacres.

“I think it’s become a much more mature movement,” said Holtzman, who’s pre-registered to vote. “At the beginning I feel like it was much more ‘let’s change something,’ but now that we have the Parkland demands, I think we have actual pieces of legislation that we want to change.”