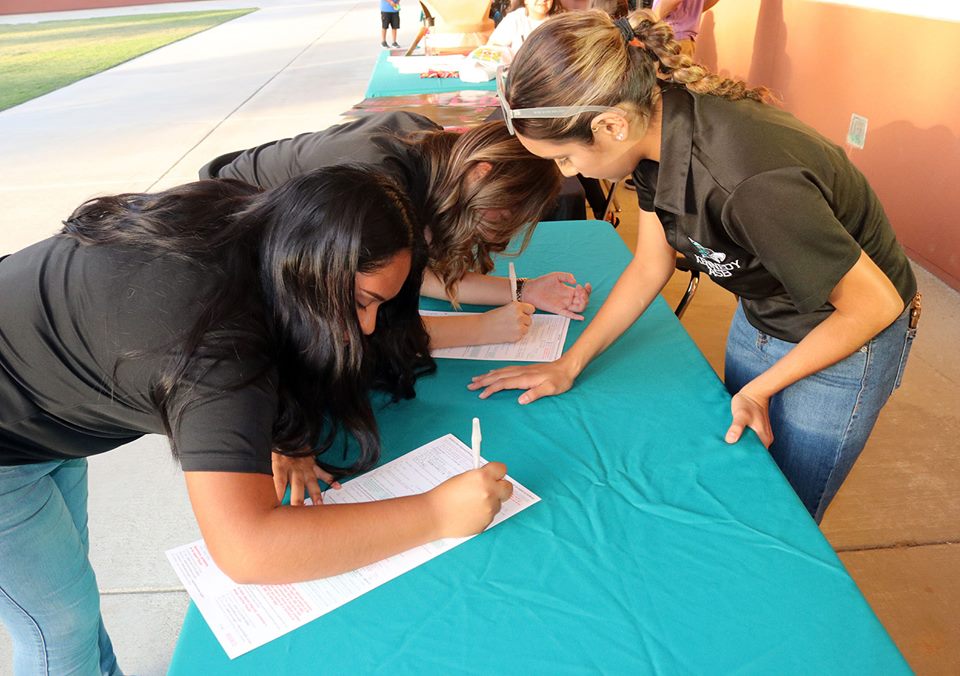 Students and youth advocates working on an ambitious civic engagement and voter registration effort in schools across California’s Central Valley this year have faced resistance from some school administrators as they’ve tried to get into classrooms to do voter education presentations.

The effort has consisted primarily of students from UC Santa Cruz and UC Merced traveling back to their high school alma maters in the Central Valley and, along with high schoolers they mentor, trying to get approval from teachers and administrators to give presentations to American government classes.

They’ve also assisted in organizing voter registration drives on high school campuses and hosted nearly a dozen day-long workshops throughout the summer. The workshops were held while students were on break and during weekends when school was back in session.

The students work closely with Power California, a new statewide advocacy organization that mobilizes young people from diverse racial and ethnic backgrounds to vote and become involved in civic affairs. It was formed this year through the merger of Yvote and Get Out The Immigrant Vote, two longstanding advocacy groups focused on increasing voter turnout among historically disenfranchised communities.

This is one of several efforts this election season aimed at increasing turnout among young voters. Another is NextGen Rising, which focuses on college campuses and is led by progressive Democrat and billionaire Tom Steyer. Power California is also hosting a youth voting event this week in partnership with the Los Angeles Unified School District and the Los Angeles County Registrar of Voters.

The activities in the Central Valley come as the region has emerged as a key battleground for control of the U.S. House of Representatives in this year’s intense mid-term election. Issues like the Trump administration’s stances on immigration have the potential to drive new and younger voters to the polls in a region where turnout has consistently lagged the statewide average.

California is now one of the most active in the nation when it comes to voter education and promoting youth voting. In 2013, Gov. Jerry Brown signed into law a state Assembly bill mandating that voter education be included in high school American government and civics classes. Schools must teach students about the importance of voting, how to register to vote and how to understand voter information handbooks and other materials in order to “become an informed voter.”

In 2014, Brown signed another Assembly bill that established High School Voter Education Weeks, which are held during the last two weeks of April and September each year. California is also among a growing number of states that allows 16- and 17-year-olds to pre-register before they are allowed to vote after their 18th birthday.

Youth advocates see their work in Central Valley schools as a way of ensuring that both the spirit and letter of these laws are followed in communities with large immigrant populations and historically low voter turnout, especially among young people. Kern County, for example, is home to more than 95,000 people ages 18-24, but only about 4,800 of them voted in the June primary election, according to Power California.

Presentations delivered by the University of California and high school students go beyond the basics of voting and delve into the history of unequal voting rights in immigrant communities, voter suppression efforts, the voting rights of convicted felons and how undocumented students, who can’t register to vote, can still participate in voter registration drives and advocate for better voter education.

Some teachers and school administrators see the inclusion of these subjects as potentially crossing the line from voter education into partisan advocacy. They say they’d rather the events be held by established nonpartisan organizations like the League of Women Voters or as a joint effort by the on-campus Democratic and Republican student groups.

While the students say dozens of teachers have approved the classroom presentations, in several instances they say they’ve been rebuffed by either teachers or school administrators. In one such case, a student said she was allowed in but said administrators censored the presentation. Others have been barred from passing out flyers on campus advertising the workshops.

“We’ve had students who’ve had a hard time in some schools,” said Veronica Terriquez, a UC Santa Cruz sociology professor who oversees the voter education program. “They were told they were not allowed to do this work in schools, even though the secretary of state encourages voter education.”

Terriquez is referring to Secretary of State Alex Padilla, who has made registering and pre-registering young voters one of his top priorities. He’s held a number of events at high schools and late last month announced that the number of 16- and 17-year-olds pre-registered since late 2016 had eclipsed 200,000.

“The Secretary of State supports nonpartisan efforts to encourage student voter registration and participation throughout California,” said Padilla spokesman Jesse Melgar in a statement sent to EdSource after this article was published. “That’s why we’ve partnered with school districts, nonpartisan organizations like Power California, and community groups to speak to tens of thousands of students.”

When UC Santa Cruz senior Lydia De La Riva-Ochoa returned to Central Valley High School, her alma mater in Ceres, she got approval to do a voter education presentation. But when she presented the slideshow to the administration for review, she said they told her to take out several slides having to do with the voting rights of convicted felons and how undocumented people can play a role in voter education.

“They took out about five of the slides,” De La Riva-Ochoa said. “I felt a sense of disbelief…here was this place that is supposed to educate students and they were taking out slides that simply had information.”

She said she was the most surprised by the decision to censor the slide on the voting rights of people who have been incarcerated. “Even if it doesn’t apply to students, it could apply to their family members,” she said. “Not giving students that information was baffling, honestly.”

School officials referred questions to Jay Simmonds, the Ceres Unified School District’s assistant superintendent of student support services. Simmonds said he wasn’t aware of the decision to censor the presentation, but did say that he’s made it clear to administrators that he didn’t want voter registration efforts in the district to be “politicized.”

“I don’t understand why [administrators] would remove those slides — especially the felon slide — but they do know that I’m cautious about the whole thing,” Simmonds said, referring to outside groups coming on campus for voter education.

While Central Valley High appears to the be only school where presentations were censored, students in several places, including Bakersfield, Delano, Exeter and Avenal, say they were denied opportunities to make classroom presentations or pass out materials advertising voter education events.

Jose Barraza, a senior at Avenal High School in Kings County, said he tried for weeks to get permission to pass out a flyer advertising the Avenal Youth Summit, a civic engagement event that was held on the school’s campus in late August. Though he got permission from several teachers to pass out the flyer, he said Principal Juan Ruiz refused to give his approval.

Barraza said he was frustrated because he did as he was told at each step in the process, but was still rebuffed in the end. “It was definitely a waste of my time,” Barraza said.

Ruiz did not respond to several calls and emails from an EdSource reporter seeking comment.

At Exeter Union High School in Tulare County, Principal Robert Mayo said he remembers an outside group asking for access to do the presentations, but had concerns about partisan content and whether they would detract from work teachers were already doing.

“I remember talking to my government faculty about whether we should bring in an outside group,” Mayo said. “The staff said it wasn’t necessary because they already present that information.”

Delano, located in Kern County, is among a few places — Stockton and Merced being two others — where youth advocates facing challenges getting into schools turned to school boards to pass resolutions affirming that voter education should be a priority.

The Delano Joint Union High School District resolution was proposed by Arnold Morrison, a board member who has taught elementary school in the area for 40 years. He said it is the responsibility of schools to show young people how voting is relevant in their lives.

“It is necessary because they are often children of immigrants and not being exposed to the voting process in the home,” Morrison said.

But left unresolved in many districts is what voter education should actually consist of — allowing outside groups to staff registration tables, in-class discussions led by teachers, or outside groups presenting information that also delves into issues like voter suppression and the ongoing struggles of minority communities for voting rights.