Voting rolls are getting younger in California as pre-registration of teens tops 200,000 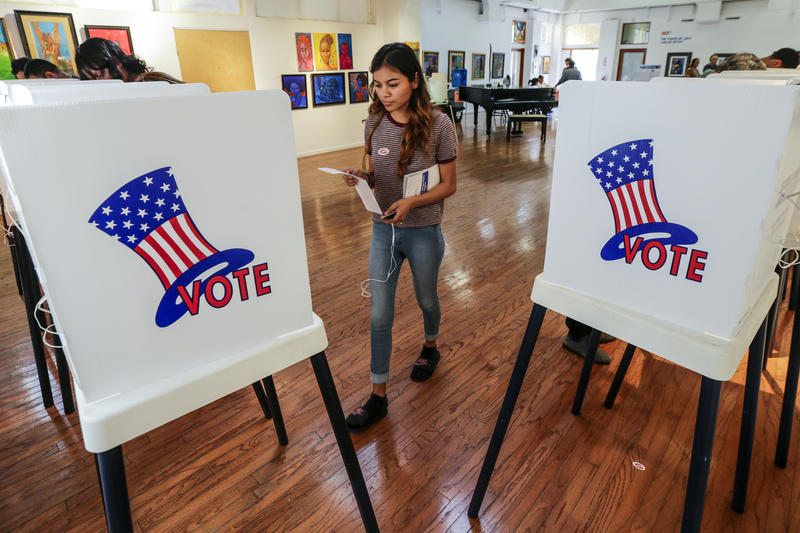 More than 200,000 California teenagers have pre-registered to vote since 2016, further evidence that the youth vote might play a larger role than usual in this year’s mid-term elections.

The pre-registration milestone, announced Tuesday by Secretary of State Alex Padilla during a news conference at Francis Polytechnic High School in Los Angeles, includes 100,000 pre-registered voters who will be 18 by the November election and eligible to vote.

“This is not only a huge number, but it reflects the interest and appetite that young people have right now for being engaged in the process,” Padilla said in an interview with EdSource, noting that the number had nearly doubled in less than six months. “We thought we were putting together an ambitious goal — but young people have stepped up.”

Last September, the pre-registration number stood at just under 65,000 and crossed the 100,000 mark in April. The party preference for pre-registered voters skews heavily away from the Republican Party. Nearly half (47.5 percent) have no party preference, about a third (34.4 percent) identify as Democrat and just 9.6 percent as Republican.

California, in recent years, has become a leader nationwide when it comes to educating and registering young voters. Since 2015, 16- and 17-year-olds have been able to pre-register to vote; and this year, thanks to the state’s new motor voter law, teens 16 and up are automatically registered to vote when they get their driver’s license or state ID card.

Other laws require that voter education be included in high school curriculums, provide greater accessibility to polls on Election Day and relax rules regarding registration deadlines.

The question pondered by many is whether all of this will translate into youth turnout in the November election. History is littered with predictions of big youth turnouts that failed to materialize.

Yet there are a number of indications that this year might actually be different. The tumult of the Trump presidency, most notably the administration’s racist undertones, its hardline policies against immigrants and rollback of environmental regulations, has mobilized young people in ways that are reminiscent of the 1960s.

The turnout among voters 18 to 35 was 19 percent in the June Primary — which is nearly three times the turnout of the youngest voters in the 2014 primary, the last off-year election, according to research by Power California, a new statewide nonprofit focused on mobilizing young people of color to vote and engage in their communities.

“There is a different energy right now that in many ways we haven’t seen in generations,” said Luis Sanchez, who is co-executive director of Power California.

Sanchez pointed to a poll of California youth commissioned by Power California in which more than two-thirds of respondents see voting as a “highly effective” way to improve society; and nearly half say voting in elections makes a “huge difference.”

One mistake that has been made in the past by youth activists, said Sanchez and others, is that mobilization efforts often lost steam after registration drives. Now they realize that the outreach is just beginning when a youth is registered.

“There is this assumption that young people know how to vote and they know all the rules and regulations for voting,” Sanchez said. “But our research has shown us that they don’t know where to start.”

Sanchez said Power California is responsible for approximately 50,000 of the 200,000 total pre-registrations since 2016, including about 25,000 in Los Angeles. And over the summer the organization sent nearly 15,000 texts to young people who are pre-registered, reminding them about the Nov. 6 election and giving them information about voting.

They’ve also set up phone banks that operate from Thursday through Sunday every week. “We’re calling places like Pico Rivera (in LA County) and Colton (in San Bernardino County), where young people have never gotten a call, or had a conversation about voting,” Sanchez said.

Another area of focus for youth advocates has been the Central Valley, the largely agricultural region between Bakersfield and Sacramento that has historically had extremely low turnout. They see it as crucial to their efforts because of its large youth population.

This summer, 99Rootz, an off-shoot of Power California, has been working with UC Santa Cruz sociology professor Veronica Terriquez on a youth education and mobilization effort that they’ve dubbed the Central Valley Freedom Summer, a nod to the legendary 1964 effort to register black voters in Mississippi.

The Freedom Summer included more than a half-dozen weekend conferences that included panels on civics, voting rights and some of the key issues, including immigrant rights and environmental justice, that the region’s young people identified as important to them.

Organizers also did presentations for high school summer school classes and visited a number of classes at the beginning of the school year. All told, the effort reached about 5,000 young people, Terriquez said.

“The turnout in many of these communities is so low that turning out recent high school grads and people who just turned 18 can really make a difference in an election,” she said.