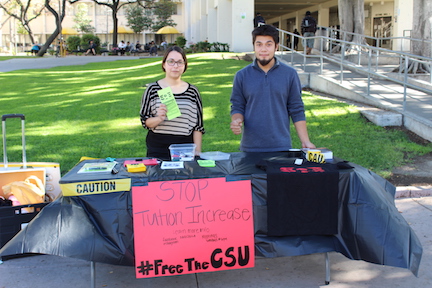 Leaders of the 23-campus California State University system have decided not to increase tuition for the 2018-19 school year, cancelling a planned $228 hike in response to commitments from the Legislature for more state funding.

Cal State system Chancellor Timothy White announced Friday that the university will drop its previous proposal to raise undergraduate tuition by $228, or 3.9 percent, to $5,970 a year and will instead keep tuition flat. In January, the Cal State trustees were scheduled to consider that hike but then decided to postpone action until May, in hopes that more general revenue money would be allocated from the state’s anticipated $6 billion budget surplus.

“I think it’s the fair thing to do but it’s also the right thing to do for California’s future,” White said in an interview with EdSource. He cited the state’s strong economy, which has helped to produce the tax surplus, and the need to expand higher education opportunities while keeping tuition costs as low as possible for students and families. “This is an opportunity to not add to the cost of going to a Cal State University,” he added.

White said he has “no guarantees, no contract” with state legislators about increased funding for Cal State and his announcement did not provide details of a possible budget agreement in Sacramento. But notably, the press release about the tuition freeze included strong statements of funding support from state Senate President Pro Tem Toni G. Atkins and Assembly Speaker Anthony Rendon, the most powerful leaders in the Legislature.

Given such positive statements, White said he thought “there are a lot of signs that give me the confidence that this is the right decision to do now.” He promised that the tuition freeze would remain in place through the 2018-19 school year even if state funding turns out to be worse than expected.

Calling the tuition freeze “good news for California students and for the California economy,” Rendon’s statement said that: “CSU students, faculty, staff and leaders have made a strong case for additional funding — and they are being heard. The Assembly is committed to increased funding for higher education, and will carry this commitment into budget discussions.”

The Cal State system had been seeking an increase of $263 million in state funding for such costs as enrollment growth, pay raises, pension costs and efforts to improve graduation rates. But Brown’s budget had offered a $92 million increase for next year, which is $171 million less than Cal State says it needs. The now-abandoned tuition increase proposal would have filled that hole partly.

Atkins said she was “pleased with the CSU’s decision not to pursue a tuition increase for the coming year.” Without mentioning details of a budget compromise, she said she pledged “to continue our work in the Legislature to lower barriers and reduce the cost of quality higher education for all students.”

Student leaders were delighted with the tuition freeze announcement.  “It’s an exciting day for CSU students,” said Maggie White, president of the California State Student Association, which represents all Cal State schools.  But while she is happy “that students’ voices have been heard and that the tuition increase proposal has been taken off the table,” White, who is a graduate student at Cal State Stanislaus, cautioned that enrollment and course offerings could be reduced if state funding is not ample enough.

Mia Kagianas, president of Sacramento State’s Associated Students, the student body organization, said that word that tuition would not rise “felt like a relief… that all of our efforts went to good use.”  The student group had organized letter writing campaigns to Gov. Brown, contacted legislators and held forums on campus to get the word out about the impending tuition hikes.

Kagianas said she’s collected more than 75 postcards from current and former students urging Brown to increase funding for Cal State. On one postcard, a student wrote: “My mom is my only parent. She makes $13,000 annually before taxes. … I know 200 or 300 dollars isn’t a lot to you, but how do you think my mom or I feel when being a college student becomes more and more of a dream than a reality?”

Brown in recent months has said he opposed boosting funding beyond his original offer and that both the Cal State and the University of California systems should drop tuition increase proposals and instead save money through reforms such as more online classes. Whether Brown’s position on higher education funding has changed will be evident May 14 when his revised state budget, the final one in his years as governor, is scheduled to be released.

H. D. Palmer, a Brown administration spokesman for the Department of Finance, said Friday that “no final decisions have yet been made on any changes” to the governor’s January budget proposal.  He noted that the increases proposed by the governor in January would provide Cal State with $1.6 billion more a year than it received in 2012-13.

Like their UC peers, Cal State trustees and administrators have visited Sacramento a lot lately to lobby the Legislature and the governor for additional dollars. There was a precedent: a previous agreement for extra state funding in exchange for tuition freezes held for five years — until last year. Then tuition rose $270, or about 5 percent at Cal State, and $336, or 2.7 percent, at UC.

UC has proposed raising 2018-19 tuition and systemwide fees by $342, to $12,972 for California undergraduates, but also decided to postpone a decision until at least May in hopes of more state dollars. UC officials say that talks and lobbying are continuing in Sacramento but that it remains uncertain whether they too will be able to make a similar announcement about a tuition freeze.