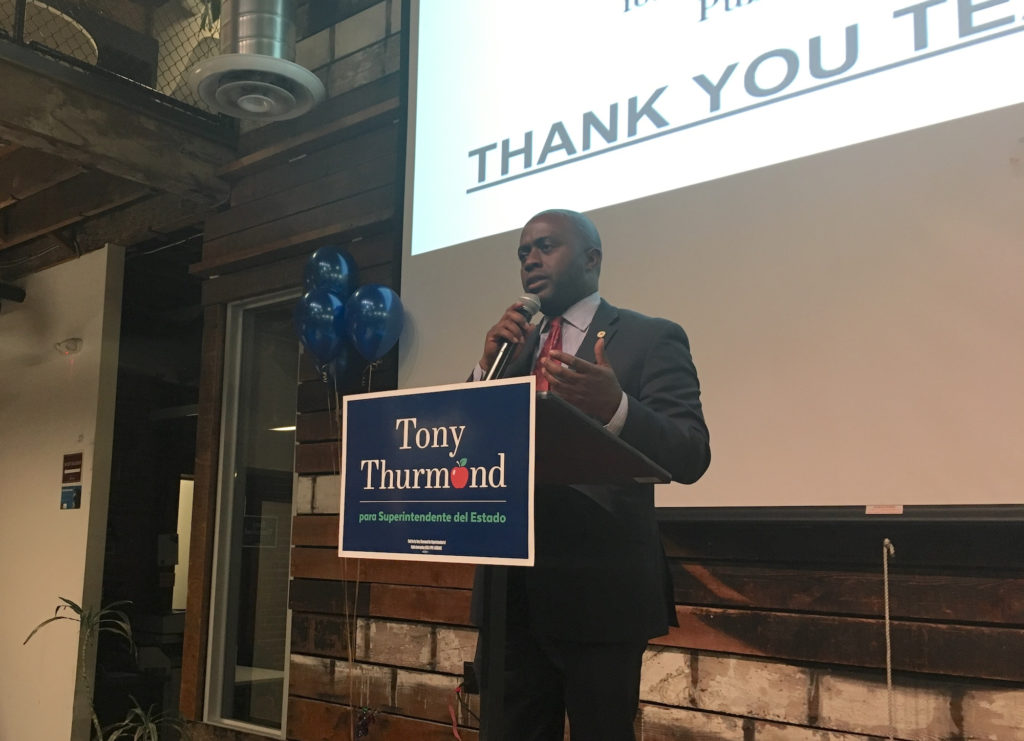 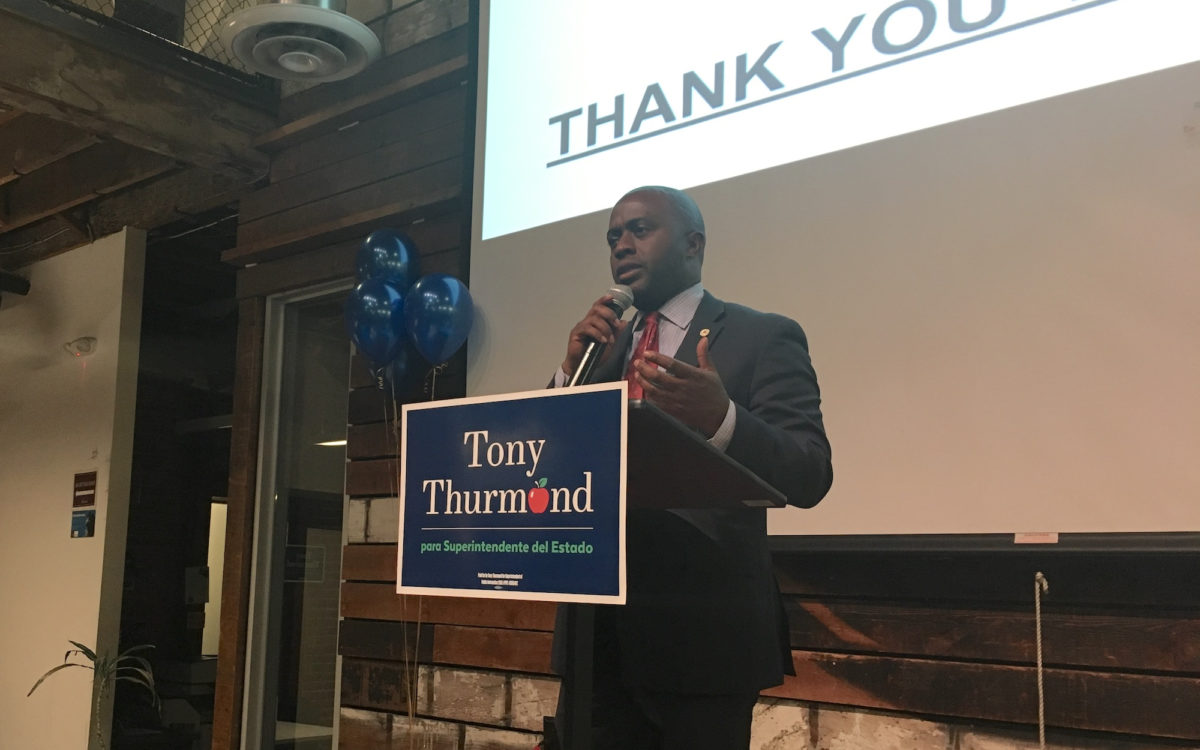 On election night, things did not look good for Assemblyman Tony Thurmond, D-Richmond, in his bid to become California’s next state superintendent of public instruction.

His opponent Marshall Tuck had markedly outspent him both in direct contributions to his campaign and in television ads and other activities funded by outside committees by a more than 2-to-1 margin. In late night election day returns, Tuck led by nearly 86,000 votes.

But millions of votes had yet to be counted — mostly in mail-in and provisional ballots — and these contained the votes that quickly erased Tuck’s lead, and pushed Thurmond to victory on Saturday.

Thurmond’s come-from-behind win represents a major victory for teachers unions and their allies — and an equally major defeat for charter school advocates attempting to elect someone they hoped would  be more sympathetic to their cause.

Tuck, the former head of a charter school network in Los Angeles, insisted that he was not a dogmatic backer of charter schools, and supported closing down poorly performing ones. Thurmond said he supported high quality charter schools, but wanted more transparency and accountability from them along with a possible “pause” in their expansion. But charter forces saw Tuck as a far more favorable candidate than Thurmond, who had been endorsed by their political foe, the California Teachers Association.

Thurmond’s win was crucial for the CTA in the aftermath of the U.S. Supreme Court’s Janus ruling in June that union members not wanting to join their union no longer had to pay “agency fees” — a decision that threatens to reduce the CTA’s membership, revenue and clout at the ballot box.

But on Saturday, CTA president Eric Heins welcomed Thurmond’s victory with satisfaction, noting that electing him and Newsom had been the CTA’s “top priority.”  Despite the narrowness of the win — Thurmond currently leads Tuck by 1.6 percentage points — the CTA can send a strong message to its members, telling them that their dues matter, helping elect a governor and a superintendent who’ll have their backs.

Both Thurmond and Tuck were strong campaigners, with Tuck making the case for a need to break with the education “establishment” in the state, and Thurmond with a compelling personal story and a childhood filled with challenges matching those of many of the students in California’s schools. His background as an advocate for education issues in Sacramento, and as former school board member and social worker who had worked with marginalized young people also strengthened his credentials for the position.

But Tuck came into this race with high expectations from his supporters. Arguably, the race was his to lose.

That’s because four years ago, as a virtual unknown outside a small base of politicians and educators in Los Angeles, he came close to unseating incumbent state superintendent Tom Torlakson.

This year, with more name recognition, and the prospect of renewed backing from the pro-charter billionaires, Tuck’s chances looked even better. This time he was not running against an incumbent, but instead against a state assemblyman with relatively little name recognition beyond his own East Bay district. Even there, Thurmond was only in his second two-year term as an assemblyman, and hardly a household name.

This morning at his first post-victory appearance in Sacramento Thurmond acknowledged the uphill struggles he faced in the race.  By giving up a safe Assembly seat, “everyone told me I was risking everything,” he said. “I told them our kids were risking everything if they don’t get a great education.”

But working to Tuck’s disadvantage — and to Thurmond’s advantage — is that since 2014 the political terrain in California has changed profoundly, largely driven by the election of Donald Trump.

In 2018, Tuck faced an energized Democratic base. Millions more voters turned out, many of them younger and more diverse than four years ago. In 2014, some 6 million people cast ballots in the superintendent’s race. This year, the total will be about 10 million once all the ballots are tallied.

All this translated into a “blue wave” that swept across California, and led to extraordinary Democratic gains, including in some of the most heavily Republican portions of the state.

Unlike any other statewide office, the superintendent’s position is a nonpartisan one. Like Thurmond, Tuck is a Democrat, but with nowhere near the connections Thurmond enjoyed. Thurmond was endorsed by dozens of  Democratic lawmakers — notably by Sen. Kamala Harris and House Minority Leader Nancy Pelosi — and by Democratic mayors of numerous cities. Tuck also pulled in endorsements from Democratic elected officials and other Democrats, but nowhere near Thurmond’s scale.

More importantly, Thurmond had the endorsement of the California Democratic Party, with campaign mailers and get-out-the-vote efforts on his behalf. For new, Democratic-leaning voters, that support may have mattered.

A vigorous campaigner, Thurmond was able to ride the Democrat voter turnout surge to victory. That became clear in the uncounted vote tally — those ballots that came too late to be counted on Election Day, or provisional ballots issued at the polling stations themselves.

It’s likely these ballots disproportionately came from newer, Democratic voters. “Republicans very faithfully go to polls more than younger voters do,” said Roger Salazar, president of Alza Strategies, president of a political public relations firm in Sacramento. “The late voters tended to be younger voters, first-time voters, minority voters, so you have a much more progressive electorate who voted late or submitted their ballots late.”

Many of these new voters were likely to be driven by the desire to approve someone who was most clearly in the Democratic camp, which in this race was Thurmond.

The teachers unions and their allies also put up millions of dollars to at least partially offset offensive and inaccurate ads mounted by the pro-charter independent expenditure committee created by EdVoice, a political advocacy organization in Sacramento. These ads were deemed false by Politifact.

From his side, Thurmond’s campaign issued ads implying that U.S. Secretary of Education Betsy DeVos supported Tuck, which was not the case. PolitiFact also rated those ads false.

But the independent expenditure committee set up by EdVoice to back Tuck did get some support from wealthy allies of DeVos. He also had visible support from at least one Thurmond opponent — Bill Evers of the Hoover Institution — who was on Trump’s education transition team.

In the closing weeks of the campaign, CTA and other unions’ independent expenditure committee played to DeVos’ and Trump’s huge unpopularity in California. Their ads implied that a vote for Thurmond was a vote against Trump, and Tuck would carry DeVos’ effort to “privatize” schools. Any hint of a link between Tuck and Trump may have been political poison — especially to voters who aren’t able to sort through the complexities of campaign financing and the candidates’ relatively nuanced views on charter schools.

Although many ballots are yet to be counted, the race is now over. California will now have its first African-American schools chief since the legendary Wilson Riles left office in 1982 after serving three terms. Thurmond’s mother, who died from cancer when he was 6, was from Panama, so Thurmond also has Latino roots as well as immigrant ones, reflecting the backgrounds of the majority of students in California’s schools.

While growing up in poverty, he said on Monday, “the most important public program in my life was getting a great public education  It changed my life.  I could have easily ended up in a California state prison. All I have ever wanted to do is create the same opportunities for young people that were provided to me.”

As for the just completed campaign, he said, “it has been very much like my life, trying to overcome great obstacles.”

This story was updated on Nov. 19 at 6:30 p.m. to include comments by Tony Thurmond at an event in Sacramento on Nov. 19