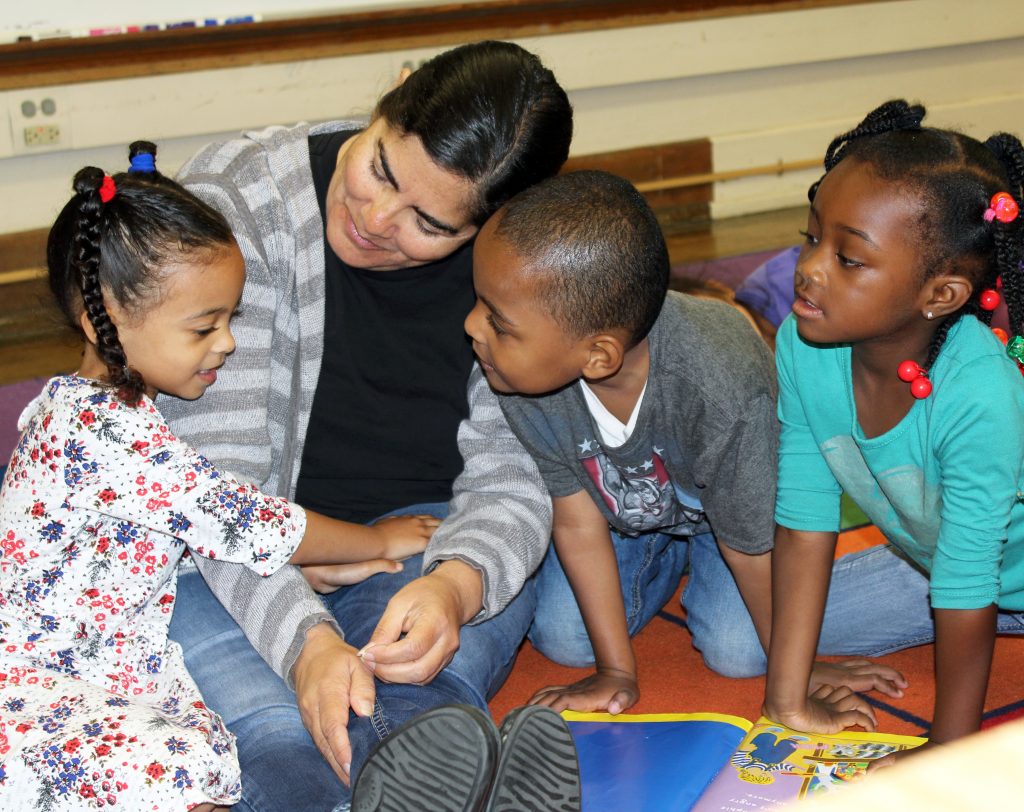 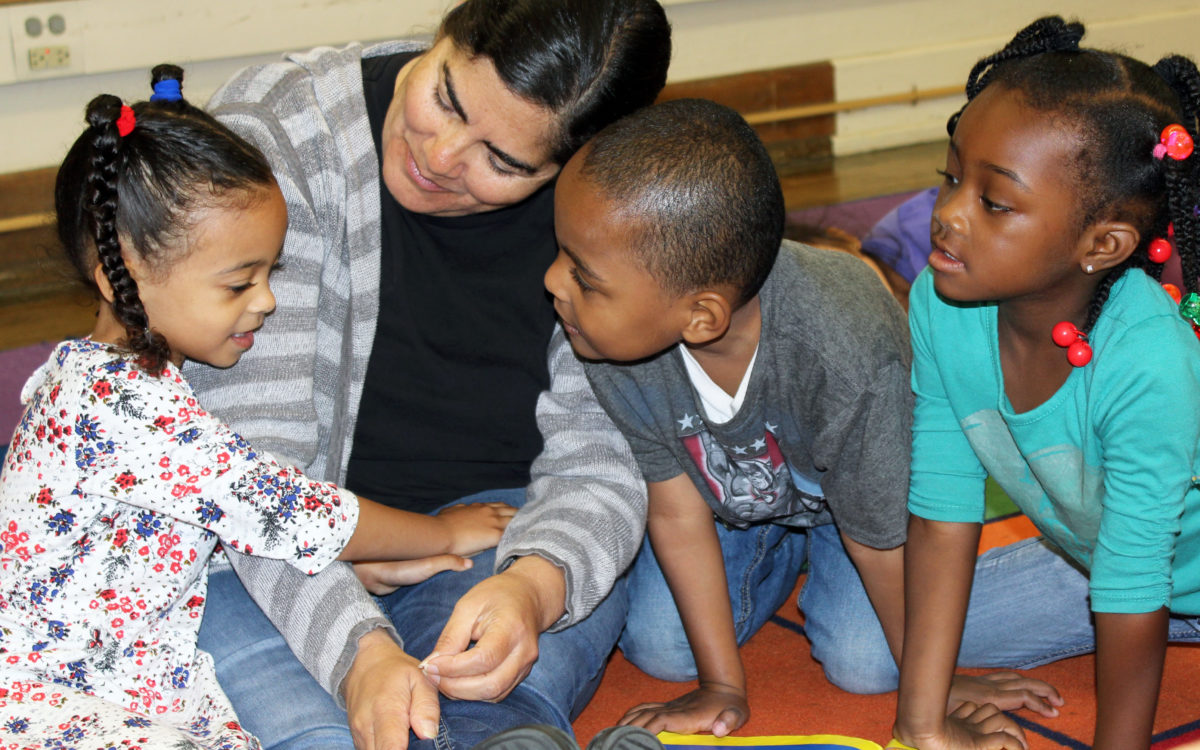 Children coming into kindergarten with no preschool experience may not know how to share or how to wait in line. Many don’t have a firm grasp on numbers, shapes and colors.

This is especially true when children come from poor neighborhoods where there are fewer opportunities to attend programs that teach classroom etiquette and other basics.

Helping these children so they don’t fall behind in social or academic skills has been the goal of a month-long summer bridge program in California’s Bay Area.

The Summer Pre-K camp, located in several schools in East and West Oakland, runs for four weeks and provides free breakfast and lunch as well as parent-and teacher workshops, home visits and dental screenings. It is financially supported by the non-profit organizations First 5 Alameda County and Oakland Fund for Children and Youth.

The program is part of a renewed effort across California to ensure that children without preschool experience are not at risk of falling behind, as the academic requirements for kindergarten increase. Early education advocates say early learning is critical to success in later grades and that research indicates noticeable gaps in skills often occur before a child enters kindergarten.

Many of the children in the program speak a language other than English at home. More than a dozen of the children are from refugee and low-income families — groups that advocates say are most at-risk of falling behind in school without quality preschool or early education opportunities.

But that doesn’t just include keeping up with academics such as learning numbers, shapes and colors. They also need to learn social and emotional skills such as how to manage their emotions and express what they want, think or feel with words. The program’s goals also include teaching children about classroom routines, such as when to raise your hand and how to pay attention when the teacher is speaking.

“Self regulation and social and emotional development are the most important (skills) because those are the foundations for learning,” said Maria Sujo, kindergarten readiness program manager for Oakland Unified School District. Sujo, who has coordinated the program for the last three years, said one of the primary goals of the Summer Pre-K camp is to teach children how to interact with other children and manage their emotions. For instance, how to practice patience by learning to wait in a line.

The program is invaluable because a smooth transition to kindergarten has clear advantages that are often long-lasting, Sujo said. “They get to practice being in school, they get to see the school landscape, they get to be with other children and they learn the balance between teacher-selected and self-selected activities, which is so important for elementary school.” In a self-selected activity a child may decide to go to a play station where children are building something or decide to sit with the teacher in another corner of the room for story time instead.

At East Oakland Pride Elementary, the day begins at 8:30 a.m. Parents sign the attendance sheet and Susan Mueller and Donna Blueford, both teachers for more than 20 years, work with students in groups of three or four, reading stories in lively and animated voices and practicing name writing on a dry erase board. On a recent Thursday morning, Miss Blueford, known to students as Miss. B, stood at the door to welcome parent Richard McClendon and his 5-year-old daughter Tamarah.

Tamarah hugs her dad at the door, says ‘good morning’ to Miss B and makes a beeline for the group of colorful backpacks in the corner of the room to place hers on an empty hook. Then she quietly takes a seat on a large mat as the class begins circle time activity, which includes a deep breathing exercise — hands up to breathe in, hands down to breathe out, three times. Then each student has the opportunity to share a story or to share how they feel that day. Tamarah raises her hand and waits to be called on.

McClendon said he is most proud of Tamarah’s attitude and the respect she shows her teachers. “She wants them to be proud of her and she wants them to be happy,” he said. “She’s a loving person and so in them showing love to her, she’s responding to that. I think they’ve created a nice and safe environment.”

McClendon said his daughter had some preschool experience from Merritt College’s Children’s Center, a child care facility for full-time students of the community college. However, that was only during his final semester in school, when Tamarah was old enough to be preschool-eligible. Once he graduated from the community college, she could no longer attend, he said. Tamarah knew some shapes and colors but the bridge program is helping her to understand classroom curriculum without putting too much pressure on her, McClendon said. “They push her enough to where she is like ‘ok I want to learn.’ She comes home and loves to say what she did at school.”

At 9:30 a.m. all the students line up by singing a song and walking in a straight line to the cafeteria. They pick up a breakfast snack: a muffin, an apple, a carton of milk and applesauce. They eat together and then return to the classroom. Miss B and Miss Mueller create small play stations where students take turns, tracing their first names, cutting colorful pieces of construction paper, building with magnetic tiles and playing with playdough and kinetic sand, which mimics the feel of wet sand. It’s followed by more singing, vocabulary lessons, story time and outdoor play during recess. Finally, children line up for a second trip to the cafeteria for lunch and the day ends soon after that.

Students are assessed at the beginning and end of the program using a district-wide kindergarten observation form, which evaluates social skills such as playing well with others and academic skills such as how many letters, colors or shapes a child can identify. “It’s a four-week program so we don’t see miracles but we do see increases in letter and number recognition,” Sujo said.

McClendon, father of 5-year-old Tamarah, said he’s noticed a big change. “Tamarah is now writing her name, one letter next to another letter,” he said.  “At first, it was kind of like up down, T over here and an M over here and now she has the T next to the H all the way straight across.”

His favorite aspect of the program is that it’s all done through play, he said. Mueller, who is teaching summer bridge for the second time, said each activity has a purpose but it’s meant to be fun. The coloring exercises teach students how to use a crayon with “proper grip.” Even the often repeated phrase “use your words,” is intentional. Mueller said a major hurdle for many kids is getting beyond, grunting, pouting and stomping their feet to being able to express what they want or need in clear sentences.

Learning independence is an often-overlooked benefit of summer bridge programs but it plays a key role in preparing a child for kindergarten, Sujo said. Parents are welcome to stay in the classroom and learn to “practice separating,” which Sujo defines as learning to support your child in being independent and keeping the first-day-of-school tears at bay. “For a lot of parents it’s not just their children’s first time in school, it is their first time taking them to school, picking them up and leaving them in the care of another person,” Sujo said.

Ariel Kelly, mother of 5-year-old AoLani, said her daughter has always been very social so the program enhanced that by giving her more opportunities to regularly interact with children her age. But the main reason she chose the bridge program was to familiarize AoLani with East Oakland Pride and the routine of going to school, while she leaves to go to work. “I wanted her to get familiar with school so it wouldn’t all be new to her.” AoLani will be attending East Oakland Pride Elementary in the fall.