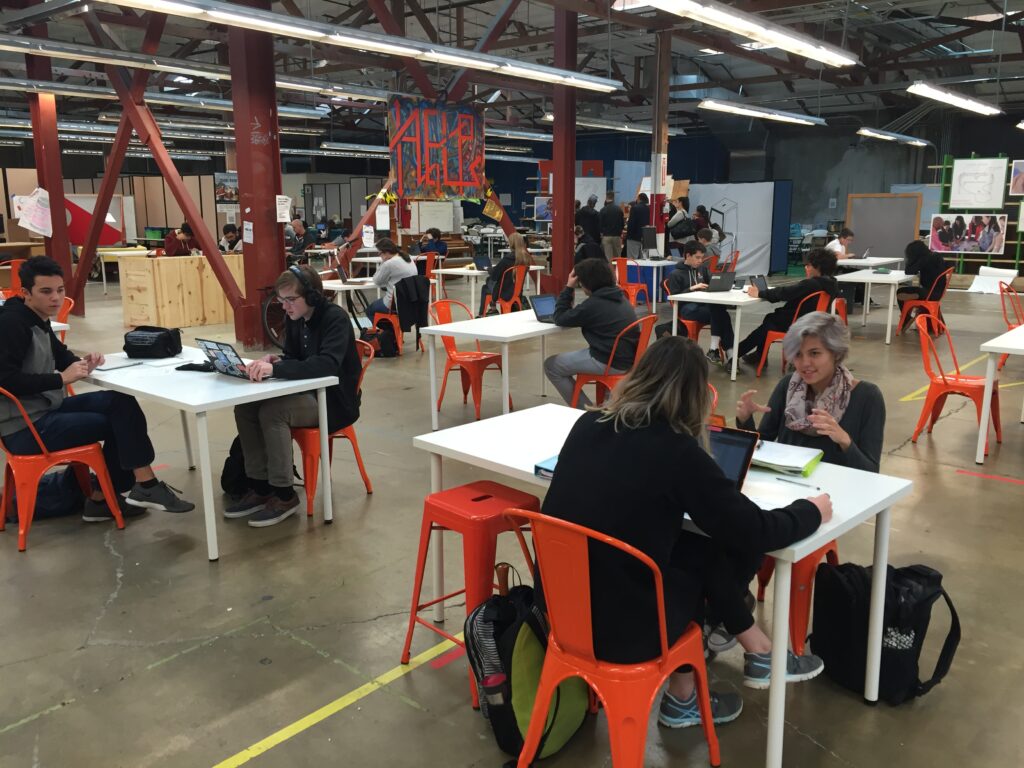 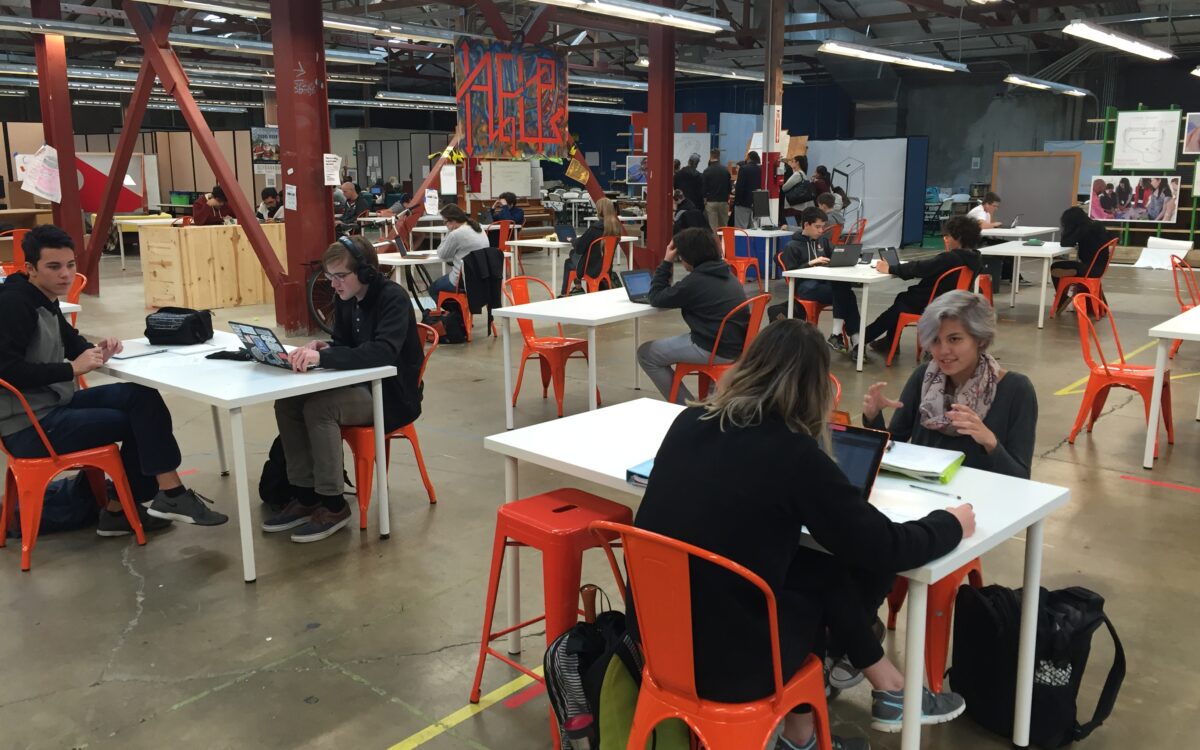 One area that has remained relatively untouched by Silicon Valley’s famed “disruptive” ethos is the design of public school classrooms, which for the most part have remained essentially unchanged since the one-room schoolhouse.

Especially at the high school level, classrooms still sport rows of desks, filled by students who are taught by a teacher in the front of the room.

With rare exceptions, that’s the case even in schools in Silicon Valley, which has revolutionized thinking about office design and has moved toward a range of configurations, including open designs that are supposed to encourage collaboration and creative thought.

Today’s students in robotics and engineering classes might find themselves working in spaces designed for different purposes – sometimes with kitchens that were built for home economics classes.

But efforts are underway in Silicon Valley to transform classroom environments, with an eye to getting students to work together and stimulate ideas that the traditional classroom doesn’t naturally promote.

Efforts along these lines may get a boost as a result of the passage of  Proposition 51, the $9 billion statewide school construction and renovation bond initiative approved by voters in November, which has the potential to stimulate classroom redesign in some districts during the next decade.

Superintendent Robert Bravo, in his first year as schools chief in the San Jose district, said he was struck when he first came to the district about how little of the Silicon Valley design culture has filtered into these schools.

Bravo was prompted to think more deeply about it when a student asked him, “How come we can’t have furniture like Google does?” The student was referring to the Google campus about 15 miles away.

Now Bravo hopes to convince the district’s school board to make room in the budget for classroom spaces that look and function more like work spaces in tech companies that abound in the vicinity of the district.

The Media Arts Center at Palo Alto High School is one example of a building that breaks radically from traditional classroom designs. The two-story building opened in 2014 at a cost of $10 million.

Under the guidance of journalism adviser Paul Kandell and other teachers, student journalists on a recent morning were working on a half-dozen publications – including the digital-only version of the The Paly Voice, the school’s online news source that is updated regularly throughout the day.

The student journalists also publish Verde Magazine, an arts and culture magazine that provided in-depth coverage of the immediate aftermath of the presidential election on Nov. 8. In recent weeks, both publications have been replete with articles on the impact of the election of President Donald Trump – including a feature story on students who voted for Trump. Each day, students broadcast campus news from a studio on site. The center also teaches photography, video production and graphic design.

Classes are informal, Kandell said. “There are no assigned seats, and students are encouraged to sit where they want.”

In the center of the two-story complex is a towering atrium, which filters sunlight through windows as students work on projects while glancing often at two banks of TV screens hanging above them that broadcast school news and information.

Several students relaxed on lime-green sofas inside the center, while on an outside wall a digital ticker tape flashed a steady stream of campus information. “Students want to be in this building,” Kandell said, “and we want to give them as much freedom as possible.”

One of the rooms in the Media Arts Center has a kitchen that becomes a dining room for students to share meals during production weeks, which occur about once every three weeks.

“The kitchen allows us to get to know each other on a more personal level,” said Danielle Macuil, editor-in-chief of Verde Magazine. The media center, she said, “is a place of innovation and inspiration,” where students regularly congregate in the atrium. “We often go out there and have a class where students are sitting on cubes or bean bags,” Macuil said.

But how much do large, flexible spaces promote student collaboration and creativity?

The answer is that they matter a lot, said Eric Newton, innovation chief at the Walter Cronkite School of Journalism and Mass Communication at Arizona State University in Phoenix. The school resides in a six-story building with a central gathering space and other spaces similar to the Palo Alto High media center. After a visit to the Arizona State site in 2009, Palo Alto High students, teachers and community members were so inspired by the building that they suggested that some of its features be incorporated into the design of the Media Arts Center in Palo Alto.

“The physical design of the space absolutely helps,” Newton said, especially when it comes to promoting collaboration. “It shouldn’t matter whether it’s for high school or college students,” he said. “We have to prepare students for a future that they can’t imagine, and how to succeed in the 21st century, using adaptability, creativity and empathy, along with ethics and problem-solving.”

“You can’t do it in a regimented environment,” Newton said, and “the best ideas come in collaborative environments.”

A few miles from Palo Alto, a giant warehouse has been subdivided by portable partitions. Inside, groups of high school students work on projects in an unusual setting. There are no interior walls and lots of space.

Design Tech High School, a charter school that was authorized by the San Mateo Union High School District and opened in 2014, looks like it was designed by high school students – and that is because in a sense it was. From the outset, students built much of the furniture for the sprawling space, said enrollment coordinator Julie Abraham.

Then the students began to think like designers, working on projects that aim to make life better for groups of people by finding solutions to their common problems. One of the first student projects was building a wooden stand where students using skateboards could safely store them in the classroom.

A more ambitious design project involved a group of 9th-grade girls with no experience in coding who led a design challenge with women software engineers at nearby tech giant Oracle. The project aimed to create and code a wearable item that would fill a human need. One group of girls designed a bra for athletes with a heart monitor embedded inside.

This fall, Design Tech High – or d.Tech as it is referred to by its students – will move from the warehouse to a 64,000 square-foot, state-of-the-art school that is being built on the Oracle campus, with funding from the Oracle Education Foundation.

The new high school will be the first public school in the United States to be built on a tech company campus. The school will incorporate sweeping views of San Francisco Bay and a two-story space where students can work on design projects, sometimes getting help from Oracle employees.

Designed by DES Architects after an intensive planning process that involved parents and students, the new space will feature mobile furniture, display spaces, and writable surfaces to provide what architects call “a customizable canvas” for students. The central, two-story lobby will also be used as multipurpose space, alongside break-out nooks and collaboration spaces adjoining classrooms, to further “encourage students to take a hands-on approach.”

But these radical departures from the traditional classroom so far encompass unique partnerships – between d.Tech design charter school and a leading tech company – and an award-winning media program in a high-performing high school.  The extent to which these ideas will find their way into traditional classrooms and schools, even in Silicon Valley, remains to be seen.

Redesigning classroom spaces that are “student-centered, not teacher-centered,” doesn’t necessarily require a new school, but can be done on a small scale, classroom by classroom, argued Kayla Delzer, a 2nd-grade teacher who wrote a recent article in Edutopia.

Meanwhile, in the Campbell Union district, Superintendent Bravo is working with the district’s school board on ideas for classrooms that will inspire learning – an effort that will include help from students, teachers, parents and architects.

That doesn’t mean constructing entirely new buildings, but thinking creatively about how to create learning spaces within the realm of what is possible within his school district’s budget.

“What’s most important is what gets done in those spaces,” Bravo said.