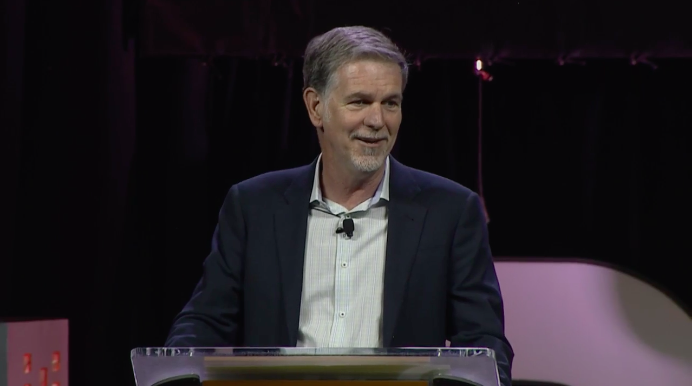 It is an argument that the billionaire philanthropist has been making in various forums for years. His latest salvo against school boards that many regard as a bedrock of American democracy came last week in a speech he made to the annual conference of The National Alliance for Public Charter Schools in Washington D.C., attended by about 4,500 enthusiastic charter school advocates, teachers and administrators.

His appearance came just weeks after all three candidates he backed in Los Angeles Unified won seats in school board races that were the most expensive in U.S. history. Some $17 million was spent in the election – with deep pocketed philanthropists easily outspending the California Teachers Association and other teachers unions in the race.

While Hastings directly donated $1,100 each to candidates Nick Melvoin, Kelly Gonez and Mónica García, he contributed nearly $5 million between September 2016 and May 2017 to the advocacy arm of the California Charter Schools Association. The charter group went on to spend nearly $8 million on behalf of the three candidates through its two main campaign finance arms. Garcia, an incumbent, was re-elected in March while Melvoin and Gonez won their runoff races in May.

As the races came to a head, Hastings contributed $1 million to the charter association just days before the runoff election on May 16. Other contributors included wealthy charter backers like billionaire Eli Broad, Gap co-founder Doris Fisher, and former Los Angeles mayor Richard Riordan.

Hastings, who as a former president of California’s State Board of Education brings an unusually deep knowledge of education policy to his philanthropic giving, says that school boards are the single biggest impediment to educational improvement in the United States. Elected boards, he said, are prone to instability and frequent change, upsetting educational progress in the pursuit of  short-term political agendas. He holds up self-appointed boards like those governing nonprofit charter schools as a far better model. “In a nonprofit, as we get more board members they’re trying to make the organization better,” he said. “They’re not trying to flip-flop it.”

By that he means that an elected official typically is elected on a mandate of change, which often means reversing reforms that are underway, and invariably pushing out the sitting school superintendent.

“What is the fundamental structure of a school district?” he asked. “Well, you’ve got an elected school board that’s elected from the general public and it changes, especially in large urban districts, pretty quickly. And so superintendents change quickly and directions about how we’re teaching change rapidly.”

That creates instability that gets in the way of making steady improvement over time, he argued. “What we see in large urban districts throughout America is a little bit of progress and then a reset, little bit of progress and a reset” Hastings said. “But there is no large urban district that’s continued to get better for 50 years in a row, because of the elected school board … That elected dynamic is what is hurting urban school districts.”

By contrast, he argued, charter schools can continuously improve, because they have a much more stable governance structure. “Governance is the fundamental change with charter public schools,” Hastings said, because charters “are trying to get better every five years – every 10 years you are little better than you were in the past.” That, he said, helps explains the success of some of the best known charter organizations, such as KIPP.  “It doesn’t mean every charter school will be great, or every charter school will have great governance,” he said. “Some, of course, are chaotic, but as long as the good ones grow and the great ones prosper, then the average throughout the movement will be incredible.”

Vernon Billy, CEO of the California School Boards Association took vehement exception to Hastings’ critique. “The idea that we should eliminate locally-elected school boards in favor of a secretive system where appointed boards make decisions with public money and no accountability to the voters is an affront to democracy and common sense,” he said.  “To suggest that school boards are the primary reason for district instability and superintendent turnover when the research on the subject says otherwise is irresponsible at best.”

In addition, Billy said, “there are countless instances where a board has selected a new superintendent and that board and superintendent have maintained stability by pursuing the district’s existing strategic plan.”

If elected school boards are indeed as hopeless as Hasting’s contends, is he wasting his money by investing in getting candidates elected to them?  Netflix turned down an EdSource request to speak to Hastings about his expectations of the candidates he helped get elected to the L.A. Unified board. But presumably he is hoping they will help advance his charter schools agenda.

As he spelled out in his speech last week, he hopes to see the majority of children in the nation’s public schools enrolled in charter schools, something he said he is committed to supporting even if it takes decades to accomplish.

That echoes the views put forward by the framers of the so-called Broad Plan that helped fuel the latest round of charter wars in California. The now moth-balled plan, put together two years ago by the Eli and Edythe Broad Foundation and other charter school advocates in Los Angeles, was to add 260 charter schools in the district, about twice its current number, and to enroll half of the district’s students in them.

Similarly ambitious expansion plans are espoused by the California Charter Schools Association, when it kicked off its “March to One Million” campaign last year. The goal? To enroll 1 million students in charter schools across California by 2022, nearly double the current enrollment of 600,000.

But at least at this stage, it seems as if Hastings will be disappointed if he is expecting the candidates he backed to move aggressively to expand charter schools.

In interviews with EdSource, the two new members who were backed financially by charter school advocates say they will not push for an increased number of charter schools in Los Angeles.

“Charter school expansion is not something that I am really interested in doing,” said Gonez, who is leaving a teaching job at a Los Angeles charter school to join the L.A. Unified school board beginning July 1. “I want to help support and improve all of our currently existing schools with a primary focus on traditional district schools. With the district’s budget deficit, what we really need to be prioritizing is increasing enrollment in our district schools.”

The way to fix the district is not to push more students into charter schools, she said, “but to invest in and support traditional district schools, so that every neighborhood school is an excellent public school.”

Similarly, Melvoin, who defeated incumbent board president Steve Zimmer, disavowed any effort to expand charter schools, and certainly nothing along the lines of the Broad Plan. “We were very clear with our messaging from the start (of the campaign) that this wasn’t about the proliferation of charters,” he said. “It was not about an artificial number of new charters.”

Instead, Melvoin said he wants the district to look at innovative charter schools and help replicate what they are doing in traditional district schools, rather than creating new ones. “To me the victory over the next few years will not be charter growth, but across-the-board improvement.”

Clearly, charter advocates would prefer to have board members like Melvoin and Gonez, who are receptive toward charter schools, rather than ones who are actively hostile to them. However, board members like Zimmer, who is on the board until the end of June, could hardly be described as “anti-charter.” The board approved almost all of the charter authorization applications recommended by the district’s Charter Schools Division from 2011 to 2016.

While having Melvoin and Gonez on the board may not yield the massive increase in charter schools that Hastings and some other charter advocates would like, they could move them closer to that goal in small increments.

But as Hastings made clear last week, he may well be satisfied with slow progress, especially given his skepticism that anything good will come out of elected school boards especially in urban districts, and that he is committed to a decades-long drive to expand charter school enrollments.

“I’ve been a supporter for more than 20 years, and I will be with you for another 20 and another 20, because it’s going to take a long time,” he told charter advocates. “It’s frustrating but it’s the reality.”

He likened the push to create more charter schools to some of the biggest struggles of the civil rights movement. He pointed out that it took nearly 200 years to implement the notion of one person, one vote. “We have to recognize that human society changes slowly, but it does change, and together we have the joy, the honor, and the excitement of changing our country for the better,” he said.