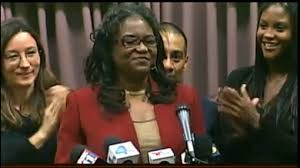 Los Angeles Unified Superintendent Michelle King has temporarily relinquished her duties after undergoing a medical procedure, and Vivian Ekchian, the associate superintendent of support services, will be acting superintendent during her absence, according to district officials.

Ekchian assumed her position as acting superintendent on Monday.

District spokesperson Shannon Haber could not provide additional information on the nature of King’s medical condition, or how long she is expected to be out. Nor could she say whether the district’s elected Board of Education was involved in selecting Ekchian to be acting superintendent.

A report in the Los Angeles Times referred to district insiders who said King injured herself during a family vacation, and had to undergo surgery, but those reports could not be confirmed. She reportedly had been using a cane and a wheelchair at work.

The Times quoted from an email King sent to her staff over the weekend. “Unexpectedly, my doctor informed me that I am not yet released to return to work, due to my continued need to recover from my medical procedure,” King wrote. “The doctor will reassess my progress at the end of this month.” This suggests that King will be out of commission for at least the next three weeks.

King’s health travails came in the wake of recent turmoil on the Board of Education following elections last spring that brought a new board majority supported by charter school advocates. On Sept. 18, Refugio “Ref” Rodriguez stepped down from his position as president of the Los Angeles Unified School Board one week after the Los Angeles District attorney charged him with felony charges for alleged campaign finance violations. Rodriguez, however, remains on the board.

The 56-year-old King is one of a number of newly appointed superintendents in California who were students in the districts that they now head, or spent their entire career in the district or — as is the case with King — were students and teachers and administrators there.

Aside from the recent turmoil on the board, King’s tenure has been marked by a period of relative calm in California’s largest district. She assumed her post following an interim superintendent who replaced then-superintendent John Deasy, who resigned amid a series of controversies and conflicts involving charter schools, a looming budget deficit and a hugely expensive plan to give every student a computer tablet.

In a recent interview with EdSource, King said she has tried to unite all interest groups — unions, parents, charter school advocates and students — by connecting with them and searching for common ground.