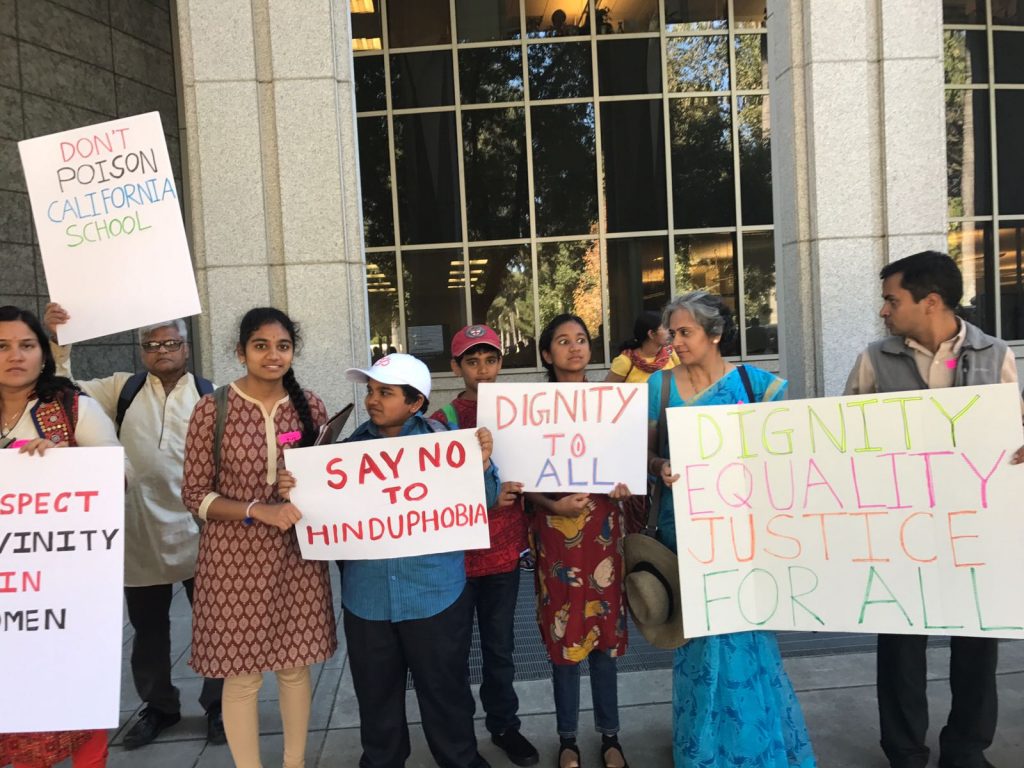 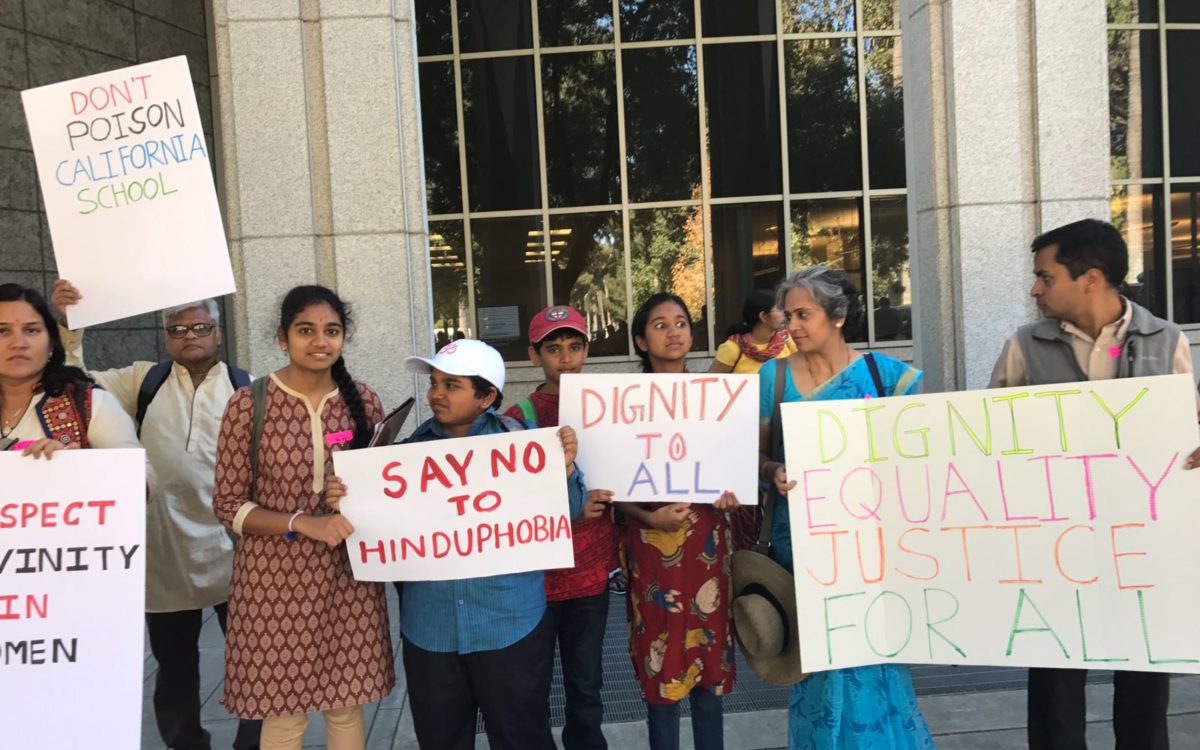 This story was updated at 12:02 p.m. Nov. 8 to include a publisher’s letter to the state board.

As the State Board of Education prepares to adopt recommendations for new history social science textbooks on Thursday, it is being flooded with written comments – including many expressing concerns about negative portrayals of Hindus.

A coalition led by the Hindu American Foundation and other community groups that includes elected officials, nearly 40 academics and about 74 interfaith organizations is urging the board to “only adopt textbooks that are culturally competent, historically accurate and equitable in their representations of Hinduism, Jainism and Indian culture,” said Samir Kalra, foundation senior director.

By Tuesday, more than a dozen people carrying signs that said, “Don’t erase history, don’t erase caste” were assembling outside the California Department of Education building in Sacramento, said Janet Weeks, board spokeswoman.

The board has set aside all day Thursday for comments, board discussion and vote. Weeks said each publisher will be given two minutes to address the board during Thursday’s hearing and that individuals can also sign up for one minute each.

The Hindu activists join other groups expected to turn out in Sacramento on Thursday when the state board, for the first time, will consider recommending history social science textbooks that include “fair, accurate, inclusive and respectful representations” of people with disabilities and people who are lesbian, gay, bisexual or transgender.

The controversy over how Hindus and Indian culture are depicted in textbooks has prompted elected officials from around the state and country to send letters to the board asking it to ensure fair, accurate and culturally sensitive materials are used in K-8 classrooms.

Assemblyman Kevin McCarty, D-Sacramento, said the middle school texts from Houghton Mifflin and National Geographic “perpetuate biased themes about Hinduism and Indian culture by utilizing stereotypical images that portray Indians and Hindus as dirty, primitive and ‘spiritually poor’ and failing to provide accurate descriptions and information on Hindu and Jain philosophical and spiritual concepts, teachings and scriptures.” He did not include McGraw Hill in his criticisms.

Houghton Mifflin Harcourt, in a letter Tuesday, asked for reconsideration given that it has worked with outside groups like the Hindu American Foundation and the Our Family Coalition and that its proposed changes while high volume were mostly routine.

“We deeply regret that the sheer volume of these minor corrections created the impression that we proposed hundreds of content changes across our programs,” wrote Roderick M. Spelman, senior vice president, humanities. “In fact, the majority of the changes were routine in nature.”

The commission said the publisher’s elementary and middle school texts would need so many corrections that they would amount to “rewrites,” which are not allowed in the state’s process.

Representatives from National Geographic and McGraw-Hill did not respond to requests for comment Wednesday morning.

More than 1,000 parents have signed petitions voicing similar concerns from San Ramon Valley, Cupertino and Santa Clara, areas that include large Indian populations.   In addition, the concerns have attracted the attention of press in India.

The textbooks recommendations were made to the board by its Instructional Quality Commission (IQC), an 18-member board that includes 13 members appointed by the state Board of Education and five others appointed by elected officials.

The Hindu activists have expressed opposition to history textbooks submitted by three publishers. The commssion recommended against two K-8 texts by Houghton Mifflin Harcourt in part due to “adverse reflections” of people from different ethnic backgrounds or religions. But it also recommended texts from two other publishers – National Geographic and McGraw Hill –  that some Hindus and advocates have objected to for similar reasons.

“Basically, we all support the IQC’s recommendation to reject the Houghton Mifflin Harcourt K-6 and 6-8 texts because of the number of flaws and inaccuracies that they contain and the stereotypical manner in which they depict Hinduism and India through images and colonialism,” said Kalra.

In addition to state-appointed review panels, members of the public were free to review the texts and submit their comments to the commission and the board. Similarly, a group of LGBT advocates has also been suggesting changes based on its concerns about fair representations of people based on their sexuality and gender. 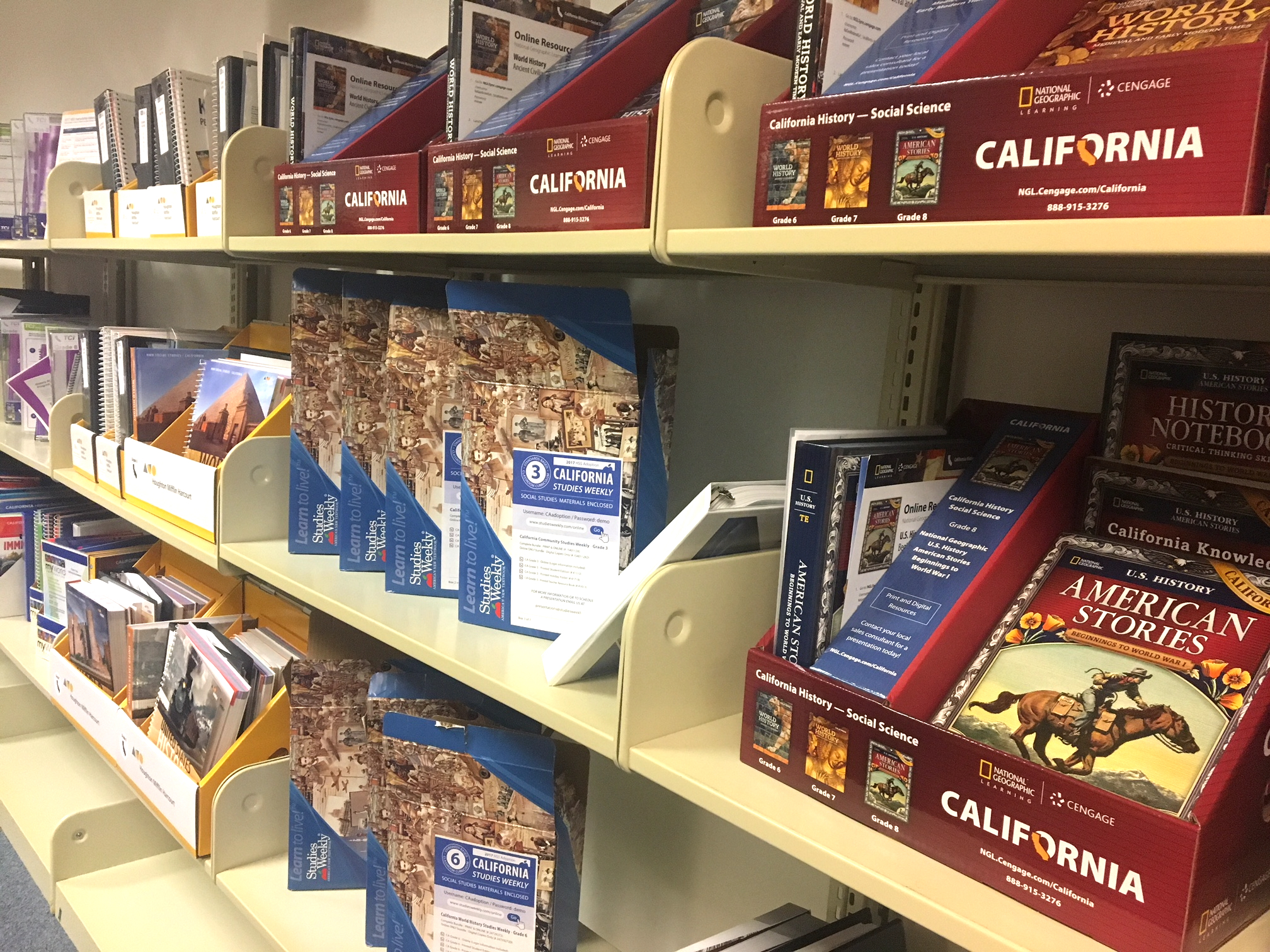 The Hindu advocates are encouraged by the most recent list of edits and corrections submitted by National Geographic and would support the publisher’s textbooks if those are adopted, Kalra said. In addition, he said if McGraw Hill accepts other corrections submitted by a member of his coalition and the state Board requires that they be included, this coalition would support that publisher’s texts  as well.

In response to numerous suggested edits and corrections from advocacy groups, National Geographic submitted 14 pages of edits it “accepted” in its grade 7 and 8 textbooks. These include changing some references regarding Aryans to “the Vedic People,” changing a reference to Brahmanism to “early Hinduisim,” and rewriting references to the caste system from “rigid” to “fluid” and deleting the sentence: “Many Hindus still observe certain cultural practices related to the caste system, such as marrying within one’s own caste.”

Two religions originally referenced as having had their origins in India (Hinduism and Buddhism) were expanded to four: Hinduism, Buddhism, Jainism, and Sikhism.

Lia Nitake, public policy manager for the California Asian Pacific Chamber of Commerce, submitted a letter on behalf of the chamber and the coalition that said the Houghton Mifflin Harcourt, National Georgraphic and McGraw Hill texts “contain rampant inaccuracies and stereotypical portrayals of Hinduism and Indian culture.”

For example, she said Houghton Mifflin Harcourt’s texts “utilize exoticized and stereotypical images of Indian laborers working next to monkeys and cows eating garbage.” She added: “All three publishers use ‘Orientalist’ narratives and colonial-era racial theories to describe the history of ancient India, while leaving out important information on and contributions of Hinduism and Indian culture.”

Nitake said Tuesday that she had not seen the corrections submitted by National Geographic or other publishers.

“If they’re addressing it, then that would probably make a difference, so it’s good to hear that,” she said. “But from what I did see (in the texts), it seemed like a blatant mischaracterization.”

One of the main concerns of the coalition, Kalra said, is bullying. A survey by his organization found that one in three students had experienced bullying because of their beliefs.

“Even more concerning,” he said, “there was a correlation between textbook content and classroom bullying.”

Kalra said advocates including community members, partners, allies, children and parents from as far away as San Diego are expected to turn out on Thursday.

“We look forward to continuing to engage in this process and ensuring our community is able to have their traditions represented in a fair, accurate and equitable manner,” he said.