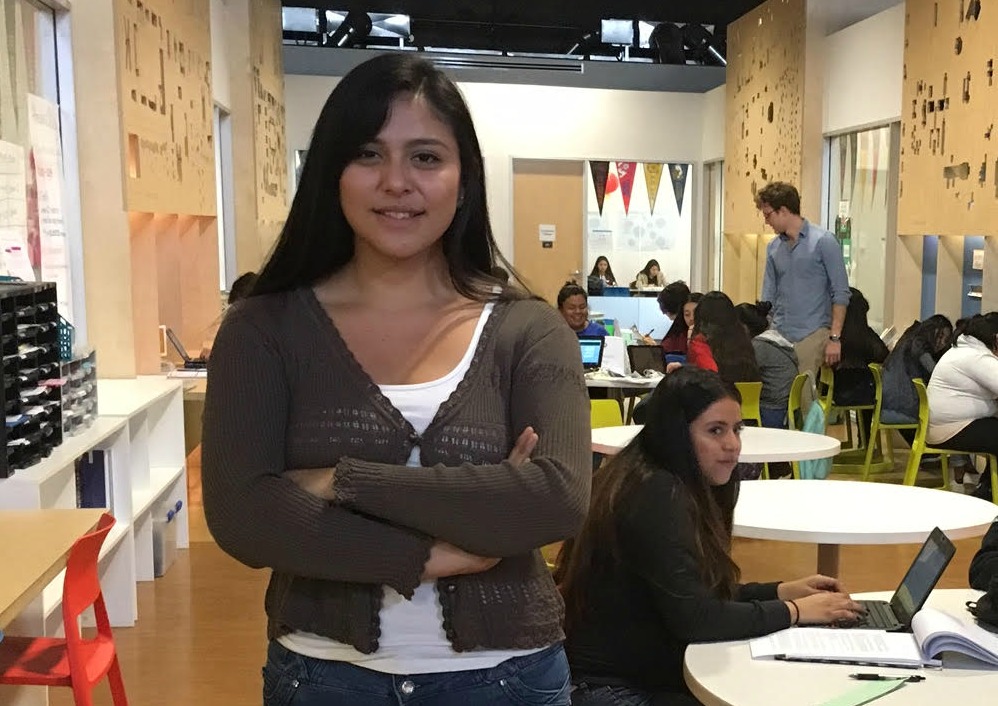 Credit: Courtesy of College Track
Despite uncertainties about new immigration policies, Nivia Aguilar, a high school senior in Los Angeles, recently filled out her application for a California Dream Act scholarship at the office of the College Track organization.

Credit: Courtesy of College Track
Despite uncertainties about new immigration policies, Nivia Aguilar, a high school senior in Los Angeles, recently filled out her application for a California Dream Act scholarship at the office of the College Track organization.

Undocumented students in California are lagging far behind last year’s numbers in applying for state-funded financial aid for college, apparently because of fears that information on the forms could be used to possibly deport the young people and their families, officials say.

The election of Donald J. Trump as president has so rattled some immigrant families that they are skipping, or perhaps just delaying as long as possible, the chance for state-funded California Dream Act grants that pay a large chunk of costs to attend a community college, a California State University, a University of California or an independent college. That is happening even though California leaders have promised that personal data will be protected as much as possible from federal immigration authorities.

Last year, the application schedule for the Dream Act scholarships, like that for federal aid, was open for just two months, from Jan. 1 until March 2. During that time, the program received 33,032 applications, including 13,148 new ones mainly from high school seniors and 19,884 for renewals, according to the California Student Aid Commission, which administers the grants.

This year, the application period was much longer, stretching five months from Oct. 1 until March 2. But as of this week, just 18,714 “Dreamer” grant applications in all have been filed: 8,179 new applications and 10,535 renewals.

Lupita Cortez Alcalá, executive director of the California Student Aid Commission, said the lag in applications is “absolutely” the result of apprehensions regarding the Trump administration’s plans to restrict immigration and possibly remove undocumented people from the country. “I think it has a lot to do with the federal rhetoric around deportation and immigration status,” she said.

With only two weeks or so left before the deadline, counselors, schools and college-readiness agencies across the state say they will work until the last minute to push up those application numbers with public meetings and online outreach.

By emphasizing that California scholarship information is kept confidentially and separately from federal immigration paperwork, they are trying to overcome families’ anxieties about identifying themselves as undocumented and providing required personal details, such as address and assets. The California Student Aid Commission declares on its website that it “has not now, or in the past, shared any information which would indicate a student’s immigration status, either documented or undocumented.”

However, financial aid experts concede it may be very difficult to increase the total number of applications to last year’s level. The number of U.S. citizens and legal residents in California who filed the Free Application for Federal Student Aid (FAFSA ) – the form used to determine most state, federal and private aid – is already at 90 percent of last year’s final numbers. In contrast, the Dream act applications now are just 56 percent of last year’s final tally. Meanwhile, the overall number of high school graduates this year is thought to be slightly higher.

Some students and families appear to be confused between the state-run Dream Act grant application for college aid and the separate federal application for the Deferred Action for Childhood Arrivals, or DACA, according to counselors and others. Under that 2012 executive order issued by President Barack Obama, young people known as Dreamers who were brought to this country as children may be eligible for DACA’s temporary protections from deportation and given work permits. Trump has sent mixed signals on whether he will rescind DACA; many immigrants worry it will be abolished and that the information on DACA applications could be used to identify and locate them for deportation.

“You can lie in wait at home or you can get an education. And we encourage those students to continue their education,” Lupita Cortez Alcalá, California Student Aid executive director, said of Dreamers.

Without any nervousness, Sacramento State student Jose Gonzalez had applied for and received Cal Grant money through the California Dream Act for the past two years. But after the recent presidential election, “there was a little bit of fear when I was filling it out,” said Gonzalez, who is 27 and was brought to the United States from Mexico when he was 5. Referring to Trump’s efforts to restrict immigration, he said, “things are happening lately I never thought would happen. It kind of gives me concerns.”

Nevertheless, he applied for his Dreamer grant renewal and will do so later this spring for his continued DACA status. It is important to him to complete the education he began at a community college and fulfill his plans to go to graduate school and become a social worker.

Gonzalez works on campus as a counselor for a program that helps underrepresented minority and low-income students, and some Dreamers have told him they are so worried about possible deportation that they may leave school. He is trying to persuade them to keep studying and get the grants. Since nothing has changed yet with DACA, he said, “we might as well keep on doing everything” normally.

Nivia Aguilar, 17, a senior at Theodore Roosevelt High School in Los Angeles, is finishing her application for a Dream Act scholarship with the help of counselors at the College Track college-readiness organization. Without the money, she said, it would be nearly impossible to achieve her goal of studying pre-med biology at a school such as UC Davis, her first choice. Her parents – a day laborer and a house cleaner – cannot afford to pay much tuition.

But Aguilar, who emigrated from Guatemala at age 4 and has DACA status, said she has classmates who won’t try for the grants because they are too worried about deportation or are ill-informed. “They are still in the mindset that it’s not possible. They don’t look outside the box,” she said. She has tried to persuade them to apply.

No matter what the Trump administration may do, she said, undocumented students should proceed with their schooling. “In my mind, education is what is going to get you a seat at the table,” she said.

California has one of the nation’s most generous policies for undocumented college students in the nation.

Dreamer students are allowed to pay the same discounted in-state tuition as legal residents and citizens. And for the past six years, those who met income and grade-point eligibility rules have received fees waivers at community colleges. Eligible students have also received Cal grants through the Dream Act of up to $5,472 this year at a CSU, $9,084 at an independent college and $12,240 at a UC campus. In addition, they are eligible for other campus-based aid, loans and other benefits. (In general, family income limits are usually about $50,000 for community college-based grants and up to $95,000 for a family of four for other Cal Grants.)

In contrast, undocumented students are banned from receiving federal grants or loans.

The governor, state legislators, attorney general and California colleges have pledged to protect the personal information of undocumented students. But Alcalá of the Student Aid Commission conceded there is a small risk that federal authorities might obtain the data after a legal struggle. Still, she too is urging students to apply for the Dreamer aid rather than stay in the shadows.

“You can lie in wait at home or you can get an education. And we encourage those students to continue their education. It will only benefit themselves, their community and the economy,” she said.

Katharine Gin, executive director of Educators for Fair Consideration, a San Francisco-based organization that aids undocumented students, said it is not surprising that Dream Act application numbers are lagging. “Given the changes in Washington and immigration restrictions, students are feeling less confident about projecting their futures and investing the time and energy and resources in their education if they are concerned about a repeal of DACA,” she said. Still, her organization and others are pushing for a “strong surge” in applications before March 2.

At the same time, her group and others are urging undocumented students not to leave the country even if they had fully-funded plans to study abroad. Young people who already have DACA status should apply for renewals because that won’t heighten any risk. But, Gin said, in most cases, those without DACA status should not start first-time applications because those students have not yet divulged possibly sensitive information.