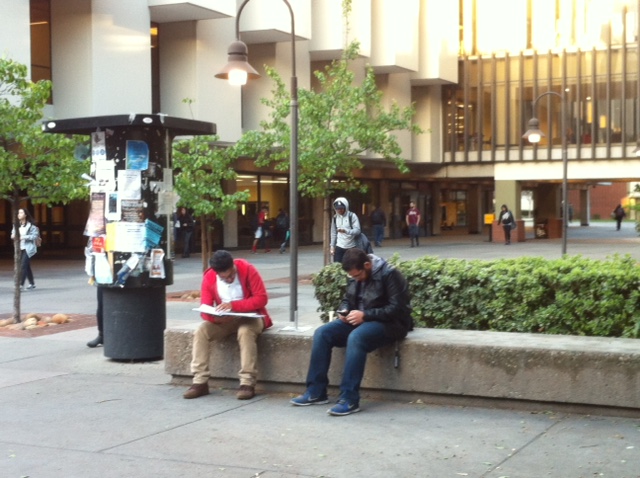 The stakes for the California community colleges — and California — are exceptionally high.

The system serves 60 percent of all undergraduates in California — nearly three times the number enrolled in the University of California and California State University combined. One in 5 of the community college students in the U.S. attend one of the system’s 114 campuses, so what happens there has national implications as well.

In a remarkably frank review, the report pointed out a number of areas where the system falls short.

Only 48 percent of students leave the community colleges with a degree, certificate or transferred to a four-year college after six years, the report states. It says that “even this number is overstated,” as it doesn’t include students who earned less than 6 units or did not even attempt to take a math or English course within three years of entering the system.

“This anemic completion rate is a troubling sign for the overall health of California’s higher education and workforce development system,” the report states.

What’s more, students who do complete an associate’s degree on average take 5.2 years. This, the report bluntly points out, is “considerably longer than the two-year timeframe” the degree was expected to take when it was established, and two years is the length of time many students and their parents still think it should take.

Also problematical is that students often accumulate far more course units than they need to graduate, earn a certificate or to transfer to a four-year college. These “excess units” create inefficiencies and drive up costs both for the student and California taxpayers. Another consequence, the report states, is that they “crowd out or slow down the trajectories of other students who need these same courses for reaching their own educational goals.”

Originally the community colleges were designed to serve young people who had recently graduated from high school. Today, however, 40 percent of students are 25 or older. That means that most of these students are working and can only attend part time. On top of working and school assignments, they also have to do housework, child care and other obligations that most undergraduates aren’t burdened with. As a result, community colleges have no choice but to offer classes and courses that take these students’ schedules into account, along with offering them support services, online courses, and other services to meet their special needs.

On the face of it, California’s community colleges are among the best deals in higher education in the nation. Tuition is exceptionally low — $46 per credit — far lower than in any other state. Low-income students qualify for fee waivers. But very few students receive financial aid to cover living expenses, in part because so many are attending part time. As a result, attending a community college is more expensive than it might appear. In fact, a lower percentage of community college students receive need-based financial aid compared to undergraduates at UC and CSU. In several regions of the state, after subtracting the aid low-income students get from grants, the overall cost of a community college education is actually higher than if they attended a UC or CSU campus.

“Despite some modest gains in student outcomes, the community college system is not performing at the level needed to reliably provide students with opportunities for mobility and to meet California’s future workforce needs.”

The report sets a number of goals for the system, such as increasing by 20 percent the number of community college students who end up with associate degrees, or obtain certification for “specific skill sets that prepare them for an in-demand job.”

Individual colleges are urged to do more to encourage students to attend full time, especially younger students who are not responsible for supporting family members. Students should be encouraged to complete 30 units per year.

However, the community colleges face substantial challenges in realizing the ambitious and worthy goals outlined in the report. The community colleges comprise a decentralized system in which campuses are organized into 72 districts overseen by locally elected boards of trustees. As a result, edicts from Sacramento will not have their desired outcomes unless there is buy-in at a local level.

Tempering any aspirations for a quick fix, the Visions for Success report comes in the wake of an equally ambitious “Student Success Initiative” adopted five years ago. That initiative, the current report says, has “led to slow but steady upticks” on indicators like course completion and making the transition from remedial education to college level work. But the overall performance of the system still “lags far behind what California needs for an educated workforce and future citizenry.”

In return for the $9 billion in general funds alone that the state spends on community colleges each year, Californians have a right to expect much more. The Vision for Success report lays out a grand plan for how to do so. Now the much harder, and unavoidable, task will be to translate that vision into improved outcomes for students enrolled in the largest system of higher education in the world.