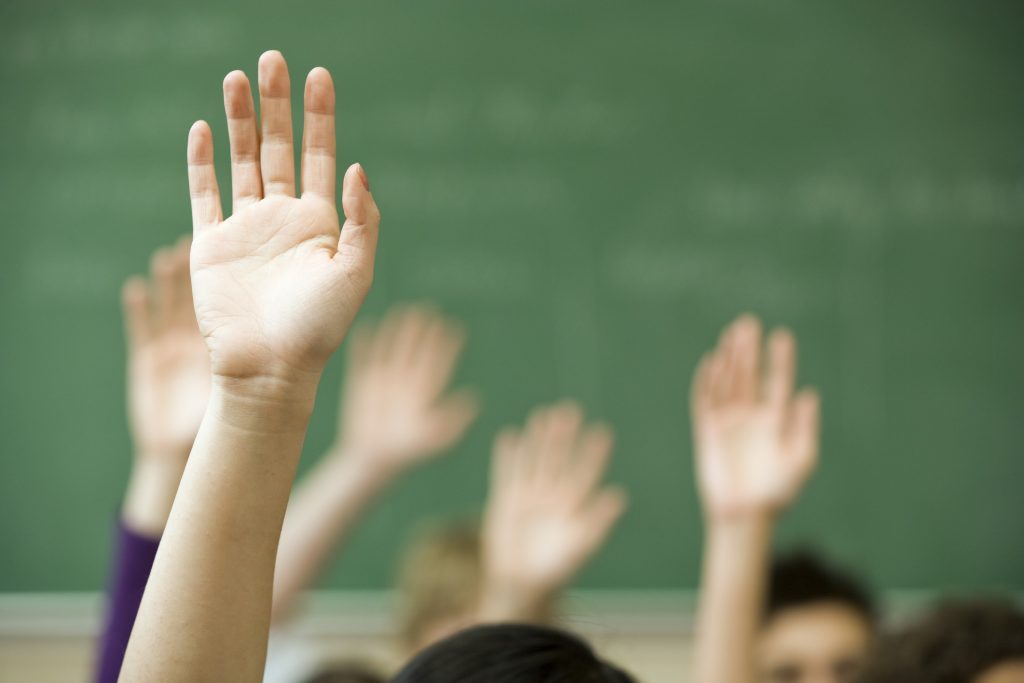 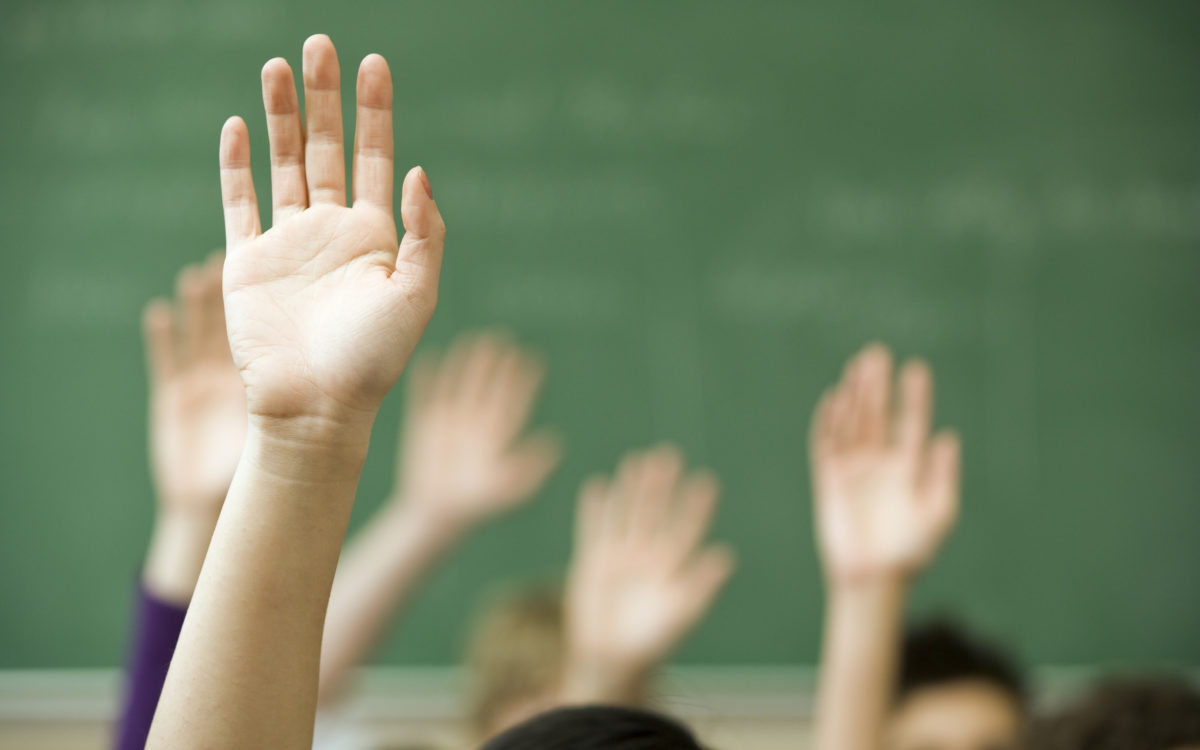 The public’s support for charter schools fell significantly from a year ago nationwide and among both Democrats and Republicans, according to an annual poll by the magazine Education Next.

In higher proportions than the rest of the nation, Californians support the Common Core academic standards and they back pay increases for teachers – unless they are told how much the average teacher earns; then they don’t, an Education Next senior editor reported Thursday.

In a blog post, Paul Peterson updated the magazine’s annual poll with California-specific data. California, with 523 participants, is the only state with a large enough sample out of the total 4,200 adults in the survey, to justify a state breakdown, Peterson said. Peterson is also a senior fellow at Stanford University’s Hoover Institution, which publishes Education Next, and a government and education professor at Harvard University.

On most issues, Californians’ views were pretty close to the rest of the nation. “Californians are not direct descendants of aliens from the other side of Pluto but common, ordinary Americans who think pretty much like everyone else,” he wrote.

On Common Core, though, 51 percent of Californians expressed a positive view, compared with 41 percent nationwide.

That’s not surprising, since California has not experienced the backlash against the math and reading standards that has eroded support elsewhere. State and legislative leaders all have been supportive. So have leaders in the California Teachers Association, in part because the state doesn’t use student scores on Common Core standardized tests to evaluate or pay teachers. That has been a point of contention in New York and other states.

The poll found that 68 percent of Californians said teachers should be paid more, compared with 61 percent nationally. But when half of respondents were told that the average teacher earns $72,800 in California, support for a pay increase was only 27 percent, a difference of 41 percentage points and the largest gap in the nation, Peterson wrote. Respondents thought teachers earned about $45,600, which is closer to the starting pay in many California districts. The pollsters did not provide cost-of-living data, however, or regional differences reflecting high housing expenses in urban and coastal California – a reason many teachers move to other states or quit the profession.

Peterson added a caution: The Education Next sample was drawn to be representative of the nation as a whole, not any state. A California-specific poll would be designed to reflect California’s more diverse population and, reflecting party affiliation, presumably include a higher percentage of Democrats.

In its 11th annual poll, Education Next, a research and opinion magazine published by the conservative-leaning Hoover Institution at Stanford University, surveyed 4,214 adults over 18. That was a large enough sample to explore views on some topics in-depth by asking variations of questions to half of respondents. The latest survey was taken in May and June.

The Trump effect: The poll found that President Donald Trump is having a polarizing impact, with more Republicans agreeing with him and more Democrats disagreeing with him on some key education issues. When half of the respondents were told the president’s positions, between 7 and 14 percent more Democrats disagreed with Trump, depending on the issue, while roughly the same percentage of additional Republicans aligned their views with his. Merit pay for teachers and tax credits for private schools were two of the issues; Trump favors both.

By contrast, in his first year in office, in 2008, President Barack Obama a had persuasive, not divisive, impact, with between 11 and 13 percent of Democrats and Republicans indicating agreement with the president’s views on education issues such as charter schools, after Education Next informed them of his positions. By 2010, after 18 months in office, however, the results became more partisan, after Republicans and Democrats were told of Obama’s views.

Common Core’s bad brand:  The survey also found the public has a more nuanced perspective on the Common Core State Standards, which California and most states adopted in 2010. Perception of the once popular standards has slipped sharply, particularly in Republican-led states, but the “escalating trend of opinion against Common Core may have run its course,” Ed Next’s report on the poll said. Forty-one percent supported the standards, the same as last year. That was down from 65 percent in 2013 in the Ed Next poll. Among Republicans, 32 percent supported the Common Core, with 51 percent opposing, compared with 49 percent of Democrats in favor and 28 percent opposed. But when the name “Common Core” isn’t mentioned, 61 percent said they favored the general concept of “standards that are the same across the states” — a primary goal of creating the Common Core. The difference in support between Republicans and Democrats disappeared when not mentioning Common Core by name; support among Republicans doubled.

The results of independent voters were not broken out. In determining who was a Republican or Democrat, pollsters asked respondents which party they leaned toward. Nearly all chose one party or the other, Education Next said. 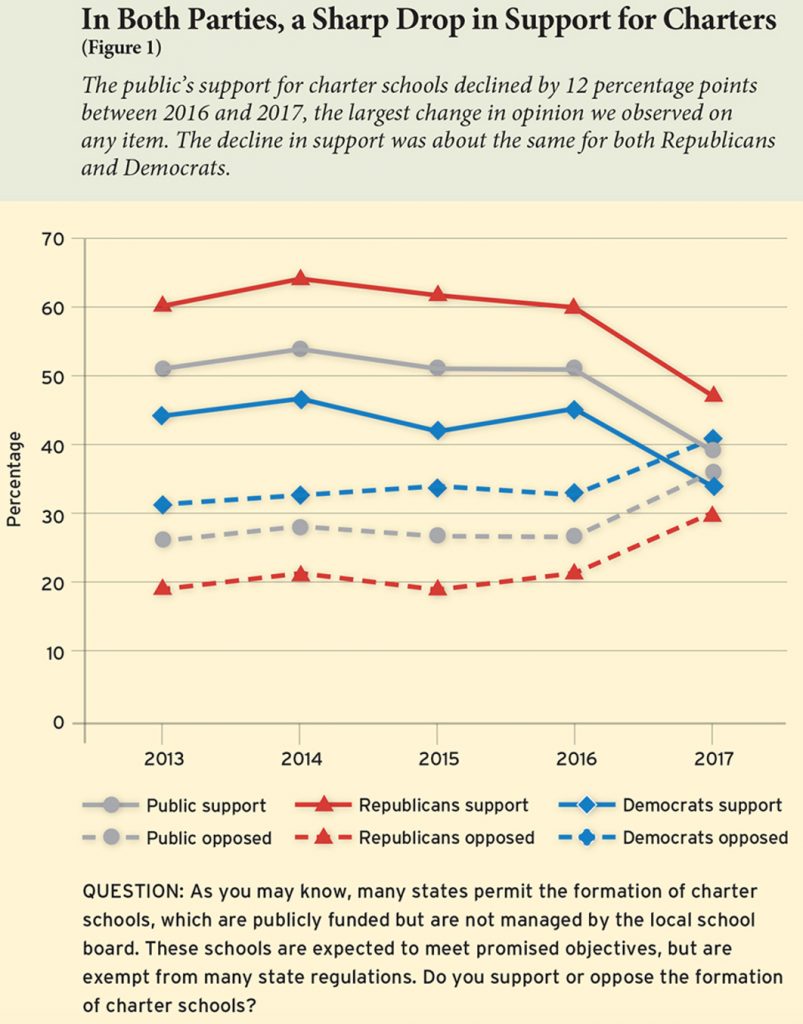 Charter supporters still outnumber opponents, however, 39 percent to 36 percent. And 25 percent expressed no position, which could mean they are ambivalent or neutral toward them, said West, who is also an associate professor at the Harvard Graduate School of Education.

Ed Next’s report noted that within the past year, progressive Democratic Senators Bernie Sanders, D-VT, and Elizabeth Warren, D-MA, have been outspoken opponents of charters. Last fall, the NAACP called for a moratorium on charters and reiterated it again in July after a national “listening tour.” In addition, the Massachusetts Teachers Association led a much-publicized campaign against a proposal to expand the number of charters in the state, and the California Teachers Association created a website, “Kids Not Profits,” radio ads and a social media campaign calling for tighter restrictions on charter schools.

The impact of these and other developments on public opinion “seems to have gone well beyond the confines of the Democratic Party,” Ed Next wrote.

Responding to the poll results, California Teachers Association President Eric Heins wrote in an email, “Educators, parents and civil rights and community groups have been talking about the need for accountability and transparency of privately run charter schools for some time because of the waste, fraud and abuse, so the decline in support this poll shows comes as no surprise. Democrats, Republicans and minorities are all less supportive after experiencing and learning of horrifying stories that have negatively impacted students in our communities. This is why California’s educators are demanding to make charters more accountable, transparent, and accessible to all students through legislation.”

In an email, Jed Wallace, president and CEO of the California Charter Schools Association, said the Ed Next results underestimated the support of charter schools in California.

“Without a doubt, there is a national spotlight on public school choice and we were not surprised to see some changes in support of charter schools nationally as a result reported in the EdNext poll released today.  However, CCSA’s own public opinion polling has found much higher levels of support for charter public schools in California than EdNext’s poll found at the national level,” he wrote.  “Fifty-one percent of respondents to a February 2017 poll indicated support for charters while only twenty-seven percent were unfavorable and twenty-two percent were undecided.  We believe that this is because the California charter sector is more reflective of the values that the public expects of its public schools as a result of charters operating as non-profits and serving all students including English Language Learners and children with special needs.”

The survey did not find an increase in opposition or drop in support for other forms of school choice, however. Opposition to tax-funded scholarships permitting low-income students to attend private schools — an approach favored by U.S. Secretary of Education Betsy DeVos and allowed in 16 states — fell from 29 last year to 24 percent, and 54 percent of respondents said they favored them.

Opposition to universal vouchers, giving all families public dollars for a “wider choice” of attending private schools dropped from 48 to 41 percent, while support increased from 37 percent to 41 percent.

The poll did not break down the results by state or region, although 10 percent of the respondents were from California. Paul Peterson, senior editor of Education Next and a government professor at Harvard, said that the views of Californians were roughly similar to respondents nationwide. But on at least one issue, Californians have made their disagreement clear. Two-thirds of all Ed Next respondents nationwide, and 75 percent of those who had not attended college, favored teaching immigrants and other non-English speakers in English-only classrooms. Last November, 74 percent of California voters passed Proposition 58, repealing English-only instruction and removing restrictions on bilingual education.

On other issues, the survey found:

Opposition to mandatory union fees. As with last year, 44 percent of the public opposed requiring teachers to pay fees to the union to represent them, even if they choose not to join a union, while 37 percent supported the requirement. Even among teachers, more also opposed mandatory fees than supported, 47 percent to 44 percent. That could be an ominous signal to unions, including the California Teachers Association, if, as many observers predict, the Supreme Court overturns a previous ruling upholding mandatory union fees.

Value of a college degree: Two-thirds of the public said they would want their child to pursue a four-year university degree, while only 22 percent would choose a two-year associate’s degree, and 11 percent would choose neither. However, there was a 24 percentage point gap between white adults who have a college degree and those who don’t; 80 percent of whites with a degree said they’d want their child to go to a four-year college, compared with 56 percent who don’t have a degree. The numbers didn’t change significantly when they were told the costs of college and the projected benefits, in terms of higher salaries, from a four-year degree.