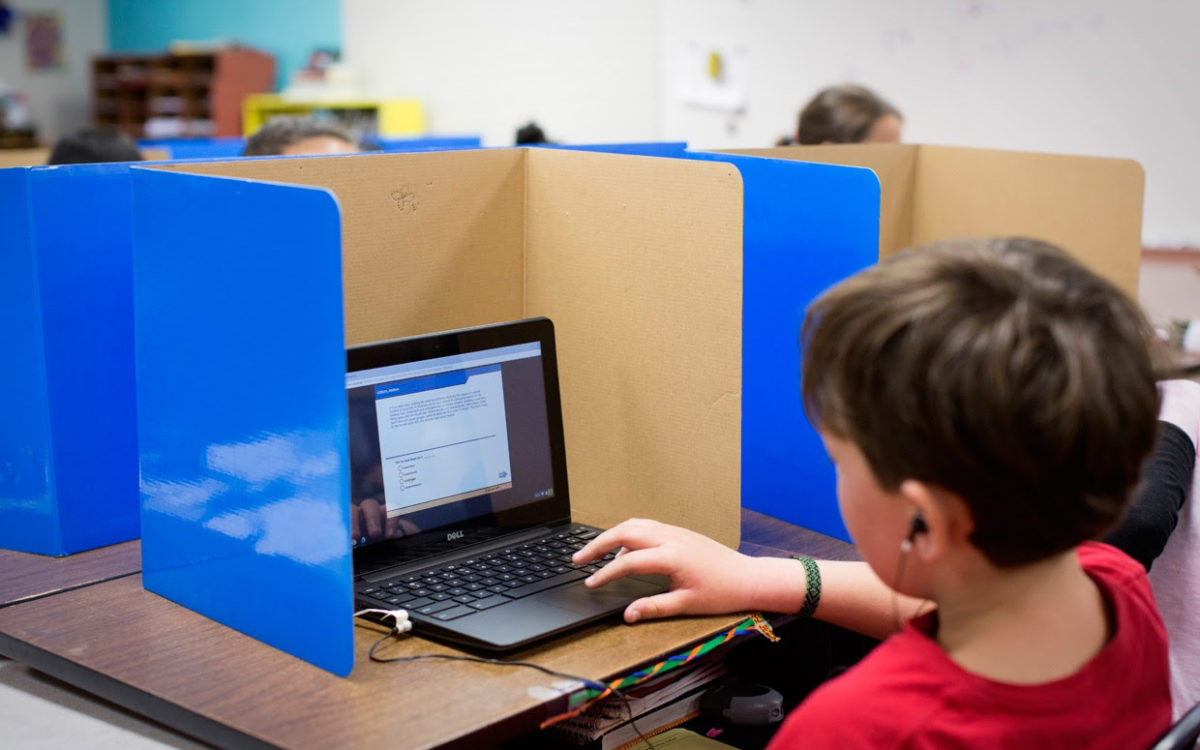 In passing a new school accountability law — the Every Student Succeeds Act — Congress gave states more latitude to decide how to use federal education funding, particularly in improving schools serving low-income students and English learners. What hasn’t changed is the requirement for nearly all students to take annual standardized tests — and for states to see that schools and districts comply.

The minimum participation rate is 95 percent in math and reading tests, as under the No Child Left Behind Act, the previous law. Some states, in their compliance plans for the new law, are proposing to hit violating schools hard to bring them into line. California’s actions would be mild by comparison.

Connecticut is proposing that a school that otherwise would get the highest or second-highest rating on the state’s 100-point index of school performance would be knocked down one ranking, according to an Education Week summary of the 17 states that submitted their draft state plans to the U.S. Department of Education in March.

In Illinois, a school wouldn’t be eligible to receive a top score for academic proficiency if fewer than 95 percent of students took the test. In Louisiana, every student who didn’t take a test would get a score of zero, effectively lowering the overall results for a school or district.

In California, schools not meeting the 95 percent mandate would be singled out in the state’s accountability system. That system, the California School Dashboard, rates schools and districts on several performance measures. The dashboard would include an icon for those schools in which less than 95 percent of students took the test. Depending how far off the mark they are, that may be the only consequence.

At last week’s marathon discussion on the draft state plan, the State Board of Education endorsed the icon idea, which the staff of the California Department of Education recommended.

More details may be coming in the final draft that the state board will take up in September, before submitting the plan to the federal government, deputy state superintendent Keric Ashley wrote in an email. The law also requires identifying student groups, including low-income children, racial and ethnic groups and students with disabilities, that fall below 95 percent.

“The icons might also indicate if they missed the 95 percent by a small margin or a more significant margin,” he wrote. The department “would then respond to districts on a case-by-case basis depending on how much they missed the threshold and the reason why they missed it. Perhaps the department will send a letter, or hold a meeting, or require a plan, etc.,” he wrote.

Whether that level of response will satisfy Secretary of Education Betsy DeVos, who’s charged with enforcing the law, is not yet clear. Several of the 17 states that already have sent in their state plans were clearly noncompliant, but the U.S. Department of Education didn’t call them out in initial feedback, said Phillip Lovell, vice president of the Alliance for Excellent Education, a Washington, D.C.-based nonprofit. Its board members include retired Stanford University education professor Linda Darling-Hammond and Esther Wojcicki, a journalism teacher at Palo Alto High School.

Lovell said Colorado, in its participation calculations, clearly will violate the law by excluding the percentage of students whose parents permitted them to opt out of the tests. Connecticut is saying it won’t break out participation rates of student groups. New Jersey’s plan said the state would await guidance from federal officials — and is still waiting, Lovell said.

Lovell testified Tuesday at a U.S. House committee hearing on implementation of the Every Student Succeeds Act, at which members criticized what they characterized as the department’s inconsistent, overreaching responses to state plans. Lovell agreed the law gives states flexibility in choosing how to improve low-performing schools but not in deciding how to identify the schools. The wording is unambiguous, he said.

The alliance and civil rights groups pressed Congress to keep the participation requirement in rewriting the law in order to ensure the accuracy of data showing disparities in performance of low-income and minority students. The law requires states to act to prevent low-performing schools “from overtly, intentionally or subtly encouraging students not to be present” when tests are given. Pushing out low-performing students “has been an issue in the past,” Lovell said.

But that goal of full participation was undercut by an opt-out movement, particularly active in New York, Washington and Colorado. It was led by parents frustrated by overtesting of their children and teachers opposed to using the results of standardized test scores in teacher evaluations. Last year, when the movement was most active, 21 percent of New York’s grade 3-8 students didn’t take the state’s tests; the state has since backed off on test-based teacher evaluations.

In 2015, the U.S. Department of Education sent warnings to a dozen states where districts’, schools’ or the states’ participation rates fell below 95 percent. California received a letter warning that a “condition” would be placed on its Title I funding for low-income students based on preliminary information showing the statewide participation was below 95 percent, Ashley said, but final data put the state’s rate at 97 percent. The state sent letters to the 21 districts that fell below 95 percent advising them to take steps to improve.

California law permits parents to opt out of state tests, but the statewide rate has been under 1 percent — with a few notable exceptions, including four high schools in the wealthy communities of Palo Alto, Palos Verdes and Calabasas, where students and parents have complained that the Smarter Balanced tests diverted time from studying for Advanced Placement exams. Two years ago, fewer than half of  juniors in Palo Alto’s two high schools took the math and reading tests; that lowered participation of students in all grades in the district to 88 percent. Smarter Balanced tests are given to students in grades 3 to 8 and 11.

Consistent with its state accountability system, the State Board of Education is proposing to downplay the Smarter Balanced test scores in 11th grade in its Every Student Succeeds Act plan. The scores would be one of many elements in a new college and career readiness indicator and not a factor in the academic achievement indicator used to designate lowest-performing schools. California civil rights and advocacy groups have criticized that decision. The proposal may draw the attention of federal officials.

Lovell said he hopes the U.S. Education Department will take seriously its statutory obligation to enforce the 95 percent requirement. “There are more than a few requirements in ESSA. Congress did not write 1,000 pages to say nothing.”