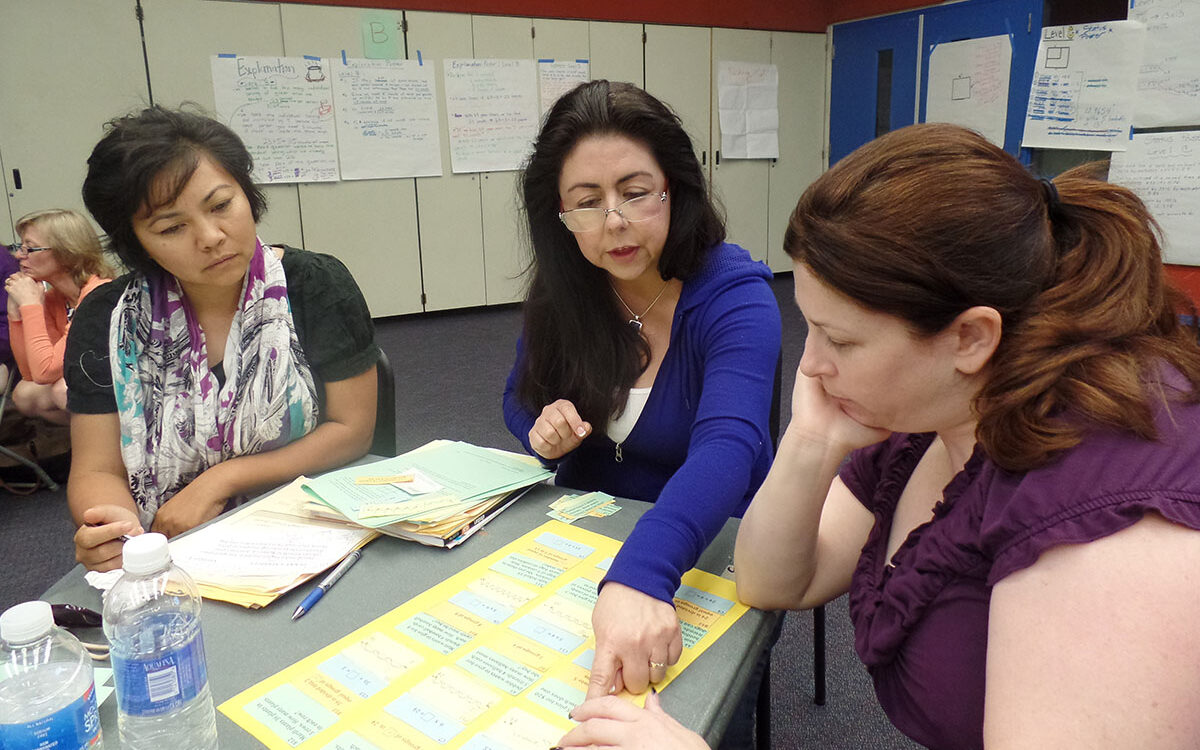 California teachers, more than peers in other states,  feel empowered to voice their opinions and say they have influence over decisions and policies in their schools. In increasing numbers, they say they are satisfied with the instructional materials they are using and the school based, peer-led training they are receiving.

The latest survey results coincide with data collected from 16 states for the Santa Cruz-based New Teacher Center that found appreciably higher test results in schools where their teachers have a leadership role in decision-making. Lead author Richard Ingersoll, a professor of education and sociology at the University of Pennsylvania Graduate School of Education, called it the first large-scale study that found a correlation between teacher leadership and student achievement. The findings validate  teacher empowerment that authorities like Stanford University emeritus education professor Linda Darling-Hammond have long advocated.

The difference in every area was 5 to 8 percentage points higher than combined responses from the other states ­— beyond the 4.5 percent the margin of error.

The latest survey results are “really bright signs of positive conditions on the ground” that, if accelerated, should lead to improved student achievement, said Robert Sheffield, director of the California Initiatives at the Center for the Future of Teaching & Learning at WestEd, a San Francisco-based education research and training nonprofit.

The RAND survey is included in a WestEd summary that Sheffield and his WestEd colleague Reino Makkonen will present to the State Board of Education next week on the progress districts and particularly teachers have had in implementing the Common Core-based academic standards the state has adopted over the past half-dozen years.

The upswing in California teachers’ perceptions partly reflects a shift in professional development to the form that teachers prefer: school-based, teacher-led collaboration. District administrators and principals have come to recognize that centralized, off-site, top-down training is less effective, Makkonen said. The Local Control Funding Formula is pushing professional development in that direction anyway. There is no longer state-directed and state-funded teacher training; each district decides how much and how to spend money on training.

In the RAND survey, California teachers said they had the most influence determining books and other instructional materials used in classrooms, setting standards for student behavior and determining how to measure students’ progress.

About two-thirds of California teachers agreed that their school “cultivates a cadre of teacher leaders” — those who influence instructional practice — and that those teacher leaders provided effective support. And 54 percent of California teachers reported they observed another teacher’s classroom in 2016-17 to get ideas or give feedback, up from 45 percent the year before.

Eric Heins, president of the California Teachers Association, attributed the creation of CTA’s Instructional Leadership Corps as one factor behind the encouraging data. The corps consists of 300 leading teachers, identified for their teaching skills and subject knowledge, who are selected to lead districts’ trainings in the new standards. He praised labor-management collaborations in districts like San Juan Unified, San Jose Unified and a network of small districts. The efforts are “uneven” among the state’s 1,100 districts but “are in the right direction,” he said.

Heins said he is not surprised by California teachers’ higher perceptions given that California avoided fights, as occurred in New York, over tying teacher evaluations to standardized tests.  New York was also surveyed by RAND.

Three-quarters of California teachers in the latest RAND survey agreed that the curriculum, instruction, and materials were well-coordinated across the different grade levels at their school and were consistent among teachers in their grade. That compared with only 49 percent who a year earlier said had access to sufficient resources to successfully implement state standards.

Yet at the same time, asked what they most need to effectively implement the standards, teachers ranked higher quality texts and instructional materials at the top (64 percent), followed by digital tools (online textbooks, webinars and online communities (52 percent). Asked the same question in a parallel RAND survey, principals ranked time to observe teachers teaching at the top (61 percent) followed by more opportunities for teacher collaboration (46 percent). Three out of five teachers told RAND they had sufficient opportunities for collaboration.

Makkonen said that many districts in California have adopted textbooks and materials over the past two years, but teachers continue to look on the Internet for supplementary materials to differentiate how to teach students with varying skills and knowledge. “That search is still happening.”

While praising a decentralized approach to training, he and Sheffield said there remains a need for “quality control” at the school level. County offices should develop tools for districts to evaluate lesson materials and identify what best practices look like, and districts, in turn, should pass these down to schools.