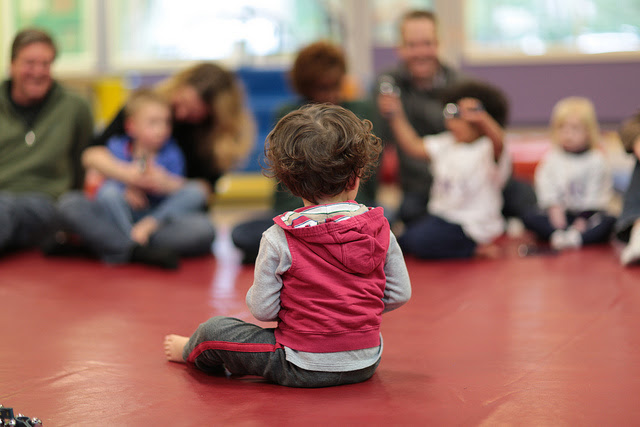 For the first time, more than 100 California-based agencies and advocacy groups that have teamed up to raise awareness about the impact of early childhood trauma on families and communities took that effort to state policymakers, urging them to create legislation that can reduce childhood trauma, often associated with long-term illness and academic and behavior problems in school.

Early childhood trauma occurs when a child, from birth to age 6, experiences or witnesses a painful and harmful incident, which can include abuse and neglect, domestic violence and loss of, or separation from, a parent. It may also result from high levels of stress associated with living in poverty, according to a recent report titled, “Helping Young Children Who Have Experienced Trauma: Policies and Strategies for Early Care and Education.”

Nationwide, almost 35 million children have been exposed to one or more types of trauma, the report states. Young children, including infants, toddlers and preschoolers, are particularly at risk, the report states, pointing to research that finds 60 percent of children who are exposed to domestic violence are in that youngest age group. Those children are also more likely to be victims of abuse and neglect.

The statewide advocacy organization, called 4CA, or the California Campaign to Combat Childhood Adversity, is made up of professionals in health care, juvenile justice, mental health and education. During the summer, the group met with staff members of 85 state legislators and issued a list of five policy recommendations aimed at preventing early childhood trauma and helping young children who have experienced trauma.

The group’s goal was to urge lawmakers to focus on addressing trauma in current and future legislation. This includes bills that address structural changes in healthcare while also focusing on areas such as education and “promotes collaboration and shared decision-making” across disciplines. 4CA is supporting three bills in the 17-18 legislative cycle, including one that requires “children are assessed for trauma as part of their routine health screening through Medicaid.”

A key recommendation from 4CA was to increase training opportunities for professionals who work primarily with children, including teachers. Despite how common trauma is and how damaging it can be to young children, few early childhood educators and programs are prepared to address trauma in schools, according to a recent by the National Center for Children in Poverty that examined policies and strategies around early childhood trauma and education. Without awareness and competency training, it’s difficult for teachers learn how to recognize and respond to trauma appropriately, the report states.

4CA’s first recommendation is to develop a “trauma informed workforce,” which means creating opportunities for more professionals to be trained to recognize signs that a child might have experienced trauma, such as difficulty interacting with peers, excessive crying, or disruptive outbursts. It also means finding the best ways to work with those children affected by trauma so the problem doesn’t worsen. The group also recommends that professional licensing and certification standards require professionals to have the skills and the knowledge to help children facing traumatic circumstances.

Chris Padula, interim director of the Center for Youth Wellness, the lead organization in 4CA, said workforce development is key to alleviating the effects of trauma. While trauma in early childhood is a public health issue, it’s also important for teachers to be trained to recognize signs and respond, Padula said. Often people think about trauma, “Oh that’s a mental health thing or that’s something for the doctor but it’s one body, it’s one child and the ability to do this work in the health field and education field is critical to be able to address what is happening with the whole child, their body and their life,” he said.

First 5 Humboldt, a county-based commission that provides programs for children 5 and younger, recently surveyed early childhood teachers and asked, “What’s your greatest concern?” The majority of teachers said, “managing challenging behaviors in our classroom,” said Mary Ann Hansen, director of First 5 Humboldt. “We hear this over and over again that teachers are struggling,” she said. Humboldt County has focused on expanding trauma training opportunities, Hansen said. Since 2011, First 5 Humboldt, which is also a member organization of 4CA, has led 84 trainings with 3,546 participants.

One of the longest running initiatives in Humboldt County is called the 0-8 Mental Health Collaborative. The collaborative is made up of teachers, principals and school administrators as well as mental health professionals, such as social workers and guidance counselors. It provides free and low-cost workshops and training opportunities for parents and professionals who work with children 8 years old and younger. It also raises awareness about how to prevent childhood trauma and the best steps to intervene if a child has already been affected by a traumatic experience. The group works specifically with families at 11 play groups in the county and, if needed, connects families to additional resources, such as housing.

Hansen said the benefit of training teachers is that younger children who may need additional support in the classroom receive it. It also helps to reduce the stress teachers may feel if they don’t have the tools to help those children in their classrooms. Hansen said often teachers cite classroom stress as one of the reasons they leave the field.

“Being able to dial children’s behavior back down to where they learn and can be successful and you can also manage your classroom, can be the difference between a teacher staying and leaving,” Hansen said.

The training is also effective because teachers are not isolated in one workshop but learn skills alongside principals, administrators and other professionals who work with younger children. “We are all facing the same issues,” Hansen said. “We all have to understand and have a common base of language and really the core of that is understanding the deep effect trauma has on children’s outcomes and success.”

Heather Richardson, who is entering her sixth year as a preschool teacher at Winzler Children’s Center in Eureka, Calif., said attending training sessions once a month has given her more confidence in the classroom. She’s been able to create “a calm and relaxing environment for students,” she said.

One of the techniques Richardson has used in her classroom involves breathing exercises commonly used in yoga. During circle time, during which preschoolers sit together in a circle and typically sing songs, listen to a story or do an activity, Richardson said they also practice taking a few deep breaths as a group.

In a situation where a child may start crying excessively, this is a technique that helps, Richardson said. She also repeats phrases she learned during training sessions, such as, “I am here to talk to you, when you are ready to talk to me,” she said. “We let them know that we are here and there is no added pressure to participate until they are ready,” she said.