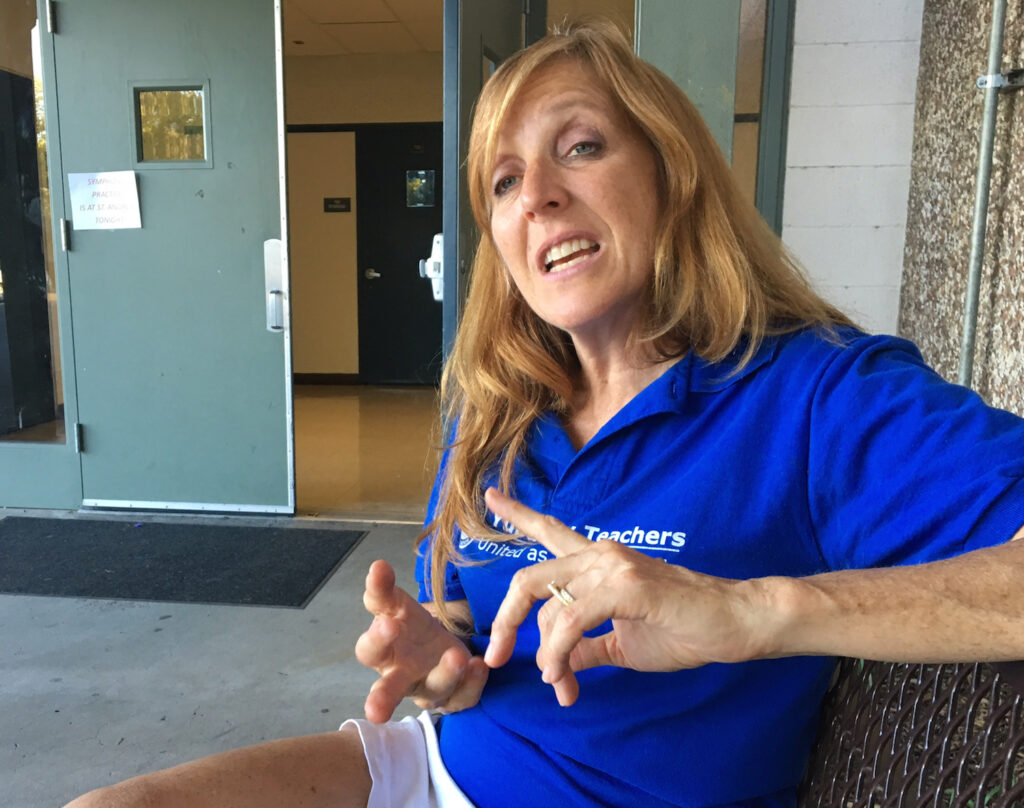 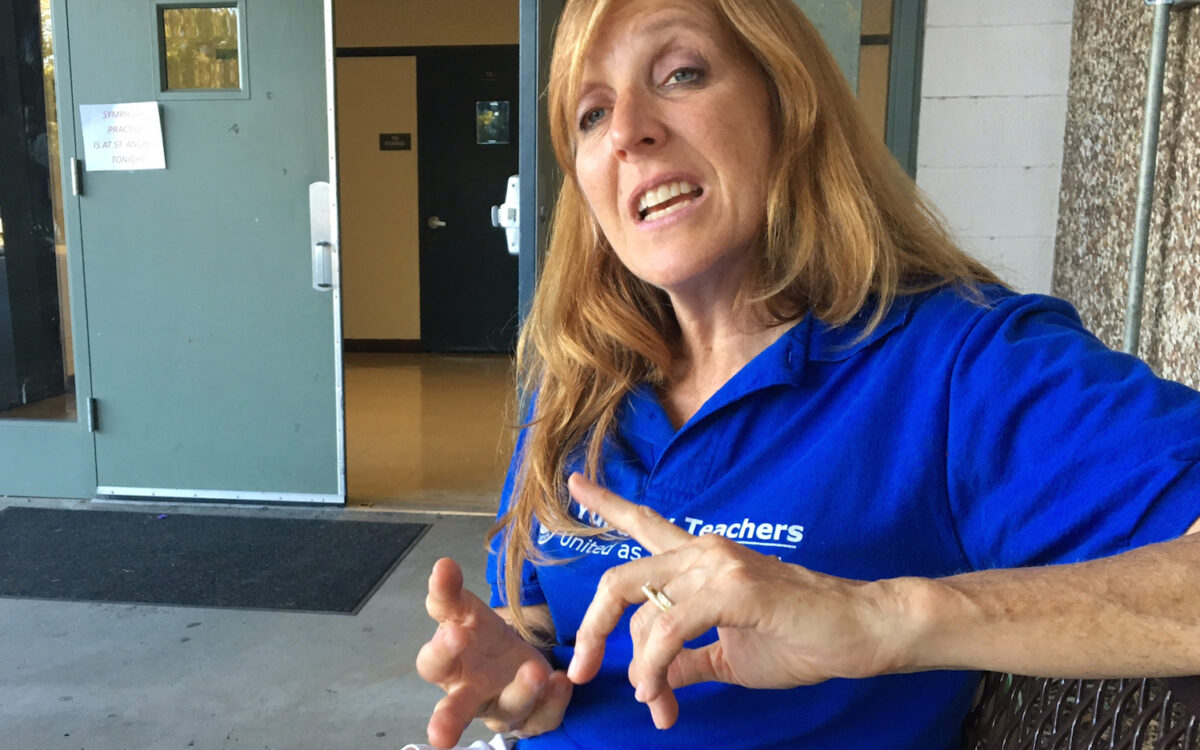 A tense, closely watched seven-day teachers strike at Yuba City Unified that ended this week was, at its core, a dispute over interpreting the Local Control Funding Formula, the state’s 3-year-old school funding law.

Yuba City teachers argued that extra money the formula provides districts for low-income kids, foster youth and English learners should go to fund across-the-board raises to help retain teachers. The school board said not unless these “high-needs students” also got something tangible in return, as the funding law intends.

Yuba City teachers were the first to walk out over the issue, but Stockton Unified, whose teachers authorized a strike without setting a date, could be next. Teachers there say that funding formula dollars should go to an across-the-board raise since nearly all students in the district qualify as high-needs. Negotiations deadlocked over the board’s proposal for a 6.5 percent raise in exchange for more instructional time.

The same fight over what’s permissible under the funding law is playing out less visibly in contract negotiations and settlements throughout the state.

In Yuba City, a district with 13,000 students on Route 99 midway between Chico and Sacramento, the board held firm to its basic position, but also compromised after negotiations that ended at 5 a.m. Monday. Teachers got a 3-year, 11.1 percent raise, less than they wanted but more than the board had initially offered. About half of that increase is coming from funding targeted for high-needs students and will require that teachers do additional work: spend time collaborating with each other within the existing school week and attend three professional development days — two this year and one next year.

Teachers, smarting over a loss of seven days pay from the walkout but anxious to return to the classroom, voted Monday 506-15 to approve the contract. The school board unanimously approved it Wednesday.

“We brought teachers the best deal we could, for now, with the current school board, with the district office and board prepared to keep unqualified subs in the classroom,” sleep-deprived Yuba City Teachers Association President Dina Luetgens said Monday after the vote. A 26-year chemistry teacher at Yuba City High School, she said, “It was important to stand up for the future of our schools so that more great teachers don’t leave the district” for nearby districts for more pay.

Superintendent Nancy Aaberg said that the teachers strike, the first in the region, “was completely not necessary.” But the district is satisfied it was able to give a substantial raise while keeping the focus on the funding law’s intent — improving the education of underperforming students. Aaberg, who had planned to retire in November, said she was hopeful “structured collaboration would help students achieve new heights.” But if it doesn’t, the district, in critical concession, agreed not to rescind the raise. Teachers could propose alternatives, like a longer day.

But the hard feelings that culminated in the strike and the parent activism it precipitated may not abate. A campaign to elect three new members of the board in November and to recall the remaining four will continue, said Denea Rexroad, one of five parents leading the effort. “The district did us a favor by bringing the community together with the teachers,” she said.

As with Yuba City, pay talks in California are likely to become testy in coming years, with the state revenues for schools projected to slow combined with mandated multi-billion-dollar increases in teacher pension costs. A teacher shortage in some subjects and regions in California is adding to wage pressures.

The Local Control Funding Formula and state Superintendent of Public Instruction Tom Torlakson’s interpretation of it have created ambiguity, fueling disagreements as to when across-the-board raises are appropriate.

The California Teachers Association has repeatedly cited Torlakson’s letter, as did Yuba City’s teachers, in calls for across-the-board raises.

The law provides the uniform base funding per student and additional funding for high-needs students. They receive “supplemental” funding for each homeless and foster youth, English learner and low-income child, and, once these students comprise more than 55 percent of total enrollment, the districts receive additional “concentration” dollars. In Yuba City, where 71 percent of students are high-needs, that will bring the district an extra $21 million annually at full funding of the formula, projected to be reached in three or four years.

State board may make it easier to follow the money

The funding formula says that districts must increase or improve programs and services for high-needs students in proportion to the amount of extra funding they receive. Because Stockton and Yuba City have a large concentration of high-needs dollars, they can use the extra money for districtwide purposes, such as across-the-board raises — under some conditions.

That’s where it gets sticky. The funding law created eight priorities that districts must address annually in their Local Control and Accountability Plans. Two of those uses are providing all students with qualified teachers in every subject and raising student achievement.

In a June 2015 letter to county and district superintendents, Torlakson wrote that “a district may be able to document in its LCAP that its salaries result in difficulties in recruiting, hiring or retaining qualified staff, which adversely affects the quality of the district’s education program,” especially for high-needs students “and that the salary increase will address these adverse impacts.” But Torlakson indicated that a district would then have to set measurable goals in an LCAP to justify using supplemental and concentration dollars: A raise would reduce teacher turnover or increase high-needs students’ academic achievement, for example.

Torlakson’s letter superseded an earlier interpretation by the Department of Education that had taken a harder line. It said that there could be across-the-board raises using supplemental and concentration dollars “only in limited circumstances” and districts would face a “heavy burden” to justify it. Advocacy groups for low-income students criticized Torlakson at the time for backing away from that position.

The California Teachers Association has repeatedly cited Torlakson’s letter, as did Yuba City’s teachers, in calls for across-the-board raises. The Yuba City teachers union cited a statewide Ed-Data salary comparison that showed the district’s teachers on average earned 13 percent — $9,494 — less than the statewide average for teacher pay in a unified district. The union attributed many of the resignations or retirement of 70 teachers this year — about 10 percent of the district’s teachers — to the pay disparity.

Board President Lonetta Riley, a member of the board for 18 years, said there’s no extensive evidence of that. The district presented its own salary comparison to a fact-finder that put Yuba City roughly in the middle range of local districts’ pay levels, although starting pay is lower, Deputy Superintendent Robert Shemwell acknowledged.

What’s an effective use?

The school board has used base and supplemental and concentration dollars to hire instructional coaches — an expenditure the union questions ­— place an assistant principal and a counselor in every elementary school, add career technical education programs, and take steps to decrease disparities in college acceptance to University of California and California State University campuses, Aaberg said. To pay teachers for more training and collaboration time is appropriate for targeted dollars, she said.

Decisions underlying the LCAP “represent goals that were parent-designed,” Aaberg said. She acknowledged “better communication should and will be done” to help parents understand tradeoffs when using supplemental and concentration dollars for pay raises.

But teachers were effective in rallying parents, especially those with children in low-income schools, to their side. Some kept children home during the strike in solidarity. They brought food and water to the picket line. Nearly 3,000 parents and teachers attended a tense school board meeting last Thursday.

“Teachers here put in extra time,” said Bruce Nelson, after dropping his four children at Park Avenue Elementary School Tuesday. “I can’t show enough gratitude for the time after school they take with our children.”

Parents understood that the strike wasn’t just about higher pay, said Shayne Edwards, a 2nd-grade teacher at Park Avenue who’s been teaching for 28 years. “It was about becoming competitive so that there are qualified teachers when their kids go to high school years from now.”

Riley said, “Clearly people did not understand how the LCAP works, but when there is a lack of trust, people will hear what they want to hear no matter how many charts and paid ads you present to them.”