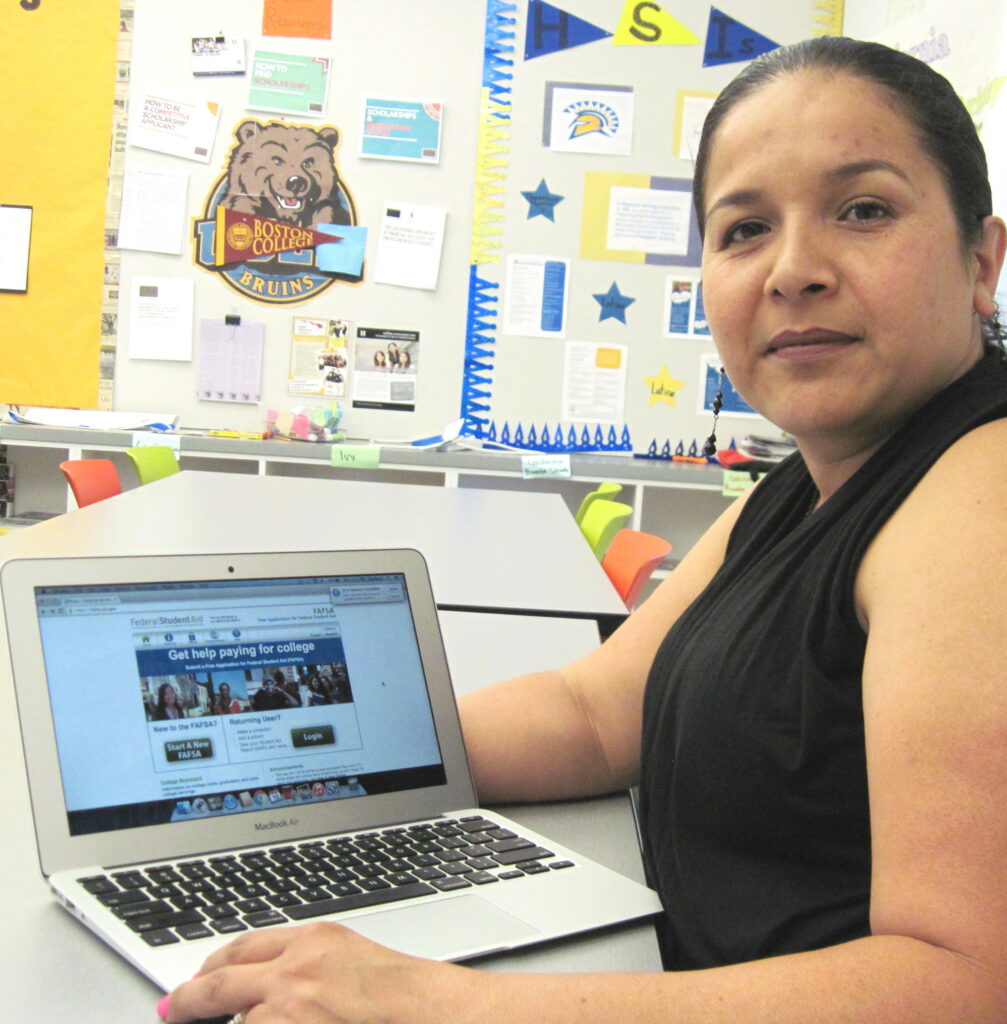 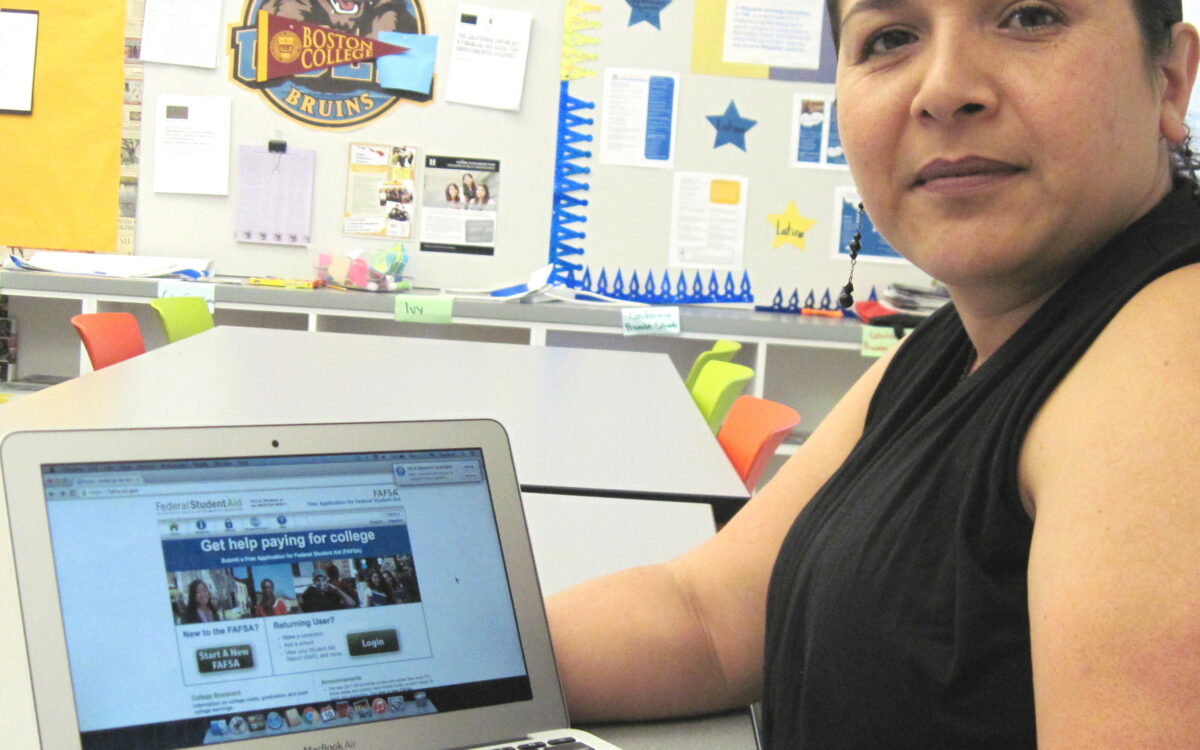 Larry Gordon/EdSource Today
Patricia Trujillo, mother of a high school senior, is starting on the federal application for financial aid at a Los Angeles office of the College Track organization that helps prepare teens for college.

Larry Gordon/EdSource Today
Patricia Trujillo, mother of a high school senior, is starting on the federal application for financial aid at a Los Angeles office of the College Track organization that helps prepare teens for college.

This fall, new federal reforms may ease the anxiety and deadline pressure surrounding what has been a dreaded chore for many families – applying for college financial aid.

Students and families will get three extra months to work on their application for financial aid, thanks to the new rules. In the past, students could not start filing the online Free Application for Federal Student Aid, or FAFSA, until Jan. 1, and most Californians had until March 2 to submit it. Now most California students have from Oct. 1 through March 2 to send it in. The changes also make it easier to include the required income tax records information.

But college officials and financial aid experts are waiting to see how many students take advantage of that extra time, procrastinate or, even worse, still miss the deadline. And much attention will be paid to whether aid is actually awarded earlier than in previous years and whether that affects where students apply to college and eventually enroll.

The application carries much weight since it is used to figure out how much a family is expected to pay for education costs and how much in grants, loans and work-study jobs are available not only from federal sources but from state and campus funds as well. The form is used to apply for everything from federal Pell grants and Cal Grants to alumni-donated scholarships at private schools.

To encourage early filing, college readiness programs and government agencies have been expanding their outreach in recent months. Until people get more familiar with the details, the overlap in timing with deadlines for college admissions applications may mean extra stress for students and for high school counseling offices and organizations that help families fill out the forms.

“It’s a challenge but it’s a challenge we are really excited to undertake because of the access and opportunity we are going to be affording more California students,” said Lupita Cortez Alcalá, executive director of the California Student Aid Commission. That agency paid students, among other aid, 331,000 state-funded Cal Grants last year based on the federal documents.

The state Student Aid Commission has shifted the timing of its training sessions for high school counselors and its nearly 900 Cash for College workshops for parents across the state to months earlier. It revamped its computer system so students could receive notification of Cal Grant awards as early as November. But it has not received any extra funding or staffing, Alcalá said.

“My theory is that giving them information about financial aid packages earlier will motivate them to apply,” said Lupita Cortez Alcalá, executive director of the Student Aid Commission.

In another much-welcomed change to the application, families no longer have to scramble to finish or estimate federal tax filings for the year just ending; instead, the new form seeks tax information for the so-called “prior-prior” year, data that should be more easily available to families. So students enrolling in college in fall 2017 can submit income tax material for 2015, rather than for 2016. A helpful new online link to IRS information automatically transfers most income tax data to the form.

Alcalá estimated that between 1 and 3 percent more California students may meet the March 2 deadline this year because of the extra time and tax data reforms.  In recent years, about 1.4 million Californians filed the forms by March 2 – about a third from high school students and the rest college students seeking renewals.

In the past, many Cal Grant notices arrived in February, too late for the Nov. 30 admissions application deadline for UC and Cal State and the early January deadline for most private colleges. But now, Alcala said, it is possible that students who submit the form in early October could be told in November of eligibility for various amounts of Cal Grants at community colleges, California State University and University of California campuses as well as independent colleges and, encouraged by that, still have time to add admission applications.

“My theory is that giving them information about financial aid packages earlier will motivate them to apply and motivate them to follow the rest of the process,” she said. Cal Grants provide from $1,670 to $12,294 a year to eligible students, depending on their needs and where they attend school.

Students who file early are also likely to receive early estimates from the federal government about some grants and loans, although those are preliminary and do not include the crucial aid that comes directly from the colleges and universities.  Aid from the campuses may be available earlier than in the past but still won’t come before a student is notified about whether he or she has been accepted or rejected by a college.

Christopher W. Carter, the University of California system’s director of student financial support, welcomed the reforms but said UC is not changing its timetables. He said he does not anticipate many more students will apply for UC admission because they receive Cal Grant information early.

“I don’t see any evidence at this point to anticipate some big shift in behavior of students about whether they apply to or attend UC,” Carter said. And given the procrastination that causes many admissions applications to be submitted just before the deadline, he said he is not sure whether many families will finish the aid application in November.

Most independent colleges will not accelerate aid notifications for regular deadline applicants, according to Kristen F. Soares, president of the Association of Independent California Colleges and Universities. “There is a lot of  ‘wait and see’ how the first year (of changes) rolls out,” said Soares, whose organization represents nearly 80 not-for-profit schools. But some may be able to let their “early admission” candidates know about aid sooner than in the past, she said.

Cal State system spokeswoman Toni Molle said admission timetables are unchanged although some CSU campuses may tell students about their aid packages earlier than in previous years. With less of a lag between the initial admission letter and subsequent aid awards, families will have “more time prior to the May 1 ‘commit’ date to decide which school they will attend and fully understand their financial options,” she said.

The October start of filing has raised some concerns about simultaneously tackling the aid and admission applications. However, Los Angeles parent Patricia Trujillo said she and her husband are happy about the timing. With the help of the College Track college readiness program in the Boyle Heights neighborhood, they expect to complete the aid form by the end of October. That way, she said, her daughter Yolanda, a senior at Roosevelt High School, will be able to compare costs of staying close to home for college versus living at a UC or Cal State out of town, and the family will have “a better idea of how much we will have to put in to start the savings for college.”

Financial aid is crucial, she said, since she and her husband – she is a nanny and he is a carpenter –  have two younger children as well. Also, she said she does not want Yolanda to amass too much debt from undergraduate school in case she pursues graduate studies later.

While it might feel rushed, Pallais said the changes are “a good thing in the long run,” especially if students learn about their aid eligibility early. “The more real data we have and the earlier we have it, always helps our students and families to make the best decisions they can,” she said.