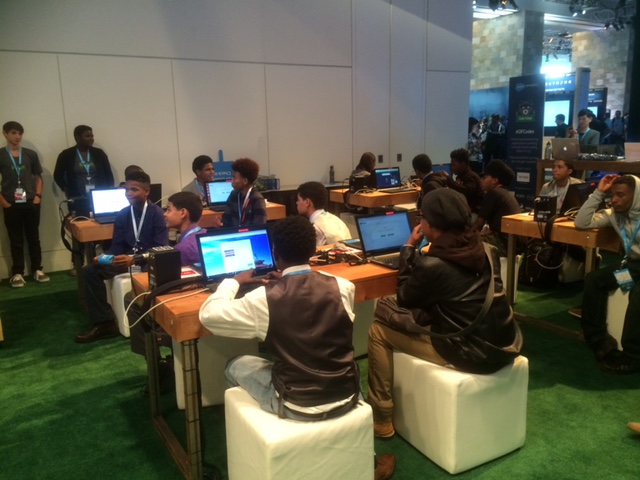 The Oakland Unified School District has scored another big grant from a technology company to help expand its computer science and math curriculum — a move designed to accelerate graduation rates in a district that has seen 40 percent of its students drop out of school in recent years.

Oakland Unified is getting $2.5 million this school year, with expectations for more in the years to come, Wilson said.

Salesforce also said the company is making a $6 million donation to San Francisco schools — the fourth donation in as many years.

“What this means for students, including Blacks and Latinos, is that they get a piece of the American Dream that we often share with them is out there,” Wilson said. “This investment will go a long way to making this a reality.”

Wilson said that he is optimistic that the investment will help improve graduation rates in Oakland Unified, reduce class sizes in the 6th through 8th grades and improve grade point averages.

Previous investments by other high tech partners have helped boost graduation rates, a trend that Wilson said he is hopeful will quicken with the Salesforce grant, the district’s largest ever in a single year.

“What this means for students, including Blacks and Latinos, is that they get a piece of the American Dream that we often share with them is out there,” said Oakland Unified Superintendent Antwan Wilson.

In the 2012-2013 school year, Oakland Unified reported that 62.8 percent of its students entering as freshmen in 2009 had graduated. By 2014-2015, the graduation rate had improved only slightly, to 63.4 percent, according to the latest figures available from the California Department of Education.

Wilson and Ebony Frelix, senior vice president in charge of philanthropy and engagement at Salesforce.org, said the Salesforce funds also will be used to increase science, technology, engineering and math programming for Latinos and African-Americans in STEM fields.

“We have this playbook we created in San Francisco, and now we are bringing it to Oakland,” Frelix said.

This isn’t the first technology partnership for Oakland.

Wilson said his goal is to make computer science a graduation requirement for the freshman class that begins school in 2017 — and that the Salesforce, Code.org and Intel funding efforts are part of the curriculum infrastructure that Oakland Unified needs to build out.

As part of this year’s donations to Oakland and San Francisco schools, Salesforce said company employees plan to volunteer 20,000 hours in the two school districts this school year.

San Francisco Unified Superintendent Richard Carranza said in a telephone interview that this latest investment allows his district to complete its wireless infrastructure in all of the district’s 21 middle schools.

In San Francisco, the $6 million donation will be used to:

Since the partnership began in 2013, the San Francisco school district has hired 19 full-time coaches and teachers for math and technology instruction, reducing class sizes for 8th grade math from an average of 33 students per class to 24.

Besides Salesforce, San Francisco Unified also has partnered with other high tech firms in the region to help students prepare for careers in technology — including Google, Facebook, LinkedIn and game maker Zynga.

Carranza estimates that his school district, which created the nation’s first pre-kindergarten to 12th grade computer science curriculum, has become a pathway for high tech jobs. In recent years these Silicon Valley firms have invested from $10 million to $15 million in the school district, he said.

“This is a game changer,” Carranza said of the investments by all of them.

“If you look at the tech industry and the jobs they create, these companies spend a lot of money to recruit people to come to work for them,” he said. “If they invest in San Francisco schools and don’t have to pay for kids to move here, and build pathways in the school system right in their backyard, economically it makes sense. They check off all of the boxes at once.”