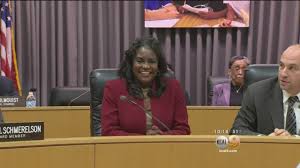 The Los Angeles Unified school board on Tuesday denied renewal requests for five independent charter schools, decisions that could lead to their closure.

The board’s action against three schools operated by Magnolia Public Schools and two by Celerity Schools left their future dependent upon appeals to the Los Angeles County Board of Education and, without a reversal there, to the state Board of Education. Each of the schools was seeking a five-year renewal.

The schools can remain open until the end of the current academic year, at which point L.A. Unified’s role as authorizer ends. Without a reversal of the district’s decision by the county or state before the start of the 2017-2018 school year, the school would close. Whichever board reverses the district would become the school’s overseer.

Over the last five years, the county board has overturned 12 L.A. Unified board denials and upheld seven.

Never before has the L.A. Unified board refused so many applications for charter renewals at once. Over the last five years, the board has approved 155 of 159 renewal requests, according to the California Charter Schools Association. More unusual is that in each case discussed during Tuesday’s meeting, board members praised the schools for superior academic performance but based their denials on issues of governance.

District officials who made the denial recommendations, supported by Superintendent Michelle King, criticized the Magnolia management for its failure to provide documentation on various issues in a timely fashion. Celerity was cited for its relationship with its parent company, Celerity Global Development, which retains powers over the operations of the schools that are outside of L.A. Unified’s oversight. District officials asserted that the parent could make changes in school board members, contracts and other operations that L.A. Unified would have no control over.

The five schools denied renewals are currently serving about 13,000 students.

Cassie Horton, director of regional advocacy for Greater Los Angeles for the state charter association, called the board’s actions “unprecedented,” insisting that the problems cited in the staff reports leading to the denials were “fixed or fixable and have no impact on student outcomes.”

On Monday, the leaders of 64 charter organizations representing 196 schools serving 94,595 students in Los Angeles, wrote to the board, expressing concerns over what the board’s action might portend.

“We are deeply concerned that this month District staff have recommended more charter renewal and material revision denials than they have in the last five years combined, none of which are based on student outcomes,” they said, adding, “If the District is willing to close academically high performing schools largely because of technical and operational issues that either have been corrected or can be fixed, then who’s to say whether our own schools will be next?”

They questioned the board’s motives, saying, “How can we trust that the District prizes quality education and student success above all else?”

The charter association on Wednesday released a statement, saying, “For a long time, charter schools were evaluated mostly on the degree to which they were helping students learn. Those days are over. Now charter schools are judged on whether they are able to fit squarely into the box they were designed to break out of. They are judged on how much revenue they generate for school districts, cities and special interests.”

The optics of the board’s rulings reflected other issues – some discussed at the board meeting, some left for conjecture.

Magnolia Public Schools, which operates eight schools in Los Angeles, one in Orange County and another in San Diego, has been criticized for years for alleged ties to the Turkish cleric, Muhammed Fethullah Gulen, now a resident of Pennsylvania. Gulen, who is not a member of the Magnolia board, has been accused by the Turkish government of using money from charter schools to finance efforts to overthrow the current Turkish government. Gulen has denied those allegations.

Without citing evidence, detractors have also accused him of influencing instruction in Magnolia schools, a charge that Caprice Young, Magnolia’s Chief Executive Officer since January 2015 and a former president of the LA Unified board, says has never occurred.

District officials have also criticized Magnolia for spending nearly $1 million on visas to bring in teachers from Turkey, a practice that Magnolia officials insist has ended.

While the denial recommendations made no mention of Gulen or Turkey, Jerry Simmons, a lawyer representing Magnolia, addressed the board on Tuesday and called them “the elephant in the room,” accusing the board of “discrimination based on nationality and religious beliefs.”

The Magnolia schools, he said, “have never done anything but provide world-class education to inner-city kids in Los Angeles.”

The other issue, unspoken at the board meeting, is the continuing decline in enrollment in L.A. Unified’s district schools, a trend that is costing the district hundreds of millions of dollars and is widely blamed on the growth of charter schools. L.A. Unified has more of them than any district in the country and is bracing for more, through a California Charter Schools Association campaign to serve 1 million students by 2022.

Currently, there are 228 independent charter schools accountable to L.A. Unified, a 22 percent increase over the last five years. By June, there will be 223.