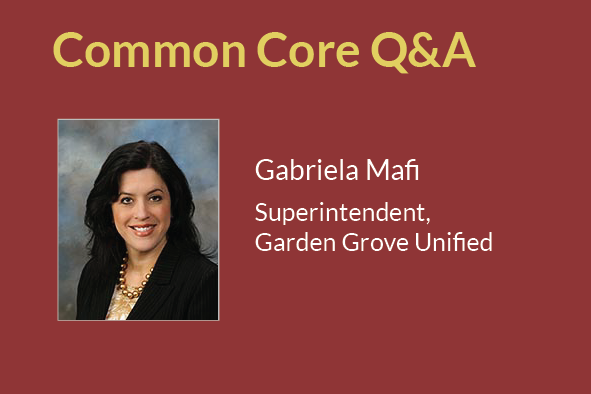 EdSource is conducting a series of interviews featuring educators’ experiences with the Common Core State Standards. Garden Grove Unified is one of six districts that EdSource is following during implementation of the new standards. For more information about the Common Core, check out our guide.

Gabriela Mafi, superintendent of the Garden Grove Unified School District, is a Latina raised in urban Los Angeles. She is a first-generation college graduate who received her master’s and doctoral degrees in Urban Educational Leadership from the University of Southern California. She has been superintendent in Garden Grove, in northern Orange County, since the summer of 2013, after a career that included serving as a K-12 teacher, an adjunct college professor, and an assistant superintendent of secondary education.

The following are edited excerpts from an EdSource interview with Mafi about the changes in her district under the Common Core.

What stands out to you as the most specific change you’ve seen for students under the new Common Core State Standards?

There’s a very thoughtful vertical design which was not present in any of the previous iterations of standards. With the previous standards, if you had a 2nd-grade teacher and a 7th-grade teacher, their terminology was completely different; it was like a Tower of Babel of sorts in that there was little continuity across grade levels and one didn’t necessarily see how these standards built upon each other from year to year.  Now, we have a clearer pathway for student learning from kindergarten through 12th grade.

In terms of the content of the standards themselves, there’s a much greater focus on analysis and on expository reading and writing across content areas that was not as prevalent in previous standards. This is especially important as the majority of reading in college and careers is non-fiction.

When it comes to the assessments, what we saw in the field tests is a much higher level of rigor. There are so many more elements now than just filling in a bubble with your pencil. Students now have to explain their thinking on a mathematical problem or a response to a reading passage. The questions are more open-ended and require greater critical thinking.

What do you see as the biggest challenge presented by the new standards?

We are concerned about the lack of textbooks and materials aligned to the new standards. We’ve just now finished piloting the state-approved math program to launch in the fall. However, the English Language Arts materials aren’t available yet; the state is approving them sometime this coming fall. In the interim, we’ve been using materials we adopted back in 2002 and 2003, which aren’t aligned with the new standards.

Are you seeing any opposition to Common Core?

There is opposition, but we haven’t experienced it much with parents of our students. There are some community groups in the county, however, many of whom have chosen to home-school their children, and who hold very strong beliefs against the Common Core which often manifest in hyperbole about practices that bear no relationship to the effective instruction seen in Garden Grove. Often just that phrase, “Common Core,” is so charged. Many do not realize that the California Department of Education regularly updates academic standards for all schools in the state, and these standards have been and will continue to be updated periodically.

We don’t call the new state standards “Common Core” because they are truly the latest iteration of the California standards. As we’ve interacted with both parents and community members during some parent nights and at board meetings and other events, we’ve said, “You know, the standards are developed at the state level. That’s not something that we have control over, and while we are required to teach the state standards, we’re continuing to focus on the same good instruction we have always provided our children, and you’re going to see those same positive results continuing even as the standards continue to change over the years.”

How do your teachers feel about the new standards?

In general, we’ve had a very positive reception from our teachers, staff, and students. They are all embracing the change. Our district has worked hard to ensure teaching resources, including instructional technology and student assessments, are available so that teachers may implement the new standards as seamlessly as possible.

At the same time, a great deal of change at once can be difficult, and one of the challenges of the new standards, although it’s not insurmountable, is that both math and ELA standards have changed at once. Typically in the past, the math standards would change, and then a few years later the English language arts standards would change. In this way, you wouldn’t have all the textbooks needing to be updated at the same time. Add to that, at the same time, an entirely new assessment (that’s taken, for the first time, on computers). So what’s been a challenge for our folks is that even as they’re enthusiastic and they’re extremely professional and conscientious, it can be stressful to experience that much change, and be dealing with it all even as you’re teaching students every day. So we recognize our teachers may feel overwhelmed by all of this change. It’s our job to be the support for them, to help them to feel good about what they’re doing and let them know that we are all learning together and no one expects perfection.

The new standards really have caused people to want to collaborate more, to want to discuss and share more. So I think there’s been a greater emphasis on that, even as we’ve always had a very collaborative culture in our district. Our teachers are enthusiastic about collaborating. They like working together, and we have a very robust professional development program that emphasizes collaboration. We have various meetings, networks, and online resources which allow teachers to share lessons. In each of our schools, teachers have collaboration time built into the day.