Starting early on college and career 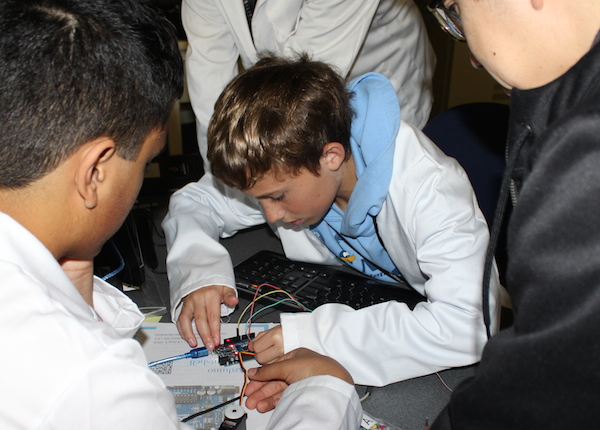 Efforts to prepare students for college and careers are taking hold earlier and earlier, expanding beyond high school so that even students in primary grades are participating in university tours and job exploration events.

The kindergarten-through-6th-grade classrooms at Katherine Smith Elementary School in San Jose “adopt” a college and participate every Monday in a schoolwide assembly that culminates in chants where students show off their college pride.

And Metro Ed in San Jose, one of the oldest regional occupational education programs in the state, is introducing new programs this year for middle school students intended to introduce them to careers in Silicon Valley’s rich STEM fields – science, technology, engineering and math.

“I love it,” said Christian Chiong, 13, an 8th-grader at Peterson Middle School in Sunnyvale and a participant in Metro Ed’s first Step-Up to STEM program for middle school students earlier this month. Christian learned engineering concepts and computer programming through projects with paper airplanes and flashing LEDs, taught by a working engineer.

“I think this is really valuable to see career options,” said Christian, who said he wanted to learn more about computer programming and binary coding. “There are so many jobs in the field.”

Efforts to introduce young students to their futures aren’t necessarily new, but educators say the message is gaining increased focus under the Common Core State Standards, which list college and career readiness as a main goal. The standards, adopted by California and 43 other states, outline the skills students should have in math and English to be prepared for life after high school.

California has also made college and career preparation a centerpiece of the Local Control Funding Formula, which changed how schools are funded. And measuring how well campuses are preparing graduates for jobs and college is likely to play a large role in ongoing discussions about creating a broader accountability system for schools that would move beyond standardized test scores to include a number of other factors.

“If you start talking about it in high school, it’s too late,” said Dino Battaglini, assistant director of secondary education for the Fairfield-Suisun Unified School District.

“The bottom line is we really need to be going into younger grades and letting students know what it takes to get to college and to get to a career,” he said.

“It’s hard to capture the look in their eyes once they get to the university, the awe,” said teacher Deborah Kearn, who leads her 5th-graders on annual tours at Long Beach State University.

Battaglini’s district used state money last year to hire new additions to its staff roster – four college and career technicians at district middle schools. The classified staff members provide information and outreach to students to get them thinking about their futures, arrange career fairs and tours to area colleges and universities, meet one-on-one with students to discuss future aspirations and offer other guidance.

The ramped-up efforts give students vital information, Battaglini said, but more than that, they set an expectation that students need to prepare now for life after high school – whether they intend to go to college or pursue another avenue, such as military service or a trade school.

“This is part of life now,” he said. “(Students) know college and career is there, and hear it over and over.”

While many say the efforts are crucial to get students thinking early about their futures, the push is not without critics.

Tamia Farley, a college and career technician in the Fairfield-Suisun district, said she’s heard from parents and some teachers questioning the early focus, saying students are too young to choose their future path. A New York elementary school made national headlines last spring when it cited the need to prepare children for college and career as the reason it canceled an annual year-end show put on by kindergartners.

“That kindergartner or 1st-grader, and even into 2nd grade, they can’t understand or grasp the notion of college,” said Marcy Guddemi, executive director of the Gesell Institute of Child Development. “They don’t really understand what middle and high school is. Kids know the here and now. They’re not even ready to tell time yet.”

The middle school level is the best place to begin introducing students to the concepts, Guddemi said. Students are better able to focus on the topics around the 7th or 8th grade, when much of a student’s self-exploration begins, she said.

Focusing too early on college and career “is kind of like brainwashing that child about something they don’t really understand,” Guddemi said. “There’s so many better things and more valuable and more appropriate things that should be happening, so why waste the child’s time.”

Aaron Brengard, principal at Katherine Smith Elementary School, said he does joke “in a tongue-and-cheek way that it’s positive brainwashing.”

“We just surround our children with college symbols,” he said. Every classroom has adopted a college or university, and each classroom has its own college cheer. A “road to college” is painted – literally – on the pavement at the campus, where a path is marked in yellow paint terminating in block letters reading “College Bound.”

Yet the message serves an important purpose at Smith Elementary, where 81 percent of students qualify for free and reduced-price meals. Administrators and teachers “reinvented” the school in 2012, moving away from a previous focus on raising standardized test scores in favor of a project-based learning model that promotes hands-on learning, critical thinking, collaboration and reasoning skills. The campus sets an expectation that students can achieve at high levels to help build the skills they’ll need to succeed, Brengard said.

“The college symbolism is really helping us with the messaging,” Brengard said, “but the true college prep for us is in our projects.”

For 5th-grade teacher Deborah Kearn, the early efforts can be life-changing, especially for students who are first in their families to attend college.

“It’s hard to capture the look in their eyes once they get to the university, the awe,” Kearn said. “There’s just an energy at the collegiate level.”

The tour is a capstone of a lesson plan that introduces students to college with topics such as the benefits of higher education, an introduction to the complement of courses, called A-G, that are required for university admission, and a “college awareness” assessment quiz.

Three-quarters of the students at Birney are low-income and a quarter are classified as English learners. For many students, the college tour is the first time some have been across town, Kearn said, let alone to a university campus.

“Most of my kids probably have not seen a whole lot,” she said. “Their parents are not college graduates. It (the tour and lessons) really motivates them. They get to know what they have to do to get to college, and it changes their perspective on the obtainability of a degree.”

The program is part of the Long Beach College Promise, started in 2008 to boost college-going rates in the district. A partnership with Long Beach City College and Long Beach State, the initiative offers a free semester of tuition at the city college and guaranteed admission to Long Beach State, for students who meet the minimum entrance requirements.

The district-wide program starts in 4th grade, when students are first introduced to a college campus through tours of Long Beach City College and an accompanying lesson plan. The 5th-graders graduate to tours at the university.

The effort continues throughout students’ middle and high school years. Middle school students sign a “promise pledge” to “take school seriously” and “prepare for my future by behaving like a scholar.” The district offers expanded support systems, parent and student information nights and additional resources aimed at securing student success.

Long Beach Mayor Robert Garcia recently added the city to the partnership, and has pledged to extend the effort to preschool, in addition to increasing the number of internships available to high school students.

The goal of early outreach isn’t to lock young students into a college or career choice, but rather to expose them to the range of possibilities to help them stay focused and engaged in school, said David Militzer, education programs consultant at the California Department of Education.

“It’s on their mind whether they talk about it or whether we talk to them about it,” said Militzer, who encourages students to use the self-assessment and career exploration tools at the California Career Zone website to get an introduction to possible futures.

“It’s not that a career focus is everything,” Militzer said. “But it should be included because everybody is going to have a career. Look at what we’re seeing in high school dropout rates, in college remediation rates … It’s very short-sighted to say we shouldn’t be talking about careers for kids.”