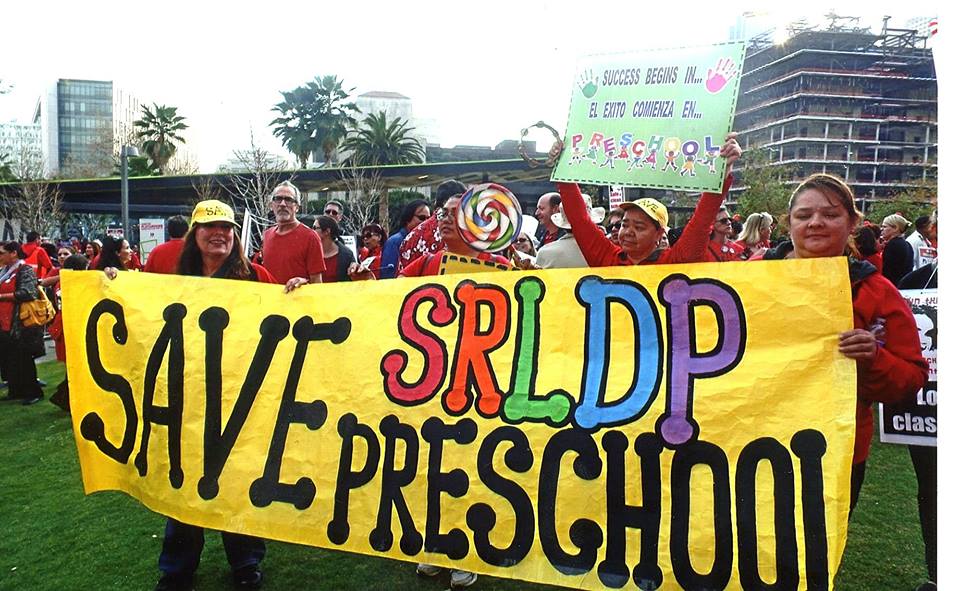 A popular and well-regarded preschool program in Los Angeles, which was created more than three decades ago to help children and their parents in low-income, racially and ethnically isolated neighborhoods of the city, would be shut down over the next two years under a district proposal to cut costs.

The specialized program, known as the School Readiness Language Development Program, has been in the budget-cutting crosshairs for several years. Now, Los Angeles Unified School District Interim Superintendent Ramon Cortines’ budget plan proposes to eliminate the program, which currently serves about 10,000 4-year-olds – nearly one-third of the 35,000 pre-kindergarten slots offered by the state’s largest school district. At its peak, the preschool program enrolled about 16,000 students.

Maureen Diekmann, executive director of the district’s Early Childhood Education programs, said Cortines, who returned to the district this year as interim superintendent, “has been a supporter of early education for years.” But she added, “This is not about that. This is about money.”

The program, which began in 1979, is currently in 289 district schools and employs 311 teachers. It is the district’s only preschool program that is funded entirely from the district’s general fund.

Students participate in the program Mondays through Fridays, for a maximum of 2 hours and 35 minutes per day. Its focus is developing students’ language abilities, whether they are English learners or students whose native language is English.

Jennifer Charnofsky taught kindergarten classes in the district for 10 years before she was hired for the program, not to work directly in the classroom with students, but with parents of preschoolers to help their kids be better prepared for school.

“We were dealing with very, very poor parents,” Charnofsky said. She and the other teachers required parents to commit to a series of classes for parents, once a week for 10 weeks, in return for their children being allowed to enroll in the preschool. Classes for parents focused on topics such as discipline, nutrition, cognitive and emotional development and child abuse.

Using teachers to train parents worked, she said, and their 4-year-olds acquired language and early math skills needed for kindergarten that their peers who weren’t in the program hadn’t learned. The difference was dramatic, Charnofsky said.

Many kindergarten children who did not have access to programs like the one now being considered for closure had “never been away from mom,” and were significantly disadvantaged compared to their peers, she said. “They didn’t know colors had names, and they didn’t know how to hold a pencil or work with scissors. SRLDP kids knew all of that.”

The district ended the parent-teacher part of the program in 2013, and Charnofsky and the other teachers dedicated specifically to parent training were laid off.

Cortines contends that the district, which has funded the program since its inception, can’t afford to continue funding it alone, at a cost of $16 million a year, while 86 other preschool programs run by the district serve about another 10,000 children and receive some funding from the state or the federal government.

The district also enrolls about 15,000 children in transitional kindergarten, which is an extra grade for some 4-year-old students who aren’t old enough to enroll in kindergarten at the beginning of the school year.

Cortines is hoping for extra funds for the district when Gov. Jerry Brown releases the revised state budget early next month. The Legislative Analyst’s Office says it expects revenue statewide will exceed early projections for the coming fiscal year.

More funding from the state may keep the popular preschool program going. But it might not, depending on other Los Angeles Unified budget considerations. The district just approved a three-year contract with its 35,000 teachers that will cost nearly $700 million. The district has projected a $113 million deficit in the next budget year, which begins July 1, followed by a $559 million deficit in the 2015-16 year.

The proposed cuts to the Los Angeles preschool program, which has been praised for its role in building parental engagement and teaching English, come as lawmakers across the state are pressing for additional state funding to create enough preschool spaces for all low-income 4-year-olds in California.

AB 47, authored by Assemblyman Kevin McCarty, D-Sacramento, would require the Department of Education to come up with a plan by June 2016 to expand the state preschool program to serve all eligible low-income 4-year-olds who currently don’t have access to a year of state preschool or transitional kindergarten.

“It’s a popular program and it has been around for a long time, so there is a lot of passion around it,” said school district spokeswoman Monica Carazo, referring to SRLDP.

As part of the current year’s budget package, lawmakers and Gov. Jerry Brown promised to add 31,500 more preschool slots for low-income families in the coming years. This year, the state is spending $219 million to add state-funded preschool slots for 10,000 low-income families. For the 2015-16 year, an additional $35.5 million is set aside to expand the state preschool program by 4,000 full-day, full-year slots, according to the California Department of Education.

Charnofsky, who is retired, said she can’t fathom why the district proposes to cut funding for the program, which amounts to less than 1 percent of the district’s expected $7.3 billion budget for the 2015-16 year.

Silvia Leon, one of the first teachers hired to teach in the preschool program, likes to recount her students’ success stories, which are considerable. “Some of my students are professional people,” she said. “One of them just received a Ph.D in education. He recognized me and said, ‘That’s my preschool teacher.’”

But perhaps her favorite story is about one of her students, a boy who lived inside an apartment most of the time because the landlord would not let children play outside.

“His mom doesn’t drive, read or write,” Leon said. “He couldn’t ride a scooter or hold a pencil. But as time went on, he became involved in school. This has opened his world. He now goes down the slide. He’s starting to speak English to his friends. It makes all this worthwhile.”

Monica Carazo, a district spokeswoman, said it’s understandable that parents, teachers and community organizers are upset about the proposal to cut the program. “It’s a popular program and it has been around for a long time, so there is a lot of passion around it,” she said.

“We don’t have adequate funding,” said Los Angeles Unified’s school board president Steve Zimmer. “There’s no way around it. I think we will find a way to reduce drastic cuts. But this is no way to live.

The budget pressures that have led to the proposal to shut down the program are considerable. The district is struggling to maintain programs as a result of declining enrollment that is the result of declining birth rates in its boundaries, and means that the district receives less funding from the state based on its “average daily attendance.”

In addition, the growing number of charter schools in the district are directly funded by the state. Megan Reilly, the district’s chief financial officer, said that trend has resulted in the loss of $100 million in revenue each year that would have gone to the district but instead follows students to the charter schools they attend.

The LAUSD school board will have the final say on whether to keep the preschool program alive. It must approve a budget by July 1.

But that is increasingly difficult now, with deficits looming for at least the next two years.

“We don’t have adequate funding,” Zimmer said. “There’s no way around it. I think we will find a way to reduce drastic cuts. But this is no way to live. Our budget has made it so that every year, instead of talking about how we can build, we are constantly talking – not about how to build, but how to save. It’s exhausting.