Middle-class families get little help in paying for early care 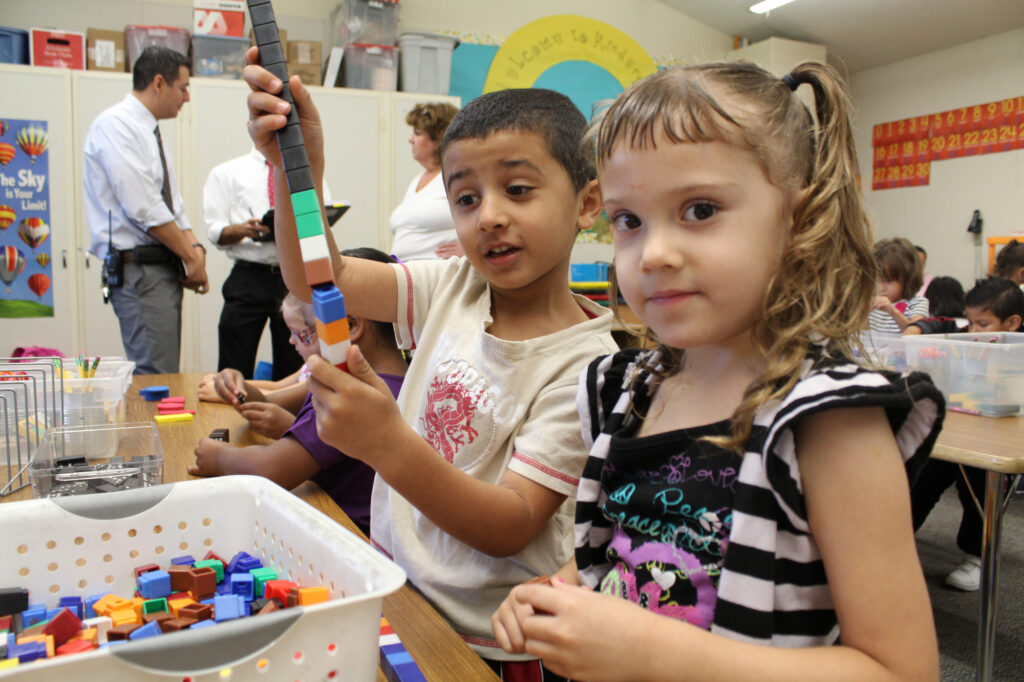 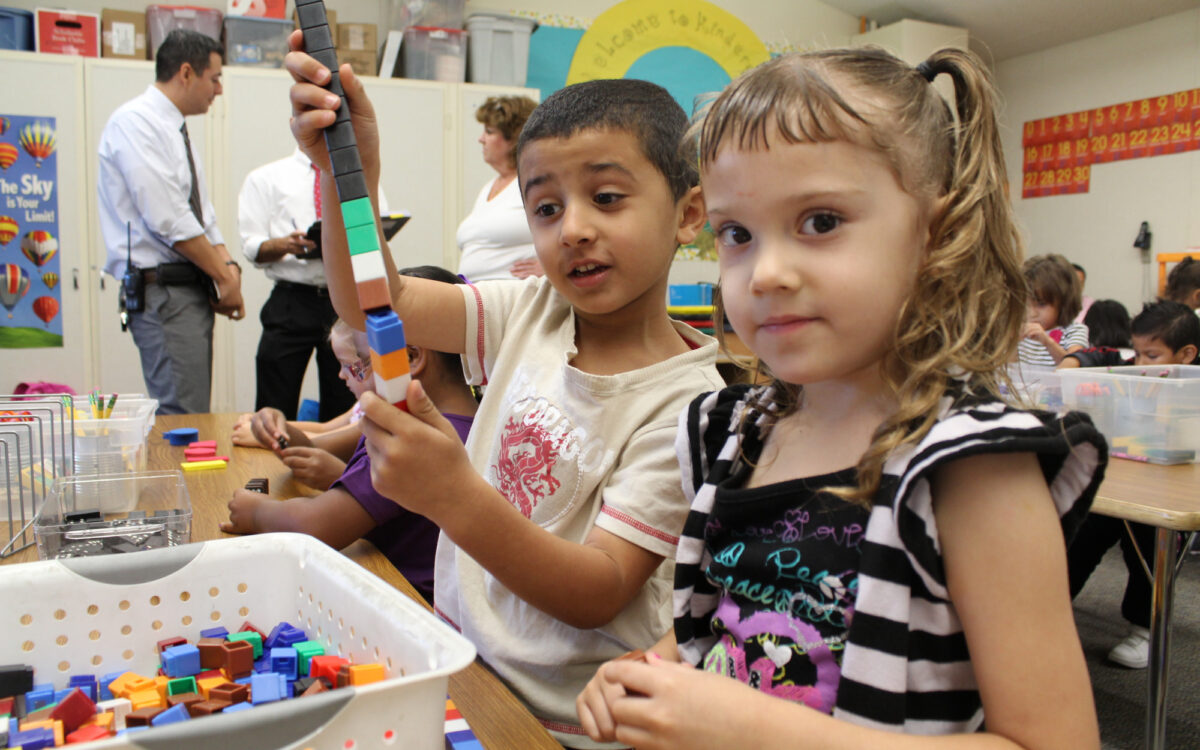 While Gov. Jerry Brown battles the University of California regents to keep a lid on undergraduate tuition, the rising cost of childcare and preschool are often a bigger concern for middle-class families in the state – and one that is noticeably absent from the state’s public policy agenda.

For many middle-class families in California, the price tags for pre-kindergarten programs are major budget breakers, with parents paying as much as $24,000 a year per child. By comparison, a year of UC tuition and fees costs about $13,000 per student.

In the past year, the state has increased the number of subsidized childcare and preschool slots available for low-income families. But middle-class families get little or no help, despite ample research showing that high-quality early care makes a big difference in academic and other long-term outcomes for all children.

“The cost of being in the middle class – and of maintaining a middle-class standard of living – is rising fast,” according to a report last year by the nonpartisan Center for American Progress. “For fundamental needs such as childcare and health care, costs have risen dramatically over the past few decades, taking up larger shares of family budgets. The reality is that the middle class is being squeezed.”

That burden can add extra stress during an already stressful time for parents, who may need to cut back on other expenses – or settle for lower-cost, and lower quality, childcare centers or preschool.

Amanda McClure Shavers, a stay-at-home mother of two in the city of Alameda, enrolled her daughter Emily in a cooperative preschool in 2009, at a cost of $360 a month. The tuition was so low because parents were required to provide volunteer help. The family budget – which included rent on the house and student loan payments for Amanda and husband David – wasn’t big enough to support paying any more.

Six years later, Emily is a 3rd-grader in a public school and the Shavers are better off financially after David, a filmmaker, landed a well-paying job at Pixar Animation Studios. Their second child, Nolan, turns 4 in June and heads for preschool in the fall. His parents hope to enroll him in a private preschool – at a much higher cost than their daughter’s preschool.

They are expecting to pay as much as three times more than they did for their daughter’s school. They now can afford $1,000 a month for preschool – but it still comes with a bit of sticker shock.

“Where I come from, that was a house payment,” said Amanda, who grew up in Austin, Texas.

“For fundamental needs such as childcare and health care, costs have risen dramatically over the past few decades, taking up larger shares of family budgets,” according to the nonpartisan Center for American Progress. “The reality is that the middle class is being squeezed.”

Their situation is typical for middle-income families in California, where preschool costs are among the least affordable in the nation, according to a 2013 report by Child Care Aware of America, a nonprofit, nationwide information and referral organization.

Last year there was a major push in California to expand transitional kindergarten to all 4-year-olds, regardless of family income. Transitional kindergarten is in effect an extra year of kindergarten, for which only 4-year-olds who turn 5 between Sept. 2 and Dec. 2 are eligible. But rather than expanding the program, Brown and the Legislature chose instead to increase by 11,500 the number of state-subsidized, full-day preschool openings for low-income children.

Darrell Steinberg, the former state Senate President pro Tempore who championed universal preschool for every 4-year-old child in California before he was termed out last year, told EdSource that the top priority for state preschools should be to serve low-income families first. But he added: “There are folks just above that line who have a great need for quality preschool but can’t afford it” without financial help.

Steinberg said he hopes the current Legislature “moves that line up some more, so that more families are eligible.” Another option, he added, would be to create a sliding scale of fees, based on family income, that would make it possible for middle-income families to afford preschool costs.

There was a brief period when the United States offered free care to all preschool children. In the throes of World War II, the federal government created its first – and only – national childcare system. The Lanham Act, as it was known, was signed by President Franklin Roosevelt and lasted just three years, from 1943 to 1946. But in that time, more than half a million children received free childcare, up to six days a week, while their mothers were pressed into the workforce in communities with defense industries such as Richmond’s Kaiser shipyards.

Twenty-five years later, Congress, with bipartisan support, approved another national childcare program, known as the Comprehensive Child Development Act, which aimed to create a nationwide network of childcare centers that would offer care for children while their low-income, single parents worked.

But President Richard Nixon, who had publicly supported the legislation as a way to help low-income mothers move from welfare into full-time jobs, vetoed the legislation in 1972. His veto was widely viewed as an attempt to reassure critics of his “opening to China” trip that he wasn’t attempting to set up a system of state-sponsored childcare in the United States.

Today, a few U.S. cities, including San Francisco, Los Angeles and most recently New York, are working to build universal preschool programs open to all 4-year-olds. New York City Mayor Bill de Blasio aims to follow the example of Oklahoma, which adopted a program in 1998 that offered free access to preschool for all 4-year-olds in the state. Georgia is the only other state with free, universal pre-kindergarten programs.

New York is the first big city in the U.S. to combine funding from the state, federal Head Start, city social services departments, community-based organizations and fees charged to parents to support a rapid expansion in pre-K enrollment, according to a new study from UC Berkeley’s Institute of Human Development. But the city has a ways to go to meet its goal of offering free preschool for all 4-year-olds, regardless of family income.

The city’s 99,000 preschool slots are spread among low-, middle- and higher-income neighborhoods. Currently, the vast majority of those slots are in private schools that charge fees, and the rest are subsidized by the city, state and federal governments, according to the UC Berkeley study.

Last year the mayor’s office created 26,000 new full-day slots in the city, with 40 percent of those slots in middle- to upper-middle-class communities where families earn more than the city’s median annual household income of $58,000, and de Blasio has promised to expand the program even more into middle-income areas of the city.

Bruce Fuller, a UC Berkeley education professor and expert in early childhood education who led the study, praised de Blasio for “trying to help kids,” but said New York’s priority should be to first help low-income families, including 12,000 4-year-olds in the poorest parts of the city who aren’t enrolled in the universal preschool program.

Still, there is no widespread agreement on how government – at the local, state and federal level – can make preschool and childcare more affordable to more middle-class families.

“We have to start with the lowest-income children,” said Mark Friedman, co-chair of Raising Californians Together, referring to efforts to expand programs to help the poorest California children. “But we can’t stop at that.”

In his State of the Union Speech this year, President Barack Obama proposed providing financial relief to middle-class parents by increasing the federal child-care tax credit to a maximum of $3,000 for two children, triple the current credit of $1,000. But even if the plan manages to get Congressional approval – which seems unlikely – it would  barely make a dent in a family’s total childcare expenses.

Mark Friedman, who co-chairs Raising California Together, a coalition of labor groups, early education advocates and community groups, hopes to “fundamentally change the priority of early education in the state.”

The coalition and other groups are pushing to expand full-time pre-kindergarten slots for low-income families in California. Families of four that earn less than $23,850 a year qualify for Early Head Start and Head Start programs. The same-sized family qualifies for the state’s full-time preschools if its annual income is less than $46,896.

But what about California parents who aren’t low-income and who need care for their young children?

With California enjoying a fiscal surplus after years of deep budget deficits, there is an opportunity now to invest more money in early education, Friedman said. But he acknowledged that the state isn’t likely in the near future to get free universal preschool like Oklahoma.

“We have to start with the lowest-income children,” Friedman said. “But we can’t stop at that.”