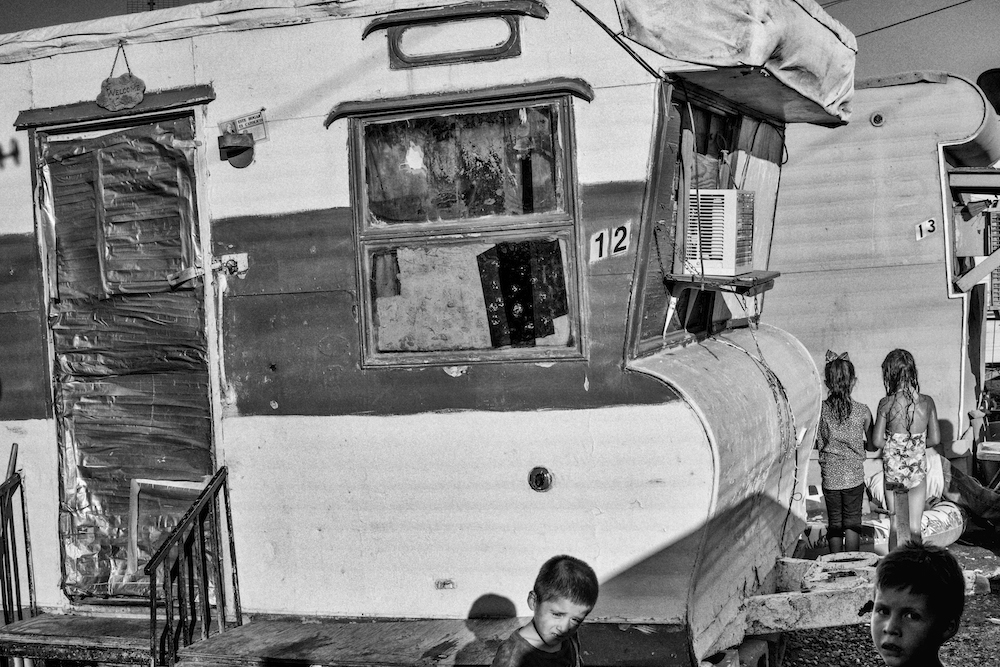 Reedley, Calif. – As Juan Garza, the superintendent of the Kings Canyon Unified School District, drove around this farming community last month, he slowed the district’s electric car down to point out the visible victims of California’s historic drought.

Irrigation canals filled with yellow weeds and cracked dirt. Fruit-packing houses shuttered and abandoned. And homes with crude tarps and plywood extensions that provide shelter for families who lost their jobs and housing in this small community 25 miles southeast of Fresno.

“The worst,” Garza said, gazing at rows of peach and nectarine trees, “is yet to come.”

With Gov. Jerry Brown imposing new mandatory water reductions to respond to the statewide emergency, school districts are grappling with how to adhere to those requirements while continuing to meet the needs of students and communities. As of June 1, districts were ordered to start slashing their water usage anywhere from 4 percent to 36 percent, depending on each district’s water supplier. They potentially face fines for failing to meet those mandates by 2016.

Lettuce pickers are dropped off in Huron, Calif. School districts in farming communities are worried about losing students as the drought forces farmworker families to move in search of jobs.

“The worst is yet to come,” said Juan Garza, superintendent of the Kings Canyon Unified School District.

But the stakes are even higher for some California districts, especially in the central region of the state. Some wells serving schools are drying up. One district uses a “dust day” schedule to keep children inside when intense winds sweep up dirt from the surrounding parched fields. The drought’s ripple effects, however, could prove most devastating for school systems like Kings Canyon Unified, where most families work in agriculture, packing produce or picking crops, such as peaches, nectarines, and grapes.

The 10,000-student district is in the San Joaquin Valley—the nation’s agricultural epicenter—which stretches from Fresno to Bakersfield. The severe water shortage here has forced some farmers to reduce the acreage they plant, leaving far fewer jobs for farmworkers. Garza said some of Kings Canyon’s families—almost 90 percent of whom are poor and Hispanic—have been forced to seek work elsewhere and, as a result, enrollment dropped by 200 students in 2014-15. That equates to a roughly $1 million loss in state funding.

“We feed the world here in this valley,” explained Anita Betancourt, the district’s adult and parent program coordinator and a Reedley City Council member. “But [without water], there’s no work. If families have to move from here to there to find work, the children are going to be displaced.”

The drought’s impact is being felt throughout the state with Gov. Brown calling on all Californians, including homeowners, school districts, and businesses to drastically cut water use. To meet the edict, all districts should be adopting water-conservation plans, said Jenny Hannah, the chief facilities officer for the Kern County Office of Education.

Hannah, who also is chairwoman of the Coalition for Adequate School Housing, a nonprofit that supports efforts to fund K-12 school construction in California, said some districts have already adopted water-conservation strategies, such as installing artificial turf and low-water flush toilets. Complicating those efforts, however, is the state law that requires districts to make school grounds available to the public, particularly playing fields, Hannah said.

Children play in an alley in Mendota, Calif., one of many farming communities in the San Joaquin Valley that is suffering from the effects of a multiyear drought.

Water suppliers are offering incentives to cut down usage and the State Water Resources Control Board awarded $30 million to districts last month to fund water-conservation projects.

By its very nature, though, California’s geographic diversity makes it difficult for a statewide edict to be applied evenly, said Joe Dixon, the assistant superintendent for facilities and governmental relations for the Santa Ana school district in Orange County. While the district is looking to reduce its water use by 12 percent, the reduction required for Orange County Unified school district is 28 percent, Dixon said. He said school districts would likely need to ask for special consideration from their water suppliers.

In addition to watering more efficiently, Dixon said districts may opt to not water at all.

Green space is almost a thing of the past for the tiny Alpaugh district, about 50 miles northeast of Bakersfield. “It looks like a ghost town out there with all the dust blowing,” said Superintendent Robert M. Hudson.

Last month, the 380-student district called for a “dust day schedule” to keep students indoors and away from what Hudson described as the “grit that can get into your mouth and burn your eyes.”

In Orosi, another San Joaquin Valley community, a well at Orosi High School was shut off last fall after water tests showed unacceptable nitrate levels. Yolanda Valdez, the superintendent of the Cutler-Orosi Joint Unified school district, said the district applied for a state grant to fund the construction of a new well.

Valdez, a former farmworker, said this drought is the worst she’s encountered.

An irrigation canal near Corcoran, Calif., is just one visible sign of the state’s most severe drought on record.

The Kings Canyon district is experiencing almost every aspect of the drought’s fallout: declining enrollment, school wells drying up, elementary students complaining of stomachaches, and most of all, the anxiety of families desperately searching for work.

It wasn’t always that way. Superintendent Garza said the district was growing by 300 students a year less than a decade ago. Signs of renewal, like new strip malls, appeared in Reedley, home to about 25,000 residents. Families were buying and building homes. Last year, the district opened a new football stadium in one of its high schools.

The drought, however, has put the brakes on much of that progress. In Reedley alone, about four fruit-packing houses have closed and farmers are pulling out their crops or planting almond and pistachio trees which require fewer farm laborers. Plans to build three more schools have been shelved. The district is projecting the loss of another 100 students in the 2015-16 school year.

Miriam Cardenas, the district’s health center specialist, said this summer’s picking season would be pivotal. If there isn’t enough work, even more families might be forced to leave the area. “I think that there’s a level of fear growing in parents because the reason why they came here was in hopes of a better life for their children,” she said. “Farm labor is what they know…so getting the family and moving seems like the better option.”

Meanwhile, Kings Canyon Unified has tapped its reserves and frozen unfilled non-teaching positions to try to absorb the $1 million shortfall. Garza said the district is applying for a waiver from the state to recoup some of those lost funds.

The district’s newest high school, Orange Cove, exemplifies both the future the district is striving toward and the challenges brought by the drought.

Orange Cove High School serves about 650 students, which is less than half of the college campus-like school’s capacity. The school is in the city of Orange Cove, one of the state’s poorest communities with nearly half of its 10,000 residents living below the poverty line.

Workers harvest asparagus near the town of Firebaugh in California’s San Joaquin Valley. Some school districts in the state’s farm belt are coping with multiple impacts of the drought: declining enrollment, dry wells, and the anxiety of families searching for work.

Despite the drought, teachers and staff at Orange Cove are trying to keep students’ lives as normal as possible. Students can pay for the prom in installments. Physicals, which are mandatory to participate in extracurricular athletics, are provided for free.

“[The drought] should be our concern, not the students’ concern,” Assistant Principal Gloria Valencia said.

But Orange Cove senior Candelaria Solorzano admits the drought worries her. Her parents are farmworkers. She sees that there’s little water in the irrigation canals near her home. The 18-year-old is all smiles, however, as she discusses plans to attend a local community college in the fall, rather than Fresno State University, so she can save money to buy a car.

“I want to start working in agriculture,” she says. “It’s hard work but I feel like with that experience, I’ll appreciate my money more.”

This story appears courtesy of Education Week. Reproduction is not permitted.