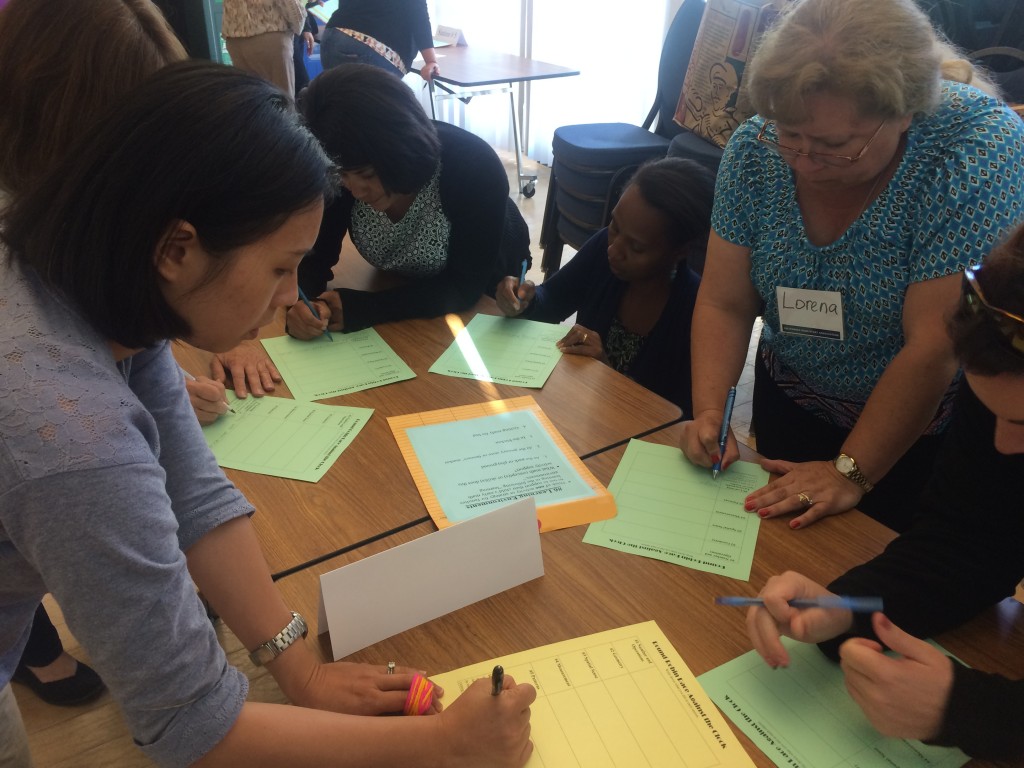 One of Cindy Darden’s favorite parts of the day is when she picks up her 3-year-old daughter Kailey at a Head Start center in Glendale and hears what she has to say. These days, Darden is getting an earful about math from her daughter and her daughter’s teachers at school – a recognition of the need for children to master basic math concepts at an early age.

Darden, 27, is a full-time parent who plays a key role as a teacher to her daughter – both as a volunteer at the center and at home. She uses every opportunity to integrate math concepts into daily activities at home and in the community. When mother and daughter go on walks, Darden uses spatial concepts, such as: “Is that tree small or big?”

When they go to the library, the girl can check out five books – and is expected to count them on the way to the checkout counter. When the family sits down to dinner, Kailey’s father, Jose Silva, joins in on the math conversations.

Darden’s involvement in her daughter’s math and word learning, whether at home or out and about, uses lots of words to reinforce basic math concepts. Darden’s participation foreshadows what may be in store for other Head Start parents in California, who will be encouraged to do the same in the coming months – and have fun at the same time.

The initiative, known as the Early Math Family Engagement Project, is one of the first programs in the nation to emphasize the key role parents can play in teaching early math at home and in other environments. It is a project of the California Head Start Association, which represents nearly 160 Head Start centers and their satellite sites in the state. The program will offer two-day training sessions to teachers and others around the state. Head Start serves approximately 130,000 children in California.

Darden got a jump-start in teaching her daughter early math because Head Start Centers in Los Angeles County, including the one her daughter attends, have emphasized early math instruction for several years, with help from Head Start’s Early Childhood STEM Institute, which sponsors annual conferences in Southern California.

Experts in early education say the Early Math Parent Engagement Project is important because research indicates that early math skills are among the best predictors of a student’s success in math or literacy, said Rick Mockler, executive director of the state association, which is implementing the new program with a grant from the Los Altos-based Heising-Simons Foundation.

The interest in early math has been driven in part by research findings that math concepts acquired at a preschool level are “the most powerful predictors of later learning,” even more than reading and writing, as described in an EdSource report, “Math in a Child’s World.”

Reaching out to parents

While federally funded Early Head Start and Head Start programs have long encouraged parents to help in their children’s learning, the goal of the math project is to reach a lot more parents, who will learn how to impart basic math concepts to their kids. The broader aim of the project is to boost Head Start students’ competency in math so that they are prepared for school when they reach kindergarten.

A range of recent assessments in California suggest that Head Start students are lagging in math, said Laura Keeley-Saldana, who is managing the project for the California Head Start Association.

As a first step toward improving kids’ math learning at home, Head Start administrators, known as education managers, and those dealing with family health and well-being, known as family services managers, began receiving professional training last summer so that in the coming months they will be able to teach front-line staff how to engage parents to best teach their kids math.

“We hope that families will work more consistently on early math concepts,” said Keeley-Saldana. Head Start parents already are asked to read to their children daily, Keeley-Saldana said, adding. “It would be great if we can get families to get to early math in the same way.”

At one of the first training sessions, held at a community center in Foster City, south of San Francisco, about 30 managers from nine Head Start centers in Northern California spent two days in late September learning the basics of teaching early math to children from birth to 6 years old – with a focus on numbers and counting, measurement, patterns, and geometry and spatial sense.

Ann Wakeley, a consultant and early education expert who wrote the curriculum for the project, led the group in an exercise in measurement. It began with a photo projected on a giant screen that showed a boy with his arms around a large ball. “Holding a ball is math,” Wakeley said, “and it’s a BIG BALL, not a little ball,” she added. 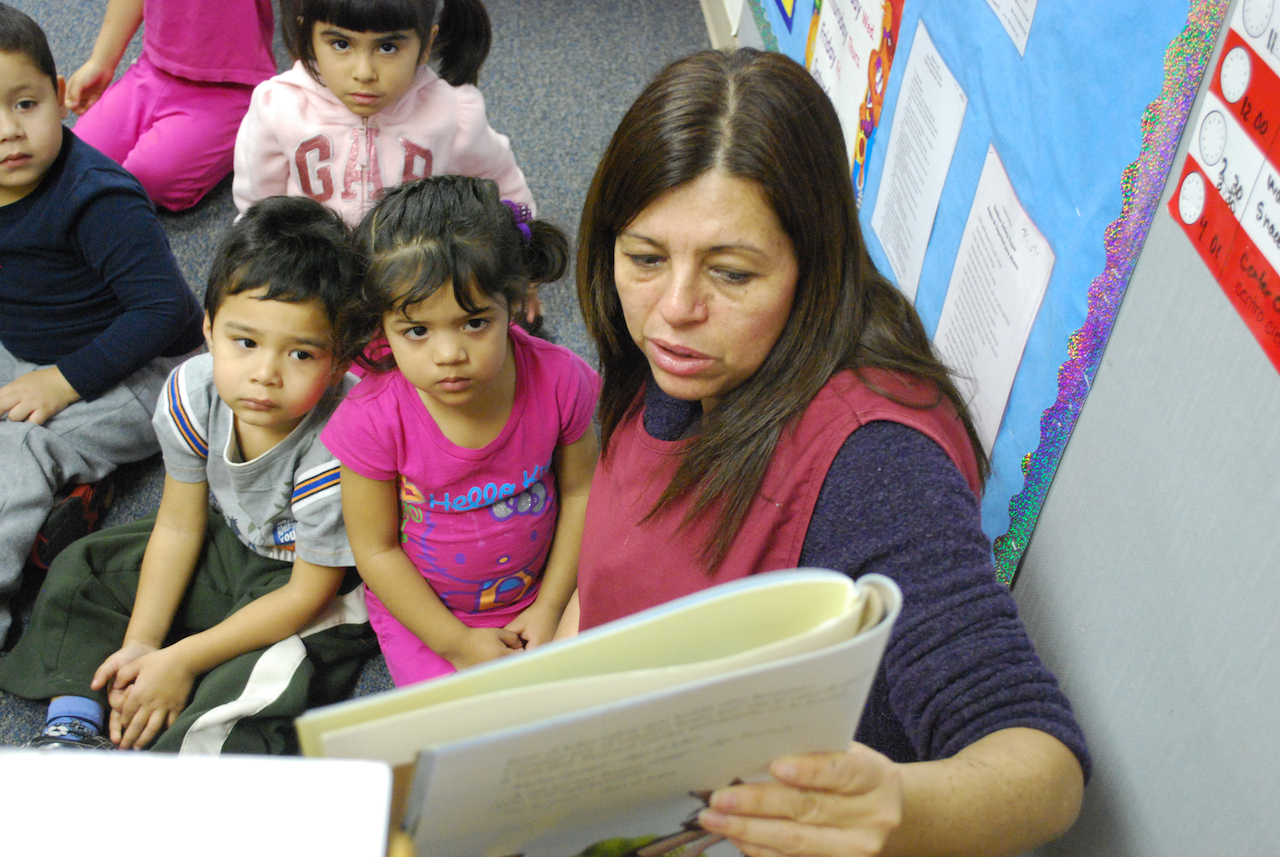 Weighing apples at the market

Another exercise in measurement, aimed at preschoolers, came from the grocery store. In the exercise, a child is asked to lift two bags of apples, one at a time, and judge which one of the bags is heavier. Using a more precise measurement, the child would be encouraged to place each bag, one at a time, on a scale, to find out how many pounds or ounces each bag of apples weighed.

Wakeley also showed her adult audience in the training room a fun example of how non-standard units of measurement can be used in early education.

The example: A teacher traces the sole of her shoe on a piece of butcher paper and cuts it out. The teacher then uses the paper sole to measure her height, which is six soles tall. Children in the class also made cutouts of their soles to measure their height in a nonstandard measurement.

Ristyn Woolley, an education specialist at a Head Start center run by the YMCA in the San Francisco Bay Area, said after the session that Early Math Family Engagement is an ambitious project that is “upping the ante” for Head Start programs by actively involving large number of parents in their children’s learning.

Woolley she is hopeful the project will help more Head Start students in California arrive at school ready to learn. Each Head Start program in the state will tailor the new math program to its needs, and will decide how to implement the math and parent engagement plan, Mockler said.

The early math curriculum being used in California was inspired by the Math at Home curriculum, which changes math from being a homework activity to including it in everyday activities, such as preparing dinner. A parent’s question to their child could include: “What are the ingredients, and what do they have in common?”

One goal of the Head Start program is getting young children to think critically and solve problems – which are also two principles of the Common Core State Standards.

“I am pleased that Common Core is out there,” Keeley-Saldana added, “because it’s much more aligned with what we have been teaching in preschools.”

Darden needed no encouragement to become a parent volunteer at her girl’s school. “I asked, ‘What can I do to help out?’,” she said. Since then, she has encouraged other parents to learn what their children are doing in school and do that at home, too.

Her greatest satisfaction is knowing that her daughter is learning how to figure things out. “That really makes me happy,” Darden said. “That is the biggest reward.”

Editor’s note: EdSource Today’s coverage of early education is supported by the Heising-Simons Foundation. EdSource maintains sole editorial control over the content of its coverage.