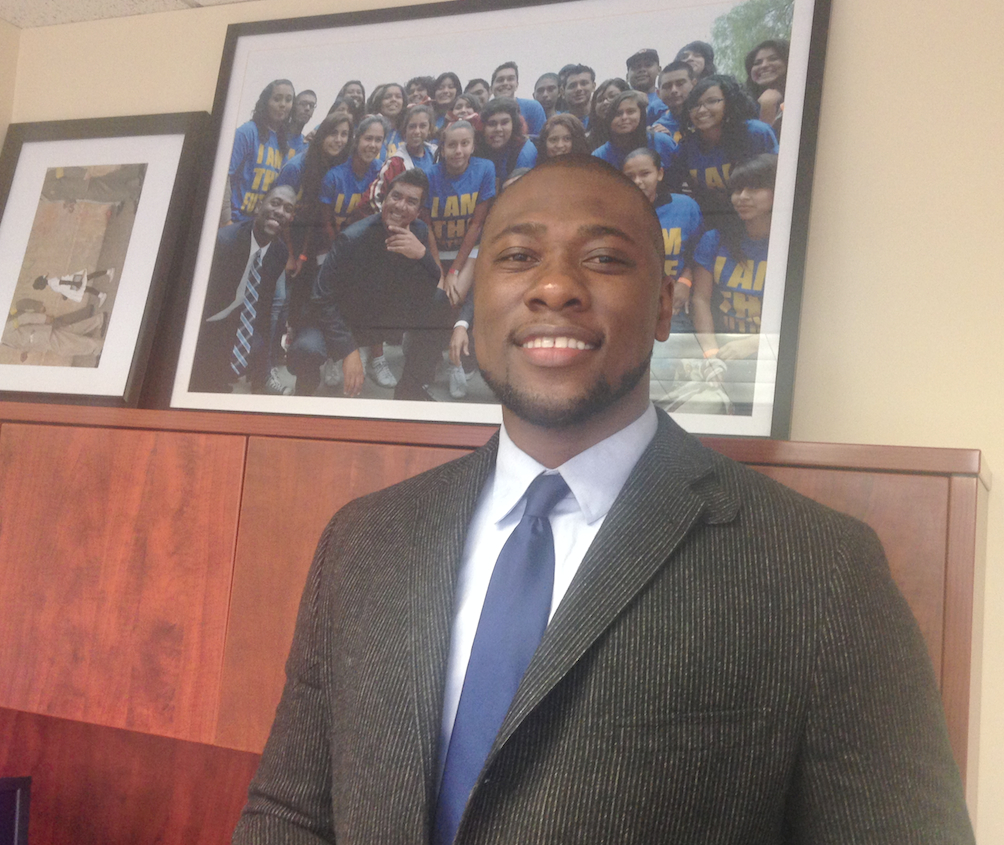 Credit: John Fensterwald/EdSource Today
Ryan Smith, executive director of Education Trust-West, at his office in Oakland. Behind him is a photo of him with comedian George Lopez and students at Roosevelt High in Los Angeles, whose I Am The Future campaign focused on raising graduation rates.

Credit: John Fensterwald/EdSource Today
Ryan Smith, executive director of Education Trust-West, at his office in Oakland. Behind him is a photo of him with comedian George Lopez and students at Roosevelt High in Los Angeles, whose I Am The Future campaign focused on raising graduation rates.

Ryan Smith got an early lesson in the inequities of education in California when, as a 6-year-old, his single mother used her savings to move from low-income South Los Angeles to nearby Culver City in 1987 so that her only child could attend better schools.

“It was 10 miles away. As far as income was concerned, it was a world away,” said Smith, who last month was named executive director of Education Trust-West, a nonprofit based in Oakland that works to narrow the achievement gap in education.

“Part of the reason I do this work is that I am grateful for her sacrifice,” Smith said in a recent interview with EdSource. “Part of it is my indignation that anyone would have to spend her life savings to send her son to a good school.”

Education Trust-West works to draw attention to disparities among California’s school districts, highlighting the best practices of districts that excel in educating minority and poor students and pushing for policy changes in Sacramento. That mission will continue, Smith said.

The skill he brings to the job, he said, is building coalitions of parent and student groups to make sure their voices and interests are reflected in the actions of the State Board of Education and the Legislature.

Smith, 33, arrived at Ed Trust-West after directing education programs and policy for the United Way of Greater Los Angeles. He also coordinated the effort of a Los Angeles coalition of civil rights, education and community advocacy groups – known as Communities for Los Angeles Student Success, or CLASS – to use the state’s new K-12 local funding law to improve achievement for minority and low-income students.

He succeeds Arun Ramanathan, who steered Ed Trust-West’s work on the Common Core State Standards, which have been adopted by California and 42 other states, and the state’s Local Control Funding Formula. Ramanathan now works as chief executive director of Pivot Learning Partners, a nonprofit education consulting organization in San Francisco.

After graduating from Culver City High, Smith enrolled in UCLA in 1999. Three years earlier, California voters had approved Proposition 209, an initiative that banned affirmative action in the state’s public universities. He was one of only 27 African-American males in a class of 5,000 students at UCLA. The problem, Smith said, was not just Prop. 209 but improving schools so that more low-income students of color qualified for the University of California and California State University.

“Most parents are not reading our executive summaries or the full reports. How do we get that information to parents and organizations that work with students in a form that speaks to them?” – Ryan Smith, executive director, Education Trust-West

During a summer program for minority students before his freshman year, an academic officer said to the group, “Look to your left and your right. Many of you won’t be here four years from now,” Smith recalled. The message was intended to drive home the point of working hard. Instead, Smith said, it was a dispiriting reminder of “how hard the journey is for black, brown and poor children. We were considered the students of color competitive enough for an institution like UCLA but were being told that we may not graduate.”

Smith graduated from UCLA and worked as a researcher for the Los Angeles Times editorial board. After that, he was hired by Green Dot Public Schools, a charter schools network located in some of Los Angeles’ most challenged neighborhoods. His job was to work with parents on how to support their children academically.

He then used his fluency in Spanish to organize parents at the Partnership for Los Angeles Schools, the organization that former Los Angeles Mayor Antonio Villaraigosa created to turn around 16 low-performing schools. During Smith’s five years there, he created Family Action Teams – a committee at each school that consisted of parents, teachers and an administrator that met monthly to create strategies for parent involvement.

Smith also established Parent College, which included sessions in the 3 R’s – rights, roles and responsibilities for parents in education. Four thousand parents graduated from the program, he said, including many who never had finished any school.

“They were – and still are – incredibly proud to complete the program, he said. “Some have been inspired to go back to school to inspire their children to continue.”

“We can do a better job” empowering parents and students “to act for themselves so that policy follows the will of the people,” Smith said. “I started out as an organizer and saw the gap between what happens in a community and what happens in Sacramento.”

Still, getting information about state policies to parents and bringing parents’ voices to Sacramento are ongoing challenges, Smith said. “Most parents are not reading our executive summaries or the full reports,” he added. “How do we get that information to parents and organizations that work with students in a form that speaks to them?”

Ed Trust-West has done innovative work. Its LCAP Watch makes it easy to find and compare districts’ Local Control and Accountability Plans, the three-year improvement plans, updated annually, that districts create under the new state funding formula. Before the state began releasing revenue estimates for districts under the formula, Ed Trust-West published a district calculator that enabled parents to do their own revenue estimates.

Smith said he plans to use social media and connections with other grassroots organizations to share Ed Trust-West’s research and build a larger base to push for change. Ed Trust-West’s policy priorities will continue to be parent engagement, which is a state priority under the Local Control Funding Formula, and the achievement of English learners – the subject of a recent Ed Trust-West report.

In the past year, a lawsuit challenging state laws on teacher tenure, dismissals and layoffs by seniority has consumed much of the debate over education in California. Marshall Tuck, Smith’s former boss at Green Dot and the Partnerships schools, made the lawsuit, Vergara v. California, a focus of his unsuccessful campaign for state superintendent. Ramanathan, Smith’s predecessor at Ed Trust-West, testified as a witness for students who filed the lawsuit.

But Smith talks about a “third way in education” that avoids getting drawn into the polarizing fight between teachers unions and reformers who concentrate on the issues in Vergara. The real interests of the “disenfranchised communities that we care about – students of color and poor students,” he said, get lost in the power struggle.

He is looking for common areas to unite students, parents and teachers, he said.

“We can do a better job” helping parents and students “to act for themselves so that policy follows the will of the people,” he said. “I started out as an organizer and saw the gap between what happens in a community and what happens in Sacramento.”