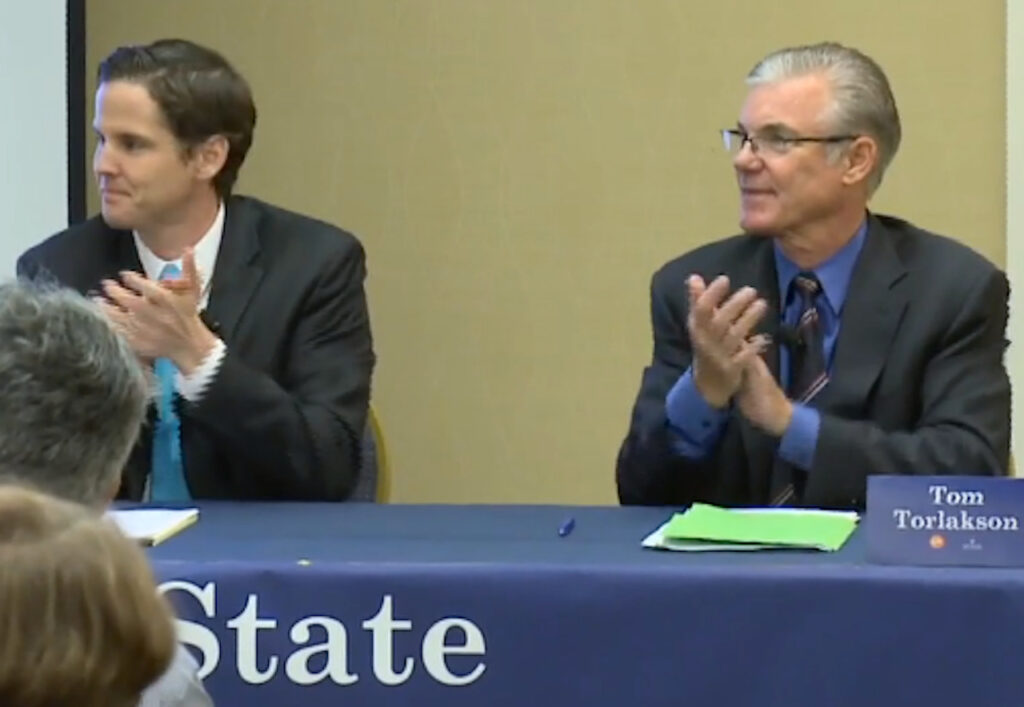 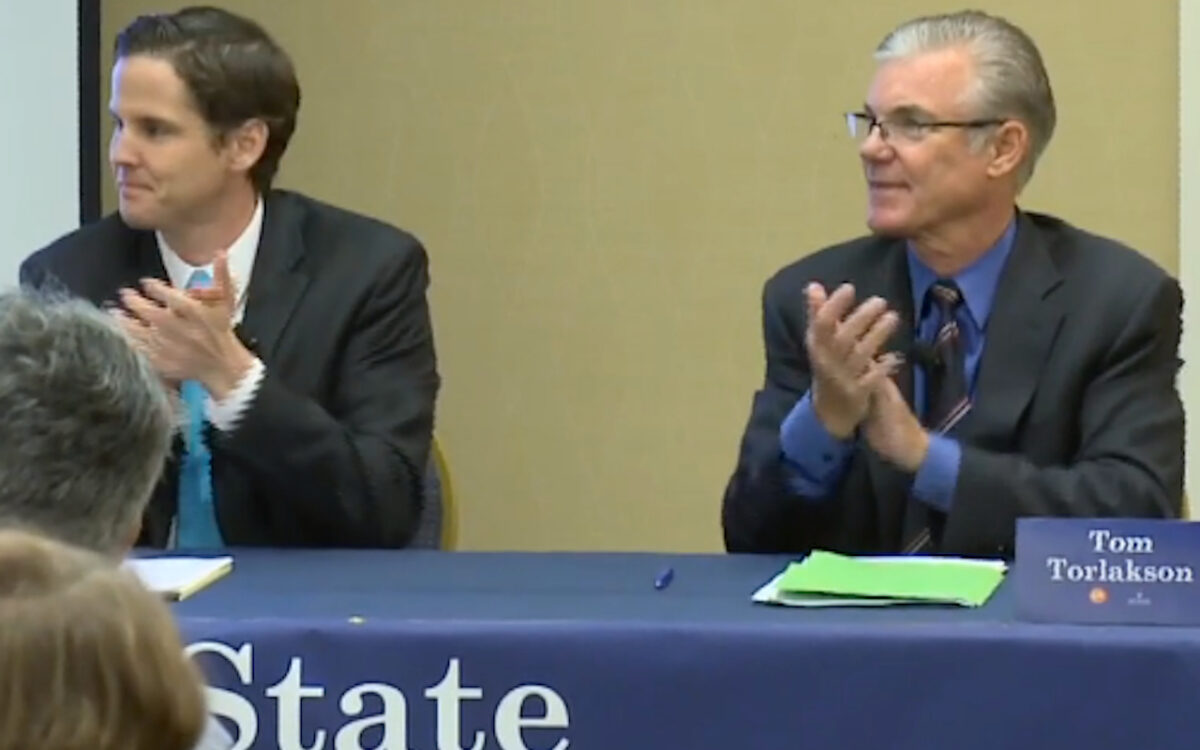 Credit: Video of the event by Educate Our State.
Tuck, left, and Torlakson applaud the audience after their debate in Burlingame, co-sponsored by the nonpartisan parents organization Educate Our State and the Santa Clara County Office of Education on Sept. 27.

Credit: Video of the event by Educate Our State.
Tuck, left, and Torlakson applaud the audience after their debate in Burlingame, co-sponsored by the nonpartisan parents organization Educate Our State and the Santa Clara County Office of Education on Sept. 27.

Independent groups backing the two candidates for state superintendent of public instruction reloaded their campaigns with millions of dollars in contributions this week, as the race heads toward Nov. 4 with a crescendo of spending.

Nine wealthy backers of Marshall Tuck – led by $1 million donations each from William Bloomfield of Manhattan Beach and Eli Broad, a longtime funder of reform efforts in Los Angeles – seeded a new independent expenditure committee with $4 million. That brought outside fundraising for Tuck nearly even with outside fundraising by the California Teachers Association, the biggest financial backer of Supt. Tom Torlakson. The CTA contributed an additional $1.4 million this week to the $5.7 million it has already contributed to Torlakson. The new donations, as of Oct. 10, will push expected spending by groups not affiliated with the candidates to about $14 million, split about 40 percent for Tuck and 60 percent for Torlakson.

The two candidates themselves have raised about $4.4 million in direct contributions as of Oct. 10, mirroring in campaign funding what a recent Field poll suggests is a hotly contested race, with many voters still undecided. That combined total is already more than twice the total raised by the candidates in the 2010 election, in which Torlakson defeated a retired school district superintendent, Larry Aceves. As of the latest campaign finance disclosure period, which ended Sept. 30, Torlakson had about $608,000 left in the bank, while Tuck had close to $700,000.

The new donations, as of Oct. 10, will push expected spending by groups not affiliated with the candidates to about $14 million, split about 40 percent for Tuck and 60 percent for Torlakson.

Candidates are limited in how much money they can receive in direct contributions from donors. Individuals are allowed to contribute up to $6,800 for a primary election and another $6,800 for a general election. All other donors, such as political action committees and businesses, are capped at $13,600 per primary election, and the same amount for a general election.

There are no contribution limits on donors who give to independent expenditure committees, which by law cannot be affiliated with the candidates in an election, and that’s where the bulk of giving is going.

Parents and Teachers for Tuck For State Superintendent of Public Instruction 2014 is the new committee that Tuck backers created this week; most of the donors had contributed to Tuck through other independent expenditure committees in the primary election. The nine initial donors to the committee and their contributions as of Oct. 10 are:

Before this week’s infusion of cash, Tuck benefited from $1.7 million in outside spending from California Senior Advocates League, a committee funded largely by Bloomfield, Broad and the Continental Development Corp., and the independent committee Women for Good Government. The California Senior Advocates League spent about $1 million supporting Tuck through robo calls, ad buys and and mailers. Bloomfield, who formed his own personal independent expenditure committee, spent close to $900,000 supporting Tuck, mainly through slate mailers.

The California Teachers Association has spent about $5.7 million: $1.7 million on ads and other spending supporting Torlakson and opposing Tuck and $4 million on issue advocacy ads supporting Torlakson but not expressly calling for his election. An example is this ad endorsing Torlakson’s Blueprint for Great Schools. This week’s $1.4 million contribution went to “Torlakson for Superintendent: Major Funding by CTA,” which, as of Sept. 30, spent $1.4 million supporting Torlakson through mailers, radio ad buys and other activities, and $1.2 million opposing Tuck, mainly through radio ad buys. The committee has raised the most of any fundraising committee involved in a statewide race so far this election, according to the Fair Political Practices Commission website.

The California Democratic Party also reported this week spending $241,000 on postage and printing in independent spending for Torlakson.

Asked about his candidate’s support from the CTA, Paul Hefner, spokesman for the Torlakson campaign, wrote in an email, “Tom bases his decisions upon what’s best for kids. He is proud to be supported by the classroom teachers who have made the education of California’s children their life’s work, but he is beholden to no one.” He dismissed the independent expenditure committee for Tuck as being “bankrolled by people who opposed investing in public schools.”

Asked about her candidate’s support from wealthy donors, Cynara Lilly, spokeswoman for Tuck, wrote in an email, “From day one, Marshall has been running to be an independent voice – representing parents and kids. Simply put, the situation – Tom’s money from CTA and Marshall’s support – are not analogous. It’s understandable that CTA is spending big for Tom Torlakson – he’s been in lockstep with them for decades.”

Tom Torlakson’s campaign contributions/expenditures, as reported to Secretary of State

Marshall Tuck’s campaign contributions/expenditures, as reported to Secretary of State

EdSource today coverage of the candidates’ debate in Burlingame, Sept. 27, 2014

Separate from independent expenditure groups, Torlakson has been raising money for his re-election since 2011, putting him slightly ahead of Tuck in fundraising. Torlakson has raised about $2.4 million in contributions to his campaign so far. But Tuck has outraised Torlakson by $161,000 in direct contributions in the three-month reporting period that ended Sept. 30. He raised $780,000 in cash and non-monetary contributions, to Torlakson’s $619,000. Over the past week, Tuck raised an additional $168,000, while Torlakson’s campaign added $110,000 in donations of $1,000 or more, according to the political website Around the Capitol.

Unions, particularly trade and teachers unions, have dug deeply into their pockets, giving Torlakson about $1 million in direct contributions while Tuck has received no union contributions. About $100,000 of Torlakson’s money came from various political action committees and locals of the International Brotherhood of Electrical Workers and the United Association of Journeymen and Apprentices of the Plumbing and Pipe Fitting Industry.

Other unions that gave include the American Federation of Teachers; the California School Employees Association, representing non-certificated school employees such as bus drivers and classroom aides; and the Peace Officers Research Association of California. Torlakson also raised about $80,000 from 32 campaign committees of other politicians, including outgoing California Senate President pro Tem Darrell Steinberg, California Sen. Mark DeSaulnier, and Fresno County Board of Supervisors candidate Blong Xiong.

Tuck, former CEO of the Partnership for Los Angeles Schools, started fundraising in August 2013 but has managed to keep pace with Torlakson, raising $2.2 million since then. Tuck has also received about 500 more contributions than Torlakson. While Tuck has not received money from unions or other candidates, he has received more than $500,000 from individuals who identify themselves as retired, homemakers, or not employed.

Tuck received close to $40,000 in individual donations from employees of Acre Investment Company, LLC, a San Francisco-based investment firm. He also received the maximum donations of $6,800 each from Eli and Edythe Broad, and Stephen and Susan Chamberlin, founders of the Chamberlin Family Foundation, which focuses on education reform in California. Prominent charter school advocates who have given maximum amounts to Tuck include  Arthur Rock and former New York City Mayor Michael Bloomberg.

Dan Schnur, executive director of the Jesse M. Unruh Institute of Politics at the University of Southern California, said that in the absence of other highly competitive statewide races, “the opportunity exists for this campaign to move center stage. Both campaigns will have enough money for some statewide advertising, and will also attract more news coverage.”

The amount of money pouring into the race itself may become a big issue, Schnur added. “The irony is that you have two smart candidates with two legitimate schools of thought on policy,” he said. But it may come down to perception: “whether voters are more suspicious of wealthy individuals trying to buy the race for one candidate or wealthy unions trying to buy it for the other.”

** Correction: An earlier version identified Eli Broad as CEO of SunAmerica. He sold the company and retired as CEO in 2000.