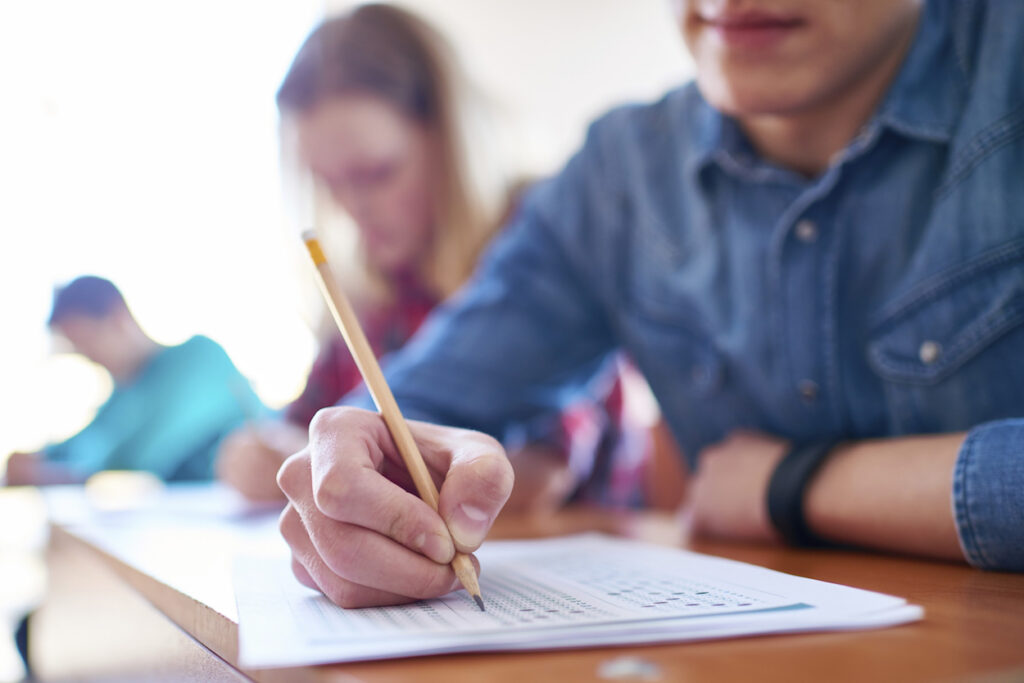 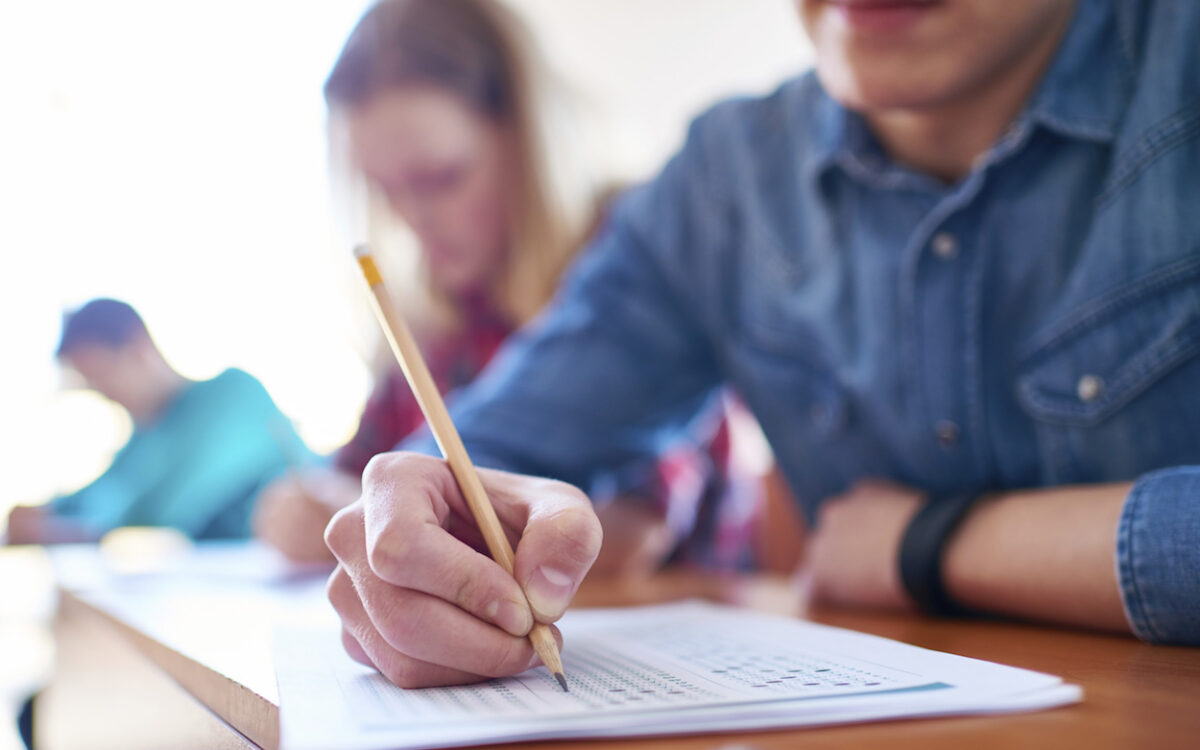 Gov. Jerry Brown has said he will sign Assembly Bill 484, which, as EdSource Today has reported, would suspend the current California Standards Tests in English language arts and math for grades 3 to 8 and 11. In its place, schools could give students a practice exam aligned to the new Common Core standards currently under development.

AB 484 makes no mention of the high school exit exam, called CAHSEE. The California Department of Education also hasn’t yet addressed the test’s future, other than to say that the exam will be administered to the class of 2014 and, possibly, beyond, even though the questions will still be pegged to the state standards being replaced by Common Core.

Not just CAHSEE, but the entire state assessment system is in transition. In a January 2013 report, State Superintendent of Public Instruction Tom Torlakson described, in detail, all the tests that will need to be developed in every subject and for all students, including English learners and those with special needs, to align with the Common Core State Standards, a national set of educational standards that have been adopted by 45 states.

“I think that there will be changes to the entire landscape of assessments in California,” said Assemblywoman Susan Bonilla, D-Concord, author of AB 484. “Included in that entire plan will be the high school exit exam.”

Bonilla said the Department of Education will develop proposals for the revamped testing and assessment system over the next few years following an extensive public process. In the interim, academic help for students having difficulty passing the exit exam is dwindling.

With a few relapses along the way, scores on CAHSEE have increased since 2006, the first year that it counted toward graduation; the exam was field tested beginning in 2001 and was supposed to become a graduation requirement for the class of 2004, but lawsuits delayed the start.

The class of 2013 had the highest success rate to date, with 425,911 students – or 95.5 percent – passing both the math and English language arts sections of the test. The 4.5 percent who didn’t pass add up to slightly more than 20,000 students who didn’t receive diplomas.

Legislators established a California exit exam in 1999 when they approved SBX1 2 with overwhelming bipartisan support. The bill, by former State Sen. Jack O’Connell, D-Santa Barbara, who voters later elected as state superintendent of public instruction, mandates that students pass a two-part proficiency test in mathematics and English language arts, by the end of 12th grade as a requirement for graduation. They have multiple opportunities to take the exam, starting in 10th grade and continuing for two years after their senior year in high school; once students pass a section, either math or English, they don’t have to take that part again.

Until 2009, school districts were required to provide additional instruction for students who had not passed the test by the end of 12th grade, by letting them remain in school for a fifth year or through a special CAHSEE tutoring class. This was required under Assembly Bill 347, introduced in 2007 by former Assemblyman Pedro Nava, D-Santa Barbara. The bill settled Valenzuela v. O’Connell, a class action lawsuit filed in February 2006 against the State Board of Education and then- state Superintendent O’Connell, alleging that some students, especially those in low-income districts, were not receiving an equal opportunity to learn the material included on the test.

The settlement was essentially upended in 2009, when the state gave districts more flexibility to spend previously earmarked “categorical” funds in any way they wished. The change eliminated mandated spending on two programs that funded CAHSEE interventions, one for summer school and the other for intensive instruction during the academic year. A majority of districts have since used the money earmarked for the exit exam intervention for different programs, according to a 2011 survey by the Legislative Analyst’s Office.

In Sacramento County, for instance, only two districts – out of nine with high schools – are still offering the supplemental instruction for students, said Sherry Arnold, who monitors CAHSEE intervention at the Sacramento County Office of Education.

“In the beginning, every high school district took the money and observed the regulations,” Arnold said. Some of the seven districts may still provide services, but since they flexed the funds, they no longer have to report to her office how they spend the money.

Students in the middle

Most of the students who don’t pass the exit exam are in special education programs or are English learners, like Cyndia Velarde, who was in the class of 2013 at James Lick High School in San Jose. She arrived in California from Guadalajara, Mexico, during middle school. Although she still has difficulty with English, Velarde passed all her classes and said she did well on all the CAHSEE practice tests, so she was shocked when she couldn’t pass the real thing. Velarde said she took the test about six times between her sophomore and senior years, but in the end she couldn’t graduate with her classmates.

Instead, she went to graduation as a visitor to see her friends, and left depressed. Velarde said she’s dreamed of getting a high school diploma since coming to the United States. She asked her high school counselor if she could stay for a fifth year, but somehow that never worked out. She doesn’t want to stop trying to pass but doesn’t know how to proceed. She had never heard about adult education or community college classes solely to help students pass the test.

A high school degree is important, she said. “If I have that I will feel more proud and will be able to get a job.”

High school diplomas increase earnings by thousands of dollars. In California, employees with diplomas earn a median annual salary of $27,485, according to the U.S. Census Bureau. That’s nearly $9,000 more than workers who never graduated from high school. They’re also less likely to be unemployed.

Velarde’s case is “exactly the type of situation (the Valenzuela case) was designed to address,” said attorney Brooks Allen with the ACLU of Southern California.

Allen says he can’t understand why the state would allow districts to back away from intervention programs while still requiring students to pass the test. “How can you really be denying this really critical lifeline for so many students?” he asked.

It’s not clear how many students are affected by the declining resources for CAHSEE. The Human Resources Research Organization, a 60-year-old research and consulting firm, known as HumRRO, has been contracted by the state to evaluate the exam since it was first developed, and even researchers there don’t have all the numbers.

“It’s been a little frustrating that we haven’t been able to get very good data,” said Lauress Wise, HumRRO’s principal research scientist, who has been analyzing the state’s exam data for a dozen years.

Wise said that of the 20,000 or so students in the class of 2013 who didn’t pass the exam last year, no one knows how many of them have met all other requirements for graduation or how many of them would not have graduated anyway because they didn’t have enough credits. HumRRO estimates that about half the students do keep trying to pass the test after their senior year, but how many pass is another unknown because the student database, the California Longitudinal Pupil Achievement Data System (CALPADS) can’t track kids once they leave school. The unique student identifier given to each student by the data system isn’t used by colleges or the Employment Development Department; like most official agencies, they use Social Security numbers.

Researchers do know that by the time students are in high school, it may be too late to do much to help them pass the exit exam, especially for disadvantaged students. Reviews of middle schools that collaborate with high schools have found that “they do a little better at closing the gaps on CAHSEE for minority students,” Wise said. HumRRO is conducting more research into successful middle school programs this fall. Studies by the Public Policy Institute of California determined that students in fourth grade who are English learners are already at a slight disadvantage for passing the high school exit exam.

That still leaves open the question of what to do about the test in the next few years. Although there have been no formal discussions, some ideas under loose consideration include scrapping the test and using the Smarter Balanced tests being developed for the Common Core standards, said State Board of Education President Michael Kirst. Because the new assessments are computer adaptive, meaning that the level of difficulty of the questions changes based on a student’s previous answer, the test could possibly be set to a level that is commensurate with the current exit exam.

That may not be as easy as it seems, said Richard Duran, a member of the state department of education’s technical advisory group working on CAHSEE and an education professor at UC Santa Barbara. The new computer adaptive tests haven’t even been field tested yet. “We have to give that a chance to see how it operates,” Duran said.

The ultimate decision will be based on policy, not technology, Duran said.

“The real matter is how is state policy going to address the meaning of the high school diploma,” he said. “I think it’s a good time to ask these questions and I think it’s a very confusing time.”

Deregulating School Aid in California: How 10 Districts Responded to Fiscal Flexibility, 2009-2010, Rand Corporation and Policy Analysis for California Education, May 2011

Links to all the HumRRO independent evaluations of the California High School Exit Exam, California Department of Education