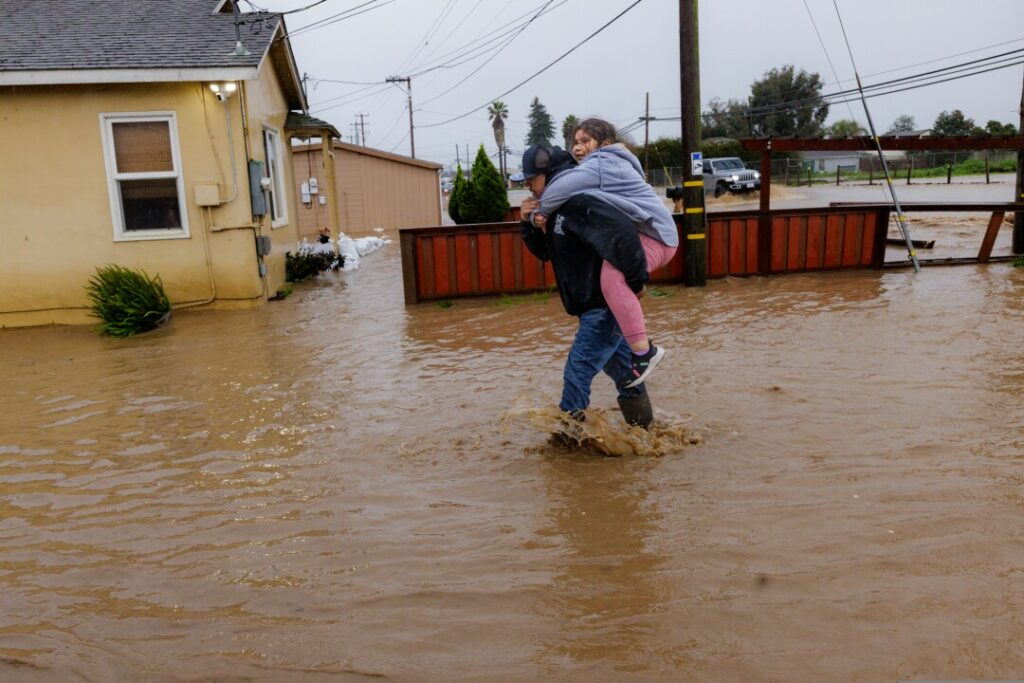 A succession of significant storms downed trees and overflowed waterways, causing the closure of hundreds of California schools Monday, postponing the return to school from winter break for many students and sending others home midday.

Although the rains slowed in some parts of the state as the day progressed, the Central Coast and other areas of the state were hit with strong winds and heavy rainfall, prompting evacuation orders as streams, creeks and rivers, already at capacity from a week of storms, started to crest.

Much of Santa Cruz County also was evacuated, shutting down roadways and closing multiple campuses.

Parts of Monterey County were evacuated because of rapidly rising water levels in local waterways. All major rivers in Monterey County are expected to be at flood stage by 9 p.m. or sooner, said Brett McFadden, deputy superintendent at the Monterey County Office of Education on Monday.

Seven of the county’s school districts were closed Monday, including Carmel Unified School District, which has a school and its district office in an evacuation area. Despite this, most of the county’s schools are open, with damage limited to fallen trees, pooling water, leaking roofs and power outages, McFadden said.

“We make decisions on closing schools on an hourly basis,” he said. “We have recommended that all LEAs (local education agencies) assess conditions and continue to monitor things and make decisions tomorrow.”

When deciding whether to open a school during a storm, the first consideration is the safety of staff and students as they travel to and from school, and while on district campuses, McFadden said.

Most county offices of education have designated staff who are briefed at least daily at their county’s emergency operation center.

McFadden joined safety coordinator Nicholas Zafiratos, the program coordinator for the Safe Schools for All Program at the Monterey County Office of Education, at the county emergency response headquarters this week because of the high risk of flooding in the county. He expected briefings to continue through the night Monday.

Marin and San Luis Obispo counties also had some closed school districts Monday, with many remaining closed on Tuesday.

Not all the school closures were on the coast. School districts in Nevada, Sacramento, Madera and San Joaquin counties also reported closing campuses Monday.

Sacramento City Unified School District closed all of its schools Monday as a precautionary measure but reopened most campuses Tuesday. It wasn’t clear whether five schools that were without power Monday would reopen Tuesday. The area remained under a flood watch.

College campuses were not immune from closures. Students, faculty, staff and livestock were evacuated from some Cal Poly San Luis Obispo’s agriculture facilities Monday afternoon because of an impending breach at Shepard Reservoir. There is no imminent threat to the main campus, according to the university.

UC Santa Cruz lost power to some of its buildings Monday and will continue with online instruction until Wednesday, according to the university. San Joaquin Delta College in Stockton was also closed Monday as a precautionary measure.

Because of the changing nature of weather, decisions to close schools are often made at the last minute. It was 7:30 a.m. on Monday before Del Norte Unified families were notified that power had been restored at all district schools and that schools would be open.

Cotati-Rohnert Park Unified School Districts officials decided to close at 7 a.m. Monday because of potential flash floods, according to Eric Wittmershaus, spokesman for the Sonoma County Office of Education.

Four other districts in the county also were closed, although 35 were open, according to Wittmershaus. Most of the impacted schools are in rural areas in the western part of the county that either have lost power or have had their roads closed by falling trees.

Horicon Elementary School District remains closed after the school ran out of propane for the generators that were powering the school after it lost electricity last week. Access to the school had also been blocked because trees fell over the only road leading to it, Wittmershaus said.

Guerneville School District remains closed because of concerns about potential flooding from the Russian River and other nearby waterways. The district was closed Thursday after forecasts that the river would crest that day.

“Generally, the issue hasn’t been damage to the actual school buildings but to the infrastructure to the areas around them,” said Wittmershaus of county schools.

Heavy rain is expected to continue through Wednesday in much of the state, increasing the potential for flooding and continued school closures.

Tahoe-Truckee Unified School District in Nevada County canceled classes Monday and Tuesday because of the weather, which included heavy snowfall. The Truckee area is under a winter storm warning until 4 p.m. Wednesday.

Rio Dell School District in Humboldt was closed for other reasons. It planned to reopen schools Tuesday after closing on Dec. 20 after a 6.4-magnitude earthquake struck the community. A 5.4-magnitude aftershock on Jan. 1 added to the damage at the district’s two schools — Eagle Prairie Elementary and Monument Middle. Contractors and structural engineers assessed the damage and have cleared the classrooms for occupancy.

“The earthquakes have had a significant impact on RDSD families and staff, with at least 15 families losing their homes or experiencing home damage and eight staff and board members affected,” according to a news release from the Humboldt County Office of Education.

Staff returned to school Monday for training that included how to assist students and families who need resources after the earthquake.

Students also returned to Sunol Glen School in Alameda County on Monday after heavy rainfall on Dec. 31 flooded their campus and damaged three classrooms and destroyed their garden, athletic track and playground. Community volunteers, school staff and a restoration management company worked to prepare the campus for students returning from winter break. Last week, Superintendent Molleen Barnes said the classrooms that had been in the portables would be moved into the cafeteria and students would have lunch in the library.

“It was a bit hairy, as three of the four access roads to our school were closed due to the roadways being flooded,” she said. “With only one road open, we have 95% of my staff here and 75% of my students present.  I am incredibly relieved and grateful.  Of course, safety is the Bo. 1 priority; however, I strongly believe — and the pandemic illustrated this — students need to be in school if at all possible.”