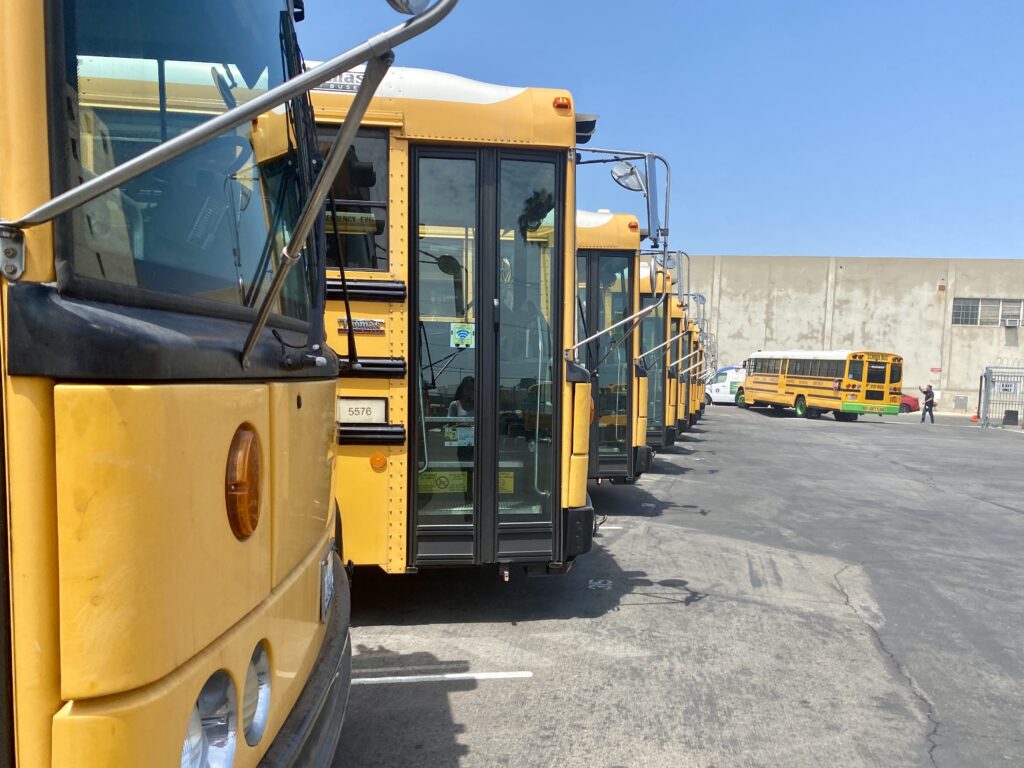 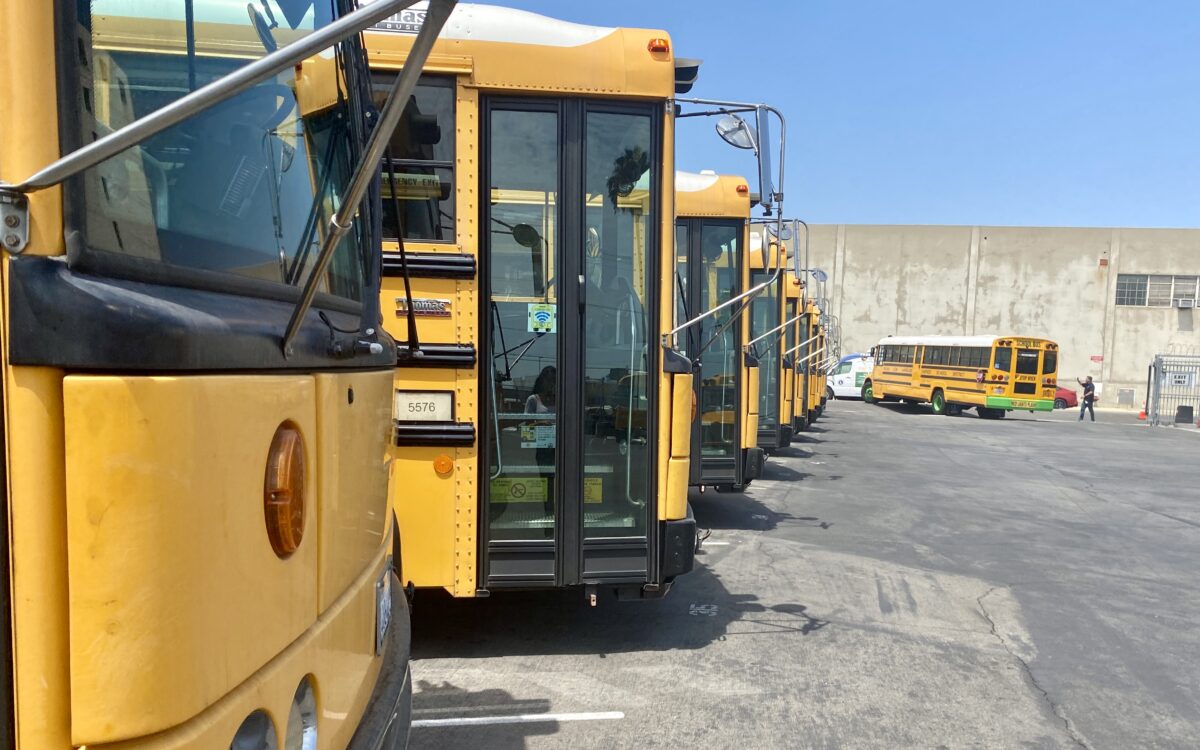 KATE SEQUEIRA/EDSOURCE
LAUSD labeled September as Child Welfare and Attendance Month as part of the effort to reduce chronic absenteeism.

KATE SEQUEIRA/EDSOURCE
LAUSD labeled September as Child Welfare and Attendance Month as part of the effort to reduce chronic absenteeism.

For eighth grader Cloud Mejia, this school year feels like a reset.

He’s slowly gotten back into his daily school routine after a year of chronic absence. It’s been a period of adjustment for him as he’s gone from missing two days the first week of school to one the second to finishing a complete week during the third. He’s missed a few additional days recently too, but now he’s on track to meet his attendance goals early.

“It’s been way better,” Cloud’s mom, Aimee Mejia, said. “I mean, less anxiety for both of us now that Cloud is going. That really helps a lot.”

Right now, Cloud has a goal to hit 15 days of attendance between the first day of school and the end of October, which his family worked out with his pupil services and attendance counselor at South Gate’s Southeast Middle School. The goal is based on the number of school days he missed last year due to anxiety and depression as a result of Covid-19 and bullying. According to Aimee, he’s reached that goal.

Cloud isn’t alone in his struggle with attendance. He’s one of thousands of students who have been chronically absent from Los Angeles Unified schools. LAUSD estimates that between 10,000 and 20,000 students are “missing” as the district continues to navigate the impact of the pandemic. The district has pushed attendance heavily as it embarks on what it has labeled a more normal year as its focus has shifted away from Covid-19.

Half of all students were chronically absent last year, meaning that they missed 15 or more days of school. Not including those quarantined because of Covid-19, the figure was still at nearly 30%. According to the attendance analysis, many of those absences have been attributed to a variety of health, family and social factors, including illnesses, mental health issues, family needs and disconnection from school.

“We cannot teach the absent child,” Superintendent Alberto Carvalho said during a news conference on the first day of school. “As we said, we have a lot of lost kids in Los Angeles.”

Carvalho has warned several times that once statewide test scores are released, they will reflect “significant declines” in achievement. Those results won’t include the state of chronically absent students who weren’t present to take the tests.

There’s still a long road ahead for the district as it works to bring students back into the classroom. Attendance peaked the first week of school at 93%, but a re-engagement plan from May notes that aside from those chronically absent, some have also withdrawn from the district, with their whereabouts unknown. The district also continues to come across students who are not on its outreach lists, including several when Carvalho conducted home visits prior to the first day of school.

“We came to two sites looking for two or three kids. We found two or three other kids that were not on the list,” Carvalho said that day. “That’s why it’s 10 (thousand) to 20,000. Could be more.”

That’s something that Ofelia Ryan has seen firsthand as a pupil services and attendance counselor at three schools within the district and as president of the Association of Pupil Services and Attendance Counselors. She said that, especially for those bordering on chronic absenteeism, families sometimes don’t realize how many missed days have accumulated over the year.

“I find few cases when the parent really doesn’t believe that school is something important,” Ryan said. She also attributes some chronic absences she’s seen over her 20 years as an attendance counselor to extended vacations.

As a pupil services and attendance counselor, one of her jobs is to work with the families of chronically absent students to reconnect them with their schools and offer support and resources to remove obstacles that might be getting in the way. That can range from addressing technology needs to providing referrals to outside services and is done in part by attempting to connect with families by phone, by email or in person through home visits.

She said it takes time to establish a relationship and trust with a family and takes effort from teachers and administrators as well, especially for counselors like her that don’t work a full five days at any one school.

Since the pandemic hit, Ryan says there’s been a growing focus on the role of pupil services and attendance counselors at school sites. The position has gone from a largely invisible one to one in high demand as LAUSD pushes to hire more counselors because of the pandemic, she said. Among the three schools Ryan works at, two initially requested three days while the other requested two days for her to work — more days than she could handle in a work week and a situation reflective of the growing demand, she said.

“High schools and middle schools were the only schools who were able to support that full-time PSA counselor,” Ryan said, referring to prior to the pandemic. “But there were schools in the district with huge chronic absenteeism rates without PSA time.”

The growing investment, though, means that that’s changing, she said.

LAUSD has promoted the district’s efforts to conduct home visits over the last few weeks as the school year has gotten into full swing as part of its iAttend LAUSD campaign. The school board also officially acknowledged September as Child Welfare and Attendance Month after a resolution passed in late August.

The Friday before school started, Carvalho visited the homes of five students, including Mejia and Garfield High School sophomore Yordi Luna. It was the push they both said they needed, and sure enough, both have started the school year with fairly consistent attendance.

For Yordi, football has been a big motivating factor to attend school. He switched from Mendez High School last year to Garfield to be a part of its team. Minus a bout of Covid-19 that prevented him from attending the first week of school, he’s been present all the last few weeks, according to his mom, Leydi Luna.

His most recent daily progress report sheet compliments his work habits and the talent he’s shown in science — his favorite subject.

Last year Yordi missed much of the school year out of habit from his previous school routine because of the pandemic. Leydi Luna said it was difficult for her to keep track of his attendance since she would head off to work in the morning, and it would be up to him to take himself to school and make it to his classes. Sometimes he would instead stay home to play video games.

“There was not much I could do. I’d have to go to work; I’m a single mom,” said Leydi Luna, who would also have to take her younger son to school.

Since Yordi switched to Garfield High School last semester, however, his mom has taken him to school as well, which helped his attendance pick up toward the end of the school year. She estimates that he missed nearly 50 days of school.

On Cloud Mejia’s end, he has been permitted to opt out of wearing the Southeast Middle School uniform, which has made returning to school a bit easier now that he feels comfortable wearing clothing he finds better reflects his identity. P.E. accommodations have also lessened Cloud’s anxiety about dressing out, which is what caused him to miss the days he did during the first two weeks of school. He’s only missed four days since then due to anxiety.

LAUSD is continuing its efforts both districtwide and at the school level to bring students back to school as students get deeper into the school year. Attendance is a special focus this year because of efforts directed toward closing achievement gaps.

“We’re not going to leave any of these children behind,” Carvalho said. “It is our moral cause, it is our professional responsibility, it is our duty to ensure that we connect with every one of them and provide them with the quality education they need and they deserve. No excuses.”