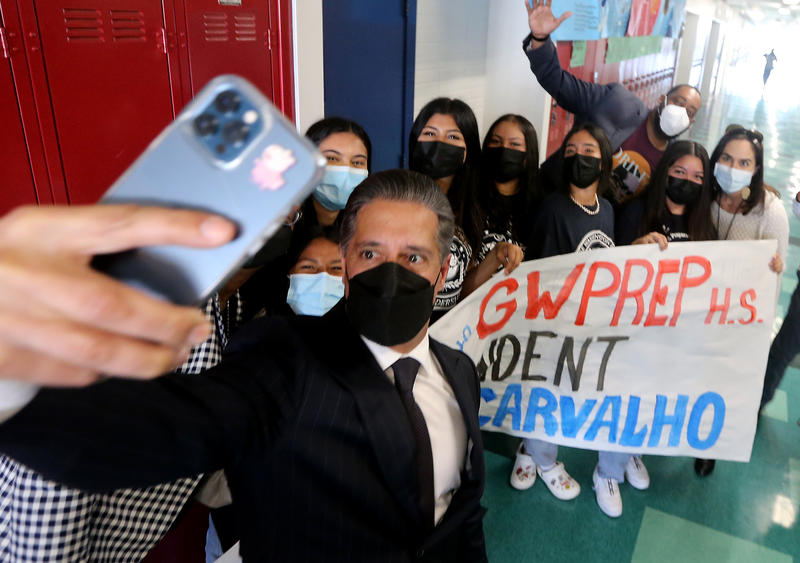 Alberto Carvalho has nearly 80,000 followers on Twitter, his go-to platform.

For Los Angeles Unified Superintendent Alberto Carvalho, social media is like second nature. Sometimes a conversation will trigger an idea or sentiment he finds valuable to the LAUSD community, and he’ll turn to his phone to share his thoughts. Other times, he’ll scroll through posts to find where his voice can help quell confusion or clarify goals.

“I’m meeting them where they are, and they’re meeting me where I am,” Carvalho said. “For me, that’s the power of social media. It can be misinterpreted, it can be misused, but its power is also undeniable.”

That desire to share information comes to him at all times, he said, recalling an April board meeting where the topic at hand encouraged him to slip out his phone and quickly share that he was personally reaching out to a number of chronically absent students to support them and learn about what they’re facing to better combat current attendance issues within the district.

I’m personally taking on 30 chronically absent students at @LASchools as my highest priorities. My colleagues will do the same. Calls, interactions with principals and teachers, review of academic and social and emotional data, knocks at the door, and much more. #iAttendLAUSD pic.twitter.com/sFPXoplsMx

Social media is by no means a new tool for LAUSD, nor is it new to the world of public education, but parents and community members have noticed a difference in how Carvalho chooses to use it — particularly Twitter.

What’s taken some by surprise is his responsiveness both to organizations and individuals who ask him questions or raise concerns on the platform. He’s clarified information on Covid-19 protocols, addressed questions about the timing of decisions and acknowledged parent concerns over potential school changes in his tweets and replies.

“I do appreciate that he is responding to the things that are really hard to address politically, and he’s not shy on that,” said Kristina Wallace, an LAUSD parent who’s begun to spend more time on Twitter since Carvalho joined the district in February. “It’s just a breath of fresh air.”

Although all of what he posts ends up across all of his social media accounts, Carvalho’s taken a liking to Twitter, where he boasts nearly 80,000 followers, because he considers it the more global social media platform and offers the best representation of educators, parents, community groups and other relevant audiences. Though Twitter isn’t as popular as Facebook among U.S. adults, it can be more accessible because of how public the platform is and because of the ability to better curate content, according to San Diego State University’s College of Professional Studies and Fine Arts associate dean Kurt Lindemann, who conducts communication research.

“Twitter now can guide its users toward particular topics and people who are tweeting about the same things that it thinks you might be interested in,” he said. “I think we’re seeing more distinct communities.”

Carvalho’s responses on Twitter have felt direct and free from jargon, said parent group Parents Supporting Teachers co-founder Jenna Schwartz, who’s been encouraged by his online presence. When frustrations arise over a district decision or parents are looking for more clarity over an issue, Schwartz said she directs people to Twitter. There are fewer obstacles there, she finds.

“Parents have long been the ones with the fewest ways to access somebody like the superintendent,” Schwartz said. “With an email, you never know, it’s likely the team that’s getting these emails, right? It’s not direct. But with Twitter, you know he’s looking at it whether he responds or not.”

What first caught many parents’ attention was when Carvalho spoke out in January prior to assuming the superintendent position about Orville Wright Middle School in Westchester. The school community had only recently found out that the school was to potentially move to another campus, leaving its current one to a charter school. Parents were frustrated about the lack of communication about the issue coming from the district.

“That was heartening,” Wallace said, acknowledging that it was one of the moments that stood out to her as an LAUSD parent active on the issue. “Just the fact that he’s acknowledging he knows about the situation and he’s engaging with it. … Before he even came here, he understood that this was something he was going to have to address.”

I will always respect the voice of the community, it’s history, and its best interests. This issue will be thoroughly reviewed. #savewrightmsu

Carvalho said his social media is a balance of his own voice and that of the district. Anything that voices opinion is his own, especially messages acknowledging shortcomings, which might not make for the best marketing, he said. Despite the number of posts, Carvalho said he doesn’t typically spend more than 15 minutes a day posting to Twitter — what he posts is in the moment. Tweets celebrating events or sharing basic information are usually done by the district.

“If it had punch, if it had a lot of edge, if it ventured into a political conversation, where I was picking a side or a potentially controversial issue, that was me. I expect that to be shouldered by me and nobody else,” he said.

Nearly half of @LASchools students have been chronically absent this year, data show. Reposting because if we do not address this, we will not be successful at anything else. https://t.co/eYS31vIDbz

Avid social media use isn’t just reflective of Carvalho either. Other superintendents, including Palo Alto Unified’s Don Austin, have also taken to Twitter to communicate district news, show what schools are working on and share an occasional Wordle score. Many districts have relied on social media to get information across as needed alongside typical communication methods such as phone and email.

“It shows the importance of connection, even if it is only a limited number of characters that you might be able to use on Twitter or even if it’s just a very quick response to someone,” Lindemann said. “Often that can go a long way to making those folks feel valued and helping them to feel like their voices are being heard.”

With multiple posts a day, Carvalho’s social media use is quite prolific in comparison to many other superintendents, including Chancellor David Banks, who heads the New York City Department of Education, the largest public school system in the country. LAUSD ranks second.

That connection has served as encouragement for another district parent group, Our Voice/Nuestra Voz, which is made up of Latino families. Our Voice/Nuestra Voz is hosting a series of workshops on digital skills with support from the Los Angeles Public Library with the hopes that by the end of the series, parents will be able to take to Twitter to advocate for their own concerns within the district.

For now, founder Evelyn Aleman uploads videos to Twitter on their behalf, featuring parents speaking on issues they hope to see addressed within LAUSD. Since the initiative began in March, the videos have focused on special education and achievement gaps.

“We’ve sent the letters — we haven’t gotten any response,” Aleman said. “This was the next stage. We were like, OK, if they’re not going to respond to our letters, maybe what we need to do is do videos of each one of us and express to them what we’re living.”

Lourdes López is an ⁦@LASchools⁩ parent of two special ed students. The pandemic has had a tremendous impact on their education. Without access to leadership, she’s shared this video with #OurVoice hoping it reaches ⁦@LAUSDSup⁩, his cabinet and the school board. pic.twitter.com/Q5AiX4ZnvU

Rocio Elorza is one of the parents who have been attending the Our Voice/Nuestra Voz workshops since they started in early April with email basics. Digital literacy has been a major barrier for Elorza and many other parents across the district who are not fully fluent in navigating the digital world. Elorza wants the course to be a way to close that gap and get her voice out there.

“I hope he listens to us,” she said in Spanish. “That’s why our parents want to cover all the social media networks, so that we can be heard by him. On his own, he will not make change; he also needs parents.”

Carvalho said he reads most of what’s addressed to him. He said he responds to posts he finds critical and primarily to issues he feels he hasn’t yet addressed to avoid being repetitive.

Coming to LAUSD has not only been a change in his physical environment but a change in his online environment as well, though there are still many similarities, Carvalho said. At LAUSD, he’s noticed several differences from Miami-Dade County Public Schools, where he served as superintendent for nearly 14 years, including an increase in diversity and a more active monitoring of his words and actions on issues groups are organizing around.

“There are entities that, no doubt, I’ve noticed, are waiting to see what I will say or do about a specific topic,” he said. “I feel like sometimes they already have lined up the response, which means that there’s an expectation that I’m going to put something out there on a certain topic. So that I sense is a bit more organized than what I had in Miami, but at the same time, very organic. I see a lot of spontaneity associated with the interactions here in L.A.”

As Carvalho looks forward to his next few years as superintendent, he knows there’s an opportunity to expand, innovate and diversify his presence online. He said he knows he wants to meet stakeholders where they are.