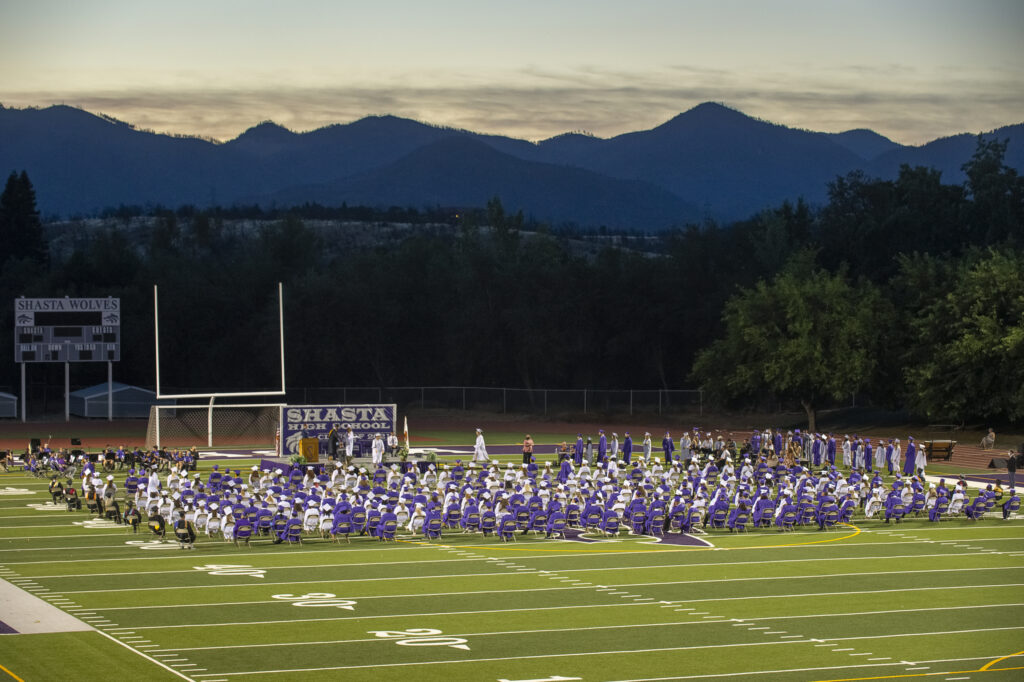 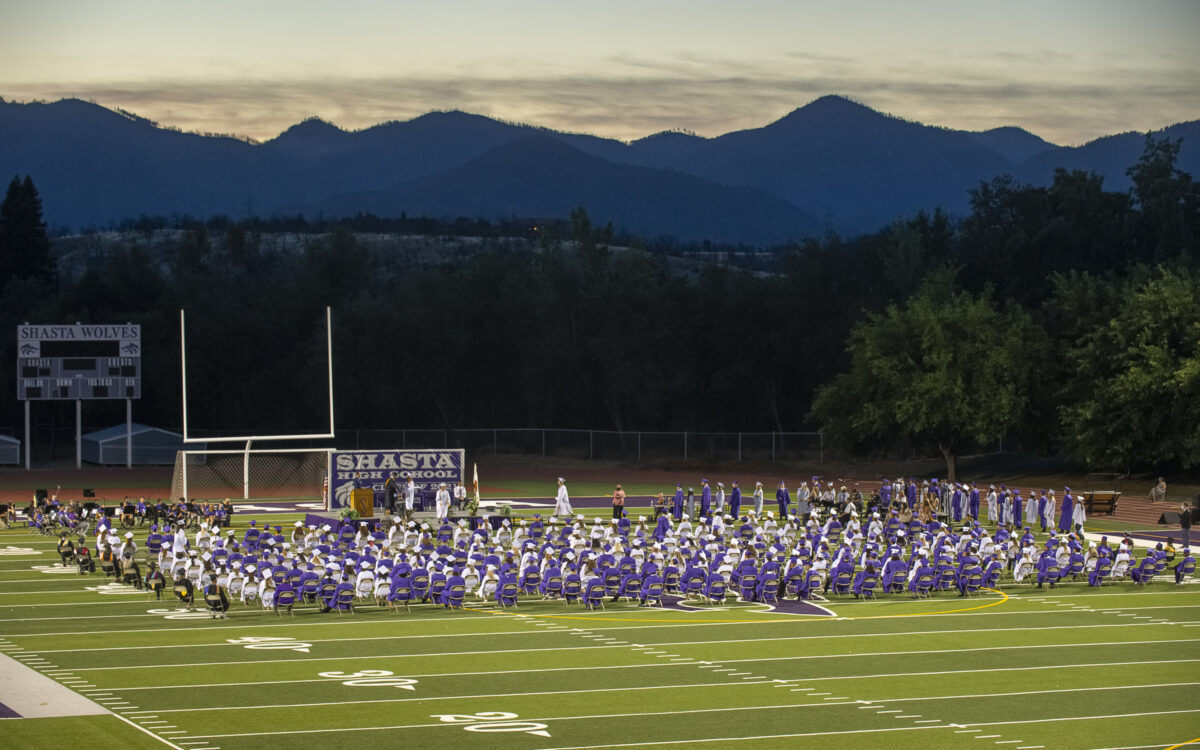 Credit: Randall Benton/EdSource
The graduating class of 2021 sits in chairs spaced for social distancing during the graduation ceremony at Shasta High School in Redding on June 4, 2021.

Credit: Randall Benton/EdSource
The graduating class of 2021 sits in chairs spaced for social distancing during the graduation ceremony at Shasta High School in Redding on June 4, 2021.

California high school seniors were in 10th grade when the Covid-19 pandemic closed schools and sent them home to learn. This year, many seniors are either struggling to earn enough credits to graduate or, because of a new state law, are graduating with fewer credits and requirements than classes before them.

Assembly Bill 104, signed by Gov. Gavin Newsom in July, allowed parents to request that D’s and F’s earned in the 2020-21 school year be changed to pass or no-pass grades. It also gave last year’s juniors and seniors the option to graduate with the state’s minimum requirements, made up of 13 courses totaling about 130 credits. Students also can take a fifth year of high school if needed.

Despite these flexibilities, some high school students are still lagging academically, and school districts and their teachers are working hard to help them catch up. Popular tactics include instituting block schedules that allow students to take more classes and add tutoring sessions into their school days, as well as meeting with students to set up graduation plans and expanding after-school tutoring programs.

It’s hard to know how many seniors are failing classes this school year, as first-term grades aren’t yet available, but it’s no secret students are struggling, said Alix Gallagher, director of strategic partnerships for Policy Analysis for California Education, or PACE,  an independent research center at Stanford University that focuses on education.

“I’m hearing it everywhere,” she said. “Last year was their junior year, and they spent it online.”

Data from Core Districts, a collaboration of California school districts working to improve student achievement, shows a 10% increase in the number of ninth graders at 15 schools across multiple districts with at least one D or F in college preparation courses in the second semester of 2020-21, compared with the same semester of the 2018-19 school year.

“It’s not a small leap to say it isn’t just ninth graders (who are failing more classes),” Gallagher said.

Students who stopped showing up for school weren’t included in those numbers, Gallagher said.

“Some of the students the hardest hit were the ones already struggling,” she said.

Educators contacted by EdSource overwhelmingly said that social-emotional issues are the primary reason students are struggling academically. Schools have added therapists, counselors and social workers to help students to deal with emotional issues, often related to the pandemic, so they can get on track academically.

Tatiana Torres, 17, a senior at Heritage High School in Brentwood, started attending high school her sophomore year after three years in a home-hospital school program because of an injury. She was just settling into the high school campus — making friends, changing classes, dreaming about school dances — when the pandemic hit, and she found herself at home again.

Even though she was accustomed to studying independently, online distance learning was a struggle, Torres said. “It was a difficult time academically,” she said. “ There was so much emotion going on. It was really difficult.”

But returning to school was also hard. Along with trying to get reacquainted with old friends, adapting to the return to school and being part of a class again, seniors had to make sure they had enough credits to graduate, Torres said.

“I know in my class, especially in the beginning of the year, people couldn’t pay attention,” Torres said. “Some people just couldn’t do it. Some people couldn’t focus. If you haven’t been doing it in the last one and a half years, getting back into it is very difficult.”

David Cohen, an English and writing teacher at Palo Alto High School with certification by the National Board for Professional Teaching Standards, said students are still trying to get acclimated to classrooms again, as well as to academic rhythms and expectations. The problems in his classes seem to be overall work habits and drive, he said.

“Anecdotally, there has not been a huge increase in the number (of students) that actually fail, but an increase in those who come close and need extra support to stay on solid ground,” he said.

Many teachers are trying to provide more structure for students by guiding them through their work, but they also are offering more flexibility when students have trouble completing work on time, Cohen said.

School districts are getting creative to keep students on track

Los Angeles Unified, the state’s largest district, with 450,000 students, and Nevada Joint Union High School District in Grass Valley, with 2,686 students, were two of the districts that adopted a block schedule to help students catch up.

A block schedule allows for longer class periods and fewer classes each day. Individual classes are held a few times a week instead of five, often allowing students to take more classes and earn additional units.

Los Angeles Unified saw a 1.6% increase in students earning a failing grade in the 2020-21 school year, compared with 2018-19 — the year before the pandemic — although the graduation rate increased slightly.

“Los Angeles Unified has aggressively worked to increase instructional opportunities and credit recovery for all students, including the adoption of block scheduling and eight-period school days to enable students to graduate on time and be eligible for post-secondary opportunities,” said district officials in a statement.

“If students are struggling in any particular thing, counselors will assign them to get additional assistance,” said Superintendent Brett McFadden. “If students are doing well and are on target they can use the 35 minutes for homework. “

The district also went to a pass/no pass grading policy a few months after schools closed in 2020 and agreed last year to allow students who were struggling to petition the district to allow them to graduate with a minimum of 160 credits, instead of the district’s usual 210-credit requirement.

At the end of last school year, counselors also met with credit-deficient students and their parents to develop a graduation plan and to offer services like after-school tutoring and summer school.

“Because of early actions we took, we aren’t facing a high number of seniors at risk of not graduating,” McFadden said.

San Juan Unified School District in Sacramento was another district that didn’t wait for legislators to pass AB 104 before they stepped in to make graduating easier for seniors impacted by the pandemic. District officials decided early in the pandemic to allow students who had been on track to graduate before the pandemic to earn their diploma even if they had fallen behind since.

“We basically just notified them and said, ‘Hey, by the way, you know you don’t have to go to summer school. You graduated,’” said Brett Wolfe, a director with the school district.

District officials expect that the legislative flexibilities that are still in place and district strategies to accelerate learning will keep graduation rates around 96% — the same as last year.

Some strategies the district uses include meetings between counselors and students and their parents to ensure students who are struggling are aware of how many credits they still need, as well as the academic interventions that are available.

“We want kids to graduate what we call college-, career-ready,” Wolfe said. “AB 104 is a safety net, not a strategy. And so really that’s the message we want to send.”

To accommodate students who are behind on credits, the district increased access to online credit recovery courses and summer school programs, and added flexible schedules at high schools that include 30-minutes of designated time each day to provide academic intervention, enrichment and emotional support to students.

“It’s very hard for them, coming back full time,” said Kristan Schnepp, assistant superintendent of secondary education at San Juan Unified. “There’s just a lot of stress that goes along with that return. There was a lot of trauma that happened for students over the last 18 months.”

San Bernardino City Unified, a district of 48,755 students in Southern California, also has seen some increase in failure rates, said Sudha Venkatesan, director of secondary education for the district.

“The learning loss is evident,” she said.

Many students fell behind academically during school closures because of a lack of attendance, including problems getting students to go online and turn their cameras on, Venkatesan said.

The district added tutors and increased access to online classes that allow students to make up credits. The district’s summer school program also had some of the highest enrollment numbers since the program began about seven years ago, Venkatesan said.

San Bernardino students who were affected by the 2020-21 school closures were also allowed to submit a petition to waive the district’s graduation requirements, which are currently 220 credits, and complete the state’s minimum course requirements of about 130 credits. A district team of counselors, parents and school administrators vetted student petitions, ultimately approving about 35 requests last year.

“There has been a further separation of the haves and have-nots,” McFadden said. “Students from a high social-economic status and more stable homes, those students continue to get enrolled into colleges, and we aren’t seeing much of a change in that. Covid’s impact has been on students who have lower economic status and students who are having more challenges, academic and social-emotional. It further exacerbates the challenges they are facing.”