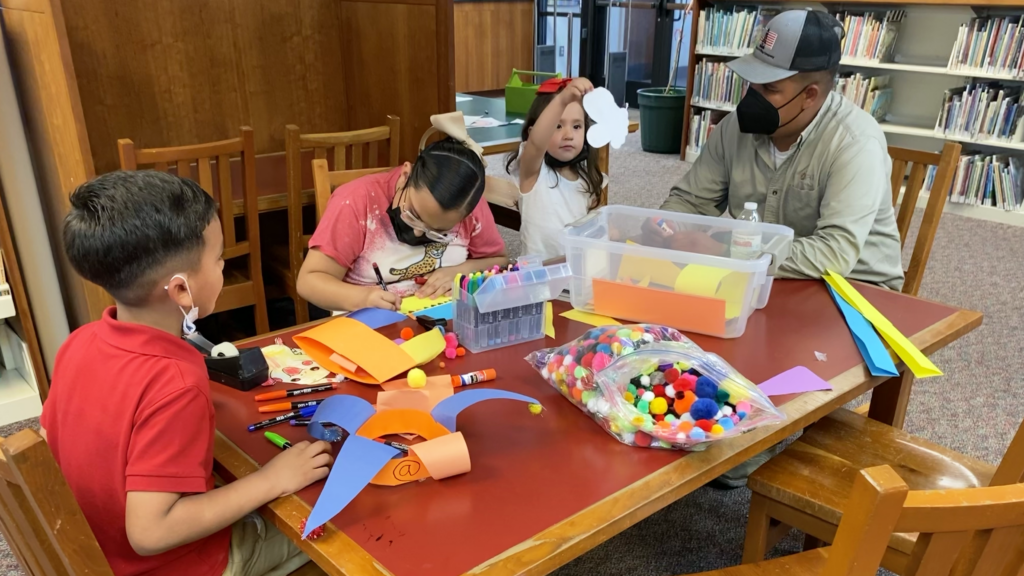 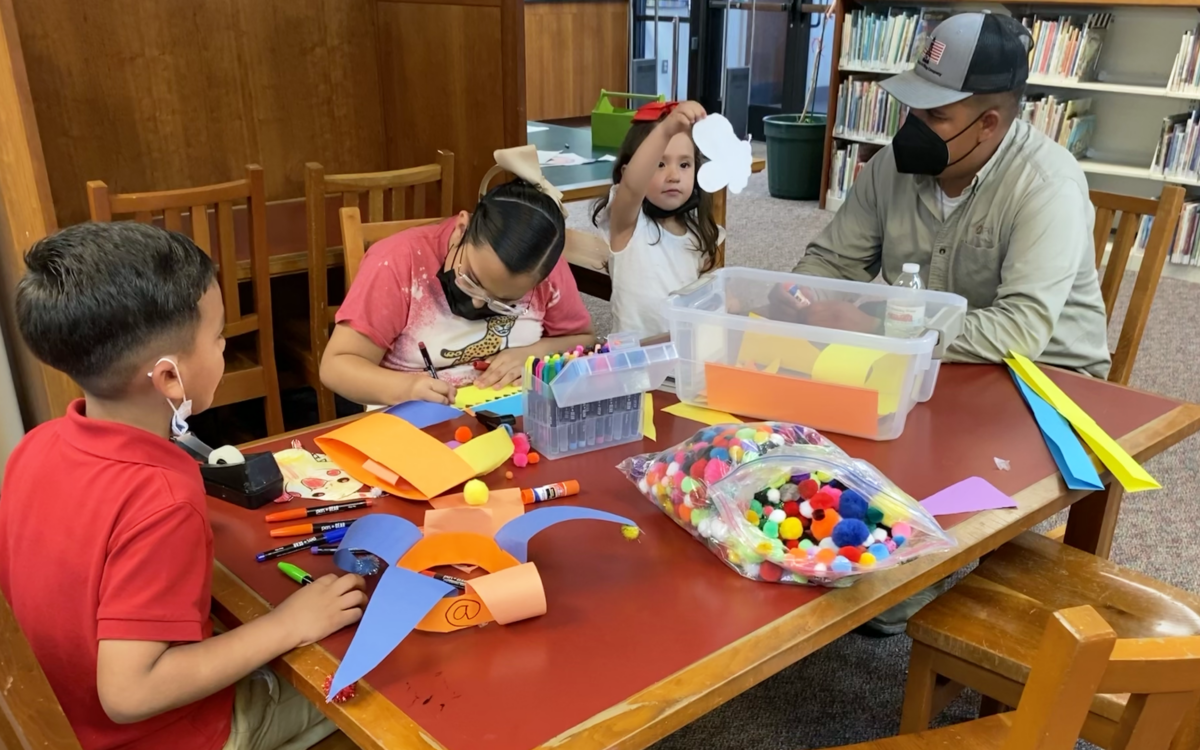 Credit: Emma Gallegos / EdSource
Rafael Serna enjoys coming to the library with his children. He helps three of his children at the crafting table, while his daughter receives tutoring at a back table in the library.

Credit: Emma Gallegos / EdSource
Rafael Serna enjoys coming to the library with his children. He helps three of his children at the crafting table, while his daughter receives tutoring at a back table in the library.

Hearing the protests of its youngest readers, Kern County has blocked McFarland city leaders’ plan to convert its community library into a police station.

The Kern County Board of Supervisors passed a budget last week that not only ensures the small town library will stay open, but that its service will be expanded from two to five days a week.

The plan to move McFarland’s library was met with backlash in the agricultural town of 14,000, including 3,000 signatures in an online petition. Earlier this year, the City Council, the superintendent of McFarland Unified and the city parks and recreation director all sent letters to the county, which owns the library, asking that the library be turned over to the city. But its patrons, especially its youngest ones, demanded that the library stay put and that it open every day as a fun, safe place to hang out after school and in the summers.

“It will give the children who need it most safety and security five days instead of two days,” he said.

Corr said expanding its service gives McFarland residents more days to job hunt, work on homework or projects or simply escape the heat — a crucial point during a week when temperatures are soaring.

“It will mean so much that cannot be measured,” said Corr.

“The staff are really excited, and they have a lot of programs planned,” said Andie Sullivan, director of the Kern County Library.

“It makes it easier because we don’t have to cram everyone into two days,” she said.

The Kern County Library is the worst-funded county library system in California. Its libraries have about $7 per resident, far below the state average of $46. This results in libraries with severely limited hours. McFarland’s branch will become the beneficiary of a county decision to expand staffing throughout the Kern County Library system with one-time federal Covid funds.

But Kern County Chief Administrative Officer Ryan Alsop warns that libraries and everything else funded by the county are at risk of stagnation and further cuts. The Kern County Board of Supervisors is asking voters for the approval of a 1 percentage point sales tax increase to stabilize county funding.

McFarland’s police chief and city manager, Kenny Williams, had mixed feelings about the new plans. On the one hand, the McFarland Police Department is cramped and badly needs a new headquarters, he said. Taking over the library’s current building seemed like the best option because the city can’t afford to build a new headquarters from scratch.

But he said he respected the decision of the county, which owns the building. He is also glad to see the library will be open more often — part of city leaders’ plea to take over the building was that it was underutilized.

Kern County has been making an effort to return its library staffing to pre-pandemic levels, Alsop said. One community, tired of cuts and threats of closure, decided to secede from the county library system and create the municipally-owned Shafter Library and Learning Center. This freed up funds for the nearby McFarland library, Alsop said.

The Kern County Library budget has not grown, but it has shifted more of its funds to staffing. Last year the library used federal Covid funds to purchase new technology, but this year it created new full-time and part-time positions.

The expansion of hours in McFarland has been made possible by that shift. It also means that two of the busiest branches in the system — Beale Memorial Library and Southwest Library, both in Bakersfield — will also see an expansion in their hours, Sullivan said.

But the Kern County Library is still far from offering full-time service. The busiest libraries outside of Bakersfield — Ridgecrest and Tehachapi — are open four days a week. The other branches are open one to three days a week. None are open after 6 p.m. or on weekends.

Alsop said it would require an additional $5 million to open the remaining branches five days a week. This year’s library budget is just under $9 million.

“I want my libraries open across the county in evenings and on weekends,” said Sullivan. “But we’re living within our means.”

Sullivan acknowledged that her department isn’t the only one that has faced austerity in the county.

Kern County’s budget has been stagnant for the past seven years, while the problems it must tackle, such as homelessness and the state’s highest murder rate, are only increasing, Alsop said. At the same time, the county projects a loss of tax revenue as the state phases out fossil fuel with a goal of ending oil extraction by 2045, impacting the oil and gas companies that make up a third of property tax assessments.

About $2.5 million in federal Covid funding from the American Rescue Plan Act and the CARES Act, which is spread over three years, has allowed the county to expand its library staff. The county was also able to invest nearly $1 million into new library technology with these one-time federal funds.

That represents an unprecedented investment, Sullivan said. Libraries are full of decade-old computers, and many of them are “hand-me-downs” from other county departments, including prisons.

“We’ve never had a fleet of new technology,” Sullivan said.

But those federal funds will run out. This November unincorporated residents of Kern County will be asked to pay an additional 1 percentage point sales tax to help the county weather a financial crunch that shows no signs of abating. Many Kern cities, including Bakersfield, have sales taxes already. Unincorporated residents who live outside cities and rely on the county for services have been most acutely affected by the county’s budget woes. But countywide services funded by the county, including the library, would benefit from the sales tax increase, Alsop said.

During a Board of Supervisors meeting in June, Supervisor Zack Scrivner said without the tax being passed, he foresees a future where other departments are shuttered to keep public safety departments afloat.

“I don’t think that’s the kind of county we want to live in, where all we do is public safety. We aren’t able to do quality of life anymore,” said Scrivner. “And that is what’s on the horizon.”

A simple majority of county voters would have to approve the measure for it to pass, but it faces high hurdles in the tax-averse county amid rising inflation. A similar measure failed in 2018 when it garnered only 35.32% of the vote.