After living in her van in a city lot, she now feeds others who park there 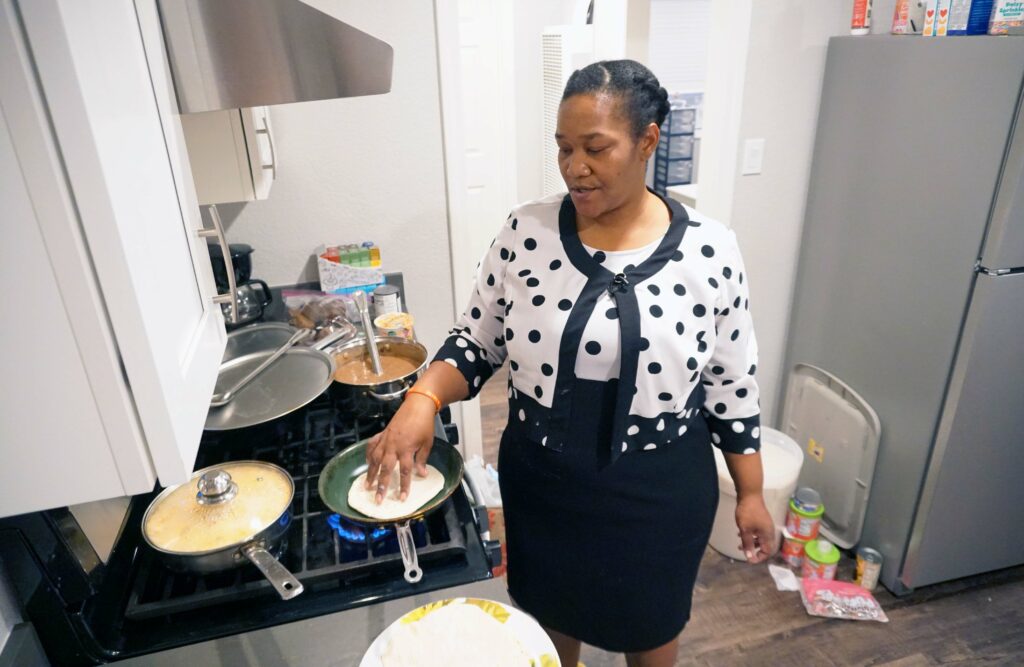 Out of her new apartment’s kitchen, Tami Rossell spends hours each week cooking and preparing hot meals for those who live in their vehicles and sleep in city-designated safe parking zones.

A place to park makes a difference for homeless families

Tami Rossell who lived in her car for almost a year, through a school district safe parking program, now helps feed her neighbors still living in their cars.

EdSource · A place to park makes a difference for homeless families

Three nights a week, Rossell visits that night’s designated parking lot in Union City. From her vehicle, she brings out about a dozen plastic foam food containers that she has prefilled with the evening’s fare.

It’s always nighttime and dark by the time she arrives, but she insists on scanning the parking lot for vehicles she might recognize so she can personally deliver the food and ask how they are holding up.

She leaves behind enough meals for others to get when they are ready.

The meals she cooks are mostly made with staples donated by local community organizations. If she needs additional items, she pays for them herself.

She sells clothing, face masks and purses that she sews herself to help fund the food purchases.

She then volunteers her cooking time through the catering business she has founded to help provide the meals to her former neighbors.

She has also received some relief from the stress of paying her full rent through a local anti-domestic violence organization called Ruby’s Place. That rental subsidy has been life-changing, and it has allowed her to better help others, she said.

Rossell and her three youngest children were sleeping in her van alongside them just four months ago, after her 16-year-old daughter convinced her the parking lot with a security guard was safer than a hotel room where they were often catcalled and where the rent was just too high.

“Her trust in me is what freed us,” said Rossell, who now lives in Hayward just a few miles south of the San Francisco area’s East Bay. “When I think of home, home is safety. And for the first time in my life, I had a home. My car became home.”

Rossell, a spirited Black woman in her forties who studied psychology in college, has a history of turning her own life experiences into a stream of support for those around her. For example, she periodically teaches a course with the city of Hayward where she shares how to feed a family of 10 on $50 per week — all stemming from her experiences feeding her seven children on a limited budget. 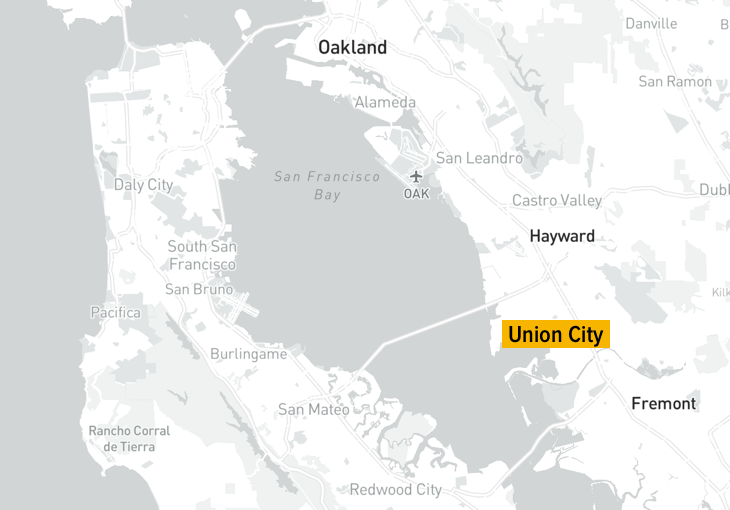 That resourcefulness, she said, is what led them to CAREavan, the safe overnight parking program in Union City, and helped them make the most out of it.

CAREavan was founded in 2016 through a partnership between Union City, New Haven Unified School District, various community organizations and local parishes. Everyone wanted to help the residents living in poverty who make up about 5.6% of Union City’s population of about 70,000.

At the time, the school district had noticed a drop in student attendance so significant that they sent school staff to check in with the families of the students who were missing school. That’s when they realized that rent hikes throughout the region had pushed many families into their vehicles.

“We just felt it was a human right to have access to a restroom and to water, and our families needed that,” said Lourdes Villegas, a community specialist with the Union City Family Center and the homeless liaison for the New Haven Unified School District.

CAREavan was then created rather swiftly, with initial conversations occurring in January 2016 and the first participants joining the program by May of the same year. It began by offering three basic living necessities for families with children: a secure place to sleep, access to showers and access to restrooms from 8 p.m. to 7 a.m. every day of the week. Eventually, the program allowed others without children to also use the overnight parking.

Initially funded solely through the city’s Community and Recreation Services department, the program has since received grants that have allowed for additional amenities such as contracting a mobile hygiene unit from the city of Fremont that provides two showers plus three sets of washers and dryers on a weekly basis.

Because each location is used by the general Union City community during the business hours – they range from community centers to senior centers — the locations change each night to ensure cars are driven out of the parking lots each morning.

“I’ve heard from a lot of people that they would rather sleep in their car sometimes than stay in a shelter, because they don’t feel safe in those places and at least in their car, they do,” said Jesus Garcia, the program coordinator for CAREavan.

If someone is interested in CAREavan, Garcia is the person they connect with to receive an enrollment form and an overview of the program rules, which include quiet time after 10 p.m., consistent supervision of all children and pets, and not allowing any unauthorized people and vehicles to be on the premises.

For years, Rossell had researched van life, a concept where people choose to live in their vans not out of necessity but because of the freedom of movement it can provide. She began looking into it after a first bout with homelessness in 2012 left her knowing she never again wanted to feel forced to rely on hotels for shelter.

Her goal was to slowly purchase items she would need once she chose to live in her van —such as a power generator, a portable toilet, a portable shower system, curtains for privacy, an inflatable bed — and then go on the road once her high school-age children both turned 18 years old.

It turned out she needed to use those items much sooner than expected.

That’s because toward the end of 2020, Rossell and her three youngest children began feeling unsafe living in an apartment, in part because of issues with neighbors and in part due to incidents of domestic violence. She initially moved in with one of her adult daughters, but she didn’t feel comfortable staying longer than two months.

Rossell initially enrolled so they could have a safety net, but she still wanted to try keeping her children inside the hotel room.

But that soon changed when Rossell had to insist that the children ages 7 to 16 stay inside. She was worried about the catcalls from passersby. She especially wanted to protect her two daughters from sex traffickers who were rumored to be in the neighborhood. On top of that, Rossell was sewing most hours of the day with little sleep in order to make enough face masks and clothing she could sell to keep up with the high cost of the room.

Her daughter, seeing how little sleep Rossell was getting, talked to her about using CAREavan.

CAREavan turned out to be the best decision for her family. Staying there in their van each night made it easier for her children to do their homework, for them to cook dinner each evening, and for her to use her sewing machine to make the face masks and clothing without the pressure of paying for the hotel room.

The program felt freeing and safe, said Rossell, who relied on CAREavan all through 2021. She cherished feeling secure after all the instability they had lived through.

Joining the CAREvan program also eased the stress and tension among the children, which had triggered fights and arguments.

“I knew nothing could get to me. There was no one controlling me and telling me which way to go,” said Rossell, as she described the importance of her freedom after experiencing domestic violence throughout her life. “And the people there within the program become family; we look out for each other. For the first time, I just felt so safe and protected and just a part of somewhere that I belonged.”

On a recent Monday, she filled disposable containers with rice, beans, corn, (some had chicken) and handmade flour tortillas. She recognized just one of the handful of cars that were parked by 8 p.m. on that night at a local community center and went right up to it to deliver a meal. After a brief conversation, she told the man, who was there by himself, that she would check in again with him on Wednesday night when she returned with another stack of meals.

She also noticed a new couple on that day, someone she had seen only a handful of times over the past month. There was a look in the woman’s eyes, she said — a pained expression she recognized. She understood how they felt not knowing how to move their lives forward.

“When you’ve lived a certain pain, you know it without saying a word,” Rossell said. She approached the vehicle to try connecting with the couple, but only the man in the vehicle looked at her and responded. She would continue trying to connect every time she saw them, she later said.

“If I’m on day 30 of my pain and you’re on day one; there’s absolutely something I can do to help you pull you through. I’ve lived through that first 30, right?” said Rossell. “So, it’s just about helping. I guess my thing is I believe in loving with my whole heart.”