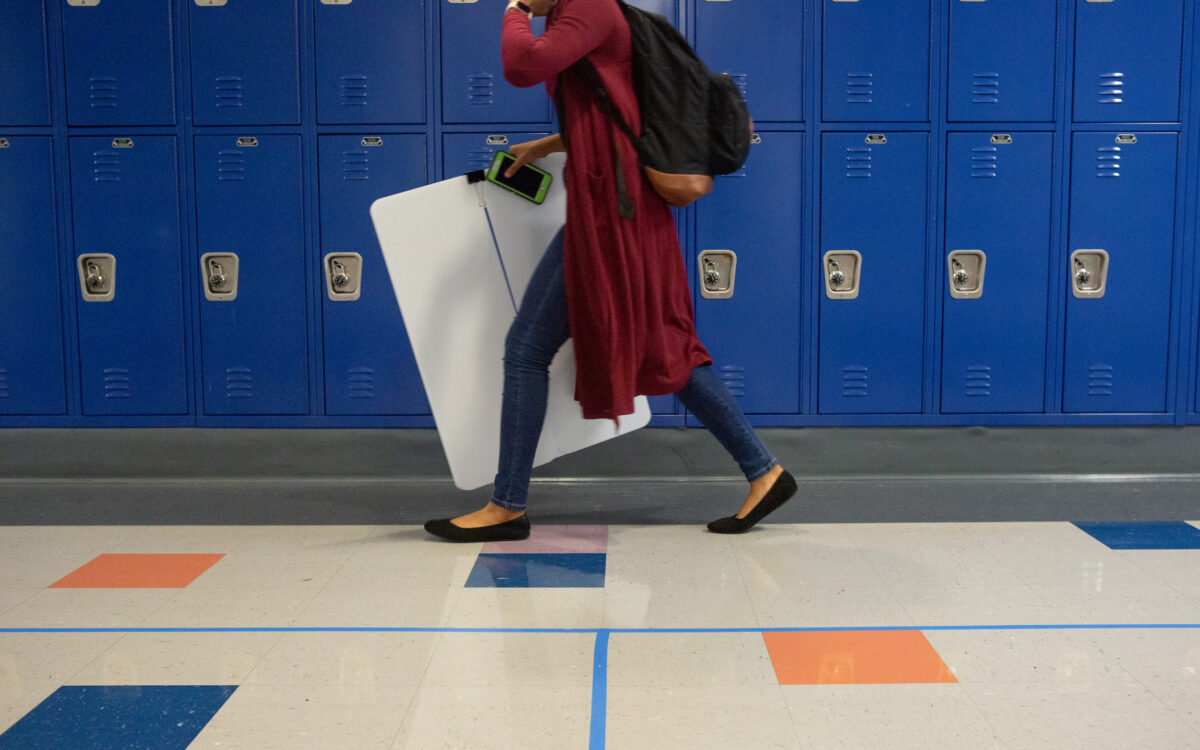 The unexpected drop in statewide school enrollment last year of 160,000 students may prove to be a blip, ready to rebound as the coronavirus recedes. Or that one-year 2.6% drop could be an oversize harbinger of what demographers are predicting will be a decade-long enrollment decline in California.

The fiscal crisis may be a migraine now or a mounting headache later; the answer is not if, but when, according to Michael Fine, the state’s respected fiscal worrywart. He said districts would be wise to start planning now, and take action starting next year, to deal with what for many districts will be a substantial loss of revenue from a system that ties funding to the number of kids who show up to class every day.

“Take decisive action, the earlier the better,” Fine told district administrators last week. “The depth of pain you will feel relates to how much time you wait to address changing circumstances.”

Fine is the CEO of the Fiscal Crisis and Management Assistance Team, or FCMAT, a school finance agency tasked with helping school districts to recognize and solve financial troubles before they become swamped by them. He spoke at a webinar sponsored by School Services of California, a Sacramento-based lobbying and consulting company.

West Contra Costa Unified is among the districts that could face substantial budget reductions as early as next year. Go here for the story.

The California Department of Finance is projecting an 11.4% decline in statewide enrollment by 2031, a loss of 703,000 students from pre-pandemic 2019-20. Although long-term troubles loom, the impact will not be uniform across regions or even among neighboring districts.

The biggest losers will be in coastal counties. Some smaller counties are expected to grow, some with transplants from Los Angeles and the Bay Area moving inland and to the Sierra foothills. 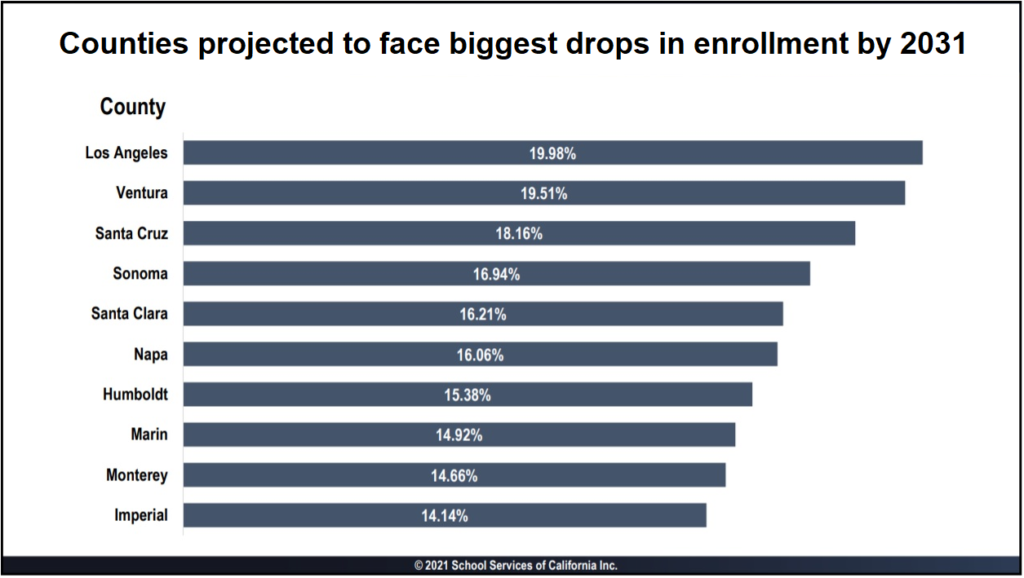 The state is projecting the statewide post-pandemic enrollment decline for the next decade, starting in 2021-22, at 8.7%. Nineteen of the state’s 58 counties will lose students at a faster-than-average rate, starting with 20% in Los Angeles, the state’s most populous county. Twenty counties, mainly small and rural, are projected to grow nominally. Among those counties, the largest increase is projected for San Joaquin County, by only 6,000 students.

Fine presented state demographic data that underscore the prediction of a decade-long enrollment decline in most districts: 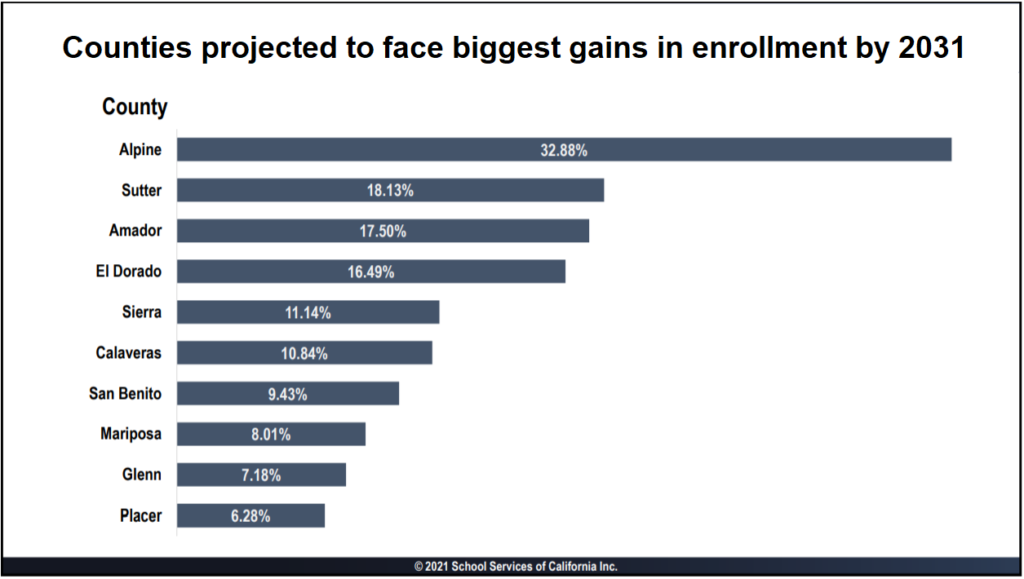 Covid may have accelerated the enrollment decline in many districts, as families that lost jobs decided to move to other regions or out of state in search of cheaper housing. The pandemic created new challenges for districts, with parents wary of sending young kids to school until they’re vaccinated and parents opposed to vaccinations and masks vowing to home-school their children or send them to private schools.

The state won’t release final enrollment numbers for this year until early next year, but initial figures from individual districts are dashing hopes of a rapid turnaround in enrollment.

San Francisco Unified has reported another down year, for a two-year loss of 3,500 students, or 6%. Sixty miles south, at the edge of Santa Clara County, Gilroy Unified had expected a rebound from last year’s loss of 314 students. Instead, it looks like a drop of an additional 182 students, for a two-year total of about 500 students, slightly less than 5%. Alvaro Meza, the chief business officer for the district, said that after factoring in a steady decline in births and smaller cohorts of students moving through the system, he is projecting enrollment will drop to 8,600 by 2031, a loss of more than 20% from pre-Covid enrollment.

For two years, the Legislature shielded districts from revenue losses due to declines in enrollment and disruptions in attendance as schools went in and out of distance learning. School budgets in 2020-21 and 2021-22 have been funded at pre-pandemic attendance levels. But lawmakers said districts should return to collecting daily attendance this year, which would affect the revenue they can collect from the state starting in 2022-23.

Fine and others are referring to the impact of the declining enrollments as the “fiscal cliff.” They are urging districts to prepare for it through staff reductions and cutting expenses instead of burning their budget reserves. For many districts, the next two years will be a double whammy, coinciding with the end of record one-time state and federal Covid relief aid. For charter schools, which, unlike districts, will not be protected this year from enrollment declines and gyrations in attendance, the cliff looms now.

But district administrators and organizations representing them argue that, in making the decision in July to return to normal, Gov. Gavin Newsom and the Legislature didn’t foresee that the pandemic would extend to a third year, with dramatic effects on attendance and enrollment. Districts such as Stockton and Oakland are reporting that a third or more of their students have been chronically absent in the first two months of school. Districts that have built daily attendance to 95% are now seeing a drop in attendance — to 91% in Long Beach and 93% in Gilroy, representing potential losses, if they continue, of millions of dollars in revenue next year.

Districts are also dealing with a potential loss of money from students in independent study if they can’t complete paperwork, including contracts signed by parents, and document their daily participation.

“Even though kids are back in school, this is not a normal year,” said Edgar Zazueta, senior director of policy and government relations for the Association of California School Administrators. “We’re getting hit on a number of fronts.”

“There needs to be a stopgap measure, some sort of protection for one more year,” said Sara Bachez, chief government relations officer for the California Association of School Business Officers. The worst outcome, she said, would be for districts to start laying off new teachers and staff at the same time that the state is underwriting $2.8 billion in teacher recruitment programs that offer residencies and mentorships, college scholarships and opportunities for classified workers to get teaching credentials.

“To be desperate for staff and then let them go after training them — that’s an unhealthy way of operating business,” Bachez said.

Zazueta said he senses a “heightened awareness” among legislators of the predicament districts are facing but also a reluctance to extend the “hold-harmless” protection for a third additional year. But he is hoping nonetheless for a “soft landing to help with the impact of the decline.”

One option worth considering, Fine said, is to base attendance on a three-year rolling average, which would smooth out fluctuations. The state already uses this formula when determining the students’ eligibility for additional funding under the Local Control Funding Formula. Tony Wold, West Contra Costa Unified’s associate superintendent of business services, suggests establishing a base funding amount covering a district’s enrollment, and then providing a bonus to incentivize districts to increase attendance.

It’s possible that the fiscal cliff might not be as harsh as feared, at least next year. The phasing in of universal transitional kindergarten for 4-year-olds over the next three years creates an extra year of funded enrollment. State revenues are running ahead of projections, which means more money through Proposition 98, the complex formula that determines how much money goes to schools and community colleges. And the drop in enrollment may not affect the total amount because of the way the formula works when the economy is booming. (Under the Prop. 98’s Test 1, which will likely be in effect in 2022-23, total student enrollment is not factored into in the formula determining funding.)

California districts and charter schools also have received record one-time federal Covid relief funding, more than $20 billion over three years, which can be used through 2023-24. The distributions vary widely, based on the proportions of low-income children enrolled.

These mitigations may not eliminate a day of reckoning for declines in enrollment, just delay it. That’s why Meza is suggesting that the board consider closing another elementary school as part of next year’s budget. “It’s not my style to kick the can down the road,” he said.

But other districts likely will, said Robert McEntire, director of management consulting services for School Services. Along with putting off hard decisions, “the biggest threat to a district in this position (facing an ongoing deficit amid declining enrollment) is a belief the state will bail it out. I can’t tell you the number of times I have heard board members say exactly that.”