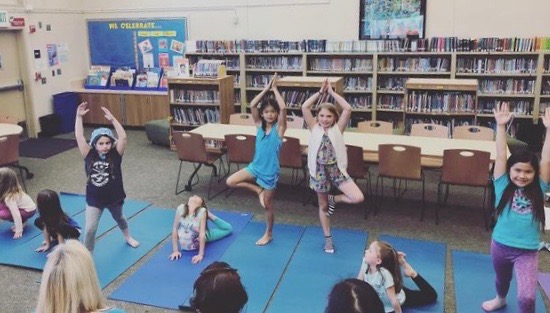 To help students relax, some California schools are adding something new — that’s actually very old — to the daily routine: yoga.

The ancient practice of stretching and breathing, often combined with meditation and mindfulness, is increasingly popular in physical education classes and after-school programs for students of all ages. Teachers say it helps students cope with stress and build physical and mental strength, especially valuable skills as students return to campus after more than a year of remote learning.

“Yoga is a good way for students to connect with themselves,” said Jesus Maldonado, an after-school teacher in the Hueneme Elementary School District south of Ventura. “Sometimes, when there’s a lot going on, they forget to think about themselves. This gives them a chance to relax and focus.”

Maldonado, who had never done yoga before he started teaching it to younger children a few years ago, said the results have been remarkable — for him and his students.

“Before we started doing yoga, the kids never really wanted to do their homework. But now it’s like night and day,” he said. “It helps me relax, too. I used to feel really stiff, but now I do yoga a few days a week, and I can go on with the rest of my day.”

Teachers don’t need special training or certification to lead students in yoga exercises, which are essentially stretching poses paired with deep breathing. Plenty of free curriculum is available to help teachers include yoga in their classes for as little as 10 minutes a day. It’s ideally suited for physical education class, but any teacher could incorporate yoga into the daily routine.

California is urging schools to enhance their student wellness offerings as campuses reopen, and yoga is a popular option in many districts because it merges physical and mental health and is relatively easy to implement. Schools can use money from several sources, including the CARES Act, to train existing staff in yoga instruction, purchase curriculum or hire yoga instructors.

In some states, yoga has been a source of controversy in schools, as some parents complained it constituted a religious practice. Alabama had banned yoga for almost 30 years until Gov. Kay Ivey signed a bill in May allowing the practice in schools, although the word “namaste” — a greeting in South Asia that’s a staple of many yoga classes — is banned because some conservatives say it’s a religious word.

California has had a much friendlier relationship with yoga. The age-old Hindu tradition began gaining popularity in the United States in the late 19th century, and in the 1950s the country’s first yoga studios opened in Southern California. Californians have been doing sun salutations, humming in the lotus position and lifting their hips in a downward dog ever since.

Terri Drain, a former PE teacher in Pleasanton who is now president of the Society of Health and Physical Educators, said schools should consider using some of their extra money this year to train teachers to lead yoga classes. Yoga could be particularly beneficial in helping students adjust to in-person school after remote learning, she said.

“There’s definitely a place for yoga in the K-12 physical education curriculum. Yoga is non-competitive, and every student can participate at a level that works for them,” she said, noting that it promotes balance, mobility, strength and a body-mind connection. “Students can use it to manage and reduce their stress. And yoga is a lifelong activity.”

Sheri Mulroe, a physical education teacher at Palo Alto High School, is one of the few PE teachers in California who leads a dedicated, yearlong class on yoga. Students can take it either as an elective or as a PE unit, and it’s become so popular that she teaches three or four classes a day, each with 20 to 30 students.

A teacher since 1991, she started teaching yoga four years ago as a way to help students cope with anxiety and depression. Palo Alto, in the heart of Silicon Valley, has one of the highest teen suicide rates in California, in part due to intense pressure to succeed academically and socially.

“This is a high-stress environment. It’s a pressure cooker. I wanted to give students coping mechanisms,” Mulroe said.

Next, she leads them in yoga poses, mindfulness techniques, meditation and breathing exercises, with a focus on physical and mental relaxation.

“Throughout the school year, I see a marked increase in their strength and flexibility. And they’re able to use the techniques, such as breathing, to help them deal with other stressful things, like tests, arguments, communication,” Mulroe said. “I feel all kids could benefit from a daily yoga practice, just to have some time every day when they’re not thinking about school.”

Nika Chapin, an incoming junior at Palo Alto High, said Mulroe’s yoga class helped her juggle a busy schedule of homework and extracurricular activities, including playing on the school volleyball team. Her sleep improved, too.

“I had yoga the last period of the day, and it was a great way to de-stress after a long day before I started homework and activities,” she said. “I was surprised I got a lot of exercise out of it. It was good because I got the exercise, but we got to learn mindfulness, too. … There’s no guarantee it’ll work for everyone, but it worked for me.”

Nika’s classmate Morgan Greenlaw, said she hated PE until she took Mulroe’s yoga class as a sophomore. The non-competitive pace was a relief, and she immediately felt the physical and mental benefits, especially during the pandemic, she said. Now, she runs, does strength training, practices yoga every night before bed and plans to assist Mulroe’s class beginning this fall.

“At the end of the day, I used to think about all the stressful things that happened, and it was hard to sleep,” she said. “When I do yoga, it’s like, ‘OK, we’re going to stop thinking about that.’ It really does help me relax.”

Yoga can work for younger students, as well. Nikki Curry stumbled across the idea a few years ago when she was running a children’s dance studio in Orange County and would occasionally get exasperated with students’ inability to focus.

“Finally, one day I said, ‘OK, let’s just relax. Let’s try some breathing.’ It was this miraculous discovery. Simple yoga poses worked with kids,” she said. “The benefits were real.”

Since then, she’s been on a mission to make yoga available to elementary-age children throughout California. She’s crafted a curriculum that meets the standards of the California AfterSchool Network and is working with county offices of education to promote yoga as an extracurricular option.

“My hope is to reach as many children as possible, regardless of what region or even state they live in because I believe so strongly in the positive impact of yoga and mindfulness on individuals and communities as a whole,” Curry said.

Her curriculum includes weekly themes, such as kindness and self-awareness, time to write in journals and plenty of songs and games. Children can pick animals to pose as, such as cats or snakes. Purists might not recognize the activity as traditional yoga, but each session finishes with quiet meditation.

“That’s what they love the most,” Curry said. “The physical benefits are great, but I’m more concerned about teaching kids to relax, learn how to calm down and regulate their emotions. I think the mental aspect of yoga is what kids benefit from most.”

Victoria Otto is also on a crusade to bring yoga to stressed-out students. The Chicago-area high school PE teacher has written a free curriculum, and she travels to PE conferences around the country trying to convince PE teachers to incorporate yoga into their repertoire.

“We’ve laid so much on these kids. They need an outlet where they’re not being judged, where they can learn to pick themselves up,” Otto said. “Yoga and meditation can help them process difficult emotions. They learn that it’s OK not to be OK. They learn that the emotions are not the problem — it’s about how you respond to them.”

PE teachers are well suited to teach yoga because they already understand physiology, how to manage a large class and how to work with a broad spectrum of students, including those with severe disabilities, she said.

It’s the perfect way to welcome students back to campus, Otto said.

“Yoga can help students feel centered, focused, connected to their community,” she said. “It’s a way we move and slow down at the same time. That’s what we all need right now.”