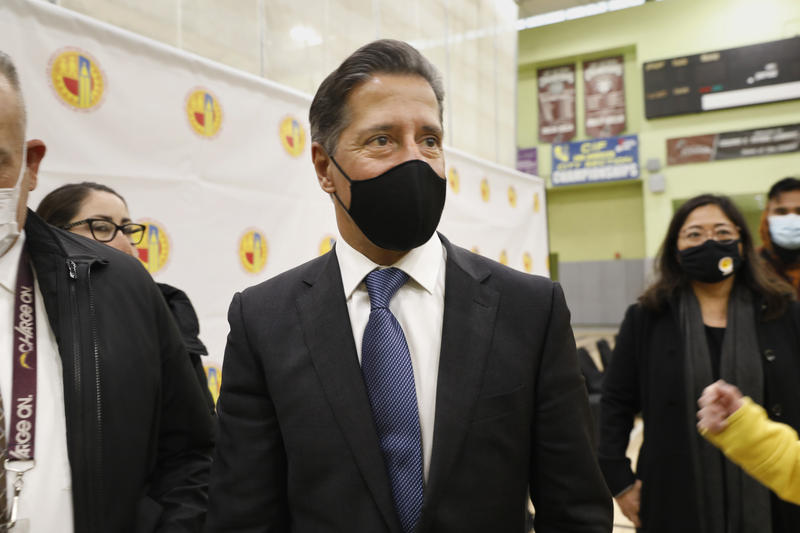 Alberto Carvalho, the incoming superintendent of Los Angeles Unified, on Tuesday pledged to dedicate himself to advancing equity and helping all students in the state’s largest school district reach their full potential.

Carvalho’s remarks at Edward R. Roybal Learning Center marked his first public appearance in Los Angeles since taking the job last week and also came after the district’s seven-person board unanimously approved his four-year contract, which pays him an annual salary of $440,000.

Carvalho will officially take over as superintendent by March. He comes to Los Angeles from Miami-Dade County Schools, where he is superintendent. Here are four things he said at his introductory news conference:

Enrollment declines have plagued Los Angeles Unified for years, and those drops accelerated significantly this year. Enrollment was down this year by nearly 30,000 students, a much steeper drop than in any recent year, according to the Los Angeles Times.

Carvalho said he is “deeply concerned” about the decline and noted there are similar trends in other large urban school systems, including New York City and Miami.

Carvalho pledged to be a “voice in the community, speaking about the benefits” of attending L.A. Unified, saying that the district will provide an education for students that “is not comparable to anything else they would get anywhere else.”

Carvalho said he supports measures the district has taken to mitigate the spread of Covid-19, such as requiring masking indoors, mandating vaccines and improving ventilation in schools.

“I think that is the right recommendation,” Carvalho said of extending the deadline. He added that the district already has “an exceedingly high percentage of students who are vaccinated,” with more than 85% vaccinated.

“That opens the door of opportunity for an expanded timeline,” he said.

When it comes to preparing students for college or a career after high school, Carvalho said, it shouldn’t be an “either-or” situation. Instead, the district should make sure it is preparing students to have both options after graduation.

“I think we ought to create pathways where every single student is entitled with the opportunity and the  skill set and the equitable access to educational programs that will lead to college, while simultaneously providing opportunities for students who may not want to go to college and may want to enter the workforce after some degree of technical training,” he said.

Carvalho on Tuesday touted that he expanded school choice offerings during his 13 years in Miami. Los Angeles Unified is no stranger to school choice. In fact, the district has more charter schools than any school system in the country and also has other choice offerings, such as magnet schools.

When asked if he plans to expand school choice in Los Angeles, Carvalho said he supports “publicly offered and accountable” choice programs.