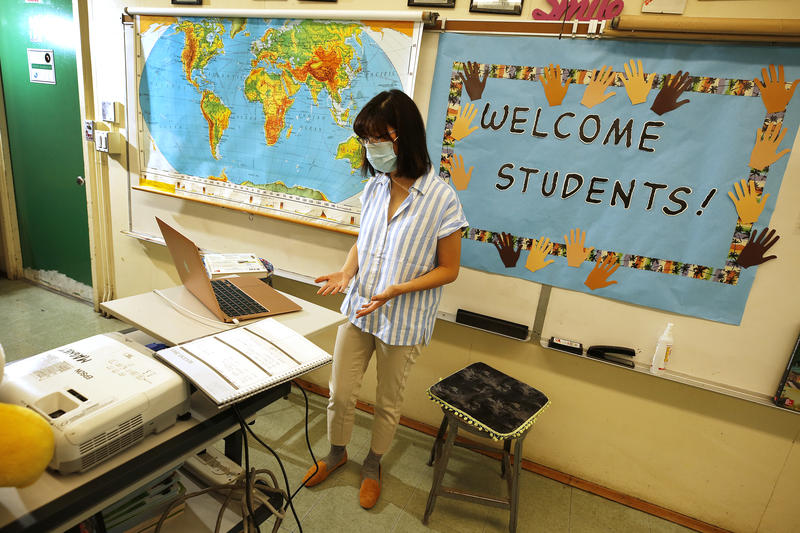 California's largest school district may reopen for in-person instruction as early as April.

Los Angeles Unified students are one step closer to returning to their classrooms after the district and its teachers union reached a tentative agreement on the reopening of schools for in-person instruction.

The agreement, announced Tuesday evening after monthslong negotiations, would affect 465,000 students in kindergarten to 12th grade in the state’s largest school district.

“As we have both stated for some time, the right way to reopen schools must include the highest standard of Covid safety in schools, continued reduction of the virus in the communities we serve and access to vaccinations for school staff,” Superintendent Austin Beutner and United Teachers Los Angeles President Cecily Myart-Cruz said in a joint statement.

The reopening of secondary schools hinges on Los Angeles County moving to the red tier, which is required under the state’s Blueprint for a Safer Economy. Los Angeles County is expected to move down to the red tier by March 17 if it maintains its current Covid-19 case rates and test positivity rates. It would be the first time the county has moved from the most restrictive purple tier since the blueprint was announced by Gov. Gavin Newsom in August of last year.

The tentative agreement appears to have support from the district’s school board. If the agreement is approved, it will remain in effect through June 30 of this year.

“I’m happy that there are safety measures: the vaccinations, the fact that we’re going to comply with the current county measures that students will return when we’re at the red tier,” said Aydé Bravo, a 2nd grade teacher at Maywood Elementary and a representative in UTLA’s board of directors. “And I’m glad that they have the safety measures and the protocols at our schools. So I’m happy over that, but I question the cleanliness at our schools. We haven’t had the full custodial staff in the past.”

Bravo, now in her 27th year of teaching, said that she hasn’t seen full custodial staff since the 2008 recession forced budget cuts, which led to fewer custodial staff on school grounds. Some of her co-workers, she said, called her Wednesday morning to say they would ask for a leave of absence because they feel unsafe returning to in-person instruction.

Teachers and staff would not have to return to their classrooms until after they receive both doses, if necessary, of the Covid-19 vaccine and reach maximum immunity. This process can take up to six weeks, depending on which vaccine is administered.

A return to campuses would remain optional for families. Under the agreement, preschool students would return to full-day, in-person instruction. Elementary school students would have daily in-person instruction under a hybrid model, with the option to continue with online-only instruction. Students in middle and high schools would remain in distance learning but would be offered the option to return to campus for “peer interaction, social-emotional learning and lessons for college and career exploration.”

Other stipulations in the tentative agreement include: