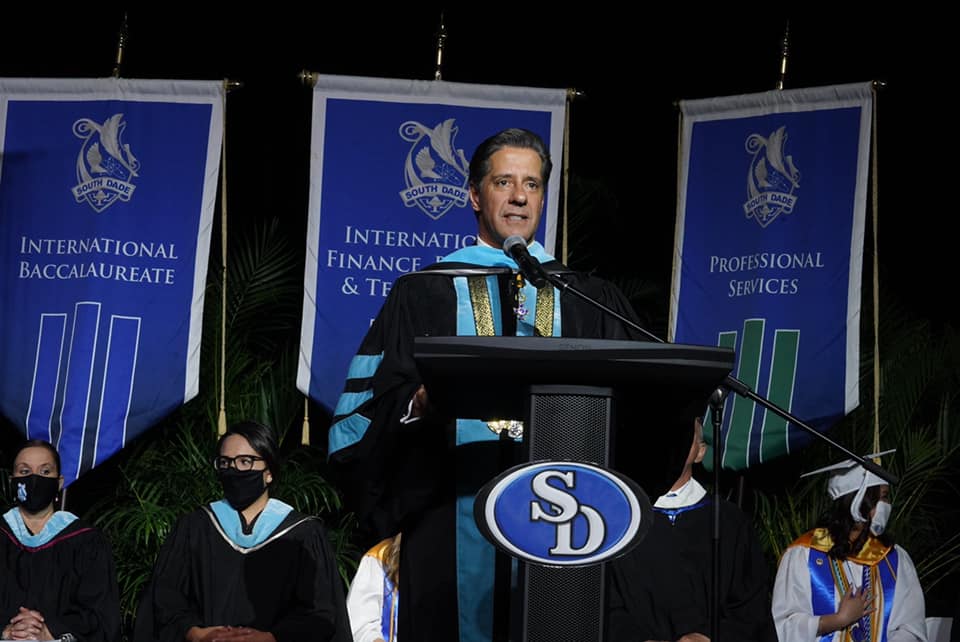 Carvalho has led the Miami school system since 2008.

Alberto Carvalho, the superintendent of Miami-Dade County Public Schools since 2008, will be L.A. Unified’s next superintendent, the district’s board of education announced Thursday following a closed session meeting. The board voted unanimously to hire him. Salary and other terms are still being negotiated. A contract is expected to be voted on next week.

“For the last three decades, I have selflessly dedicated my professional career to the children of Miami’s diverse community, and I am hoping to bring that same passion, compassion and commitment to the students and families in L.A. Unified,” Carvalho said in a statement Thursday.

During a press conference Thursday in Miami, Carvalho added that many of the challenges facing Miami schools also exist in Los Angeles, pointing to achievement gaps affecting low-income students, disabled students and Black and Latino students.

“We have a historic in nature, unprecedented learning loss as a result of this pandemic that has disproportionately impacted the most fragile amongst us — students of color, students who are poor, English language learners and students with disabilities,” he added.

In his 13 years leading the Miami school system, Carvalho is credited with steadily improving the academic achievement of students, L.A. Unified said in a statement Thursday.

The president of L.A. Unified’s board, Kelly Gonez, said in a statement Thursday that Carvalho brings the “deep experience” the district needs as the leader of a large urban school system, particularly as L.A. Unfied recovers from the Covid-19 pandemic.

“As the longtime Miami-Dade Superintendent, he established a clear record of positive student outcomes and has relentlessly worked towards greater equity for historically underserved communities. I know he will continue that focus in Los Angeles, and he is ready for the challenges and opportunities ahead of us,” Gonez said.

Cecily Myart-Cruz, president of the union representing teachers in the district, said Thursday in a statement that the union is ready to work with Carvalho to “build racially just, fully resourced schools that serve as community anchors, where educators are valued, families are supported, and students have the resources they need to thrive.”

L.A. Unified is currently being led by interim Supt. Megan Reilly. The last permanent superintendent of the district, Austin Beutner, stepped down from the district in June after three years on the job.

Carvalho grew up poor in Portugal and was the first person in his family to graduate from high school. After high school, he came to the United States and later started his career in education as a science teacher in Miami-Dade County. He would go on to also serve as an assistant principal and a communications officer for the school system.

L.A. Unified board member Jackie Goldberg said she was “overjoyed” by the selection of Carvalho, pointing to his background as a teacher and principal. The hiring of Carvalho stands in contrast to the 2018 pick of Beutner, which was criticized by some at the time because his background was in business and not education.

“We unanimously chose an individual who has been a teacher, principal, and superintendent of a major school system in Florida. I look forward to his leadership as he works with the superb employees of this district, and with the scholars and families we serve,” Goldberg said.

Carvalho said during his press conference that while he will bring his “personal philosophy” to Los Angeles, he won’t “impose” on the district without first getting to know its schools.

“I will listen carefully to the culture and to the tradition, to the practices of Los Angeles. Do not expect me to go to Los Angeles and impose pronouncements without first understanding clearly by having boots on the ground and traveling the community and walking into classrooms and speaking with teachers and parents and every single board member, the stakeholders of the community,” he said.

The selection of Carvalho as superintendent was cheered by Parents Supporting Teachers, a parent group in Los Angeles. In a statement, the group said it was cautiously optimistic about the hire and called it “a win” for public education.

Jenna Schwartz, co-founder of the group, said in a statement that Carvalho should focus on mental health issues, lowering class sizes and streamlining communication. “There are too many cooks in LAUSD’s kitchen. A decision gets made at the top and by the time it makes it down to parents, it is either outdated or no longer makes sense. Let’s fix that. We look forward to working with Supt. Carvalho, as we worked with his predecessors,” Schwartz added.